In a new South Africa, those from ethnic minority backgrounds continue to feel marginalised.

Despite living in a post-apartheid nation, the ‘coloured’ community, the term which is still widely used in the nation, continue to face discrimination and complaints of exclusion are common.

While the remnants of the system were swept away a quarter-century ago, a sense of injustice has persisted to this very day.

South African mother from the ‘coloured’ community Dalene Raiters, who lives with her family in the township of Eldorado Park, an outlying suburb of Johannesburg, said: ‘It is all about the blacks. The ‘Rainbow Nation’ is a big lie! 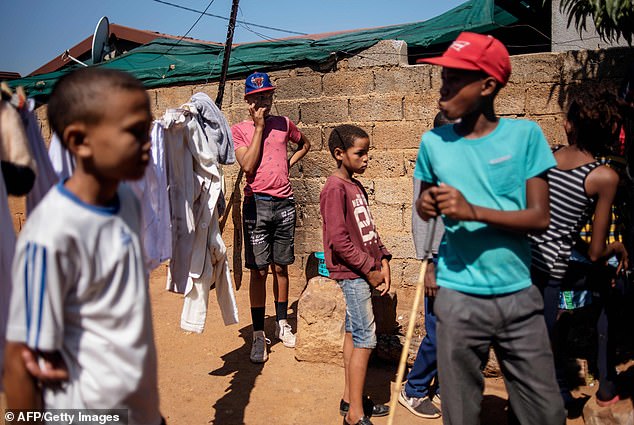 Children belonging to the ‘coloured’ community of Eldorado Park, South Africa,  play in an outside yard. Twenty-five years after the fall of apartheid, members of the community continue to feel marginalised in their own country 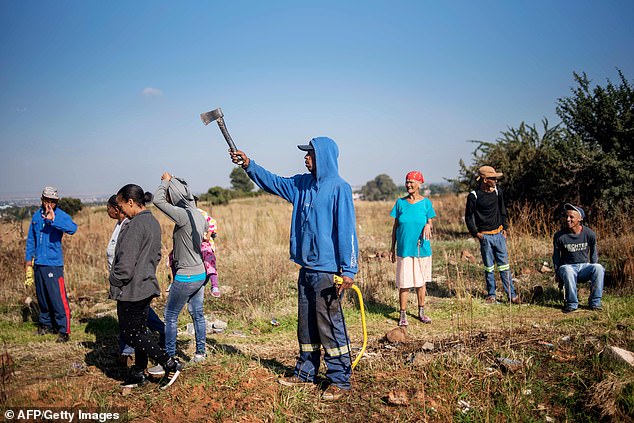 A person in the ‘coloured’ community of Eldorado Park raises a hatchet during a land grabbing action on the outskirts of Johannesburg. The community continues to feel a sense of injustice in a new South Africa 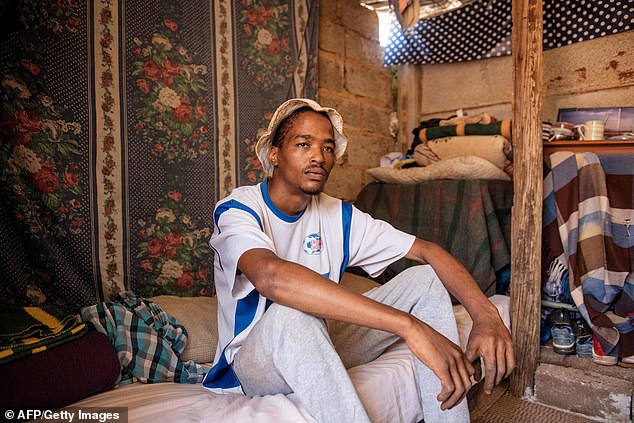 ‘We are not part of this country. We were marginalised during the apartheid and even now.’

In total, nine people- soon to be 10 with a baby due- live in the property, which has a small bedroom and a hut in the yard.

Elizabeth applied for social housing to ease the squeeze 17 years ago and failed. She is convinced it is because of the colour of her skin.

Apartheid legally divided South Africans into groups of whites, blacks, Indians and ‘coloured,’ a term meaning people deemed to be of mixed race.

The ‘coloured’ community itself also comprises of several ethnic groups, notably including the San (bushmen) and Nama -both indigenous to southern Africa.

They are often referred to as the country’s ‘first nation,’ according to Keith Duarte, a representative of the community living in Eldorado Park. 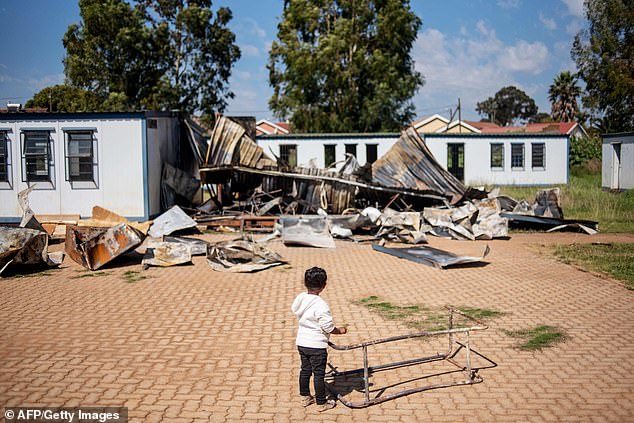 A young child belonging to the community of Eldorado Park stands in the courtyard of Oakdale Secondary School, where several classrooms were destroyed during a student strike on April 15 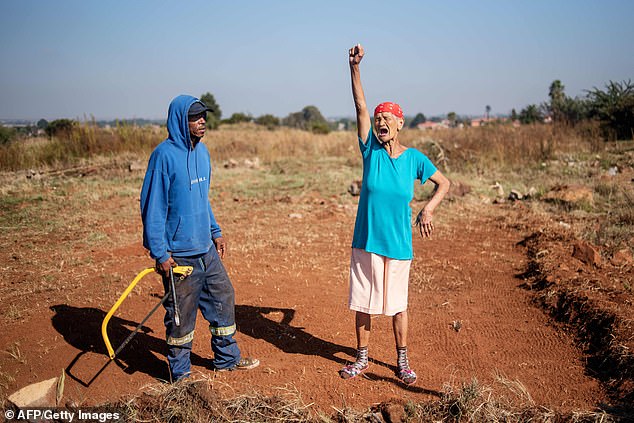 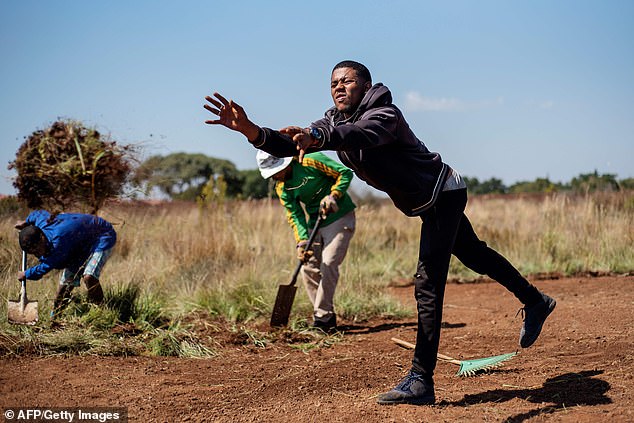 Community members gather in a plot of land to prepare a clearing on April 18. While aparthied  divided South Africans into groups of whites, blacks, Indians and ‘coloured’, many ethnic minorities continue to feel this division

In 1994, when the ruling African National Congress (ANC), spearhead of the anti-apartheid fight, was propelled to power, ‘we all felt that the ANC would represent us, would be inclusive,’ he said.

‘It was the biggest mistake ever… We need to be treated equally,’ he insisted.

In the down-at-heel Eldorado Park township, where the traffic lights sometimes show amber and red at the same time, the small brick homes offer an illusion of comfort. es.

Chesney Van Wyk and his partner live in a hut with just three square metres (30 square feet) of floor space.

The couple share a small mattress and use a small peach tree behind the door as a bag rack. 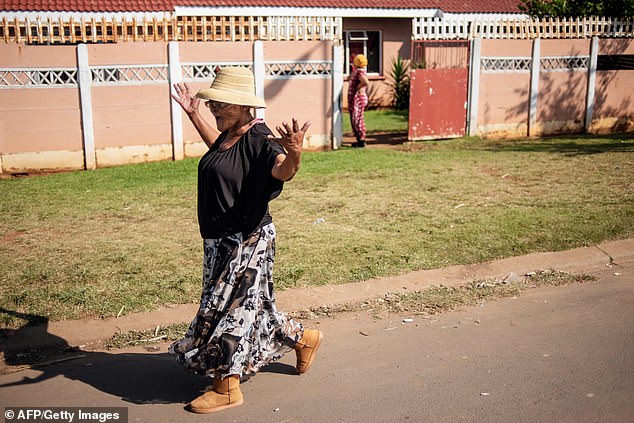 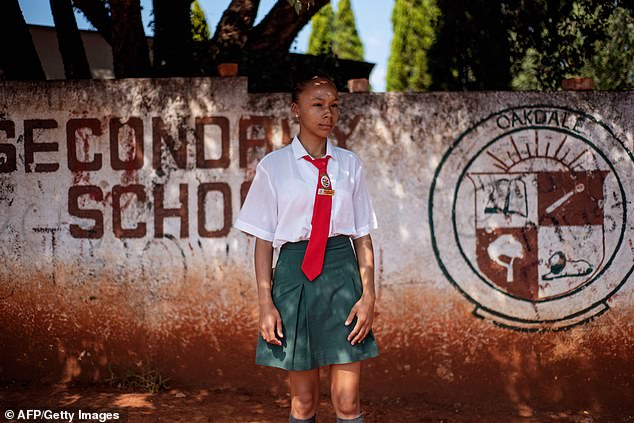 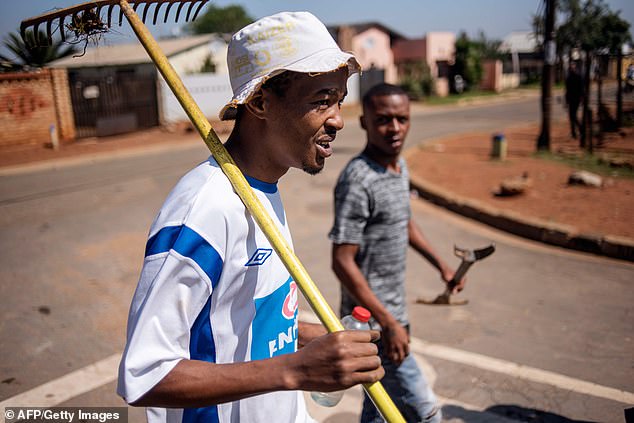 Mr Van Wyk makes ends meet thanks to the small jobs the neighbours give him.

But today he was focused on another task.

Along with dozens of other nearby residents toting picks and shovels, Mr Van Wyk cleared a vacant plot of land before marking out locations for their future homes with branches.

He said: ‘We are claiming this land. We know it is illegal but every time we apply for a (social) house, we need to fill up some documents and they never get back to us.

‘For us it’s like we are the forgotten sheep.’

Violet Bouwers, a woman in her fifties who was also helping to clear land, said:  ‘They say we are nothing. We are b******s. We are not white, nor black.’

Local youths have limited job opportunities and many have turned to drugs.

In the township, a hit of highly-addictive crystal meth sells for 50 rands ($3.20) and has ravaged many lives. 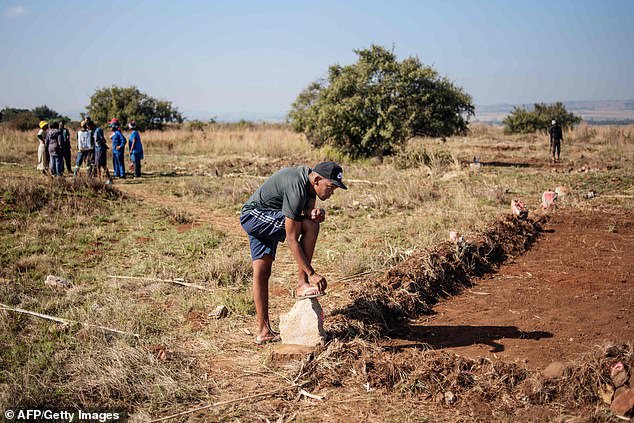 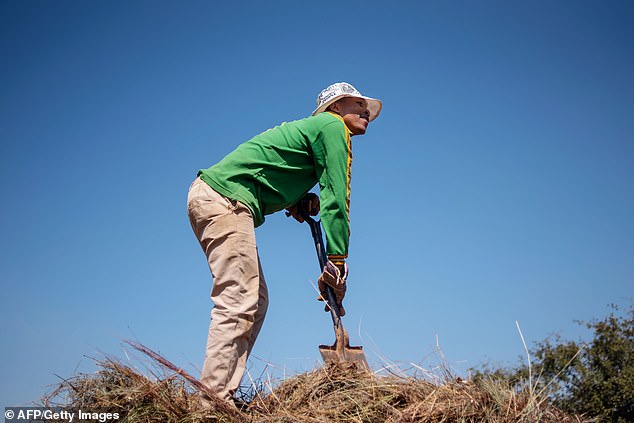 Member of the community Marlin du Preez, 35, clears a plot of land during a land grabbing action

Dereleen James of the Yellow Ribbon Foundation which fights drug abuse said that in April three mothers made criminal complaints against their addicted children for attempted murder and domestic violence.

Ms James said: ‘She could not handle it anymore.’

Patients young and old insist they are in their dire situation because of their skin colour.

There are several drug rehabilitation centres in the township where many people see themselves as victims of an unfair system.

Household income among the ‘coloured’ community is twice as high as the black majority who make up 81 per cent of the population.

Unemployment stands at 30.5 per cent among the black labour force while it is 23 per cent for the ‘coloured’ community. 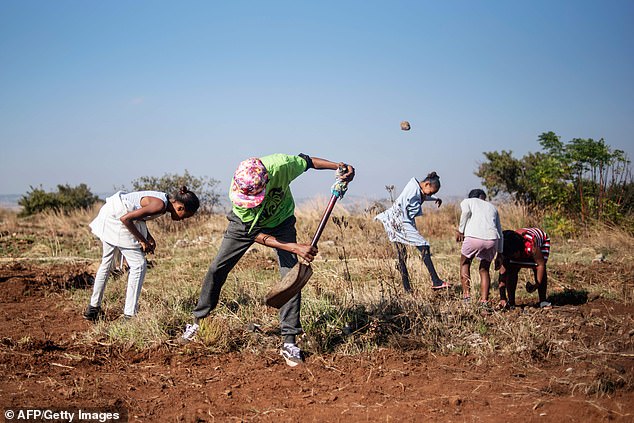 Eldorado Park members make a clearing in a plot of land, as people in the community continue to face discrimination 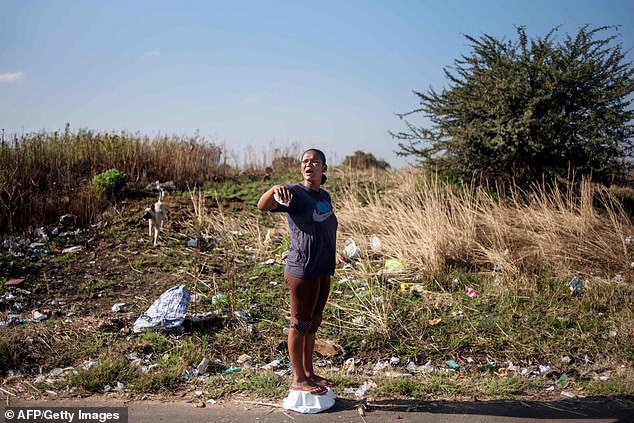 Community member Nicole Ricketts, 19, gestures to catch the attention of others in Eldorado Park as they prepare a clearing in a plot of land during a land grabbing action

Researcher at the University of the Witwatersrand’s Centre for Diversity Studies in Johannesburg Jamil Khan said: ‘Coloured people have always been marginalised under colonial and apartheid rule.

‘Post-apartheid South Africa has not addressed that legacy substantially and aggressively enough.’

The sense of injustice has persisted to the point that several community members lament the fall of apartheid under which ‘coloured’ people had neither the freedom to move around nor vote.

‘The blacks have all the opportunities,’ complained pastor’s wife Janice Jacobs, 49.

‘We were much more comfortable during the apartheid. They would provide us a school pack with all the stationery. We had nurses in the schools. There was order and discipline. If you set a place alight, you would end up in jail.

Manchester pensioner fears his new-build home is CRUMBLING due to weak mortar
Facebook vows to ban graphic images of self harm
Mum who has secret affairs with other men says straying has IMPROVED her 10 year relationship
Revolutionary new treatment to help back pain could be rolled out to 10million people across the UK
Swiss mountain village will sell houses for 82p in bid to breathe life back into picturesque hamlet
Meghan Markle and Prince Harry have tea with Archbishop Desmond Tutu
Police reveal Streatham terrorist Sudesh Amman was under surveillance for 40 minutes before attack
Detective Constable John Coker, 53, dies in hospital from coronavirus