A mother with an extremely rare tissue disorder has told how she could be internally decapitated at any moment.

Amanda McTaggart, from Mullaghbawn, , suffers from both Ehlers-Danlos syndrome, a rare genetic connective tissue disorder, and trigemenal neuralgia, which is described by the as ‘like having an electric shock in the jaw teeth or gums’.

She has now shared distressing photos of her in extreme pain the conditions leave her in, unable to tend to four-year-old son Ethan. 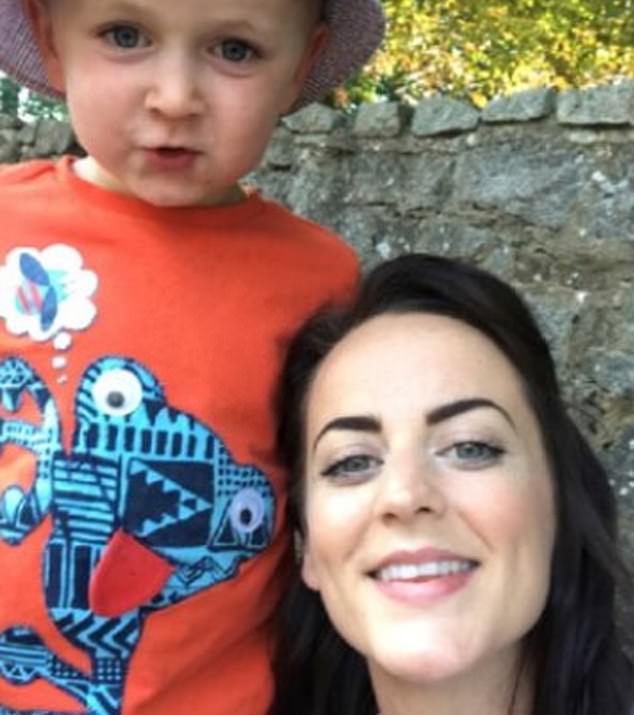 Amanda McTaggart, from Mullaghbawn, Northern Ireland with her four-year-old son Ethan when she is not suffering from the debilitating pains 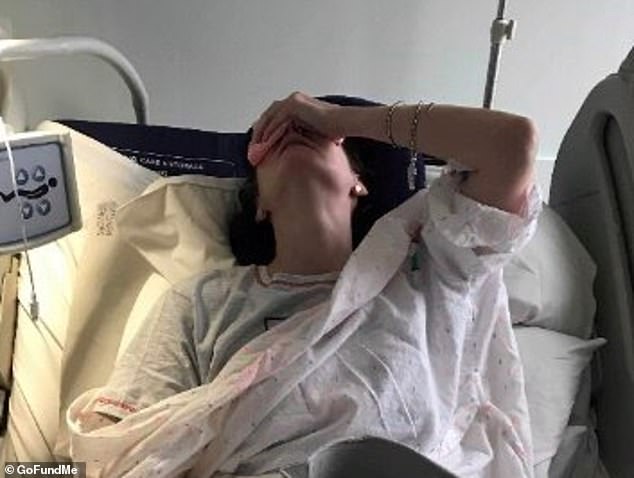 Amanda has a rare genetic connective tissue disorder called Ehlers-Danlos Syndrome. This is a progressive condition with no current cure or specific treatment and risks being internally decapitated 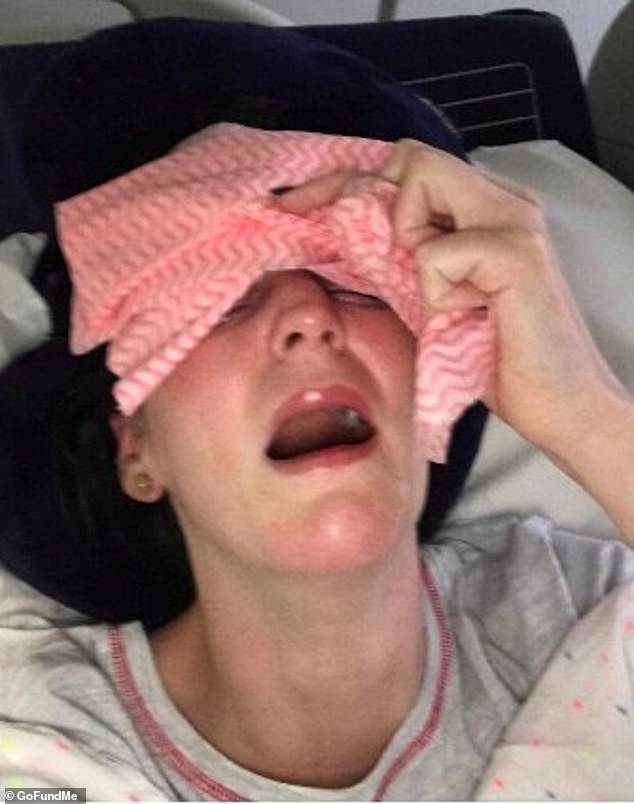 Amanda has to take 36 tablets a day just to cope with the extreme discomfort and excruciating pain of living with the conditions.

As a result of her Ehlers-Danlos syndrome, she has craniocervical and atlantoaxial instability, which risks her being internally decapitated because of joints dislocating ‘daily’.

She also has trigemenal neuralgia attacks, which can occur hundreds of times a day, leading to it being described as one of the ‘most painful conditions ever’.

What is Trigeminal neuralgia? 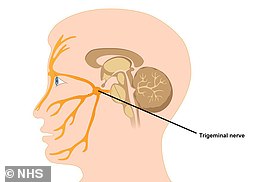 Trigeminal neuralgia is sudden, severe facial pain. It’s often described as ‘a sharp shooting pain or like having an electric shock in the jaw, teeth or gums’.

It usually occurs in short, unpredictable attacks that can last from a few seconds to about two minutes. The attacks can stop as suddenly as they start, and occur regularly over time.

It’s possible for the pain to improve or even disappear altogether for several months or years at a time (remission), although these periods tend to get shorter with time.

See your GP if you experience frequent or persistent facial pain, particularly if standard painkillers, such as paracetamol and ibuprofen, don’t help and a dentist has ruled out any dental causes.

During on emergency hospital visit in January, Amanda spent two days in excruciating nerve pain, which made it hard even to eat.

To manage the pain when in hospital she was put onto a morphine.

However, she is now allergic to the painkiller, along with a long list of other life-threatening conditions, and is currently she wearing a carbon filter mask to help lessen the amount of triggers entering her body.

Amanda also uses a wheelchair and a neck collar to stabilise her spine and neck.

Her family are concerned that she is beginning to run out of options for keeping to horrendous pain at bay.

In a post on the fundraising site GoFundMe, a relative explained the ‘absolutely horrendous’ toll it has taken on their family.

They said: ‘If the level of instability worsens and cannot be managed with a neck brace and specialist physio alone, I will be looking at major surgery overseas.

‘This spinal neck fusion is only undertaken by two surgeons in the world, one in America and the second in Spain. The surgery alone costs £10,000.’

‘I’m sure you can all understand that we as a family want and need to help Amanda as much as possible, as Amanda has a beautiful wee 4 year old boy that she’s not fit to look after on her own at the minute.

‘This is our aim and the aim for Amanda to be able to enjoy seeing her beautiful wee man Ethan growing up.

The family have now set up the  in the hope of helping to cover the medical fees and access the extremely specialist treatments, which is not currently funded by the NHS.

Donations had reached £6,393 at the time of writing.

What are Ehlers-Danlos syndromes (EDS)

Ehlers-Danlos syndromes (EDS) are a group of rare inherited conditions that affect connective tissue which provide support in the skin, tendons, ligaments, internal organs and bones.

There are several types of EDS that may share some symptoms. These include:

The different types of EDS are caused by faults in certain genes that make connective tissue weaker.

Depending on the type of EDS, the faulty gene may have been inherited from 1 parent or both parents.

Sometimes the faulty gene is not inherited, but occurs in the person for the first time.

EDS can affect people in different ways. For some, the condition is relatively mild, while for others their symptoms can be disabling.

Hypermobile EDS (the most common form) may have symptoms such as loose, unstable joints that dislocate easily, joint pain and clicking joints, extreme tiredness (fatigue), skin that bruises easily, digestive problems, dizziness and an increased heart rate after standing up, problems with internal organs or problems with bladder control (stress incontinence)

However, joint hypermobility is relatively common, affecting around 1 in 30 people. So it’s unlikely to be caused by EDS if you do not have any other symptoms.

There is the Ehlers-Danlos Support UK group – you can also call their free helpline on 0800 907 8518 and find local support groups.

Video captures shark leaping from water close to Cape Cod
American cyclist lashes out after losing world championship to trans woman who won't accept apology
Shocking footage shows terrifying near-miss between a drone and a helicopter over Niagara Falls
Kamala Harris calls for probe into whether Trump ordered Barr to investigate his opponents
Naomi Campbell says she knew Jeffrey Epstein but denies knowledge of sex crimes
Trump demands New York Times staffers involved in 'Kavanaugh smear' story resign at New Mexico rally
Teacher, 32, 'had sex with inmate from juvenile detention center and gave him thousands of dollars'
'I was better looking than Harry when I was younger' says Thomas Markle