legend Magic Johnson was all smiles as posed for photos with fans during a lunch in LA yesterday, seemingly undeterred by the fact he was forced to abruptly quit the Lakers after discovering ‘back-stabbing’ emails shared between executives of the team.

Before his departure, Johnson tweeted ‘The truth will always come to light’ with a smiley face emoji added to the end.

And on Friday, the six-foot-nine former Point Guard seemed to be in high spirits as he dined out with a friend at the Beverly Hills restaurant, Avra, just hours after a report revealing the alleged reason behind his resignation was unveiled.

Johnson was reportedly bcc’d in a chain of emails between Lakers co-owner Jeanie Buss and general manager Rob Pelinka who fiercely criticized his performance as President of Operations.

The emails led Johnson to relinquish his post as one of the most powerful basketball executives in the world. He only took charge of the franchise just over two years ago.

But posing with a beaming smile and issuing the cameras a ‘thumbs-up’ yesterday, the 59-year-old appearing to be enjoying his otherwise unplanned basketball sabbatical, dressed casually in a white t-shirt and blue jeans. 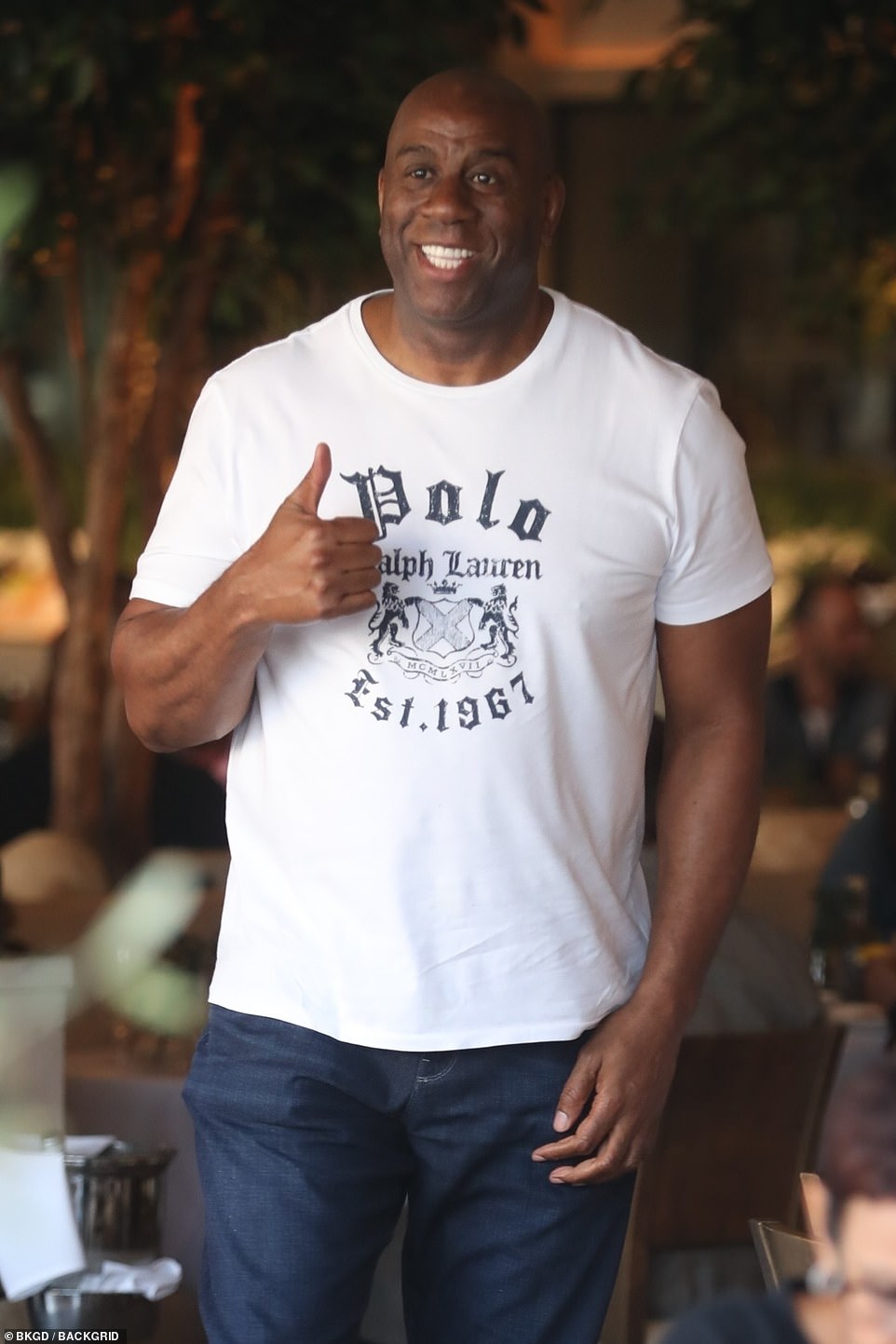 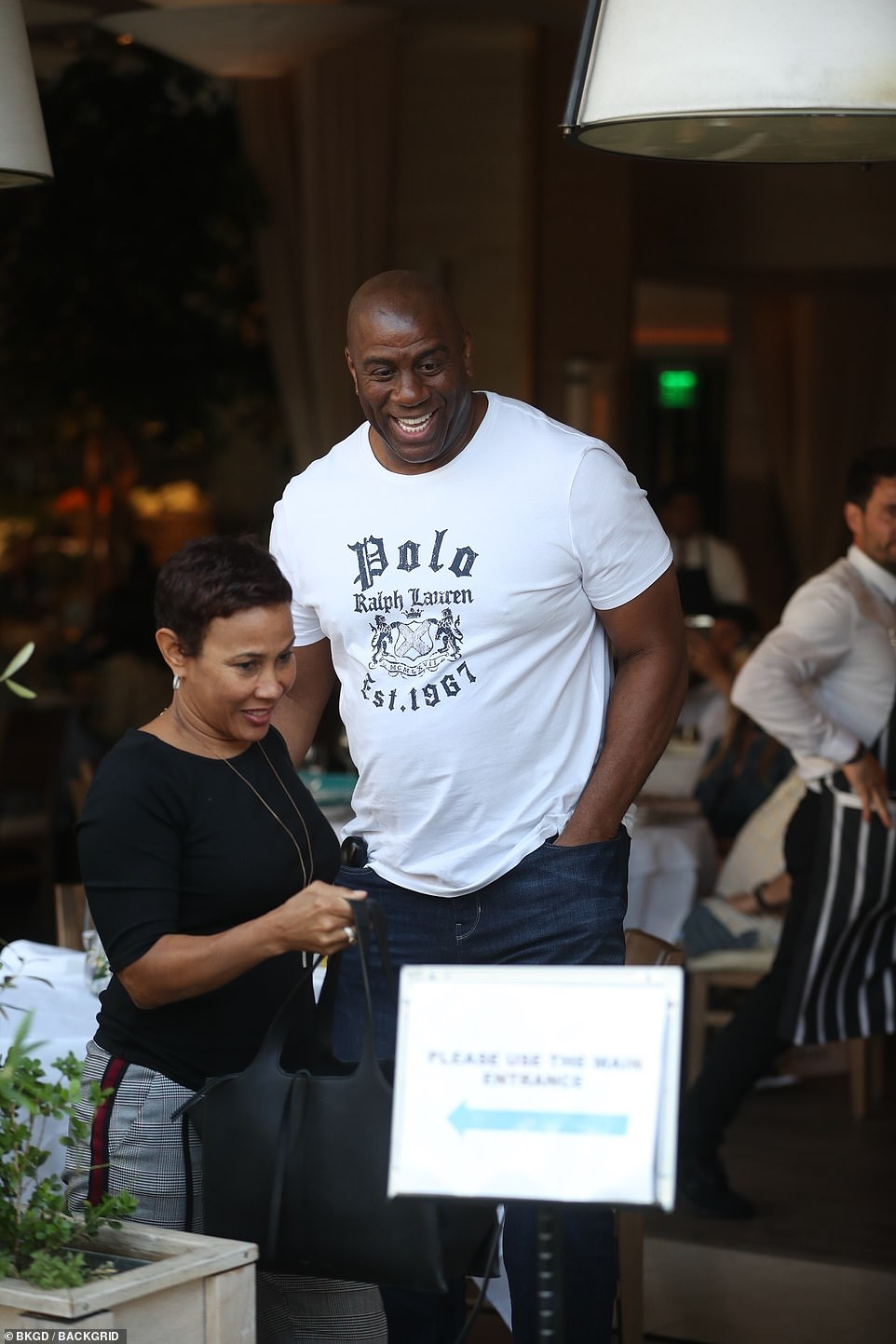 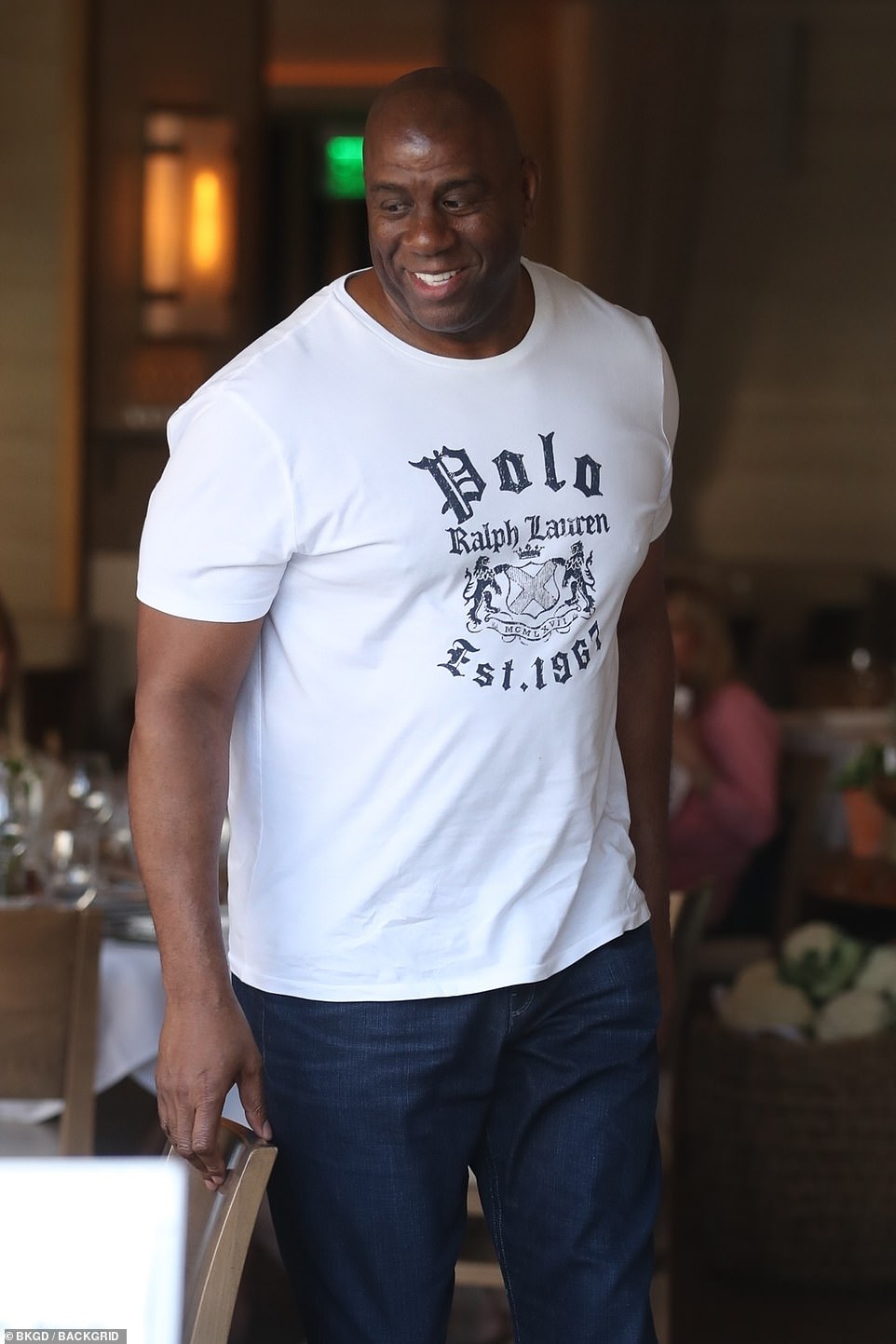 Johnson appears to be enjoying his unplanned sabbatical, dressed casually in a white t-shirt and blue jeans 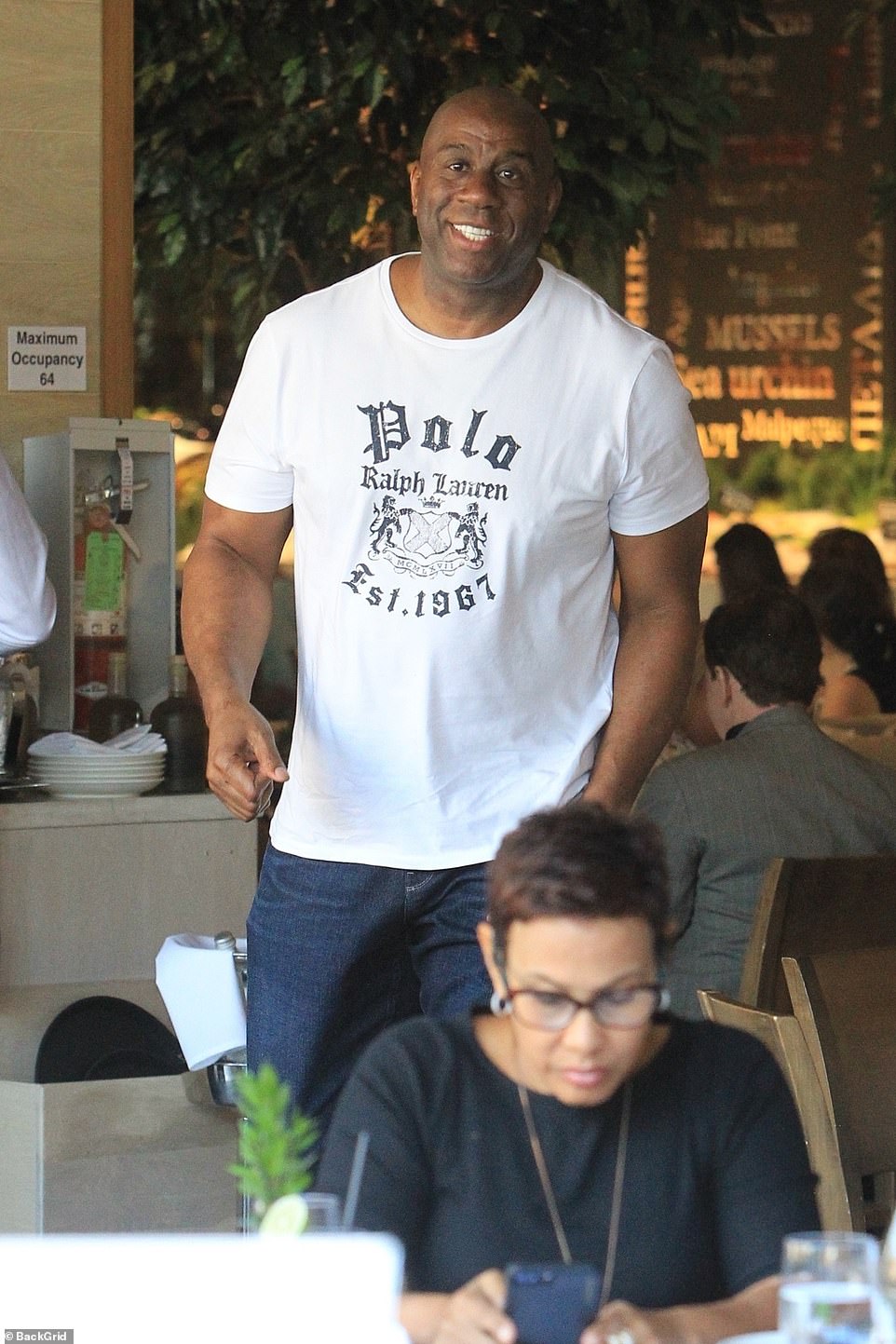 Just hours earlier a report suggested that Johnson had quit the Lakers after being copied in on emails criticizing his performance with the team, shared among executives 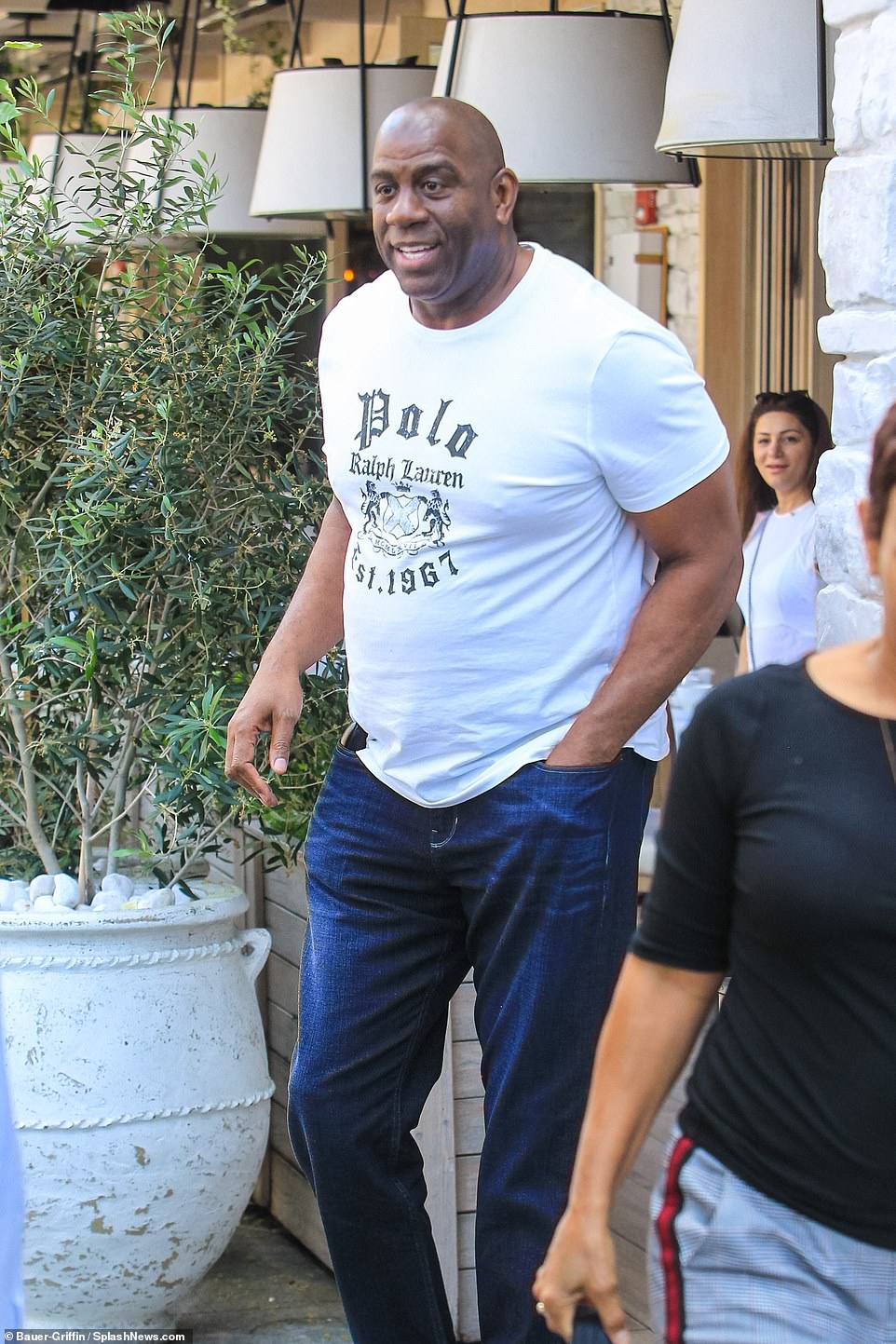 Before his departure, Johnson tweeted ‘The truth will always come to light’ with a smiley face emoji added to the end 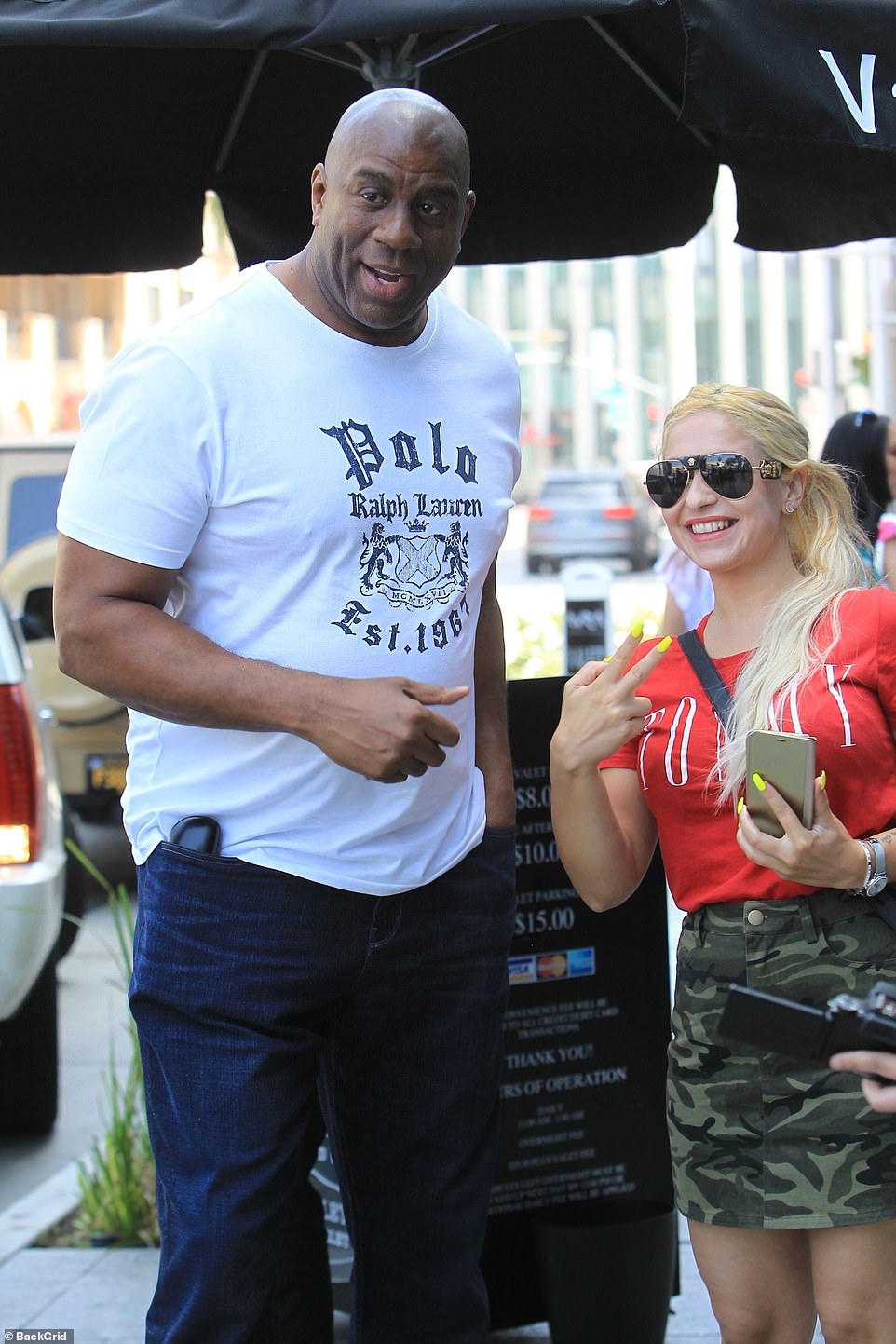 The revelations regarding Johnson’s sudden departure were unearthed on the Colin Cowherd show on Wednesday where Bleacher Report senior writer and Fox Sports 1 analyst Ric Burcher brought the emails to light.

‘My understanding is that there were some emails that were exchanged between Rob and Jeanie…about Magic and about what Magic was and wasn’t doing. They were critical emails,’ Bucher said on the show.

‘And somehow, some way, Jeanie, from what I understand, was CC’ing or blind CC’ing Magic on everything. That was sort of protocol. Standard issue’, he added.

In the exchange between Buss and Pelinka, Buss didn’t reveal any indication she wanted to talk to Johnson about his performance or defend him.

‘So, Magic now is seeing emails from Rob to Jeanie that were critical of what he was doing and maybe most important in all this is that there was no indication that Jeanie was backing Rob up in terms of either going to Magic and letting him know this was going on or going back at Rob and defending Magic,’ Bucher said on the show.

‘When he talked about the backstabbing, to me, my understanding that’s what started it. The fact that Jeanie waved goodbye and said “Thank you for all that you did” was that she didn’t necessarily disagree with what Rob was saying,’ Bucher added.

After reports of the emails came to light Johnson tweeted, ‘The truth will always come to light’ with a smiley face. 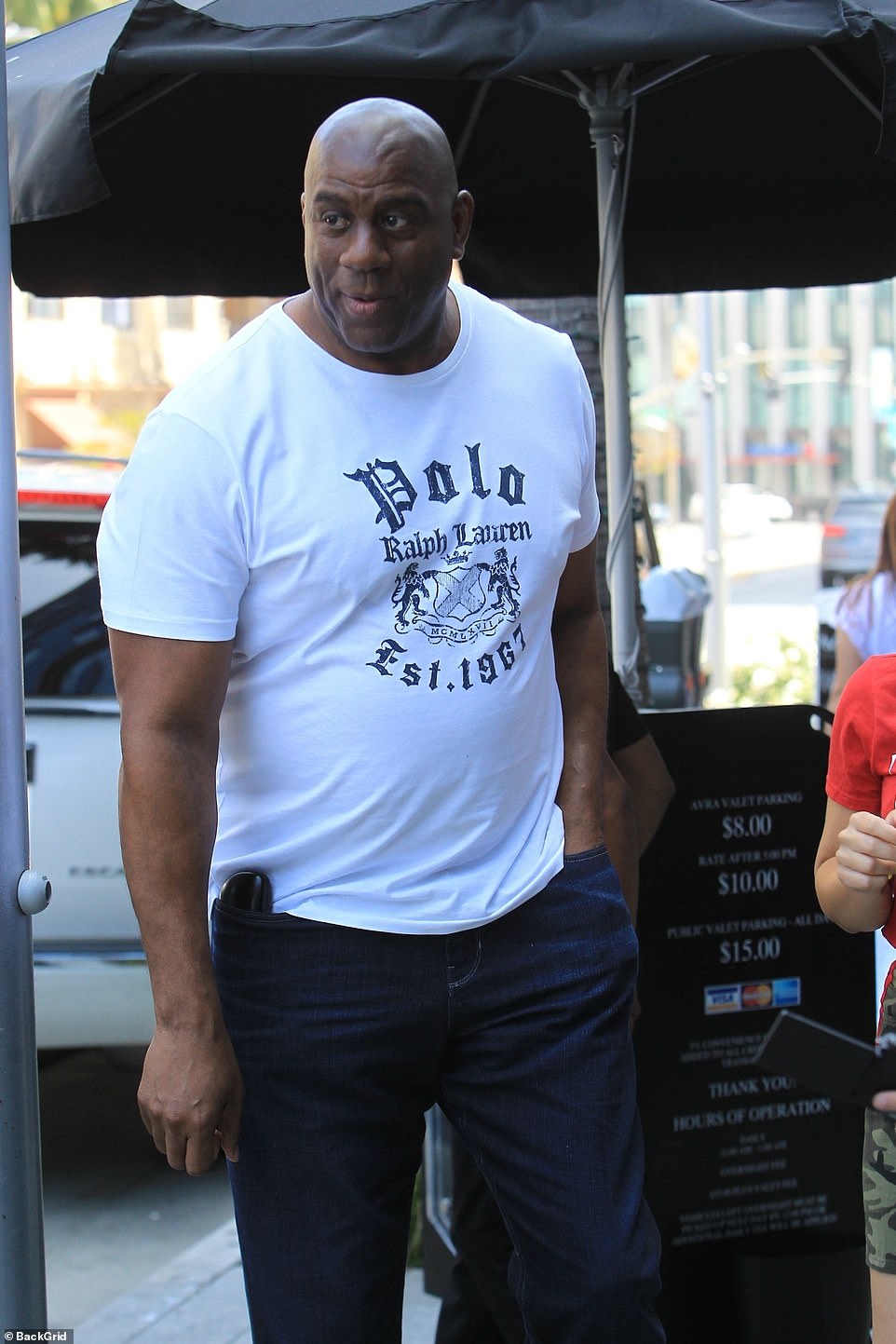 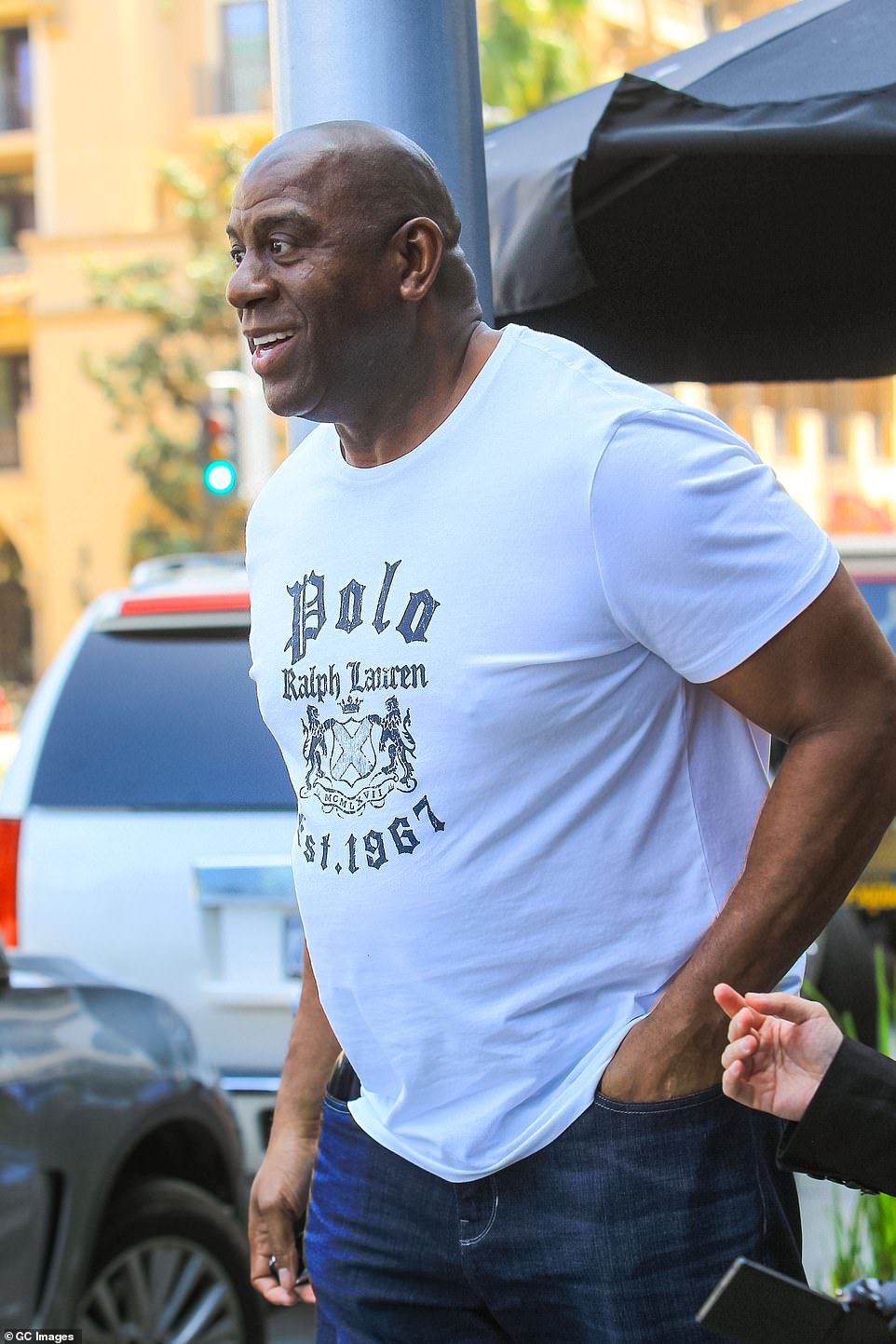 He choked back tears after the final Lakers game this month saying: ‘I want to go back to having fun’ 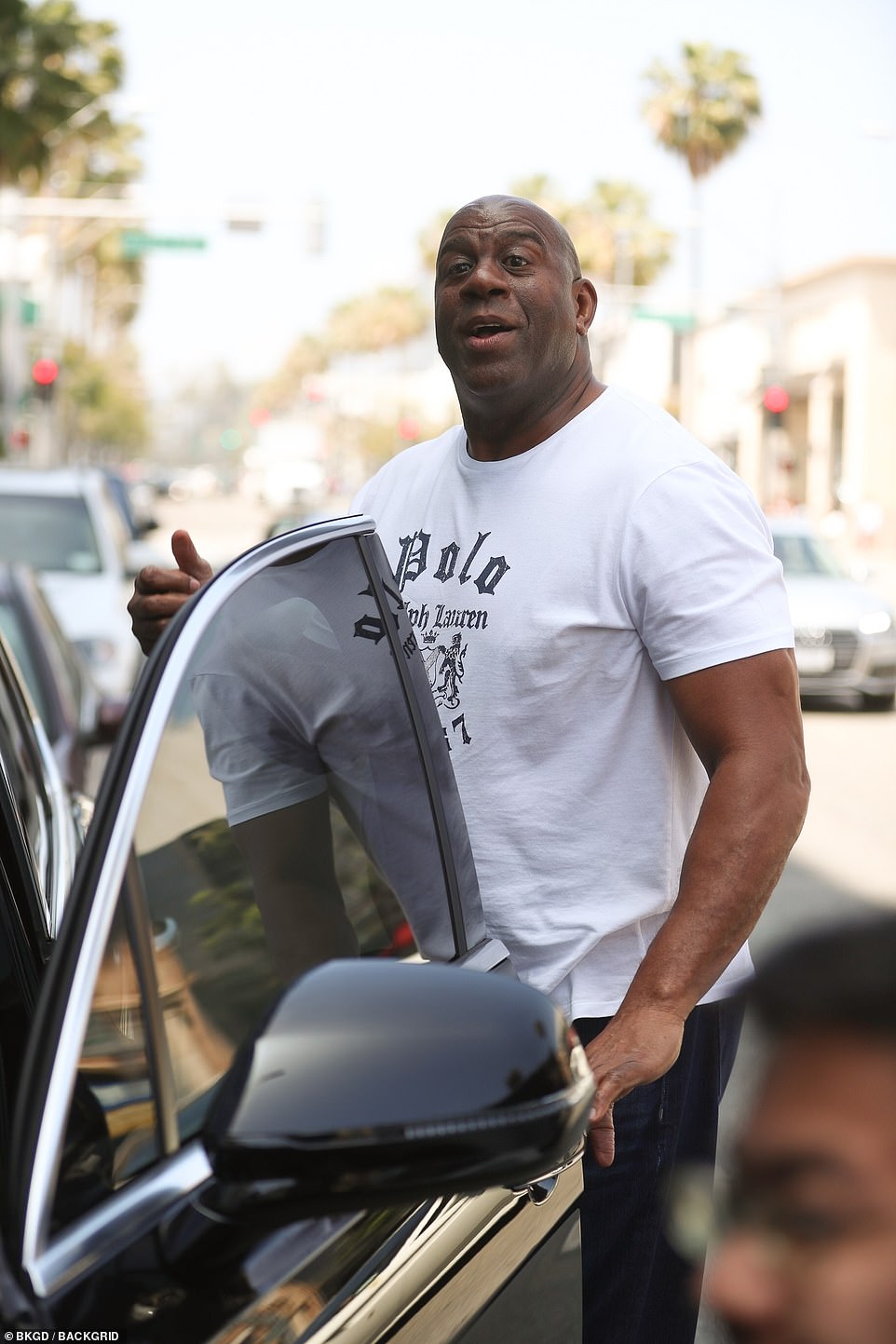 He certainly seemed to be in high spirits on Friday afternoon, early into his sabbatical from Basketball

When Johnson announced his departure from the team, the news came as a shock to the basketball community.

He didn’t tell Buss or Pelinka and announced it in a bombshell statement to reporters just 90 minutes prior to the final game of the Lakers season.

Johnson’s departure from the team was an emotional one and he was seen fighting back tears in post-game interviews.

He cited his desire to return to the simpler life he enjoyed as a wealthy businessman and beloved player and NBA ambassador, as a reason behind quitting.

Johnson also said he is tired of being investigated or fined by the NBA for tampering when he comments on basketball on Twitter or even speaks to another organization’s player. 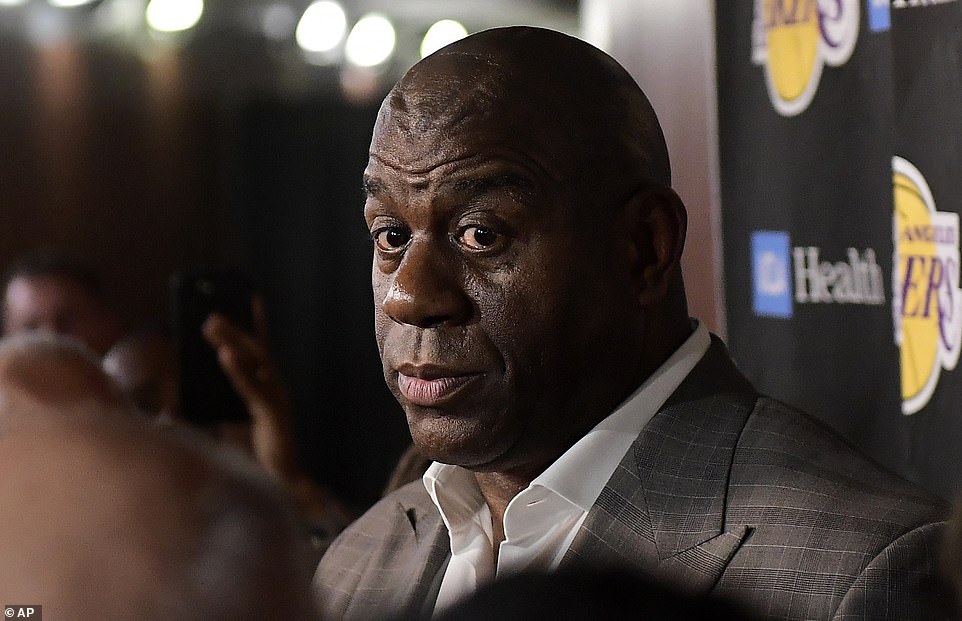 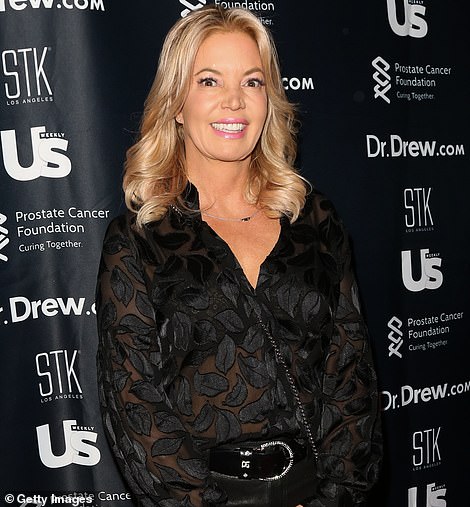 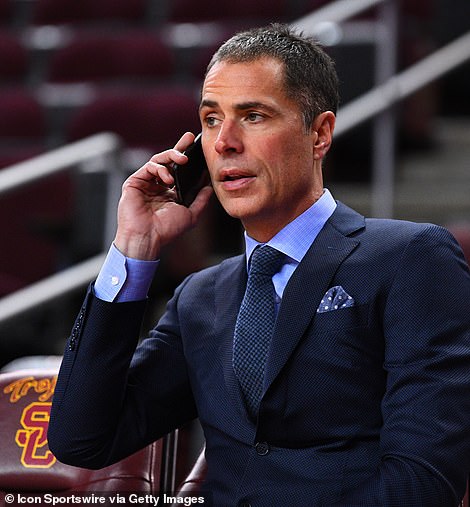 Following reports of the ‘backstabbing’ emails, Johnson tweeted on Thursday: ‘The truth will always come to light’ 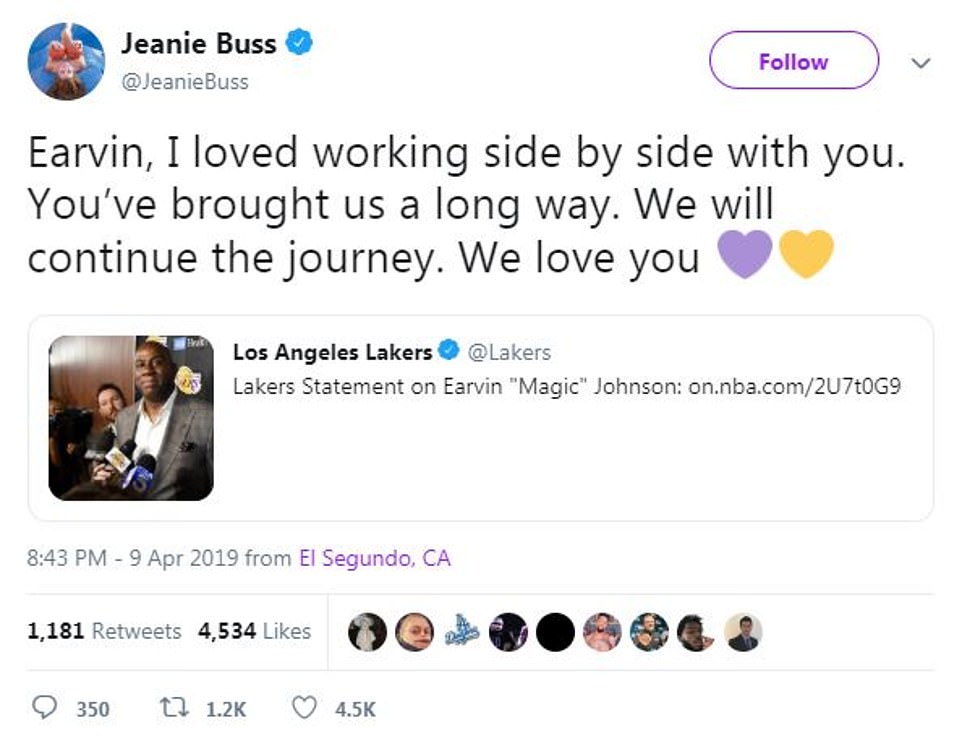 On her official Twitter account, Jeanie Buss tweeted: ‘Earvin, I loved working side by side with you. You’ve brought us a long way. We will continue the journey. We love you.’

‘There is no greater Los Angeles Laker than Earvin Johnson. We are deeply grateful to Magic for all that he has done for our franchise as a player, an ambassador and an executive,’ a Lakers statement said.

‘He will always be not only a Lakers icon, but our family. As we begin the process of moving forward, we will work in a measured and methodical fashion to make the right moves for the future of our organization,’ it added.

Reports said Magic waited for Buss to arrive at the game so they could speak, but she didn’t attend the game.

She tweeted after his announcement, thanking him for his service saying: ‘Earvin, I loved working side by side with you. You’ve brought us a long way. We will continue the journey. We love you.”

Johnson’s reps are yet to respond to DailyMail.com’s request for comment

Father of murdered Colorado lady breaks down in court docket
Argentine boy, 6, will visit his favorite soccer stadium after he tried selling his toys to do so
Bezos' investigator thinks texts were intercepted by government entity
Flight from Manchester to Pakistan is delayed for seven hours
Top diplomat parachuted in to help rescue Harry and Meghan's reputation
Artist credited for starting 'glitter boob' trend sees a 20 PER CENT increase in sales in summer
Photo of inmate enjoying Popeyes infamous chicken sandwich in his cell sends social media into tizzy
Upcoming iPhone 12 WILL support super-fast mmWave 5G despite prior reports, top analyst says