The  high school principal criticized for creating a controversial dress code for parents is refusing to back down from her decision to institute the adult wardrobe rules.

James Madison High School principal Carlotta Outley Brown made headlines in early April after a parent publicly that she had been refused access to the Houston, Texas, school’s campus while attempting to enroll her daughter simply because she was wearing a t-shirt dress and a head scarf.

The complaint prompted Brown to formalize a dress code for parents, which banned adornments including hair bonnets, shower caps and hair rollers, as well as prohibiting clothing such as low-cut tops, leggings, excessively torn jeans, sagging pants and Daisy Dukes. Critics claimed the dress code was classist and insulting. 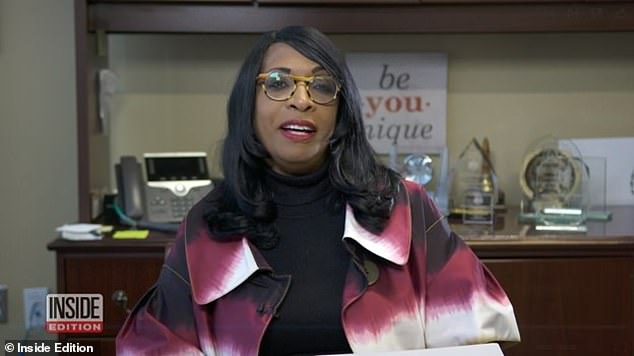 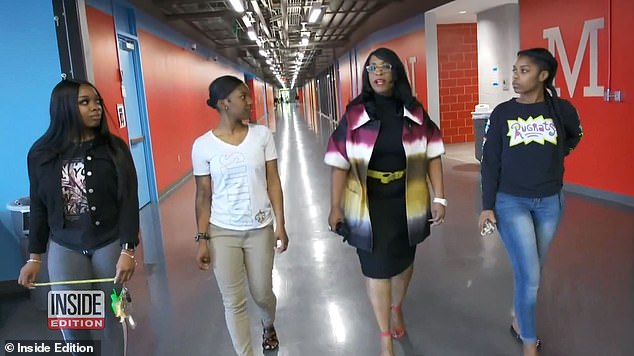 ‘I felt the need to enact the dress code because it was an educational environment, a place of learning,’ Brown told in an interview that aired Friday. ‘When anyone walks in, we have impressionable children and we have to model what we want them to know and learn.’

Brown said that the woman who complained was turned away from the school because she was wearing a ‘nightshirt’ and that it evident ‘that she did not have anything on under her garment.’

Prior to this woman, however, Brown said that she had been seeing an increasing number of parents arriving at the school wearing eyebrow-raising attire.

One mom, Brown said, ‘came in with a see-through shirt and you could clearly see her breasts and her nipples.’ Meanwhile, another mom had her thong underwear visible above her pants.

Brown said the parental dress code rules, which were sent out to school parents in a letter, were necessary because ‘Parents are their children’s first teacher’ and that formalizing the rules would ‘ensure that they know how to conduct themselves.’ 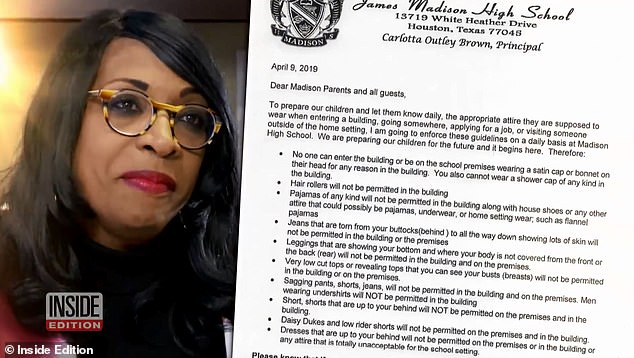 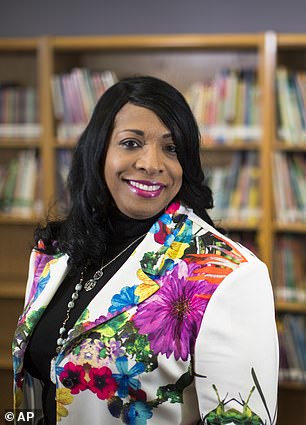 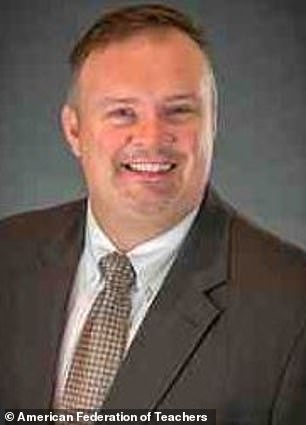 Brown’s (left) dress code was deemed classist by some parents and fellow educators. Zeph Capo (right), president of the Houston Federation of Teachers, was a vocal critic of the ban

She said that these rules were not meant to ‘prohibit them from their expression’ and that they only applied to parents looking to get inside the school. Parents were free to wear whatever they wanted in the carpool lane when dropping off or collecting their kids.

Among the more vocal critics of Brown’s dress code rules was Zeph Capo, president of the Houston Federation of Teachers.

‘Who are you to judge others who may not have the same opportunities that you do? Having a wrap on your head is not offensive. It should not be controversial,’ Capo told the , while also noting that Brown’s bans regarding school moms’ hair was ‘classist,’ ‘belittling’ and ‘dismissive.’

Brown told Inside Edition that the complaining mom’s head scarf wasn’t the problem and said that while there was nothing ‘wrong’ with a hair bonnet, they have a time and a place.

She noted that parents wouldn’t wear hair bonnets to places like church or a night on the town, so they shouldn’t wear them at school, either.

Brown added that its up to adults to show children ‘what is right, what is correct, and what they need to do when they go different places. For example, you don’t wear a swimsuit to school, you wear it to the beach.’

Prior to this posting, she was the principal at a Houston elementary school that previously received one of the country’s highest academic honors. At the time, Brown told a U.S. Department of Education publication that she had been concerned that parents were showing up in ‘inappropriately informal dress.’ The publication noted that she then told those parents that ‘they may not appear at school so dressed and firmly turned them away, as she did any parents using inappropriate language on school grounds.’

Ohio woman with full-face skull tattoo busted for shoplifting, drugs
Missouri woman, 37, 'was acting out a movie scene when she shot dead her boyfriend'
The share of Americans who believe in God without a doubt has dropped 10 points in three decades
'I know a thing or two about diplomacy': Dennis Rodman wants to help the NBA solve its China problem
Bodycam video shows armed cop shooting from a window during New Jersey kosher shootout
Ex-Clinton advisor Carville tells Sanders stop 'lollygaggin around' and drop out after Super Tuesday
Overwhelmed Maryland crematorium no longer allows viewings for bereaved families
Michael Dukakis warns Joe Biden not to take polls too seriously