Former CIA Director John Brennan has accused President of ‘sociopathic ramblings’ after the president accused him of participating in an attempted ‘coup’.

Brennan, now an contributor, was speaking on the network on Friday in response to Trump’s remarks in a Friday night interview with Fox News host Sean Hannity.

‘I don’t think it’s surprising at all that we hear these sociopathic ramblings from Mr. Trump claiming there was this effort to try to prevent him from being elected or to try to unseat him,’ Brennan said.

He was responding to Trump’s remarks on the revelation that FBI lovers Lisa Page and Peter Strzok discussed using briefings with Trump’s transition team after the 2016 election to ‘develop for potential relationships’ and ‘assess’ changes in ‘demeanor’. 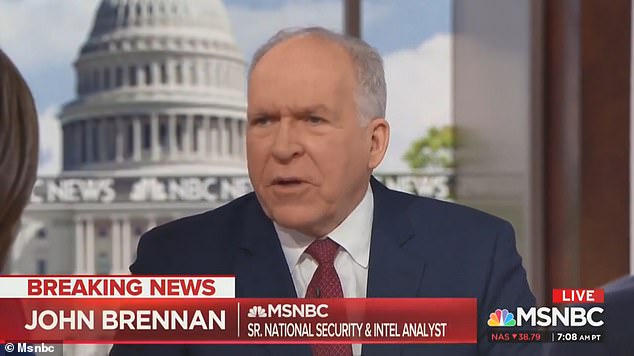 ‘This was a coup. This was an attempted overthrow of the United States government,’ Trump said.

‘These are sick people. These are sick, sick people… It’s inconceivable when it goes to Clapper, Brennan, Comey, these people — I would imagine that some other people may be a little bit higher up also knew about it and maybe a lot higher up,’ Trump said.

Brennan also responded to the allegation from Senator Rand Paul that he had pushed to include British ex-spy Christoper Steele’s ‘dirty dossier’ in a briefing to Trump during the transition. 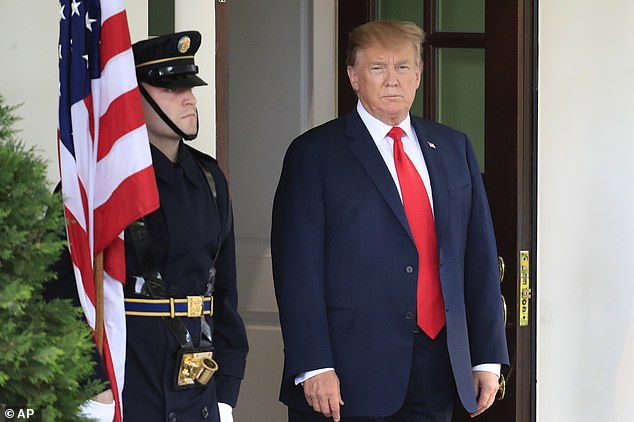 ‘I think it’s far bigger than Watergate. I think it’s possibly the biggest scandal in political history in this country,’ Trump said of the actions taken by intelligence officials during the transition

In January 2017, weeks before the inauguration, Brennan, Clapper and Comey briefed Trump on the dossier, which had been floating around DC media and intelligence circles for some time.

CNN, where Clapper is now a contributor, quickly published a report on the briefing citing an anonymous source. The contents of the dossier were made public by Buzzfeed hours later, using the official briefing as justification for publishing the unverified and salacious claims.

In the MSNBC interview on Friday, Brennan denied that he had pressed for the dossier be included in the briefing to Trump, and blamed the FBI.

‘It was CIA that was pushing not to have it included, not to have it taken into account at all in that intelligence community assessment, Brennan said.

‘This was something that Jim Comey and the FBI thought it was appropriate that Mr. Trump, who was going to become the President of the United States, would be aware of this report that is circulating and how it could be exploited by the Russians or others to try to undermine this government,’ Brennan continued.

Brennan went on to insist that the fault for any Russian election interference lies with the Trump administration, and not with the Obama administration that was in power during the 2016 election.

‘The last administration put out an intelligence community assessment and tried to be as comprehensive and transparent as possible about what the Russians were doing,’ Brennan said.

‘Unfortunately, this administration and Donald Trump refuses to continue to acknowledge what the Russians did and to take steps to prevent them from doing it in the future,’ he said.

Brennan said that he would be willing to testify before Congress about his actions during the presidential transition, as some elected officials have called for him to do.

ME & MY OPERATION: The faucet within the eye that might cease glaucoma sufferers from dropping t...
Vietnamese president Tran Dai Quang dies aged 61 after serious illness
Paris Hilton rocks mesh dress as she tells Jenny McCarthy how she makes $1million for per DJ set
Gary Clark Jr. reveals racism he has faced growing up in America
Ruth Bader Ginsburg wins Berggruen Prize for philosophy and culture
Gwen Stefani fans insist she looks 'unrecognizable' at Grammys and accuse of her plastic surgery
Trumps turn White House into convention stage amid concerns
Social media lights up as celebrities comment on President Trump testing positive for coronavirus