She’s one of the modeling world’s rising figures.

Delilah Hamlin showed off her star-making looks in a cleavage-baring white bustier top that accentuated her trim figure.

The  20-year-old aspiring model was seen Thursday night in West Hollywood as she left the swanky seafood spot Catch. 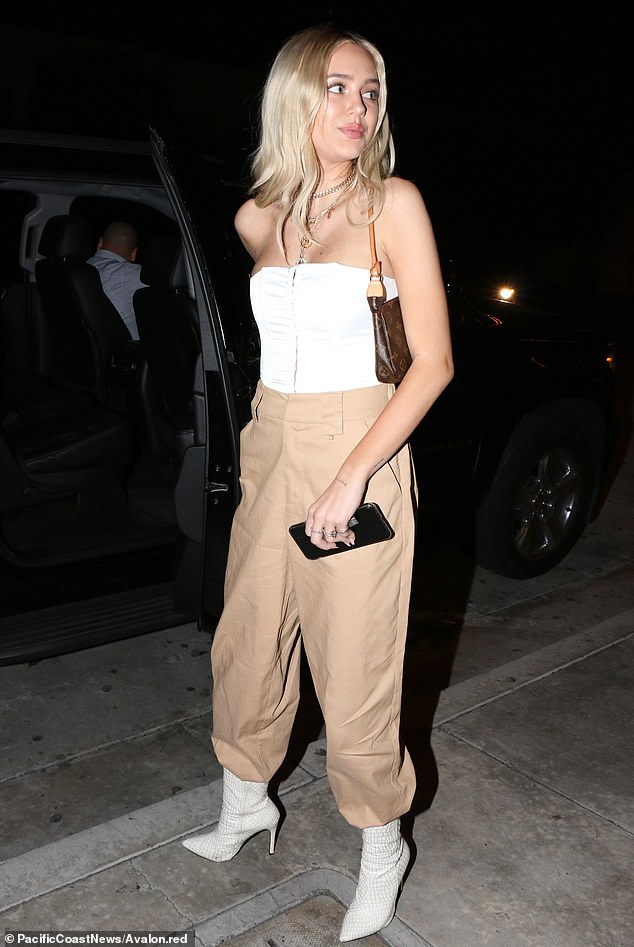 Flaunting it: Delilah Hamlin, 20, showed off her star-making looks in a cleavage-baring white bustier top that accentuated her trim figure

The reality star pair her off-the-shoulder top with a pair of baggy beige slacks.

She tucked the pants into a pair of striking white snakeskin boots, and added a slim Louis Vuitton handbag.

Delilah draped her neck in multiple gold and silver chains, decorated with crosses and other pendants. 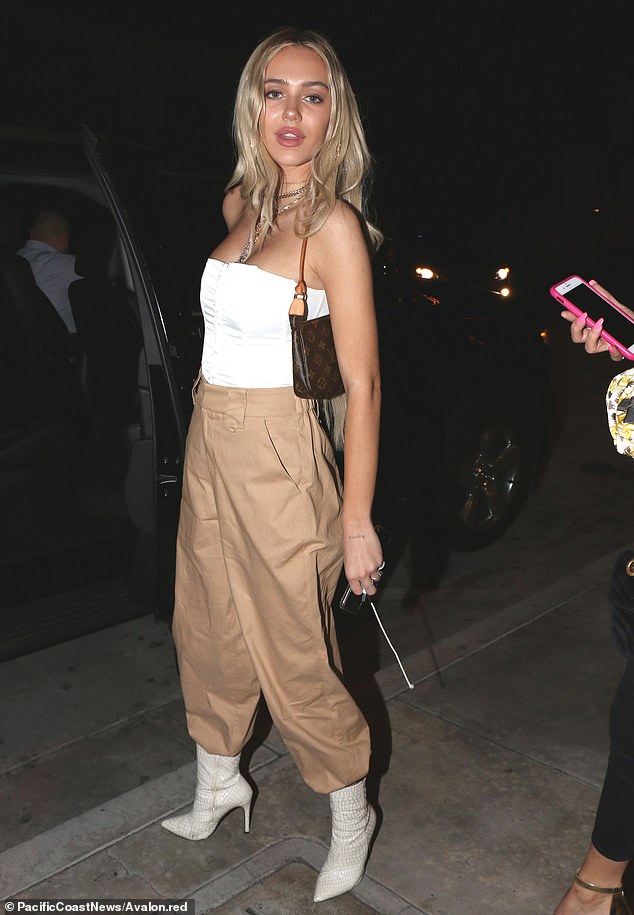 Chic figure: She mixed the white top with a pair of baggy beige slacks tucked into a pair of striking white snakeskin boots 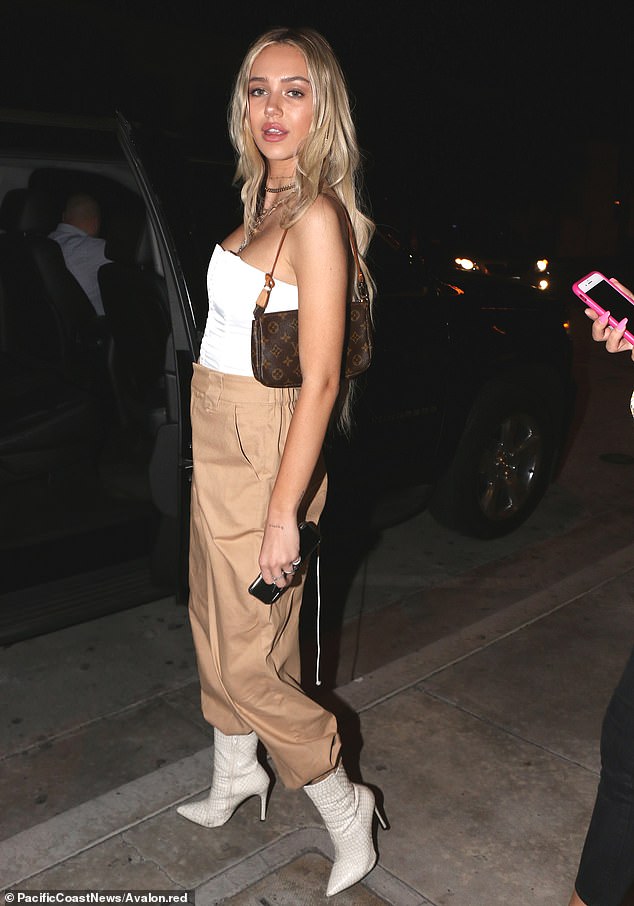 Earlier Thursday, the blonde beauty showed off a different part of her anatomy with a gorgeous beach scene photo posted to her Instagram.

The sultry snap showed Delilah Belle from behind, as she showed off her pert bottom and her slender figure.

She stared longingly at the camera with an intense pout.

Delilah also shared her new tattoo with the world. The close-up didn’t make it clear exactly where the new ink was located, but the short written phrase read: ‘I love my dad,’ referring to her father Harry Hamlin, best known for his starring role in Clash Of The Titans.

She captioned the photo, ‘my latest tattoo I love you @harryhamlin.’

The fashion show fixture has kept her tattoos to a minimum, but she does have a few small text-based designs on her hands and arms. 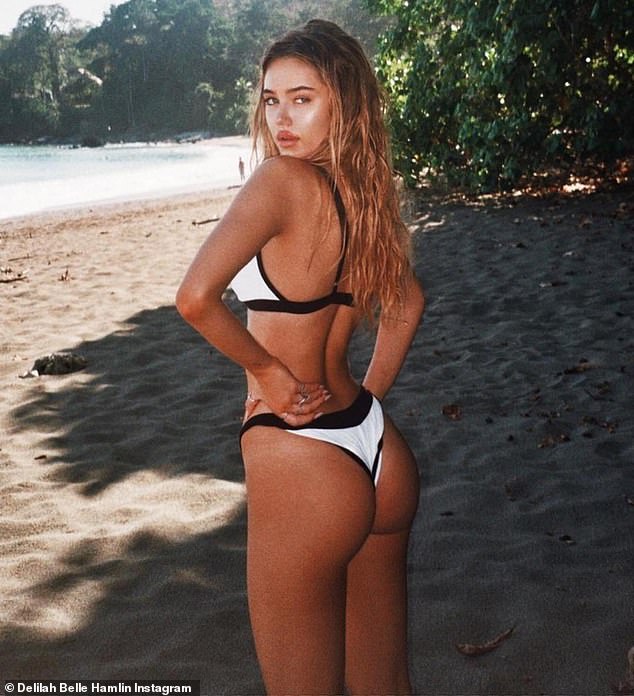 Trim figure: Earlier Thursday, the rising model shared a sultry snap of her pert bottom and her slender figure as she pouted at the camera 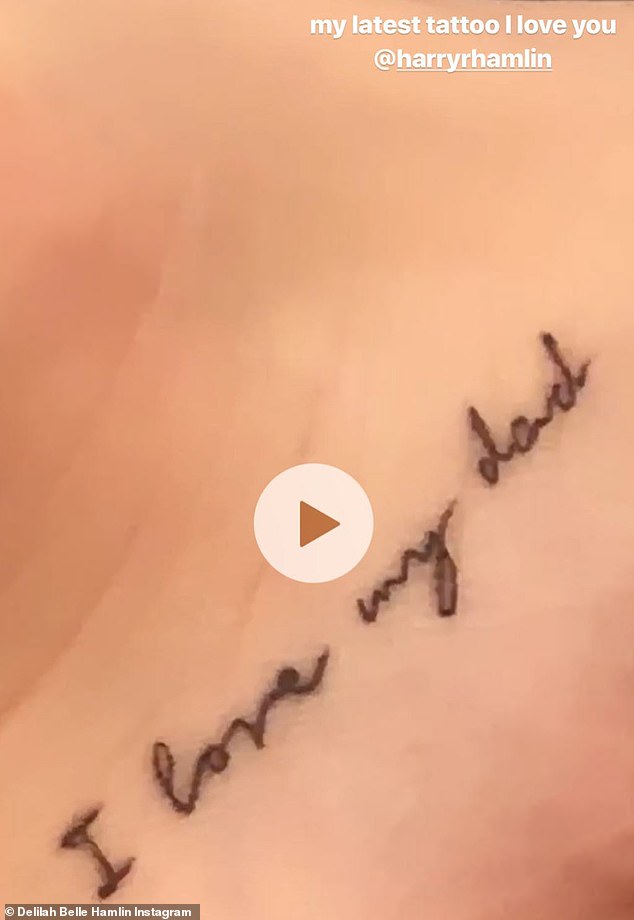 Loving message: She announced her newest tattoo in her Insta Stories, a message of love to her father Harry Hamlin

Delilah comes from a family of beautiful people.

She the daughter of actress and Real Housewives Of Beverly Hills star Lisa Rinna, as well as the ’80s heartthrob Hamlin.

Her sister, Amelia Gray Hamlin, is also a model on the rise. The two beauties have been compared to fellow modeling sisters Gigi and Bella Hadid.

Delilah revealed in an interview with that much of her and Amelia’s fashion sense comes from their stylish mother.

‘I learned, over the years from her, what styles look best on me and which complement me,’ said Delilah, with Amelia adding, ‘Though we have very different styles, we bounce off of each other for ideas and it works.’ 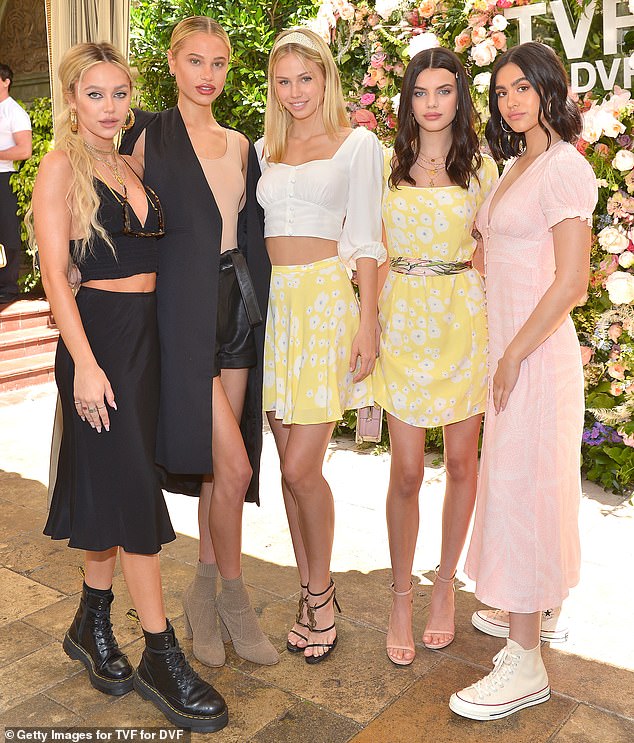 Beautiful family: Her sister, Amelia Gray Hamlin, is also a model on the rise, and the two beauties have been compared to fellow modeling sisters Gigi and Bella Hadid; Delilah (L) and Amelia (far R) pictured Thursday