More than 1,000 people on Twitter have revealed their most bizarre eating habits in a viral thread.

The thread was kicked off by New York-based user Simone de Rochefort on Tuesday, April 23, when she asked her followers what their weirdest eating habits were. The New York based video producer then revealed her own habits, saying she has to have her hair tied up to eat, and that she hates eating in the dark.

Since the was posted, it has received over 2,000 likes and more than 1,000 comments as fellow users have revealed their own bizarre habits with food. 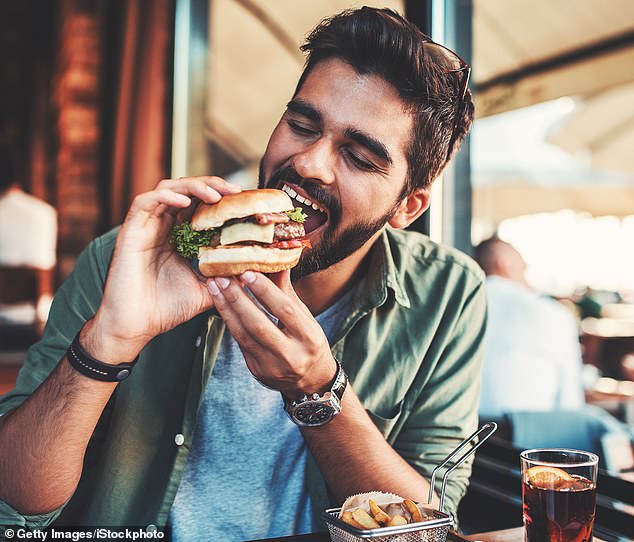 Yikes! Over 1,000 people on Twitter have revealed their most strange habits when it comes to eating food in a viral thread (stock image)

Her series of tweets read: ‘What are your weird eating habits? I like to have my hair up, clean my fingers after every bite if I’m eating Cheetos or w/e, and DISLIKE EATING IN THE DARK. That last one is probably for Survival.

‘Wait now I’m remembering all the times I’ve let Cheeto dust cake my fingers like armor, Cheetos are the exception that proves the rule.

‘I just remembered my most controversial vice, Room Temperature Sushi,’ she added.

And since the tweet was shared on Tuesday, it has become inundated with responses as people share their most bizarre habits with food.

One user said she and her sister have to eat ‘all’ of their fries before eating any other part of their meal.

She said: ‘I have to eat ALL of my fries before i move on to the rest of my meal.. my sister is exactly the same and we don’t know why.’

Another french-fries related habit sees one user arranging her fries into a certain order before eating them, as they said: ‘French fries must be reorganized to lie parallel to each other.’

Woah: Many people responded to the tweet, including one woman who ‘mushes’ up cheese in her hands, and another who arranges french fries into a line before eating them

A different user revealed their own secret, saying they have to eat skittles and M&Ms in a particular pattern.

‘If i’m eating skittles or m&ms, i need to have the same number of all colors at all times. so if i have like 5 red and 3 yellow towards the end, i have to eat 2 red,’ they said.

Meanwhile, another said: ‘I like to put mustard on pizza and uhhh I don’t like coffee unless it’s 50/50 mixed with OJ,’ to which other users were appalled.

‘I mush up small pieces of cheese between my fingers, cheese just tastes better when it’s warm and smushed up,’ another revealed.

Others revealed their strange eating habits, which have more to do with how they eat food rather than what they eat.

One user said: ‘Sadly I can’t eat and watch things at the same time, I have to pause whatever it is while I eat.’

Another said: ‘I have to make sure the last bite is a Perfect Bite, like all the elements together for the ideal note to end the meal on.’ 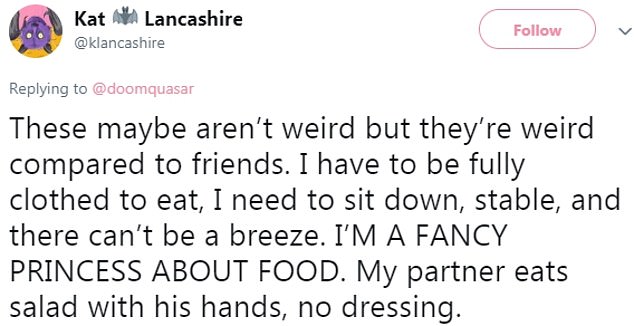 Odd: Others revealed the methods they use to eat food, including one user who always uses the smallest spoon they can find to eat food

A different user said they ‘simply cannot’ eat with their hair down, and they hate eating on front of someone who is not eating at the same time.

One said they need to leave the best part of their meal until last, as they ensure they have the ‘perfect bite’ at the end of their meal.

They explained: ‘I have to make sure the last bite is a perfect bite, like all the elements together for the ideal note to end the meal on??’

Meanwhile, another said they bizarrely need to eat food with the smallest spoon they have.

They said: ‘Anything eaten with a spoon must be eaten with the SMALLEST spoon I can find.’

Similarly, another said: ‘Desserts and puddings are to be eaten with a small spoon, non of this massive dessert spoon malarkey.’

‘These maybe aren’t weird but they’re weird compared to friends,’ another said, ‘I have to be fully clothed to eat, I need to sit down, stable, and there can’t be a breeze.

‘I’m a fancy princess about food. My partner eats salad with his hands, no dressing,’ they added.

Jared Kushner used his helm at New York Observer to delete unfavorable tales for his wealthy buddies
Passenger shaming of travellers on flights you DON'T want to sit next to
Senior Tories 'open talks with Labour' over Brexit
British drones attacking ISIS in Iraq and Syria could be sent to Gulf to protect shipping from Iran
Couple lose battle with rail bosses over surge in noisy trains roaring past their seaside guesthouse
Caitlyn Jenner's mother WON'T be watching her on 'I'm A Celeb'
Oscars: Steve Martin and Chris Rock joke about diversity fail
Piers Morgan taunts Boris Johnson after PM's security asked for him to be kept away from GMB host