Her time on the massively successful sitcom is coming to a close.

Kaley Cuoco was full of tears on Wednesday as she did a table read for the series finale of The Big Bang Theory.

The 33-year-old actress, who plays lead character Penny, has been a fixture on the show since it first aired over a decade ago in 2007. 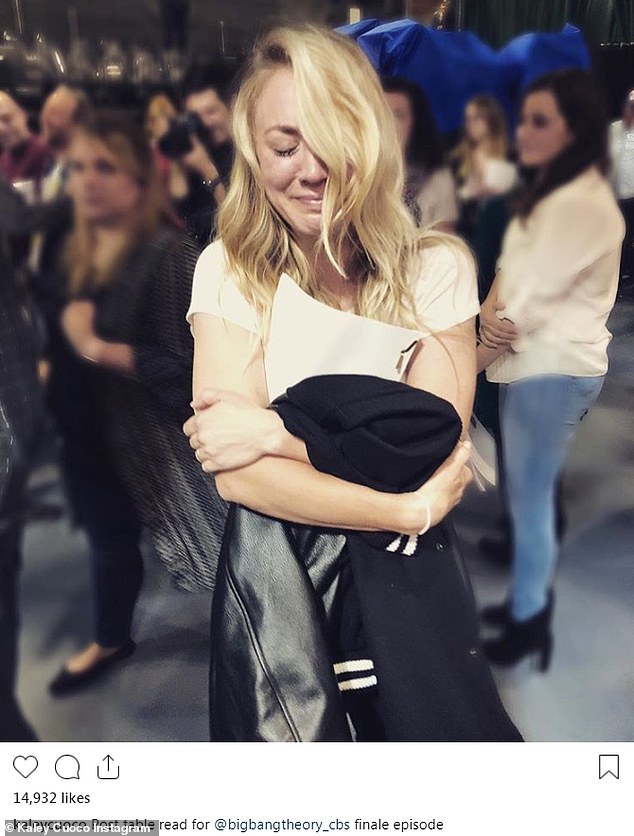 Farewell: Kaley Cuoco, 33, was full of tears on Wednesday, when she posted a photo of herself overcome with emotion after the finale read-through for The Big Bang Theory

The CBS sitcom star posted a tearful photo to her Instagram showing her tightly clutching her finale script and a dark blue varsity jacket.

The 8 Simple Rules actress was visibly overcome with emotion and crying, and her long blonde hair messily obscured half her face.

‘Post table read for @bigbangtheory_cbs finale episode,’ she wrote, letting the picture do most of the talking. 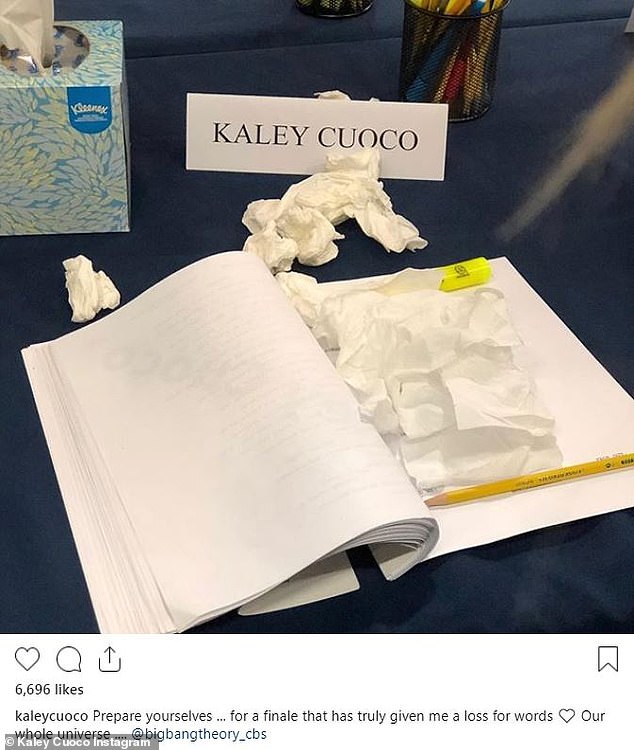 Too many tissues: Another photo from an hour later didn’t reveal any spoilers despite the script lying open, as it was completely obscured by her rumpled tissues

She posted another photo about an hour later showing her script mid-table read.

Despite leaving the pages lying open, Kaley didn’t reveal any spoilers as the open page was completely obscured by all of her rumpled up tissues.

‘Prepare yourselves … for a finale that has truly given me a loss for words ❤️ Our whole universe …. @bigbangtheory_cbs,’ she wrote.

Earlier on Monday, the TV star shared the last page of her final script, which read ‘END OF SERIES,’ and was fixed over a watermark bearing her own name. 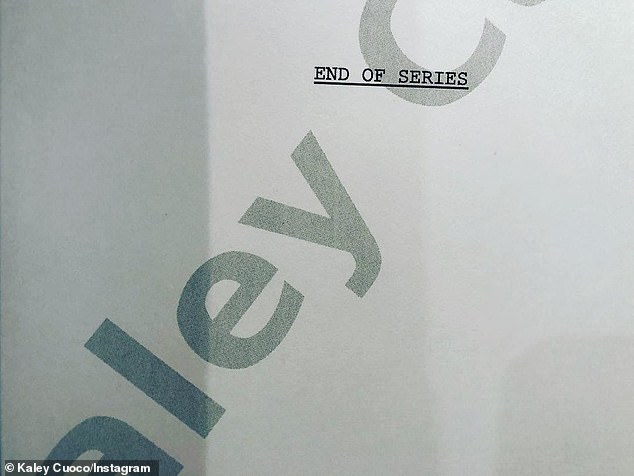 The end: ‘Yea, didn’t sleep,’ she wrote with a photo of the final page of her final script 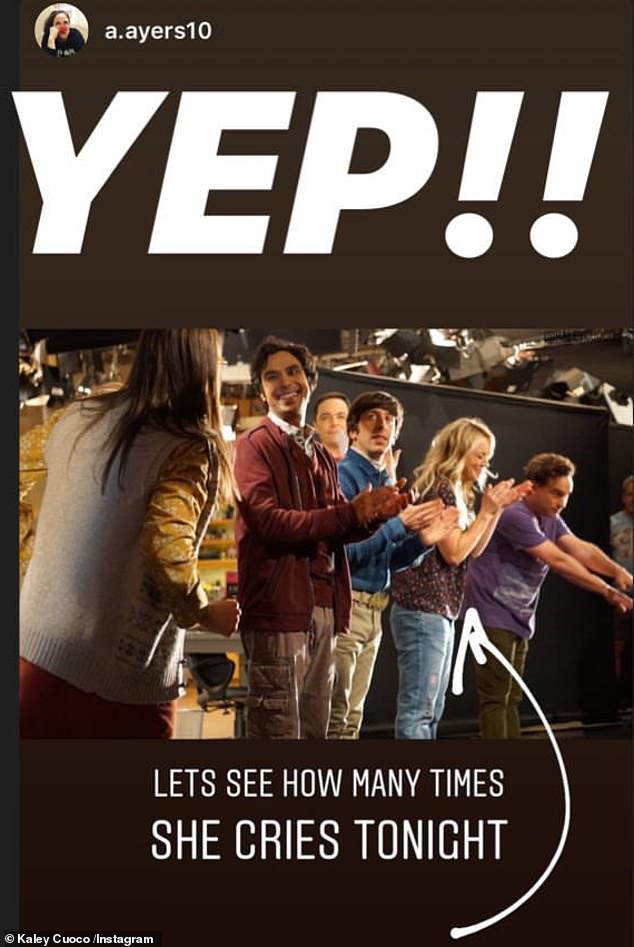 Accurate: She reposted a photo from Alex Ayers, a Big Bang Theory writer, showing the cast at a taping where everyone seemed to be happy except for a crying Kaley

She reposted a photo from Alex Ayers, a Big Bang Theory writer, showing the cast at a taping where everyone seemed to be happy except for a crying Kaley.

‘Lets see how many times she cries tonight,’ wrote the writer, to which the actress added an emphatic ‘YEP!!’

Another photo humorously referenced her recent emotional state, showing her seemingly shouting at her dog, who also had its mouth open.

She captioned it, ‘Late night convos.’ 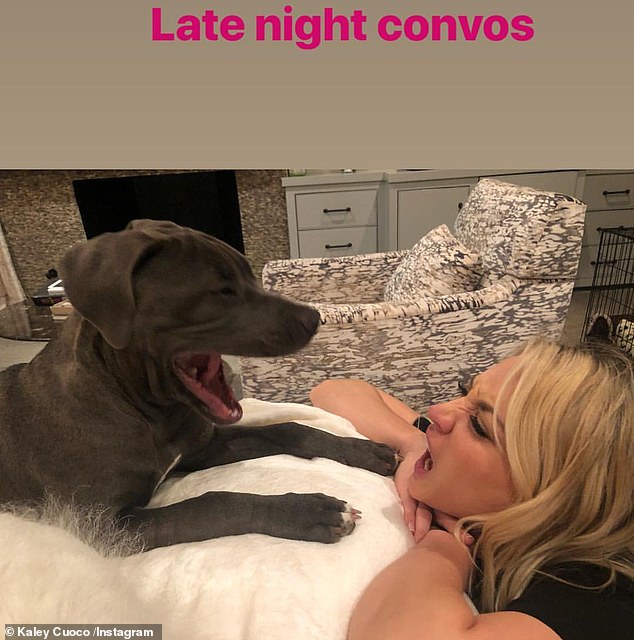 In her feelings: Another photo humorously referenced her recent emotional state, showing her seemingly shouting at her dog, who also had its mouth open

Though she’s been understandably emotional over the conclusion of a series she’s been part of for 12 seasons, Kaley recently revealed that she almost wasn’t considered for the popular comedy.

In an interview with  last month, she revealed that her original audition for the character (then named Katie) was a failure after producers feared she didn’t fit the role.

‘I was too young, which I love saying because I don’t get to say that I’m too young anymore,’ she joked. ‘Then, a year later, I heard they were doing it again, and they brought me back in to read for Penny.’

The 33-year-old star was 22 when she first appeared on the show. 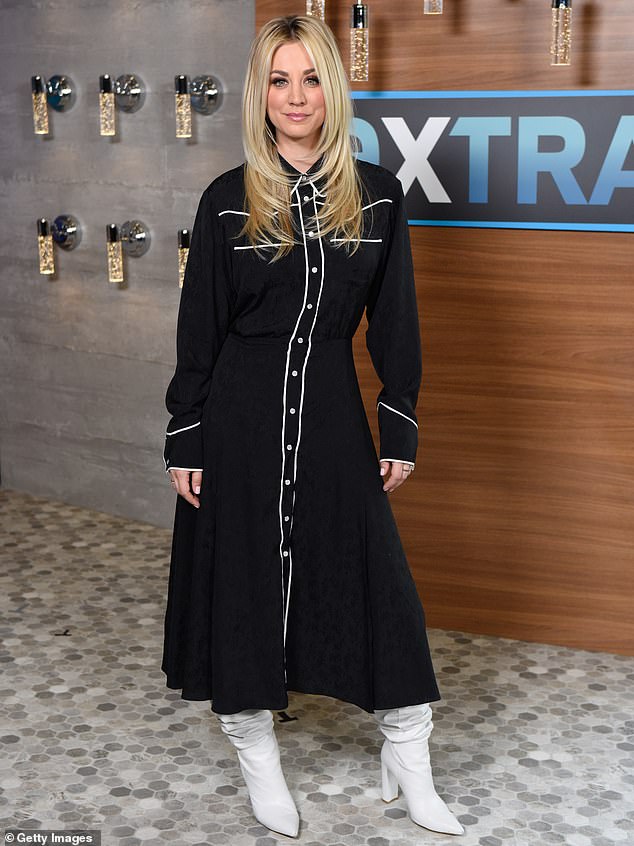 Meant to be: In an interview with Cinema Blend last month, she revealed that Big Bang Theory producers originally thought she was too young for the role, before changing their minds; pictured March 21