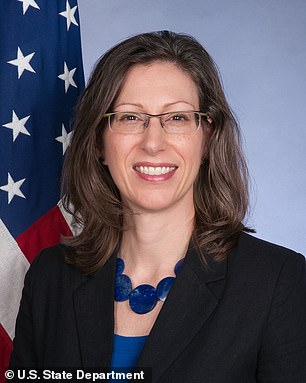 Alaina Teplitz, US ambassador to Sri Lanka, said America believes there are ongoing terrorist plots within the country

America’s ambassador to Sri Lanka says the US believes there are ‘ongoing terrorist plots’ after suicide bombings targeting Christians and tourists on Easter Sunday.

Alaina Teplitz, speaking in the capital Colombo, warned of further attacks on ‘large gatherings [and] public spaces’ adding that ‘terrorists can strike without warning.’

It comes after Prime Minister Ranil Wickremesinghe said on Tuesday that several suspects armed with explosives were still at large.

Defence Minister Ruwan Wijewardene also asked people to ‘remain vigilant’ on Wednesday morning as he admitted that the situation was not fully under control.

‘The investigation is still being conducted by our intelligence agencies, we have made a significant amount of arrests,’ he said at a press conference.

‘We have gathered a considerable amount of information about who was involved in these atrocities and about extremist elements within this country.

‘We will make further arrests over the coming days [and] we can firmly say that within the next couple of days we will have the situation under control.’

Mr Wijewardene said that, so far, 60 people have been arrested, all of whom are Sri Lankan nationals, 39 of whom are still in custody being questioned. 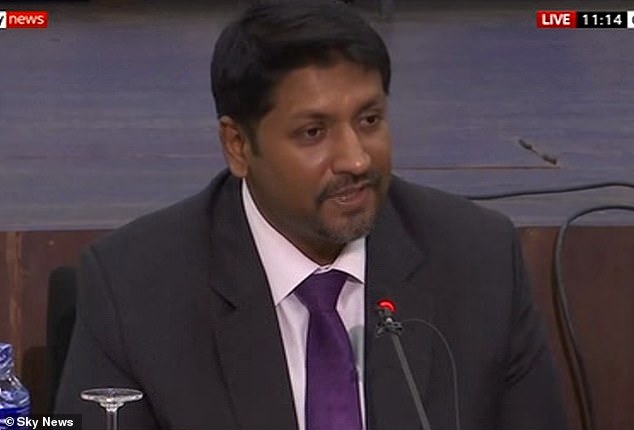 He added that all suspects have some link to the attackers – who he refused to formally identify.

It comes after reports that Indian officials warned of a specific threat against churches in the country two hours before the first bomb blast.

Ms Teplitz said that American intelligence services were not aware of any threat beforehand, but that the FBI is now on the ground providing assistance.

Teplitz also said ‘clearly there was some failure in the system’ for Sri Lanka prior to Easter bombings.

The Prime Minister on Wednesday asked for the resignations of the country’s defence secretary and national police chief over the blunders. 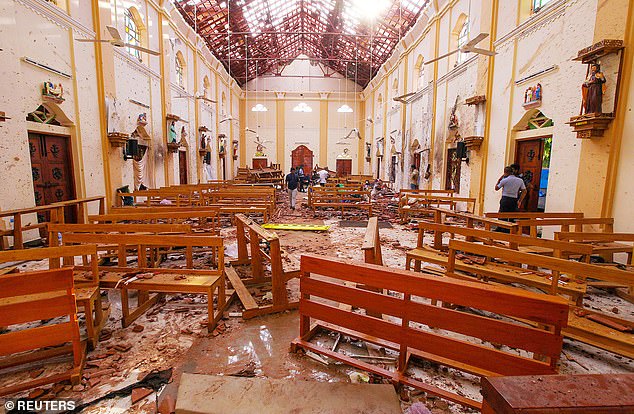 Three churches, three luxury hotels and a guesthouse were bombed on Easter Sunday morning (pictured is St Sebastian’s church in Negombo, which was bombed on Sunday) 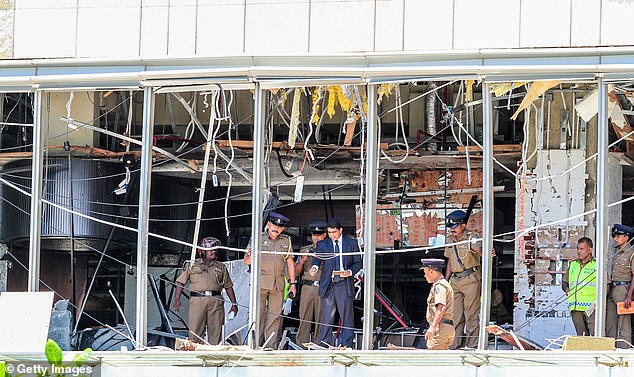 The attacks were designed to target Christian worshippers and tourists and were carried out in revenge for the Christchurch mosque attack, Sri Lankan authorities said

Mr Wijewardene said the death toll from the attacks rose to 359 overnight, 39 of whom were foreign nationals.

Of the dead foreigners, 17 have been identified and their remains handed over to their families.

Mr Wijewardene also revealed on Wednesday that there were a total of nine attackers – including the wife of one suicide bomber who blew herself up as police raided her house – and said eight of them have been identified.

He said the group used to be part of National Thowheed Jamath, who have previously been blamed for the atrocity, but splintered off as their views became more extreme.

Wijewardene described the bombers as middle to upper class men whose families were financially stable and said many of them held degrees.

Some of them had studied abroad, with at least one gaining a bachelor’s degree in the UK before going to Australia for post-graduate studies, then settling in Sri Lanka, he said.

The group were united in their belief that Islam should be the only religion in Sri Lanka, and that was what motivated their attack on Sunday. 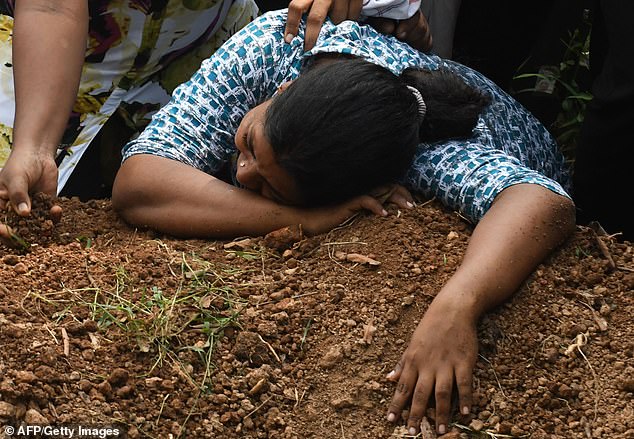 The death toll from the attacks has increased to 359, with 39 foreigners among the dead. The first mass funerals began taking place Tuesday (pictured)

He also confirmed that the leader of the terror cell was among the dead, having blown himself up at the Shangri-La hotel. However, he refused to name the man.

The ringleader has previously been named by the country’s Prime Minister as Moulvi Zahran Hashim, and extremist preacher known to security services for speeches he gave online calling for all non-Muslims to be ‘eradicated’.

Mr Wijewardene also confirmed that a blast at a cinema in Colombo today was a controlled explosion carried out by police.

He said officers had approached a suspicious motorbike outside the cinema and tried to open its storage compartment, but when the lid got stuck they decided to blow it up.