President Donald Trump has used an Oval Office meeting with Twitter CEO Jack Dorsey to complain about his follower count, a source said.

Trump spent much of the Tuesday meeting questioning Dorsey about why he had lost some Twitter followers and suggesting the platform is biased against conservatives, according to a source briefed on the meeting.

Dorsey explained in response to Trump´s concerns about losing followers that the company was working to remove fraudulent and spam accounts and that many famous people, including Dorsey himself, had lost followers as a result, the source said.

Trump lost 204,000, or 0.4 per cent, of his 53.4 million followers in July, according to social media data firm Keyhole, when Twitter started its purge of suspicious accounts. 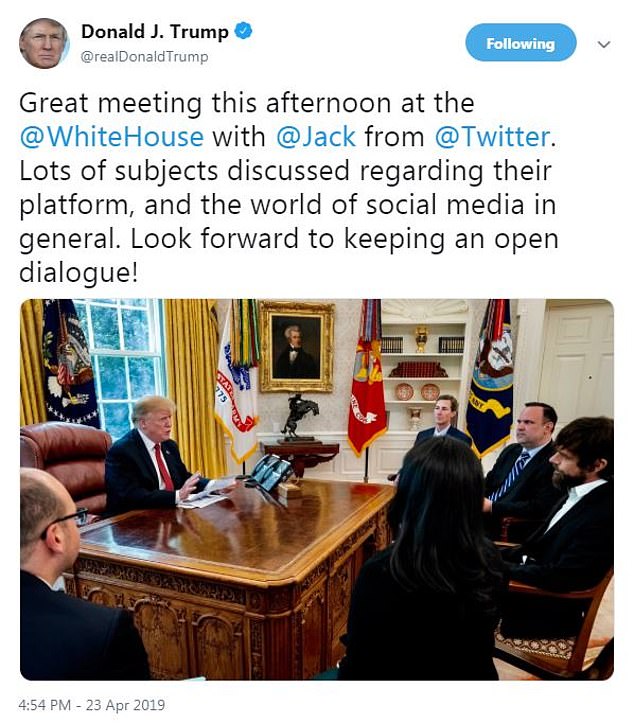 In October, Trump wrote that ‘Twitter has removed many people from my account and, more importantly, they have seemingly done something that makes it much harder to join – they have stifled growth to a point where it is obvious to all. A few weeks ago it was a Rocket Ship, now it is a Blimp! Total Bias?’

Hours prior to Tuesday’s meeting, Trump took to Twitter to write that the social media platform has been ‘playing … political games’ against him.

Afterward, the president tweeted a far calmer message, writing that they had covered ‘[l]ots of subjects’ and that he planned to keep ‘an open dialogue.’

Dorsey, who had not previously met with Trump, replied in a tweet: ‘Thank you for the time. Twitter is here to serve the entire public conversation, and we intend to make it healthier and more civil. Thanks for the discussion about that.’

The president considers Twitter his most important communications megaphone but accused the tech company Tuesday morning of mistreating him after it reported higher than expected earnings.

He cited a Fox Business Network segment in which an analyst had said that ‘the best thing that ever happened to Twitter was Donald Trump.’

‘So true,’ the president tweeted, ‘but they don’t treat me well as a Republican. Very discriminatory, hard for people to sign on. Constantly taking people off list. Big complaints from many people. Different names-over 100 M … But should be much higher than that if Twitter wasn’t playing their political games.’

‘No wonder Congress wants to get involved,’ Trump added, ‘and they should. Must be more, and fairer, companies to get out the WORD!’ 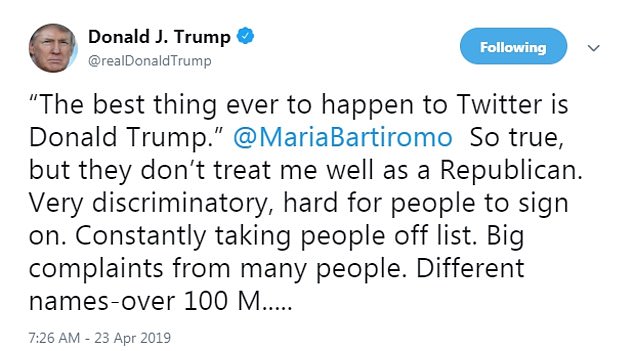 Trump accused Twitter of mistreating him on Tuesday morning, after the tech company reported higher than expected earnings. He revived the claim after watching a Fox Business segment on the company’s financial health

Trump tweeted a photo of the meeting afterward. It shows him and Dorsey, along with White House seniro adviser Jared Kushner and social media guru Dan Scavino. Also pictured is Vijaya Gadde, the company’s Legal, Policy and Trust & Safety Lead.

The tech website reported that the meeting would happen shortly before the White House confirmed it on Tuesday, publishing excerpts from an internal Twitter email chain.

Gadde suggested in one message that the meeting would revolve around ‘the health of the public conversation on Twitter.’

Dorsey defended his decision to accept the White House’s invitation.

‘I believe that conversation, not silence, bridges gaps and drives towards solutions,’ he wrote. ‘I have met with every world leader who has extended an invitation to me, and I believe the discussions have been productive, and the outcomes meaningful.’

‘Some of you will be very supportive of our meeting the president, and some of you might feel we shouldn’t take this meeting at all,’ he added. ‘In the end, I believe it’s important to meet heads of state in order to listen, share our principles and our ideas.’

Dorsey was excluded when Trump held a meeting with tech executives in late 2016 when he was president-elect. 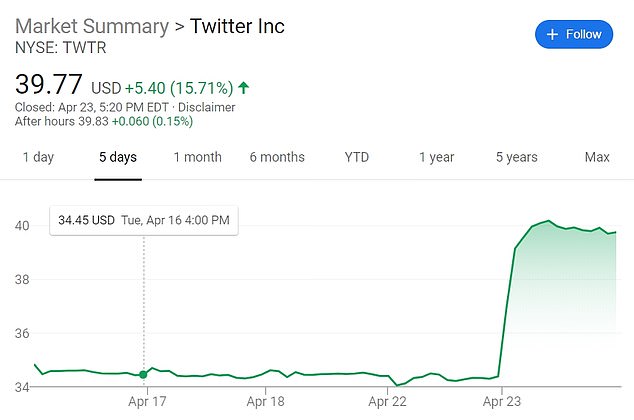 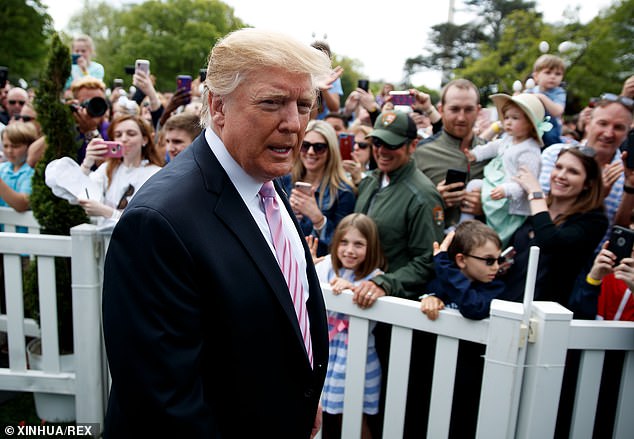 A Twitter spokesperson said late Tuesday in a statement that Dorsey ‘had a constructive meeting with the President of the United States today at the president’s invitation.’

‘They discussed Twitter’s commitment to protecting the health of the public conversation ahead of the 2020 U.S. elections and efforts underway to respond to the opioid crisis.’

It reported $787 million in earnings, a double-digit surge over a projected $776.1 million for the quarter and a 12 per cent increase from this time last year.

The resulting stock rally was larger than expected. The tech company struggled to meet its goals last year after it purged the platform of bots and fake users, amid hysteria over Russian election meddling. 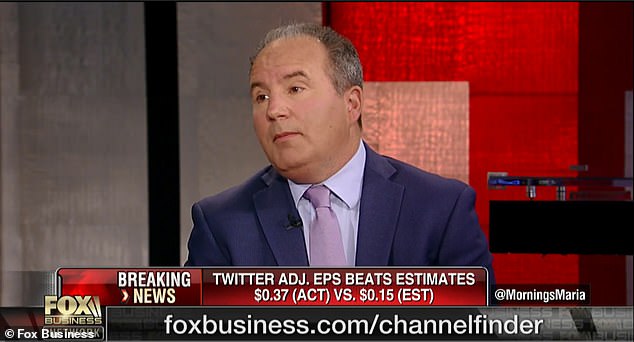 The special counsel’s indictment of 13 Russian nationals who operated a troll farm known at the Internet Research Agency, which used Twitter as a means to interfere in the 2016 presidential election, sparked fresh interest in social media company’s operations.

Dorsey told Congress in September that he acknowledges ‘real-world negative consequences’ of open access to the free platform.

‘We have learned from situations where people have taken advantage of our service and our past inability to address it fast enough,’ he testified.

Dorsey told lawmakers, ‘We’ve made significant progress recently on tactical solutions like identification of many forms of manipulation intending to artificially amplify information, more transparency around who buys ads and how they are targeted, and challenging suspicious logins and account creation.’

He denied claims from Trump and and conservatives biased against the president and his supporters.

‘Twitter does not use political ideology to make any decisions, whether related to ranking content on our service or how we enforce our rules. We believe strongly in being impartial, and we strive to enforce our rules impartially,’ he said in opening remarks.