As Holmes would put it: ‘Elementary, my dear Watson.’ For the manoeuvre yesterday by Labour’s deputy leader Tom Watson — to insist that, in all circumstances, his party commits to a so-called ‘confirmatory referendum’ on — is indeed transparent.

First of all, it signals (in case anyone had failed to notice) that the MP for West Bromwich East is applying for the post currently held by .

Although Watson’s own constituency voted solidly to Leave the EU in the 2016 referendum, a recent internal poll of Labour Party members showed that three-quarters are active supporters of a second referendum and 88 per cent would vote to stay in the EU, given that chance. 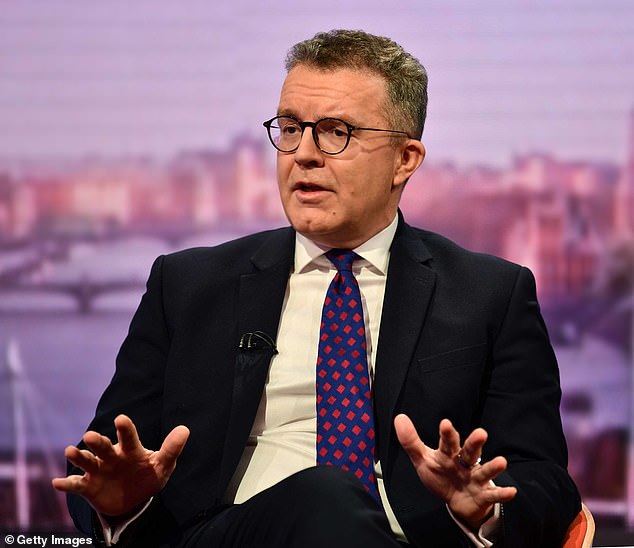 Watson is not speaking to the millions in the country, but to those hundreds of thousands whose votes he would need to succeed Jeremy Corbyn.

The second purpose of Watson’s pellucid plot is to sabotage the talks being held between Labour and the Conservative Government to find agreement over the terms of Britain’s departure from, and future relationship with, the EU.

The one thing that would ensure a collapse of those talks — designed to break the parlimentary deadlock — is Labour insisting that the discussions be conditional on a ‘confirmatory referendum’.

Theresa May and the Conservatives are in enough trouble as it is: to agree to that would set them not just against the overwhelming majority of their own party membership, but also those who voted Tory in the last election. 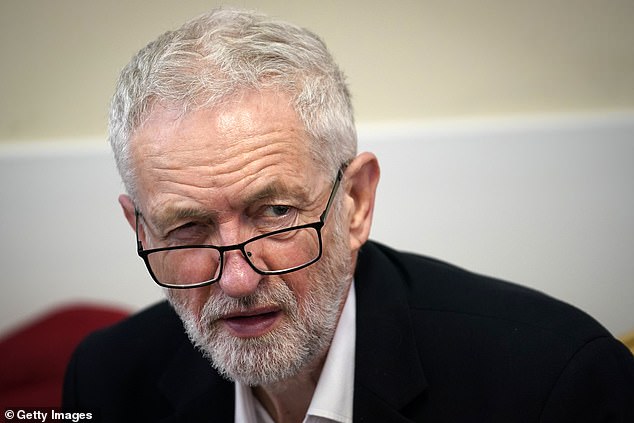 It may be that the odds are, in any case, stacked against such an agreement between Corbyn’s team and May’s. The former have pressed for some sort of commitment to remain in a customs union with the EU, which would cross one of the PM’s ‘red lines’.

Labour’s team also want ‘better protection’ for workers’ rights in any deal made by the Conservatives with the EU (which is odd, since any future Labour government would be able to pass whatever legislation it wanted on this issue).

But if agreement were reached, what would be the point of then calling a referendum with the option to remain in the EU? As Corbyn himself told reporters after the first round of talks with Mrs May: ‘I said this is the policy of our party, that we would want to pursue the option of a public vote to prevent crashing out or to prevent leaving with a bad deal.’

In other words, if an agreement can be reached with May to avoid both those ‘bad’ outcomes, then there’s no need for a referendum on the matter. 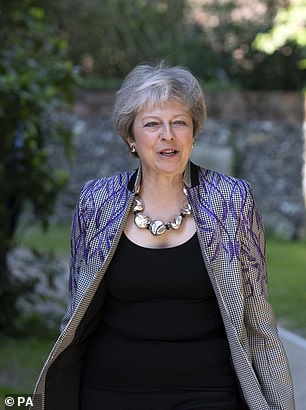 It’s interesting to examine the language used by advocates of a second referendum. The main campaign for this attempt to overturn the result of the first one — which at the time politicians on both sides accepted would be final — calls it a ‘people’s vote’.

The term is itself a pathetic piece of propaganda, which implies that the referendum of 2016 was not a true expression of democracy or of the wishes of the British people.

Tom Watson had originally scorned this movement. Two years ago he vehemently attacked the Liberal Democrats for supporting a second referendum to overturn Brexit: ‘People feel that politicians who campaigned against Brexit are still trying to stop it happening, ignoring the clear decision the British people made.

‘I have to say those fears aren’t completely unfounded. Unlike the Lib-Dem Brexit deniers, we believe in respecting the decision of the British people. To do any less is to fail to respect the British people themselves.’

He might have added that Sir Vince Cable, the Lib-Dem leader calling for a second vote, had declared after the 2016 referendum: ‘The public have voted, and it’s seriously disrespectful and politically utterly counterproductive to say, ‘Sorry guys, you got it wrong, we are going to try again’. I don’t think we can do that.’

So, in order not to seem like the Lib-Dems — or indeed like the People’s Vote campaign which is a little too close to Tony Blair for Watson’s comfort — the Labour deputy leader and his allies insist instead on describing it as a ‘confirmatory referendum’.

The term is designed to persuade people that this would be a vote simply to endorse the deal struck by Mrs May with the EU and subsequently amended to meet Labour’s demands. If that were truly the case, then Remain would not be a choice on the ballot paper. But it will be.

More than that, Watson would clearly back the option to rescind the 2016 referendum result.

The truth is that no one is advocating a second referendum without the express intention of re-running the first one, hoping for a different result.

I do not know of a single MP who backed Leave in the 2016 referendum and who now advocates a second ‘confirmatory’ ballot. One reason for this is that the scare tactics that dominated the Remain campaign of 2016 have been comprehensively refuted. That campaign, which resented being described as Project Fear, asserted, as a fact, that if Britons cast their ballot collectively for Leave, then in the ‘best case’ our economy would shrink by 3.6 per cent and unemployment would soar by over half a million. 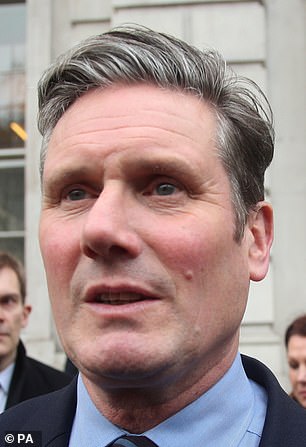 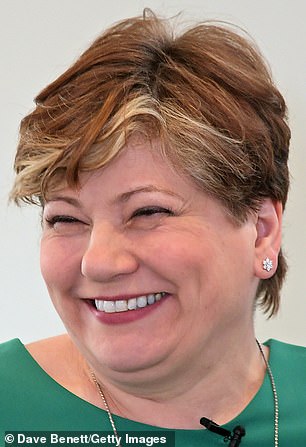 Note that this was their claim of what would happen immediately, just as a result of voting the wrong way, and long before we actually negotiated our departure and left the EU.

Wrong, wrong, wrong. The British economy has continued to grow: and, in the most recent quarter, year on year, at a rate greater than that of all other major EU countries, including Germany.

The employment rate in the UK is now standing at a modern record of 76.1 per cent. The unemployment rate is below 4 per cent, the lowest since 1975. Annual wage growth is running at 3.5 per cent — significantly higher than the current inflation rate of 1.9 per cent.

Bear in mind that all these outcomes are a reflection of the decisions of business and consumers investing in the knowledge that the UK is leaving the EU. Indeed, the most recent figures for foreign direct investment in the UK showed an annual rise of almost £150 billion, to a new record high.

These statistics, dry as they seem, are a monumental reproof to the second referendum campaigners, given that their endlessly repeated message is that those who voted for Brexit had no idea, you ignorant fools, what damage it would do.

None of this means that Watson, and others of the same persuasion in the shadow cabinet, such as Emily Thornberry and Sir Keir Starmer, won’t continue to press for their ‘confirmatory’ referendum designed solely to reject any and all possible means of exit from the EU.

This will be catnip for Nigel Farage and his new Brexit Party, as it seeks to gain representation in Labour’s northern heartlands, which voted overwhelmingly Leave in 2016.

And it explains, in turn, why MPs representing those constituencies, such as the party chairman Ian Lavery (chosen by Corbyn to replace Tom Watson in that role) are vehemently opposed to Labour identifying itself as a Remain party.

It underscores the point that while the Conservatives are taking a beating over the failure to leave the EU by the date that Mrs May had promised (more than 100 times), Labour is more bitterly divided on the fundamental issue.

It is actually sensible of the Labour leader to hope that Brexit happens, so that the issue is resolved and the party can concentrate on matters that unite it.

And, as Watson knows as well as anyone, Jeremy Corbyn is as pro-Brexit as the most convinced Tory Eurosceptic, having voted against every single EU treaty that came before the Commons since he became an MP in 1983.

No wonder he and his deputy hate each other. It doesn’t take a Sherlock Holmes to work that out, either.

Liverpool vs West Ham LIVE plus Southampton vs Burnley rating updates
Malaysian internet cafe accidentally deletes computer game a boy, 12, had spent a year developing
Newborn baby is found dead at house as schoolgirl, 15, is arrested on suspicion of murder
Lambert and Butler tobacco boss says she would not try to stop her two daughters from smoking
Three Britons and a South African die as small plane crashes in Dubai
Colin Farrell was so hungover on set of Minority Report it took him 56 takes to say one line
Tourists take photographs next to Jeffrey Epstein's Upper East Side mansion
Police probe claims Defra board member Ben Goldsmith broke rules over release of deer and wild boar