is streets ahead in the race to replace as Tory leader and has an 18 point lead over his nearest rival Dominic Raab, a poll of party supporters revealed today.

A poll on the influential Conservative Home website shows 33 per cent of people want Mr Johnson to take over as party chief.

He enjoys twice the support of his nearest rival Dominic Raab on 15 per cent, followed by Michael Gove on eight per cent, Jeremy Hunt on six per cent and Sajid Javid on five per cent.

ConHome chief Paul Goodman said: ‘Boris’ resignation catapulted him to the front of the queue as the main Conservative opponent of Theresa May’s EU policy. And the worse she does, the more he thrives.

‘The postponement of Brexit, the talks with Jeremy Corbyn, the return of Nigel Farage, the looming European elections, the sense of drift and paralysis…all these have bumped him up to his highest total since last August’. 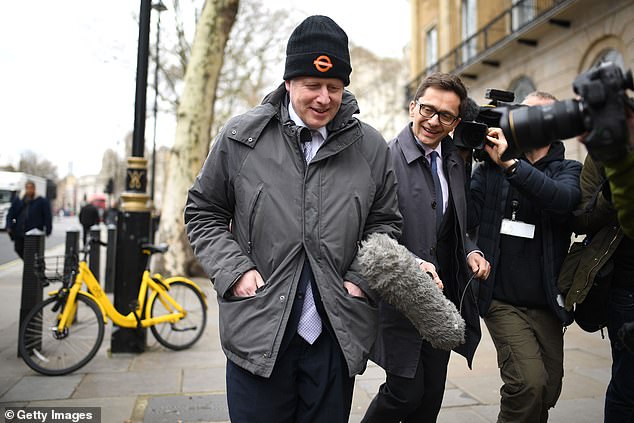 Boris Johnson looks unstoppable in terms of support from grassroots Tories who want him to be the next party leader, a new poll revealed today 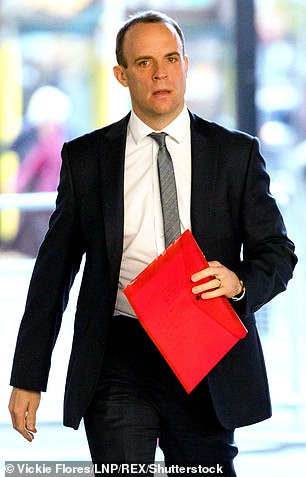 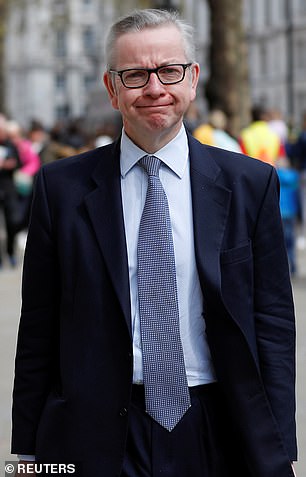 Mr Johnson enjoys twice the support of his nearest rival Dominic Raab on 15 per cent, followed by Michael Gove on eight per cent

Theresa May has promised to quit as leader once Britain leaves the EU, but has so far failed to get a deal through Parliament.

As a result the party is set to be badly beaten in the local elections and European elections.

Last night it emerged that three in five Tory members are set to vote for Nigel Farage’s Brexit Party in next month’s European elections.

In an indication of the size of the grassroots rebellion against Theresa May’s Brexit delay, a poll has found less than a quarter of Tory members are planning on voting Conservative.

The survey on the Conservative Home website found 62 per cent would be casting their vote for Nigel Farage’s new party.

It comes days after it emerged that Tory county councillors in Derbyshire were effectively going on strike by refusing to campaign for the European polls.

They said they would not take part because the elections ‘should not be happening’ – as the UK should have left the EU at the end of March.

The open rebellion comes amid growing anger at Mrs May’s decision to delay Brexit until the end of October, and over her negotiations with Labour’s Jeremy Corbyn.

A poll in yesterday’s Mail on Sunday found that 40 per cent of Tory councillors plan to back Mr Farage’s party on May 23. 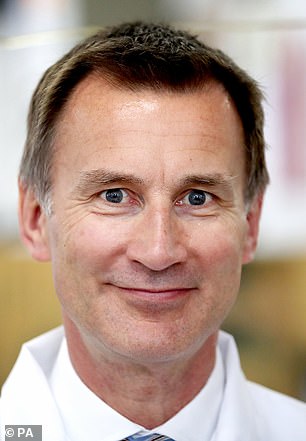 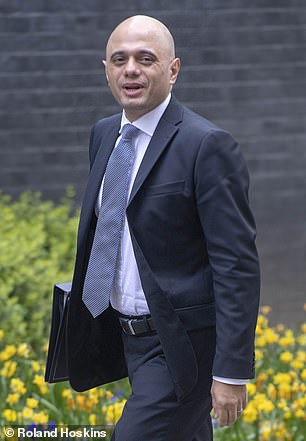 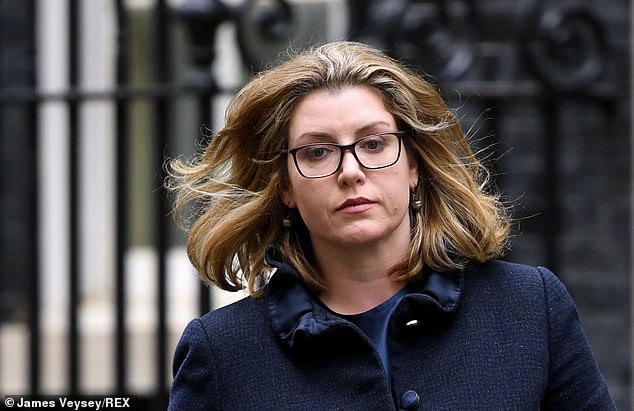 And another survey for Conservative Home suggested party members were even more likely to defect than its activists.

The poll found just 23 per cent of members will vote Conservative next month, compared with 62 per cent who will cast their vote for the Brexit Party.

A Survation survey for the Mail on Sunday found Mrs May’s leadership is a problem for Tory councillors. Only about half said they were planning to vote Conservative at the European elections. That rose to 65 per cent if Boris Johnson were party leader.

Referring to a decision by Derbyshire Conservatives not to campaign in the European elections, Mr Farage said: ‘The faithful servants of one of the oldest political parties in the world are on strike.

‘They refuse to go out and canvass, such is their anger – and, no doubt, sheer embarrassment – at the appalling mess created by our dishonest Prime Minister.’

It emerged last night that 70 local party chairmen have signed a petition calling for Mrs May to ‘consider her position’ as leader.

It means the National Conservative Convention, which represents Tory volunteers, now has a duty under the party’s constitution to call an ‘extraordinary general meeting’, the Daily Telegraph reported.

This would allow a no confidence vote in Mrs May to be held, even though it has been less than 12 months since the last vote, which the Premier survived in December.

Amid all the turmoil, Mrs May found something to laugh about yesterday as she spoke to choristers after the Easter Sunday service at a church in her Maidenhead constituency. Mr Farage enjoyed a cuppa at a tearoom at Shoreham Aircraft Museum in Kent.

Windsor Davies was an icon from when we were allowed to laugh at anything says CHRISTOPHER STEVENS
Teenager, 19, is stabbed to death close to Prince George’s school
Taylor Swift’s stalker says he 'doesn't regret' breaking into her Manhattan apartment
Israel faces an unprecedented THIRD election as Gantz says he should be PM
Unlicensed beautician, 39, gets one year in prison for performing deadly butt injections
The festive high street lunches that contain more calories than a Big Mac
Get fit in 15 minutes: The best exercise and nutrition to blitz back fat
Roald Dahl and Harry Potter provide World Book Day inspiration