She has swapped the runway for a quieter life as a model mum.

But Jodie Kidd, 40, treated the beautiful beaches of Barbados as her catwalk as she enjoyed a blissful day with her boyfriend Joseph Bates on Saturday, during their Easter holiday.

The star looked gorgeous in a skimpy red swimsuit, which gave off Baywatch vibes as she strolled with her handsome beau. 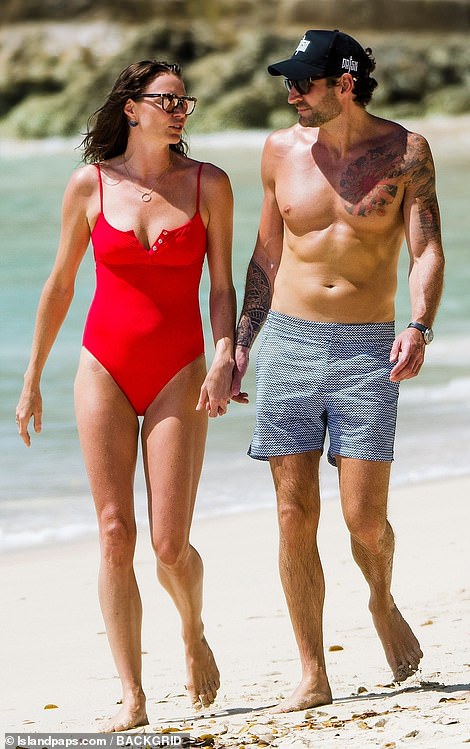 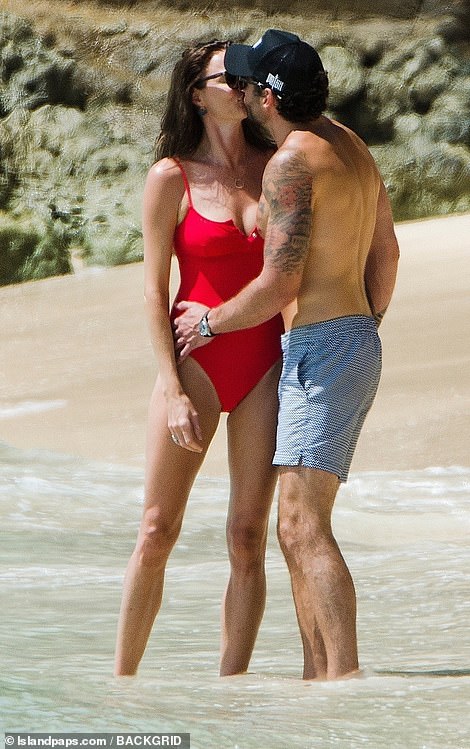 Kiss me quick: Jodie Kidd, 40, treated the beautiful beaches of Barbados as her catwalk as she enjoyed a blissful day with her boyfriend Joseph Bates on Saturday, during their Easter holiday

Jodie flaunted her svelte figure in the racy number, which was unbuttoned to flash a hint of cleavage.

The high-cut style emphasised the 6ft beauty’s tanned and toned legs perfectly as she strode along the white sands.

Jodie was also showing off a dramatic hair makeover, swapping her signature blonde for a glossy brunette hue, leaving her locks flowing around her bronzed shoulders. 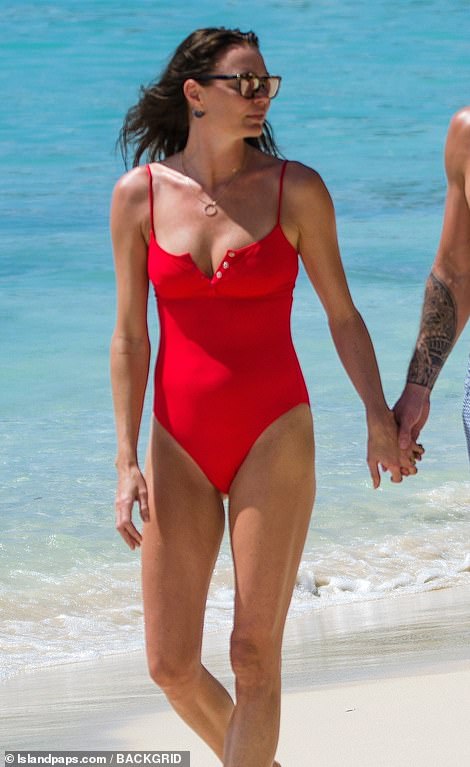 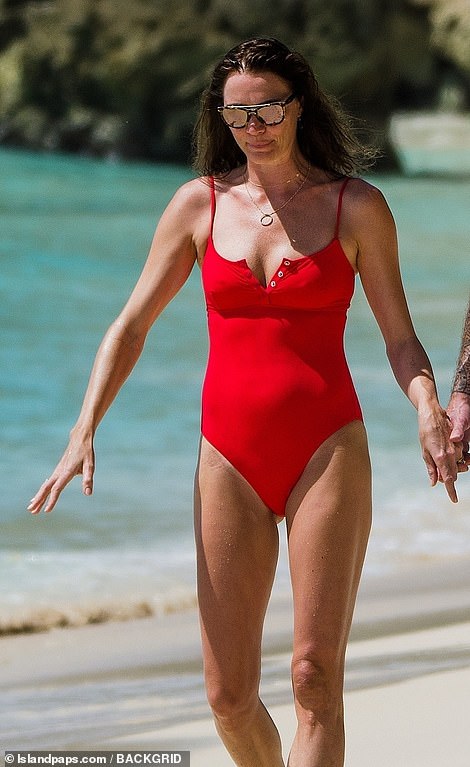 Stunning: The model looked bronzed as she lapped uup the sun in her favourite holiday spot 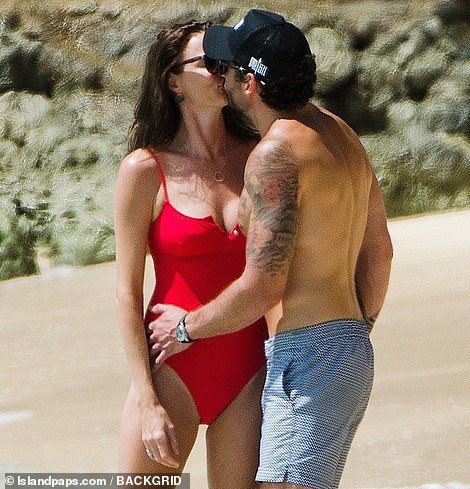 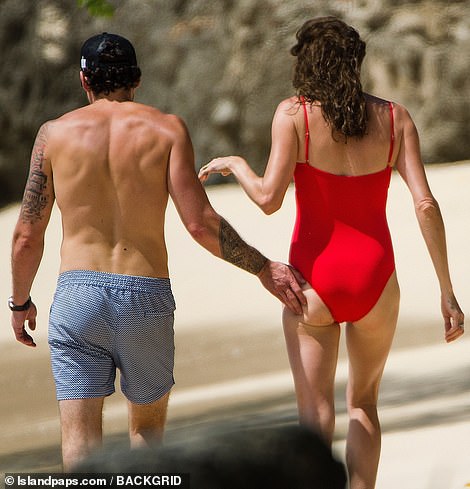 Packing on the PDA: Joseph couldn’t keep his hands off the iconic model as he kissed her before placing his hand on her perky bum

She slipped on shades to keep cool in the blazing heat and accessorised with a chic silver necklace.

Jodie’s boyfriend Joseph approved of her sizzling look, as he leaned in for a series of steamy smooches and held hands with the giggling model as they walked and chatted.

Jodie and Royal Marine turned creative agency exec Joseph made their first public appearance at the 2018 Cheltenham Festival, but the couple have since denied reports they are engaged.

Brunette: The star had swapped her signature blonde locks for a glossy brunette

Barbados is a favourite destination for the lovebirds, who were first seen holidaying there in October 2017, after Jodie accompanied Joseph on a disaster relief mission to Dominica following Hurricane Irma.

According to the Daily Mail’s Sebastian Shakespeare at the time, the duo had previously rowed in kayaks 120 miles down the Gironde, to recreate a World War 2 commando raid.

The model first married internet entrepreneur Aidan Butler in 2005 after a year of romance, but the pair split after 18 months. 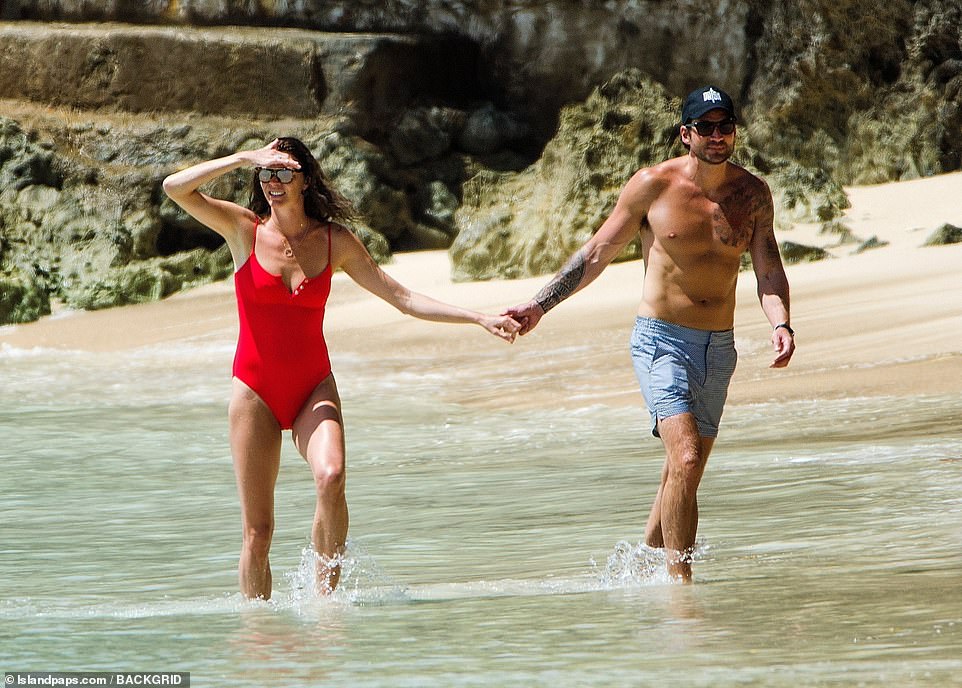 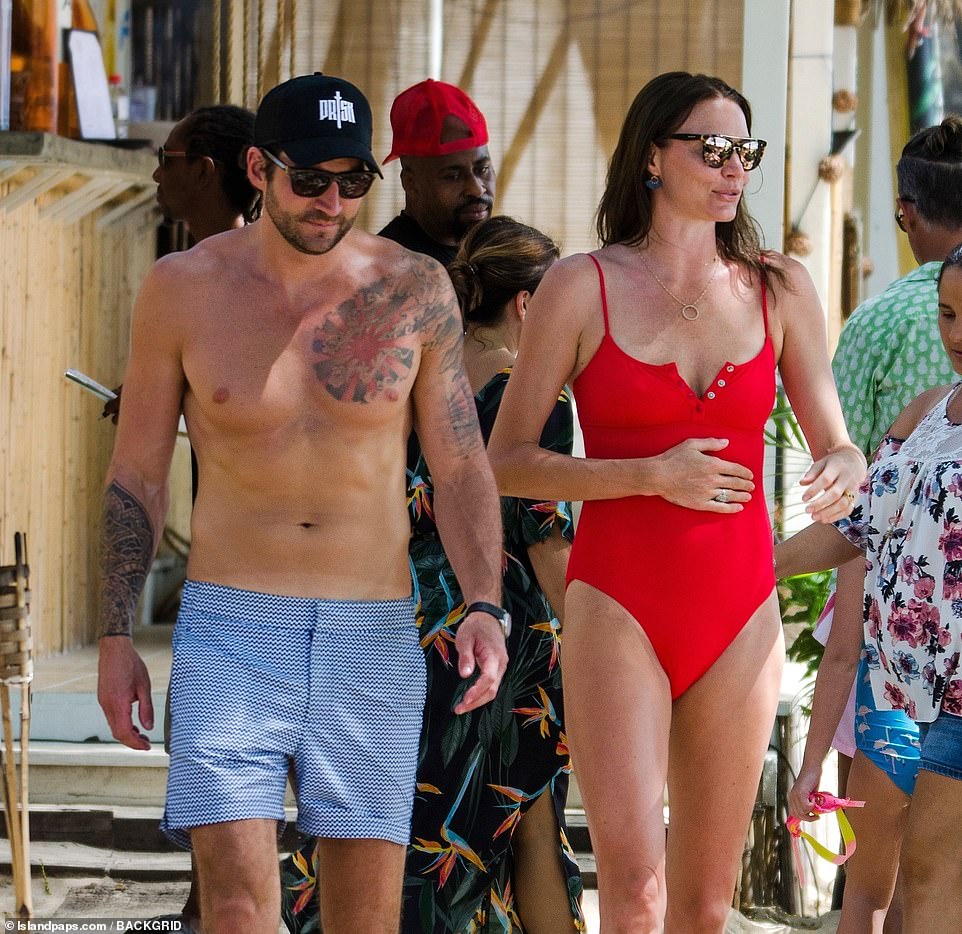 She then embarked on a relationship with Argentinian polo player Andrea Vianini, and the pair welcomed theis on Indio together in 2011, before parting ways two years later.

The blonde went on to tie the knot with author David Blakeley in 2014, but the marriage was collapsed in just four months.

Jodie admitted earlier this week that the pressures placed on mothers to juggle work and family life are unrealistic and ‘absolute rubbish’ as she spoke out on her dramatic change in lifestyle in recent years.

The model who has recently swapped London life to run a Gastropub in West Sussex, spoke out on episode three of the new Refuse to Snooze podcast with Andi Peters.

Jodie spoke about parenting with Andi, and admitted it’s expectations and interference from others, when asked what the worst parts about being a mother are.

‘The expectations of being “a good mum”. It’s a weird expectation of running a business, being a wonderful mother and having the perfect family, which is all absolute rubbish,’ she admitted.

‘You have people looking down going “really, you’re not doing that, you’re not taking him to tennis.” No I don’t have any blinking time!”

Overall though, the star gushed that becoming a mother after years of modelling rebalanced her life.

‘I came from an industry which is quite vain and self-centered and then suddenly you bring this little person into the world and everything shifts and everything makes sense, you go “Ah this is why we’re here.”‘

‘Everything is about that little person and not about you. It was a massive positive in every single aspect of my life,’ she added.

Jodie explained that she’s enjoying a quieter life outside of London and the party scene which she used to frequent. She said, ‘I decided to retreat back to the countryside and stop being in the public eye so much. I just come back in for the things that really mean a lot.’

The star made a sensational return to the runway for London Fashion Week recently, after speaking to the Daily Mail about her struggles with anxiety.

She said: ‘I would like to write about anxiety next, having suffered from it for so many years. I would like to talk about it a bit more, even though I’m not an expert therapist. Through the years of suffering I’ve explored different avenues.’

Jodie, who made one charity catwalk appearance in 2015, has talked of suffering from anxiety her whole life, which compelled her to stop modelling.

‘It’s not performance anxiety — it’s full-on anxiety,’ she said. ‘I had proper wobbles when I was in my late teens and there was a lot of pressure in the fashion industry, which made things worse…

‘I had to stop. I could be backstage about to go on the catwalk, or even doing something as ordinary as the weekly shop, and I’d panic. I knew I couldn’t walk down another catwalk again.’