Facing almost certain impeachment for his role in the Watergate scandal, Richard Nixon resigned as the president of the United States 45 years ago.

As countless students of politics have been taught since, Nixon’s problem was not the crime itself — namely the illegal break-in to the headquarters to spy on and dig up dirt on his rival George McGovern’s campaign.

For Nixon himself was not aware of the secret raid on the Watergate Hotel on June 17, 1972. 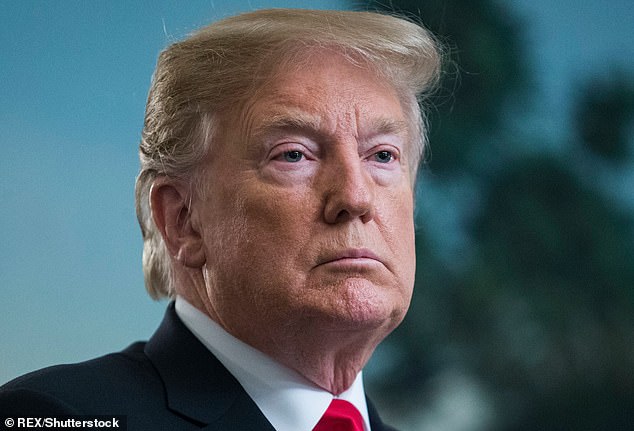 Let’s not mince words about Trump. He is a megalomaniac monster. There is enough material in the Mueller Report for U.S. Congress to move forward and impeach him [File photo]

His downfall was the result of the subsequent cover-up. Nixon had to quit because he lied about White House involvement.

The Republican president’s resignation was an epochal moment in American history. He remains the only U.S. president to have resigned.

I vividly remember, as a teenager, listening to his final broadcast from the White House. It felt as if the world had come to an end.

Nixon told the American people that to leave office before the end of his term was ‘abhorrent to every instinct’ in his body, yet added: ‘But as President, I must put the interests of America first.’

Although he admitted some of his judgments ‘were wrong’, he refused to confess to the ‘high crimes and misdemeanours’ with which he was charged in a bill of impeachment. 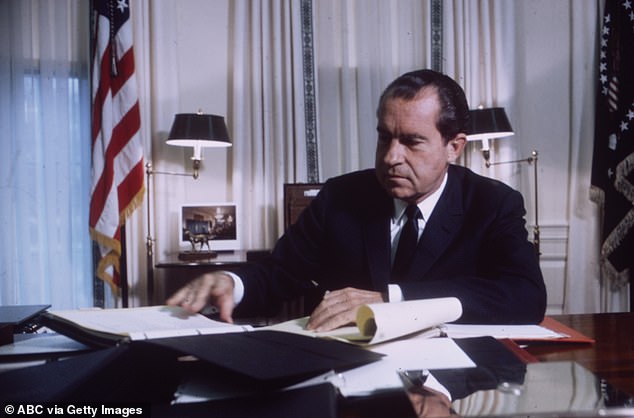 To be generous to Nixon, he was a member of the magnificent generation which grew up between the two world wars and adhered to ideas of right and wrong. Nixon is pictured in 1971 [File photo]

The truth is that Nixon’s resignation was also a glorious moment of renewal for democracy that signalled the triumph of integrity and virtue in politics.

The fact that a crooked president had been forced out of office was seen as a powerful warning to future incumbents of the White House never to do the same again.

Roll forward four decades and many think history is repeating itself in a chilling way.

Two years ago, Robert Mueller was appointed to investigate claims that Russians had meddled in the 2016 presidential election campaign which secured Donald Trump his shock victory over Democrat Hillary Clinton.

On Thursday, his 22-month inquiry ended with a report that concluded the investigation had not established there had been ‘coordination with Russian election interference’.

However, Mueller did come up with a significant number of profoundly disturbing findings, each of which was more heinous than the offences that brought down Nixon. 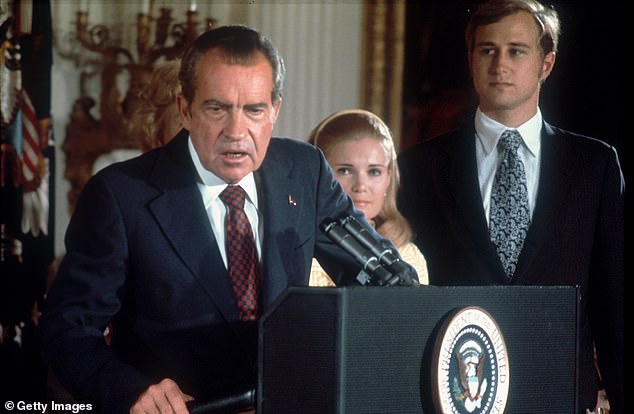 Nixon told the American people that to leave office before the end of his term was ‘abhorrent to every instinct’ in his body, yet added: ‘But as President, I must put the interests of America first’. Nixon is pictured above in 1974 announcing his resignation

Nixon’s presidency unravelled when the existence of hours of tape recordings of his confidants discussing the Watergate break-in were made public, and the president admitted he’d been aware of the cover-up and had tried to halt the FBI’s inquiry.

In an echo of that, the 448-page Mueller report established that Trump ordered his deputies to sack Robert Mueller.

He also made numerous other corrupt attempts to derail the investigation, such as by offering pardons to witnesses.

In total, Mueller investigated 11 potential obstructions of justice made by Trump — for instance, urging the firing of the director of the FBI.

The report concluded that the president’s efforts to influence the investigation were ‘mostly unsuccessful, but that is largely because the persons who surrounded him declined to carry out orders’. Indeed, a White House counsel disobeyed his order to tell the acting attorney-general that Mueller must be ousted.

The lawyer said he would have preferred to resign rather than trigger what he considered would be a ‘Saturday night massacre’ — a reference to the mass firings during the Watergate scandal.

Not only that, the report did confirm that agents of Russian president Vladimir Putin ‘worked to secure’ a Trump victory by hacking and distributing stolen information.

Just imagine if Watergate investigators had discovered the Kremlin had been secretly working for a Nixon victory in the 1972 election, or that Nixon had ordered that his investigators should be sacked. He would have been out of the White House much earlier. 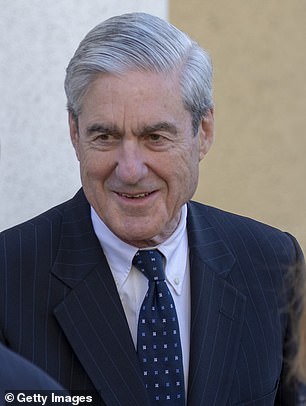 Two years ago, Robert Mueller (above) was appointed to investigate claims that Russians had meddled in the 2016 presidential election campaign which secured Donald Trump his shock victory over Democrat Hillary Clinton

The Mueller findings are so damning that I find it hard to believe Trump’s claims they are a ‘total exoneration’ — adding: ‘No collusion. No obstruction.’

Moreover, experts are predicting that Trump — one of the most repugnant men ever to run the White House — will be elected for a second term in 18 months’ time.

All of which raises the question — how has Trump got away with it? The answer should worry us all.

For Trump is just the most egregious example of a shocking collapse in integrity in public life.

To be generous to Nixon, he was a member of the magnificent generation which grew up between the two world wars and adhered to ideas of right and wrong.

And when he was finally exposed as a liar and a crook, the revelation was greeted by disgust, not just in the United States, but throughout the Western world.

By contrast, Trump occupies the White House at a time when, sadly, criminality, falsehood and amorality have become, too often, the characteristics of many politicians.

British politics is not immune. Just think back to the MPs’ expenses scandal.

Or to Tony Blair telling blatant falsehoods about Saddam Hussein’s non-existent weapons of mass destruction in order to sell the Iraq invasion to the British public.

How typically hypocritical that those on the Left who are so outraged at the lies of Trump went along with Blair’s deceit.

Let’s not mince words about Trump. He is a megalomaniac monster.

There is enough material in the Mueller Report for U.S. Congress to move forward and impeach him.

It is essential that it does so if the United States is to regain its hard-fought reputation as a force for decency in a deeply troubled world.

Nigel Farage has many serious faults. But the British people have reason to be grateful for his comeback with a new Brexit Party.

Above all, it looks likely to bury his former outfit, Ukip, which has become the nastiest political organisation in the country.

Its leader, Gerard Batten, has chosen the odious Tommy Robinson as an adviser, with the result that Ukip has become the gutter of British politics, through which a toxic river of hatred swills down our streets.

The BBC’s shameful disrespect for the Church

The BBC’s failure to treat religion, and in particular Christianity, with due respect was exposed again by its coverage of the Notre Dame inferno in Paris.

As historian Ruth Dudley Edwards has acutely noted: ‘It really was a remarkable feat for BBC1’s News At Ten to get through the entire programme about Notre Dame without a single mention of any of these words: ‘Christian’, ‘Christianity’, ‘Catholic’, ‘worship’, ‘worshippers’, ‘sacred’, ‘Mass’, ‘Holy Week’.’ 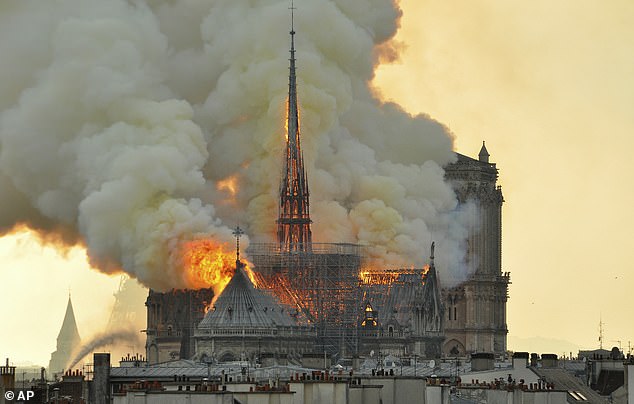 The Cathedral of Note Dame in Paris is pictured alight during a devastating fire this week. No fire, however terrible, can ever destroy the power of people’s faith

This Easter weekend, when we Christians remember unimaginable sacrifice and redemption, is an ideal moment to reflect that for 850 years, countless Christians have worshipped at the Paris cathedral and at other churches to bear their souls before God.

No fire, however terrible, can ever destroy the power of people’s faith.

The Crown Prince of Saudi Arabia, we learnt this week, will host the G20 economic summit of the world’s biggest economies next year.

This is despite global outrage over the brutal murder of respected journalist Jamal Khashoggi in the Saudi consulate in Istanbul.

It’s utterly immoral that Saudi Arabia has been welcomed back into the comity of nations.

Dwelling And Away's Sam Frost walks her canines for a photoshoot
Movie star Large Brother: Dan Osborne gives Gabby Allen a therapeutic massage
Selena Gomez meets a mystery man for breakfast as she keeps it casual in '90s inspired outfit
Transgender prisoner sexually assaulted inmates at all-female prison
Uber driver guilty of death of a British man, 30, who died after opening cab door into oncoming bus
British tourist claims he was given the worst cheese board ever after paying $28 for THIS
Plastic debris is now a bigger risk to filter feeding whales than OIL
Jeremy Hunt calls for tests and tracking to 'break the chain' of coronavirus transmission