has kept viewers glued to their seats since it first launched in 2011, with plenty of sex scenes, epic battles and dragons.

As one of the most popular shows in recent years, talk of who should, or will, win the Iron Throne in Westeros has been almost impossible to avoid.

Breakout stars including and Kit Harington have become familiar faces across the silver screen, and for most of us it would be impossible to picture anyone else playing the Mother of Dragons or Jon Snow.

But how do the HBO characters compare to their descriptions in the wildly popular George R. R. Martin series A Song of Ice and Fire?

According to , most of the characters are spot on, but there are some very big differences – from Tyrion’s injuries at the Battle of the Blackwater to Daario Naharis’s lack of a blue beard.

Some of the characters, such as Daenerys Targaryen and Sansa Stark are made older, with Daenerys aged 16 instead of 13, and Sansa 13 instead of 11 at the start of the show – presumably because of some of the sexual and violent content.

Here, Looper has photoshopped the cast to show how they would really look if the producers stayed closer to the books . . . 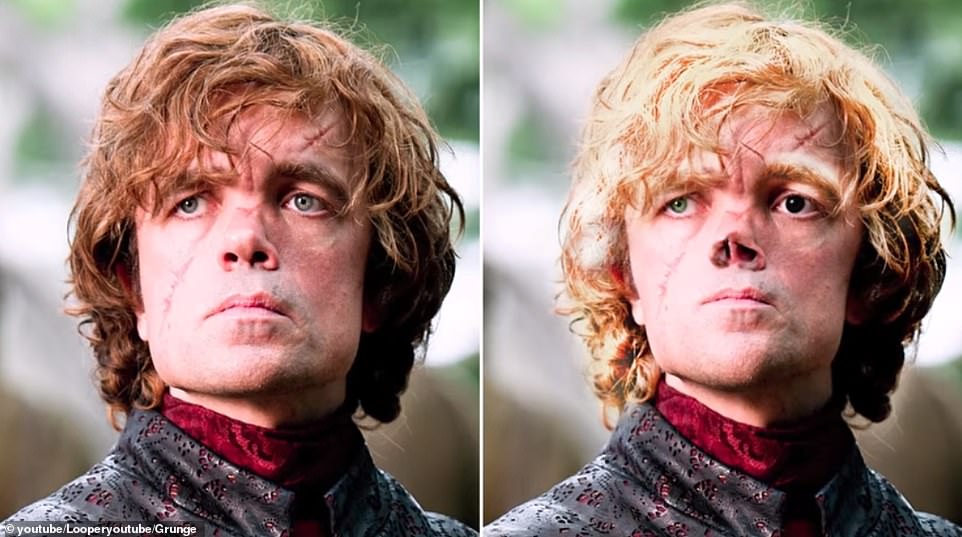 Tyrion Lannister, as portrayed by Peter Dinklage, is one of Game of Thrones fans’ favourite characters without a doubt. But in the show, the producers have been far kinder to him than author George R. R. Martin – he doesn’t have different coloured eyes, or his ‘lank fall of hair so blond it seemed white’. He also manages to keep his nose during the Battle of the Blackwater – instead gaining a large scar across his face 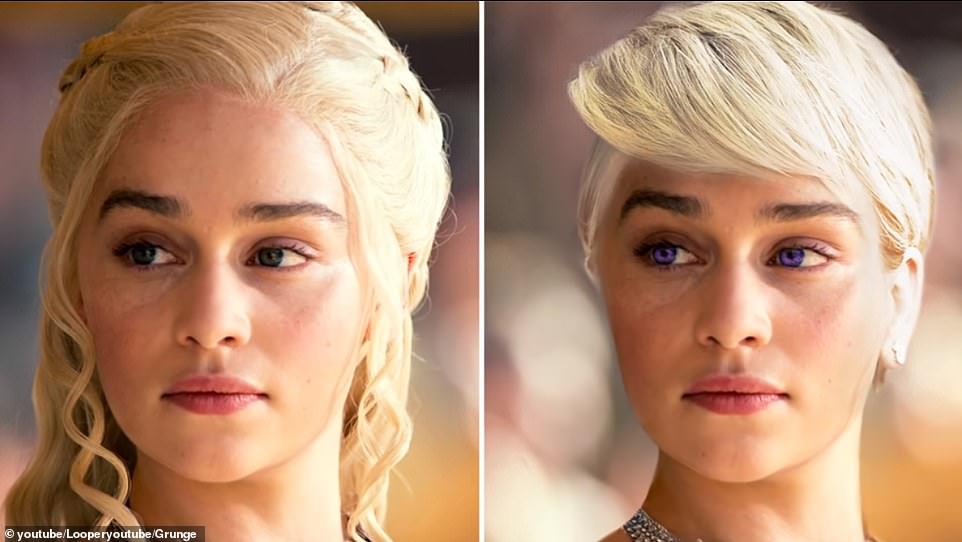 In the books, violet eyes are meant to be incredibly common in the Targaryen family – but Emilia Clarke’s Daenerys doesn’t have them. And while the producers were happy enough to lop off Cersei’s locks, Daenerys doesn’t lose her instantly recognisable silver hair when she climbs on to Khal Drogo’s funeral pyre with her eggs and becomes the mother of dragons in season one as she does in the first book. If she had, by the time she arrived in Westeros she might have a chic pixie cut (right) 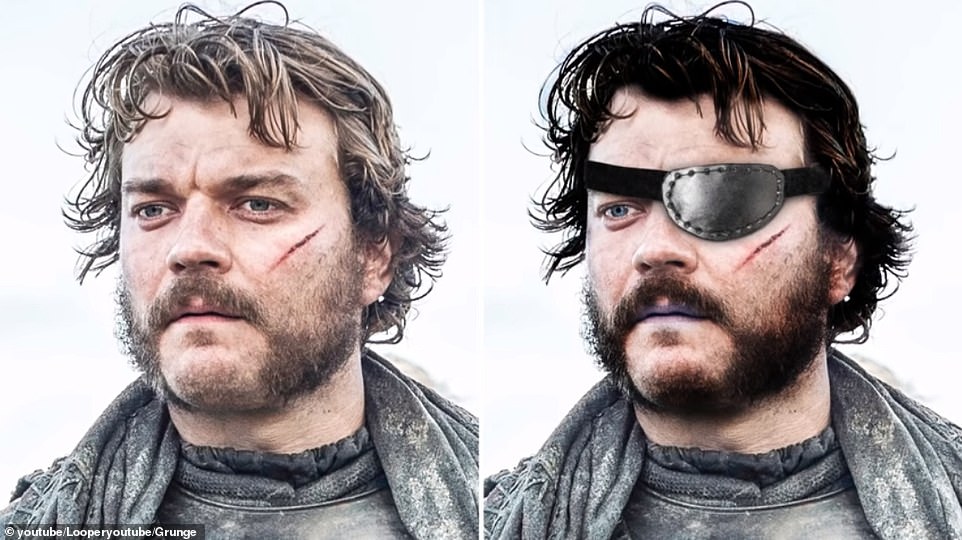 Pilou Asbæk’s portrayal of Euron Greyjoy is certainly entertaining, but GRRM’s character should have hair as ‘black as a midnight sea’ – and a missing left eye 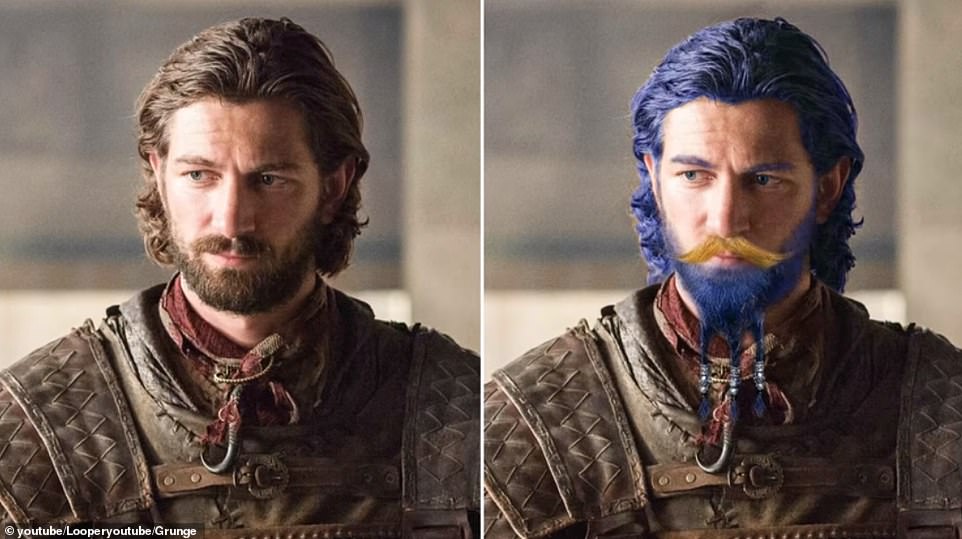 Daario Naharis, Dany’s lover and the leader of the Stormcrows who are hired to defend the slavers city Yunkai in the books, is a very eccentric looking man. He is meant to have blue eyes, matching long blue hair and a blue beard, but a gold moustache. In the show, both versions of the character, played by Ed Skrein in season 3 and Michiel Huisman in seasons 4 to 6, look far more normal 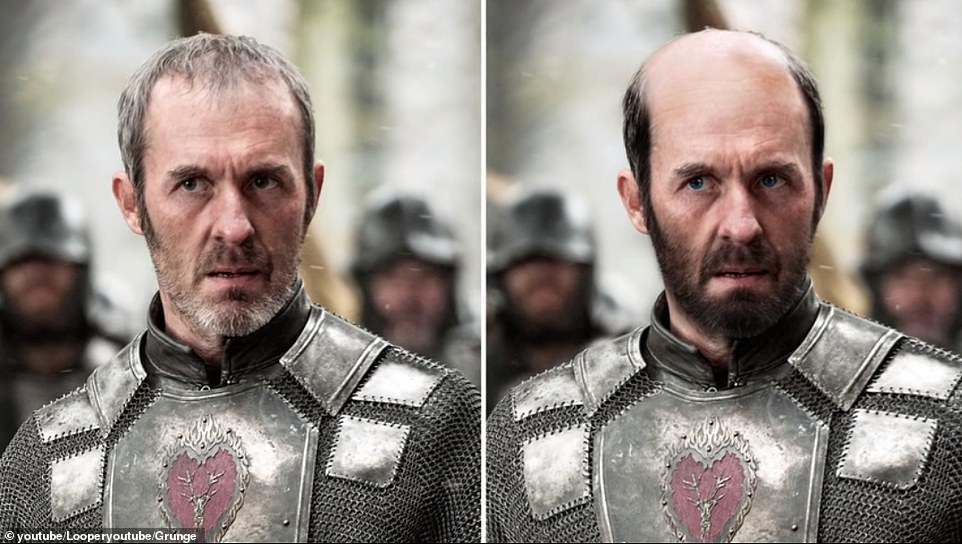 Stannis Baratheon, the younger brother of King Robert, is described in the books as nearly bald at the age of 34, and with ‘a mouth that had forgotten how to smile and had never known how to laugh’. While Stannis’ character is just as miserable in the show, the producers have given him slightly more hair and a silvery beard that isn’t quite in keeping with a man in his 30s 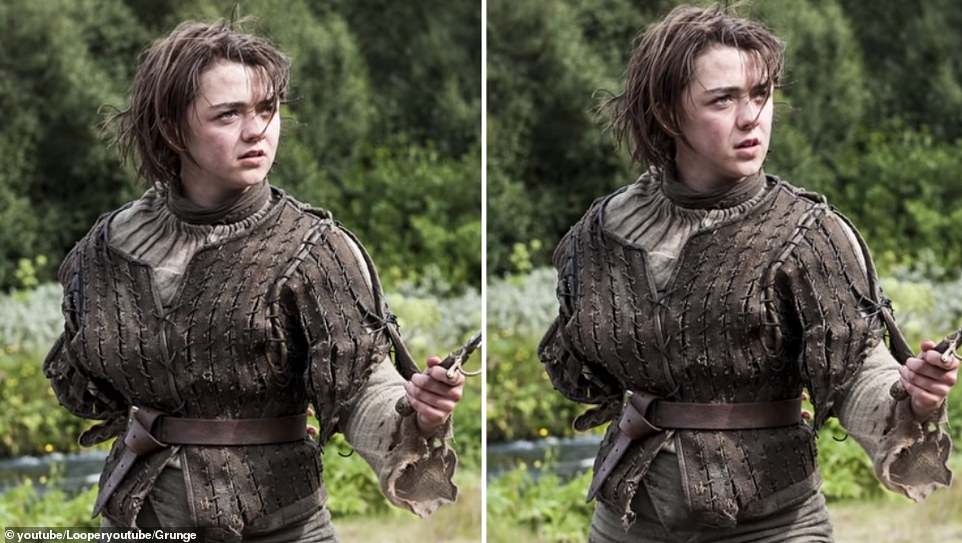 Looper has declared Maisie Williams ‘as close to perfect for the part of Arya as you can get’. The only major difference is that in the show Arya has been aged up to 12 in season one, instead of 9 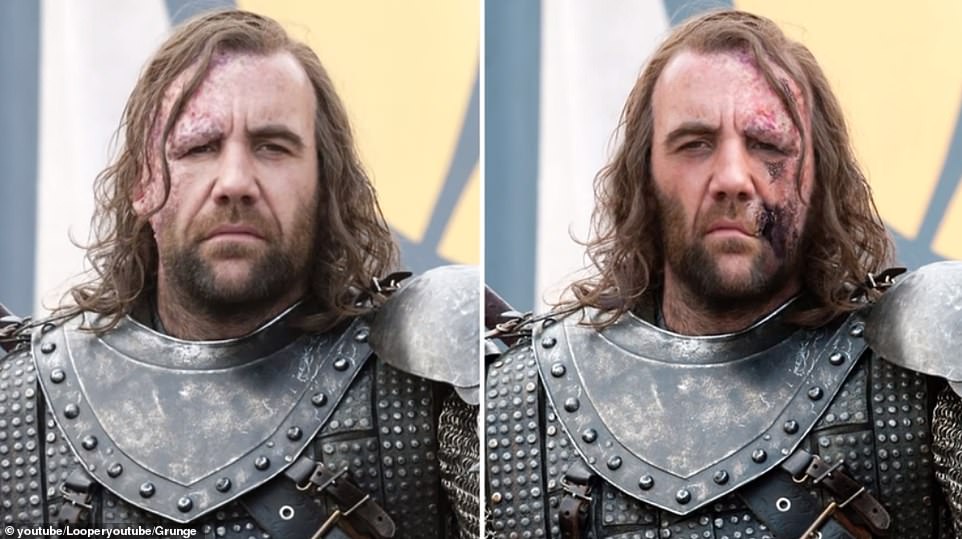 The Hound had half his face burnt off when his brother The Mountain pushed him into hot coals as a child in both the books and the TV series – but HBO producers decided to move the damage from the left to the right side. The scarring is also less severe – GRRM described his face as a ‘ruin’, adding that ‘down by his jaw, you could see a hint of bone where the flesh had been seared away’ 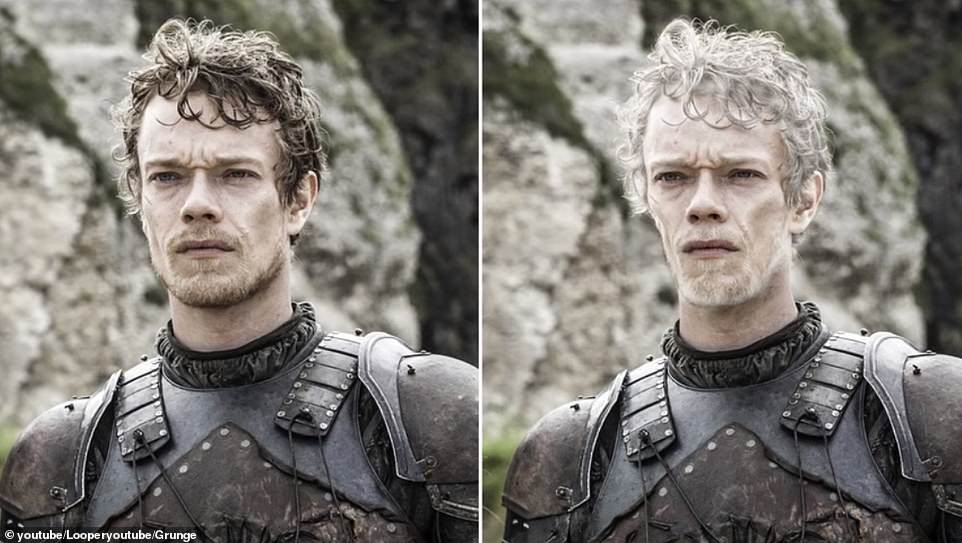 While HBO’s Theon Greyjoy undoubtedly suffered a great deal at the hands of Ramsay Bolton, there are some major differences. In the books, it’s only hinted at that he has been castrated, while in the show it is basically confirmed. After his time in Bolton’s dungeon, Reek’s hair turns white, he loses three stone, and is missing three fingers and four toes 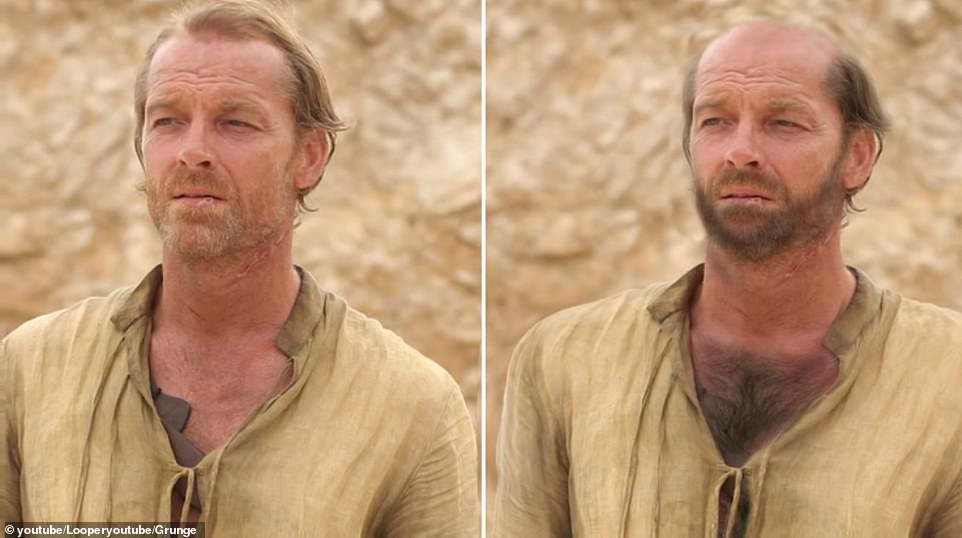 In the books, Jorah Mormont is described as ‘not a handsome man’. He’s also covered in ‘coarse black hair’ – something actor Iain Glen certainly isn’t 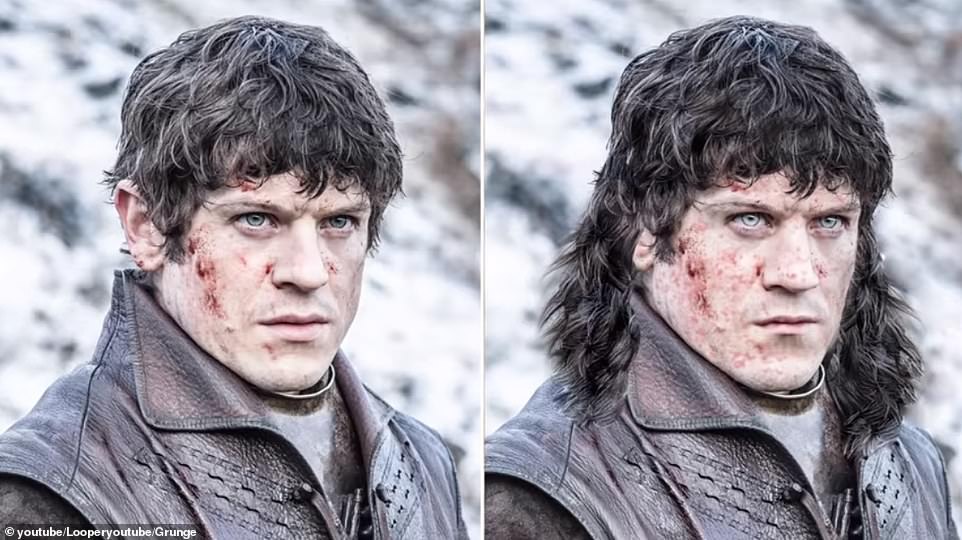 Iwan Rheon does a great job playing the sadistic Ramsay Bolton on Game of Thrones – but the Misfits actor is far too good looking in comparison to his book description. In it, he is called an ‘ugly man’ – despite ‘all the splendor of his garb’, and has a ‘blotchy’ pink face 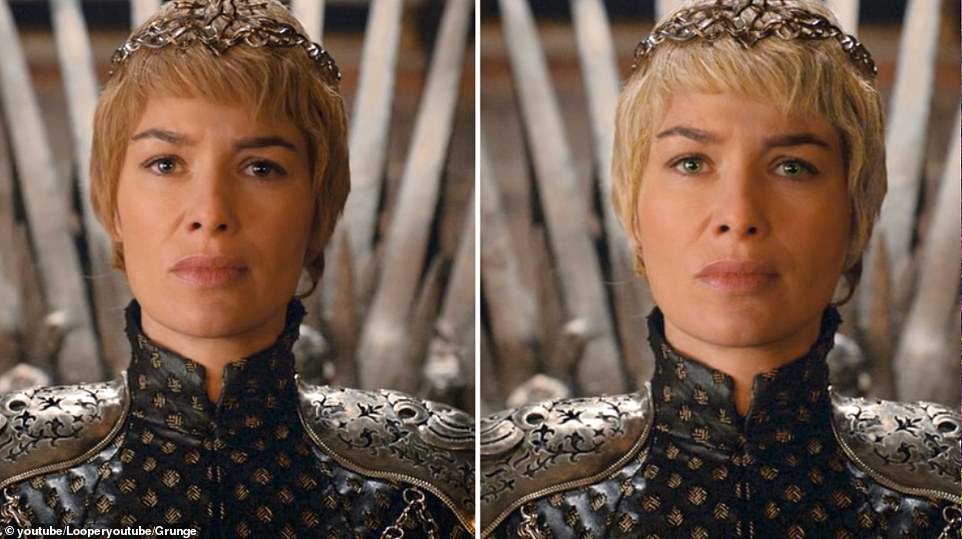 Cersei and Jaime Lannister are meant to be nearly identical in the A Song of Ice and Fire books – something the producers understandable failed to replicate. Cersei’s hair should also be far lighter, and her character is meant to gain weight as she begins to drink heavily to cope with the loss of her children

Foragers say Fox Meets Bear blogger has harmful recipes in cookbook together with poisonous uncooked...
Vermont will get first transgender major-party gubernatorial candidate
Tragic texts husband despatched pregnant spouse simply months earlier than he killed her and their t...
‘We’ve never had signals’: Serena Williams maintains she did not receive coaching during the US Open
Joe Biden makes pitch to working-class Trump voters to back him in 2020
Attorney for the man accused of killing Nipsey Hussle withdraws after threats to his children
Two men walked a 500 feet high rope over the border to show solidarity
Entrepreneur on lockdown in abandoned California mining town he was trapped by snowstorm