Police were filmed clashing with pro- protesters outside Parliament today – after being spotted raving and skateboarding with environmentalists during the week.

In the footage, taken outside the Palace of Westminster, appears to show officers grappling with one demonstrator, who wore a high-visibility yellow vest similar to the ones worn by French protesters, before the struggling parties fall to the ground.

A voice from the crowd can be heard saying ‘that was out of order!’ as officers seem to restrain the protester as he lies on the road. 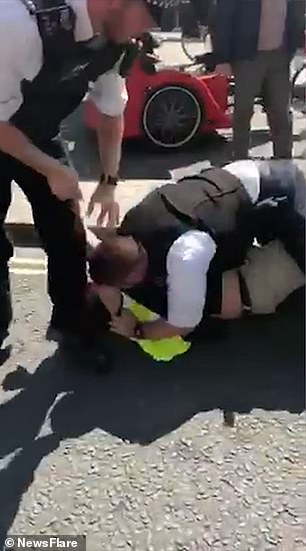 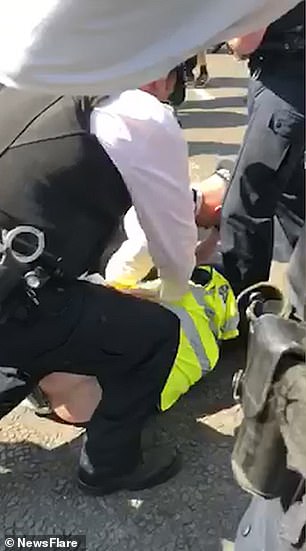 Two officers are seen grappling with one demonstrator, who wore a high-visibility yellow vest similar to the ones worn by French protesters, before the struggling parties fall to the ground

Additional footage appears to reveal an officer pushing back a protester – who had pointed at the policeman and said ‘you will not tell me what to do’ and called the officer a ‘paid thug’.

Other footage shows vest-wearing protesters being pushed away by officers as one onlooker declares the act ‘police f***ing brutality’.

One voice from the crowd brands the officers ‘scum’, while another says ‘I hope you’re f***ing proud of yourselves’.

Earlier this week Home Secretary Sajid Javid urged police to use ‘the full force of the law’ against Extinction Rebellion climate change protesters as they entered their fifth day.

After a briefing from Met Commissioner Cressida Dick, Mr Javid said: ‘I totally condemn any protesters who are stepping outside the boundaries of the law. 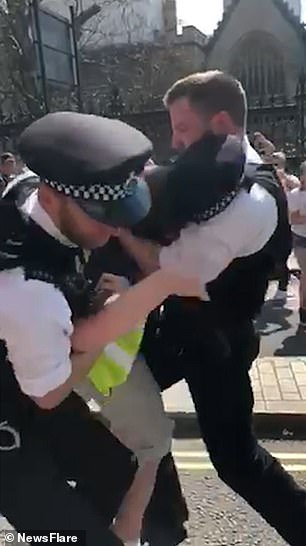 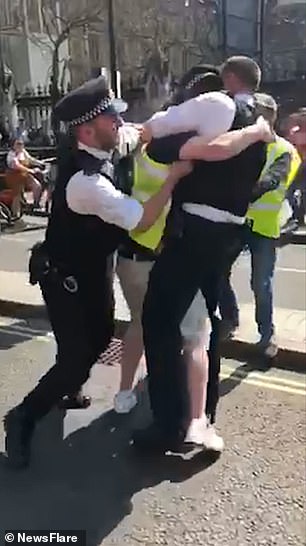 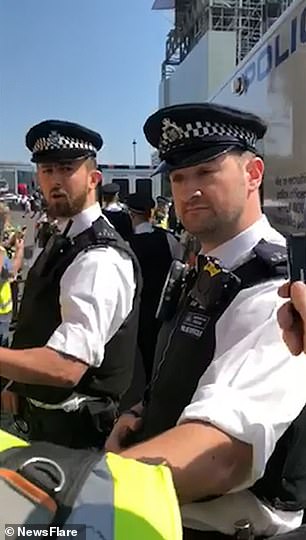 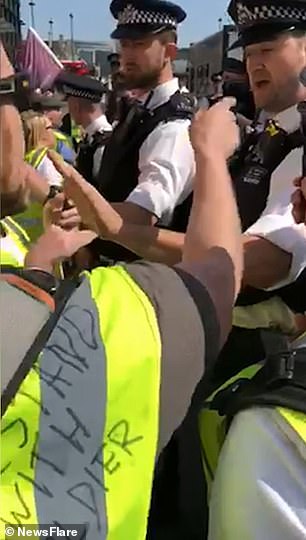 ‘They have no right to cause misery for the millions of people who are trying to lead their daily lives. Unlawful behaviour will not be tolerated.

‘I expect the police to take a firm stance and use the full force of the law. They have my full backing in doing so.’ 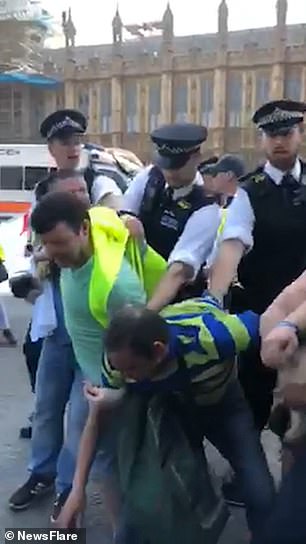 Earlier in the week officers were pictured strolling by drum-playing eco protesters blocking Waterloo Bridge, with the Met saying it had to respect the campaigners’ right to protests.

Police were also slammed by their own commander after officers were filmed raving with protesters, while another was spotted skateboarding on Waterloo Bridge.

Conservative MP Andrew Rosindell had previously said: ‘[Police] should be clearing the streets so Londoners can get to work. Instead they have surrendered the streets to these people.’

Tory MP Nicholas Soames, the grandson of Sir Winston Churchill, had said: ‘Not absolutely convinced that our excellent Metropolitan Police are at present maintaining The Queen’s Peace on the streets of London.

‘Absolutely unacceptable that our great city is being held to ransom.’

Mayor of London Sadiq Khan was criticised after praising the eco-warriors for their ‘co-operation’.

Today the majority of climate change protesters at Oxford Circus were finally moved on by police – only to go to Hyde Park instead, where thousands are celebrating an international cannabis day.

Officers had said they would arrest any activists found camped out after 10.30am on a busy junction of Oxford Circus – but they withdrew from the scene just an hour later. 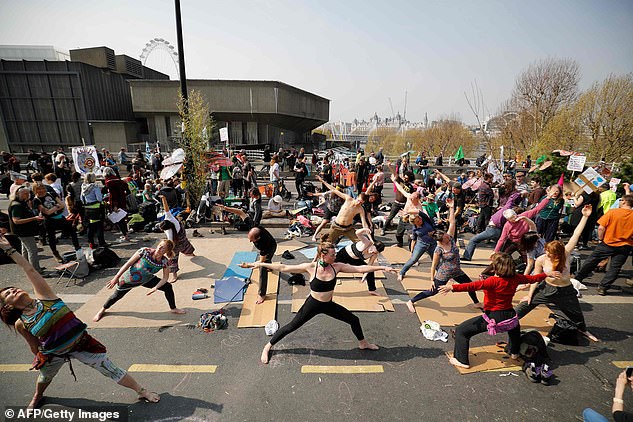 Waterloo Bridge had previously become the scene for yoga parties and a skateboard ramp despite police ordering crowds to disperse on Monday night (pictured: April 17)

This allowed the small group of protesters, which numbered just 30 at the start of the day and was outnumbered by around 50 officers, to swell as it approached midday.

As of 10am, more than 715 people had been arrested, with 28 protesters charged following the six days of demonstrations.

Police tried to force protesters away from Oxford Circus and other locations in London, filtering them to Marble Arch.

A statement from the force said: ‘We are trying our best to give the businesses a chance to return to ”business as usual”.’