A Massachusetts couple was shocked to receive a nearly $4,000 medical bill after their son was born.

They had carefully chosen a hospital and obstetrician that were covered by their insurance ahead of Laura’s due date.

So they were confused when the eye-watering bill arrived in the mail, CBS reported.

Like many patients across the US, Laura had unwittingly been treated by an anesthesiologist who was out of her and Adam’s insurance network – and were expected to pay a high price for the short time they spent with the doctor. 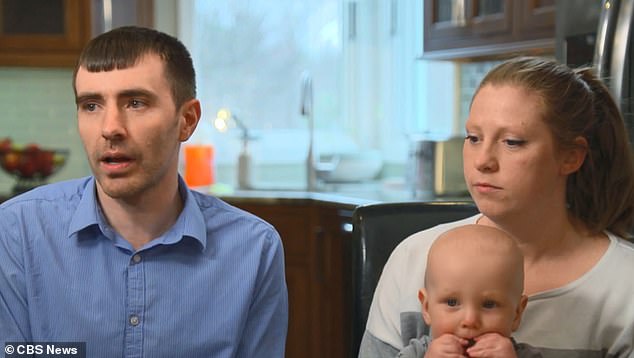 Adam (left) and Laura (right) Parkinson got a $3,700 bill after the birth of their son, Nathan (bottom right) because the anesthesiologist who gave Laura an epidural was out-of-network

The average American spends almost $5,000 a year on health care, and emergency procedures cost an average of $12,000 before insurance.

One Kaiser Family Foundation survey found that about 70 percent of Americans that get a surprise bill had no idea they were attended to by a doctor outside of their network.

And the most common provider that ends up being out of network is the anesthesiologist.

It’s an all-too-common phenomenon, and it costs countless people their savings and forces some into second (or third) jobs or mortgages.

Even the most informed families, like the Parkinsons, can fall into the trap.

‘You go to a hospital, expecting it to be in-network. You don’t have to ask a question of every single person who walks in the door, “hold on, are you in network?,”‘ Adam said to CBS News.

When Laura gave birth to Nathan, she received an epidural injection to ease some of the pain of delivery. 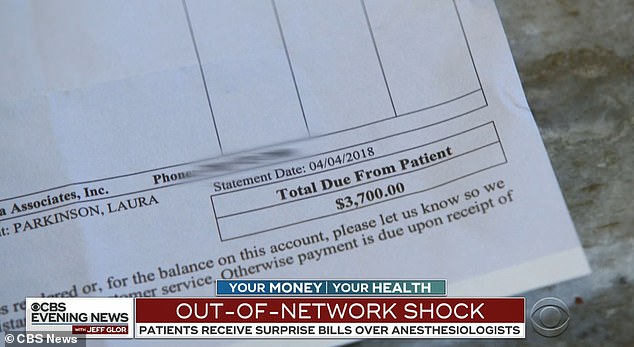 The Parkinsons were shocked when they owed $3,700 because the anesthesiologist that administered Laura’s epidural was out of their insurance network

It’s a simple procedure that takes little time. The spot on Laura’s back where the needle would go in was numbed, the needle inserted, then a catheter tube was slid into place.

But it does require an obstetrician, nurse anesthetist or anesthesiologist to administer.

And yet that one person’s time was so precious, it was purportedly worth $3,700.

‘For a doctor that we’ve seen for five minutes to give us a bill like this. It was crazy,’ Adam said. 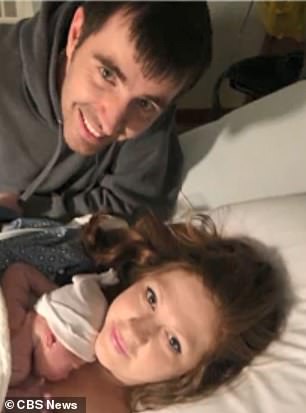 Baffled and frustrated, the Parkinsons called their insurance company, which agreed to cover half of the $3,700 bill they’d received.

That still left the family with $1,500 in medical debt, on top of the many costs of having a new baby.

So Laura and Adam went to their local government. Particularly,they called the office of Massachusetts Attorney General Maura Healey.

From her office they learned that Massachusetts is one of 21 states that has at least some protections to keep patients from having to pay alarming, surprise bills.

According to the Commonwealth Fund, only six of them have laws that meet its standards for being ‘comprehensive.’ Massachusetts is not among those.

‘You need to be transparent, you need to make disclosures.’

After an eight month battle, the hospital agreed to waive the bill.

But Laura told CBS she’s learned an important lesson: ‘It’s okay to question the bills that come in,’ she said.