A desperate bid is underway to save a forlorn polar bear at least 450 miles off course after being carried away on an ice floe off ‘s Pacific coast.

The beast headed towards the police station in Tilichiki village once the floe touched land, evidently pleading for human help.

The predator is ‘lame, exhausted and confused’ but has climbed on its hind legs to peer into windows in a search for food or assistance, leaving some locals scared, according to reports in Kamchatka, a peninsular in the extreme east of Siberia.

Residents have left fish for the bear and police officers in the remote settlement – population 1,750 – are watching over the animal as Russian officials seek to organise an airlift for the bear back above the Arctic Circle. 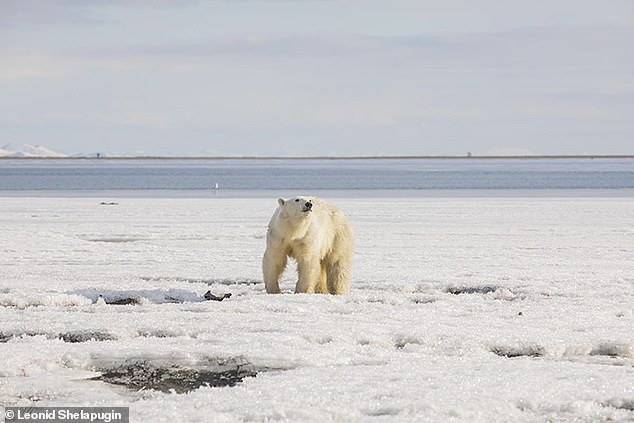 The polar bear, named Umka, stands on the ice near the village of Tilichiki on Russia’s Pacific coastline after drifting 450 miles on an ice floe from the north 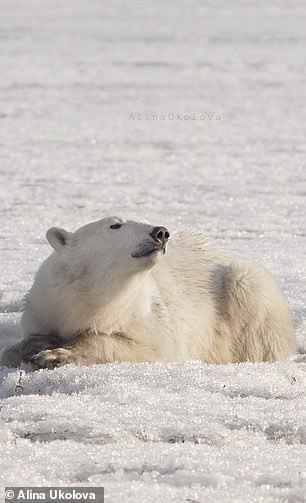 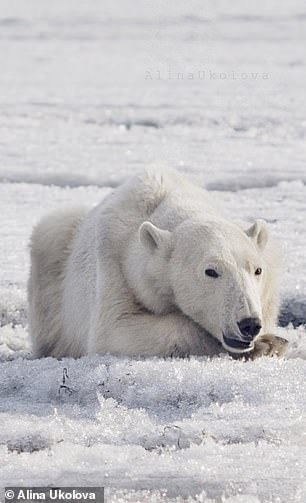 The polar bear is described as ‘lame, exhausted and confused’ but has clambered up to windows in the village in his search for food 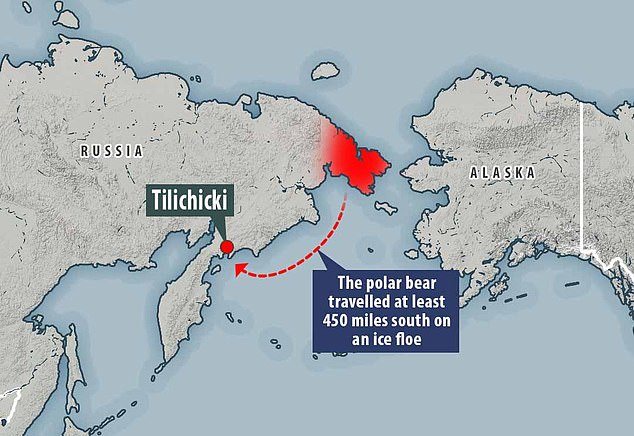 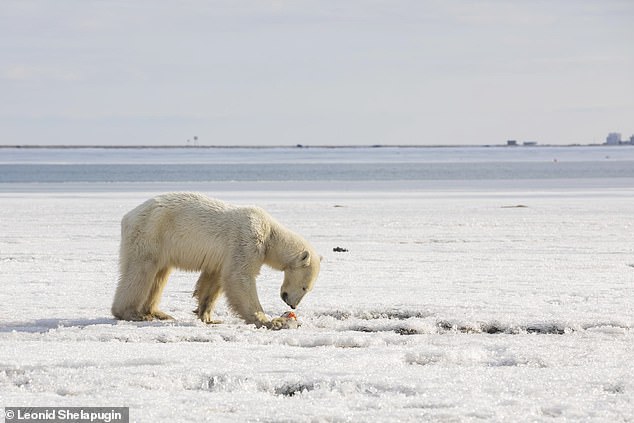 The young male polar bear, now named Umka, got stuck on the floe off the coast of Chukotka, Russia’s most easterly region, and floated far to the south away from its natural habitat, travelling a distance at least as great as London to Edinburgh.

The wild animal seems to have a wounded front paw and is ‘disorientated’ and weak after its odyssey.

The ‘forlorn’ beast is scavenging for food in the bleak village.

Svetlana Gubareva, deputy head of the district, said: ‘At first, the animal behaved quite actively.

‘Locals filmed it on video, photographed it, and yesterday – fed it with fish, though he did not eat much. 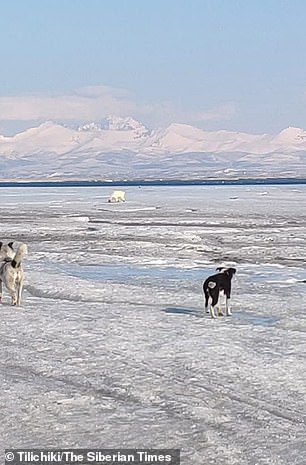 A pair of dogs from the village assess their new neighbour

‘The bear looks drained and weak.

‘For some reason he does not catch fish and seals, which we have in good supply.’

Locals came out to gawp but also want to help.

Yet they are rightly frightened to approach too close, reported , a resident on one video says: ‘He is starving….. Poor poor bear, so hungry….

‘If this wasn’t Russia but America, they would have found a way to send him to sleep and move him to an animal enclosure.’

But then a voice is heard getting frightened as the bear approaches.

‘We’ve got to go, we are leaving,’ says the woman. ‘Please can we go now, we won’t have enough time to escape, please, please can we go!’ 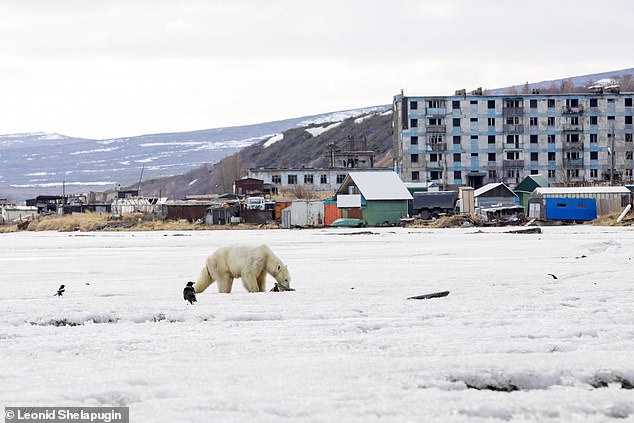 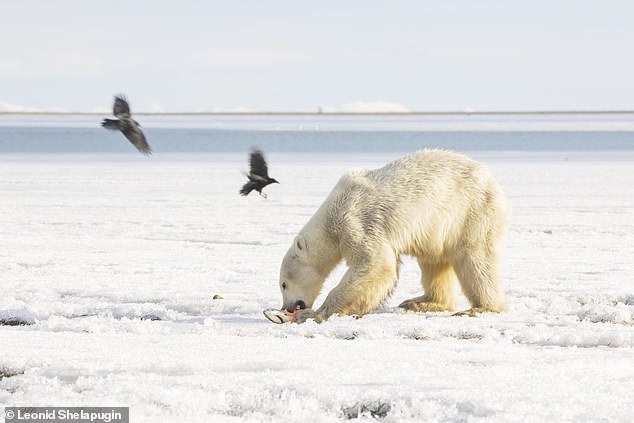 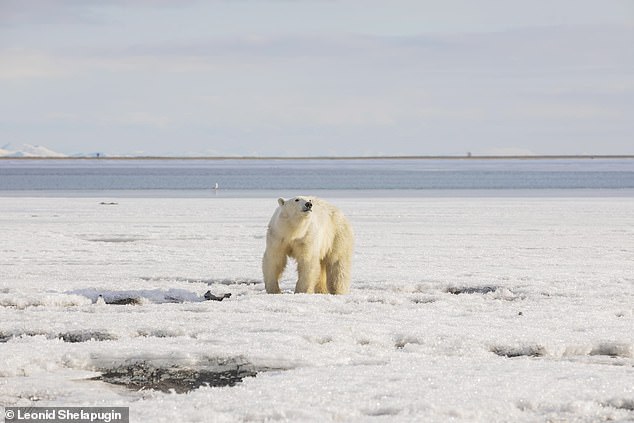 In fact officials in Kamchatka have called in the Russian Emergencies Ministry in a bid to rescue Umka.

‘He lies near the bay on the ice – close to our police station,’ said Gubareva.

‘The police are watching him so that no one will approach him.’

Regional wildlife head Vladimir Gordienko said that bears getting carried away by floes is a rare event.

‘Bears get here on the ice floes washed this way,’ he said.

‘As a rule, they cannot go back to Chukotka. In Kamchatka, the feed base does not suit them.

‘So, most likely, such guests will die.’ 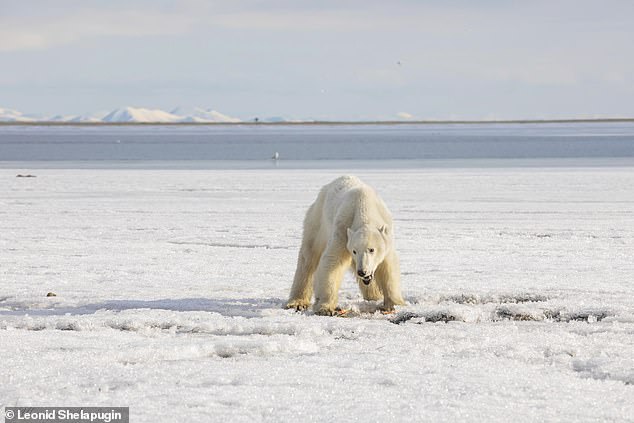 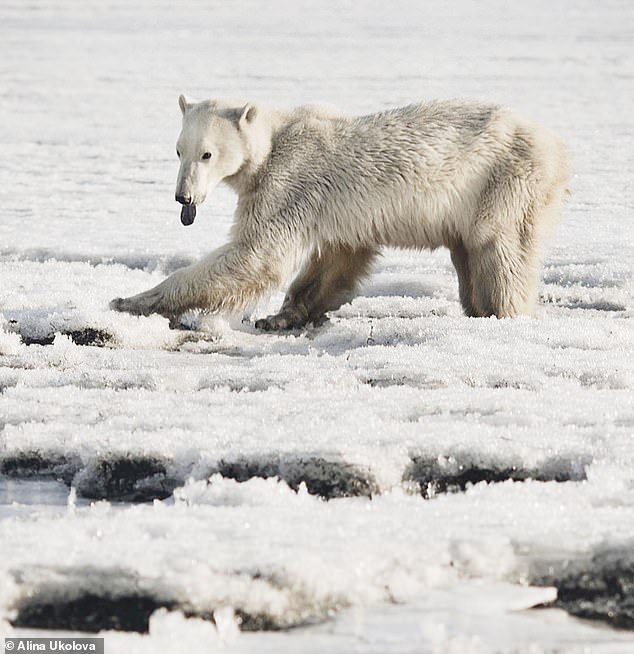 However, regional governor Vladimir Ilyukhin is seeking to organise a rescue for Umka.

‘A special cage is already being manufactured in (regional capital) Petropavlovsk-Kamchatsky for transporting the animal,’ said Kamchatka official Sergey Khabarov.

‘On arrival in Tilichiki, specialists will temporarily put the bear to sleep so he can cope with the flight.’

An assessment will also be made if the bear needs medical attention for its paw.