A furious mother has hit out at Waitrose for selling ‘sexist’ children’s birthday cakes.

The upmarket store has come under fire for advertising pink cupcakes for girls, and football-shaped treats for boys.

The apparently outdated products were pointed out by eagle-eyed mother Louise Dillon , from Warwickshire, who implored Waitrose to ‘do better.’

‘I get that many of the cakes appear on both lists. But, in addition, girls get pink castles, cupcakes and handbags, boys get fire engines, pirates and all the sports.

Mother-of-two Louise Dillon, from Warwickshire, called out Waitrose for its ‘sexist’ children birthday cakes, after she spotted pink treats for girls, while boys’ cakes included a football shape 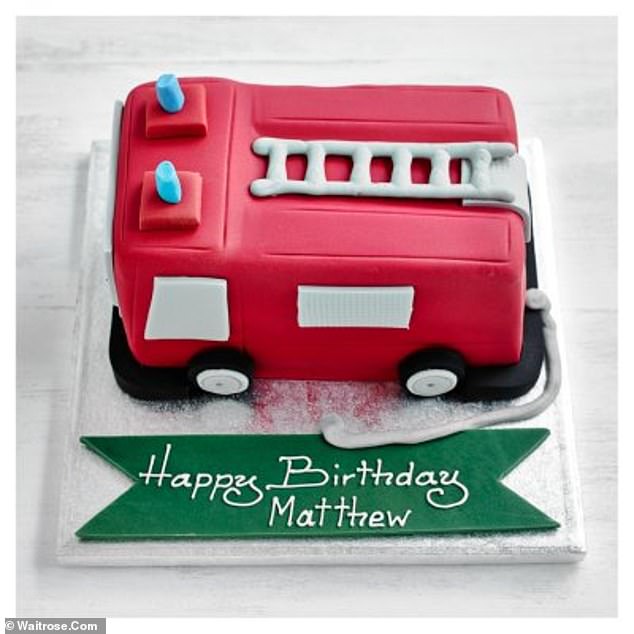 A boy’s birthday cake shaped like a fire truck, sold by Waitrose. Parents are calling out the brand for selling gendered cakes 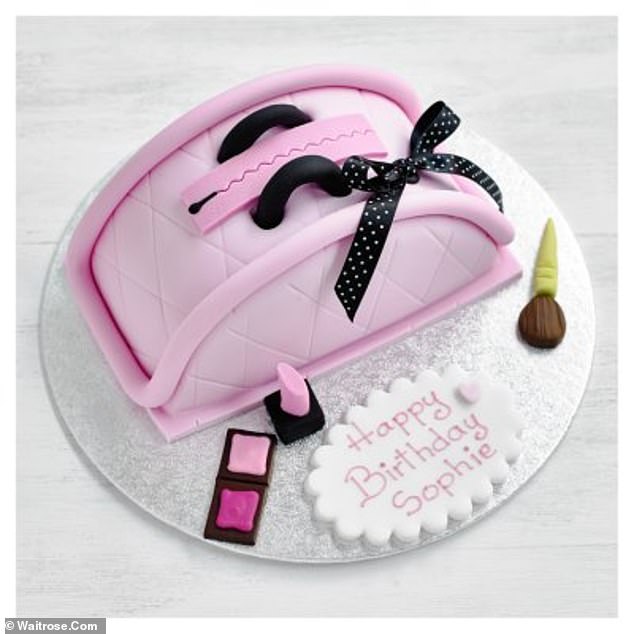 Alongside her vehement words, she posted a snap of the Waitrose website, which showed birthday cakes for girls featuring unicorns, fairies and stars.

Comparatively, boys were given a choice between fire engines, ladybirds and footballs.

The mother-of-two said she was inspired to speak out, as she worried such marketing would be damaging to her sons.

She said: ‘I think it’s so important that children are encouraged to like whatever they like. It seems madness that unicorns are for girls and football is for boys. 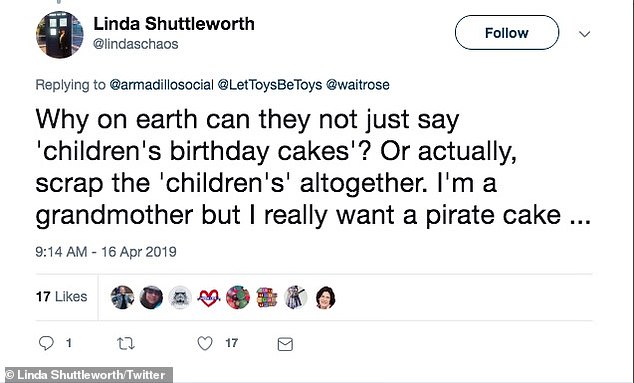 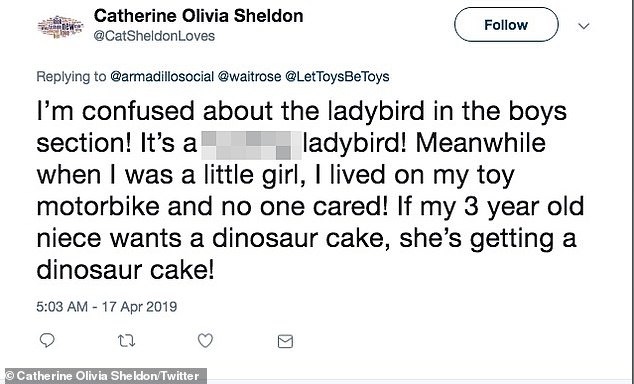 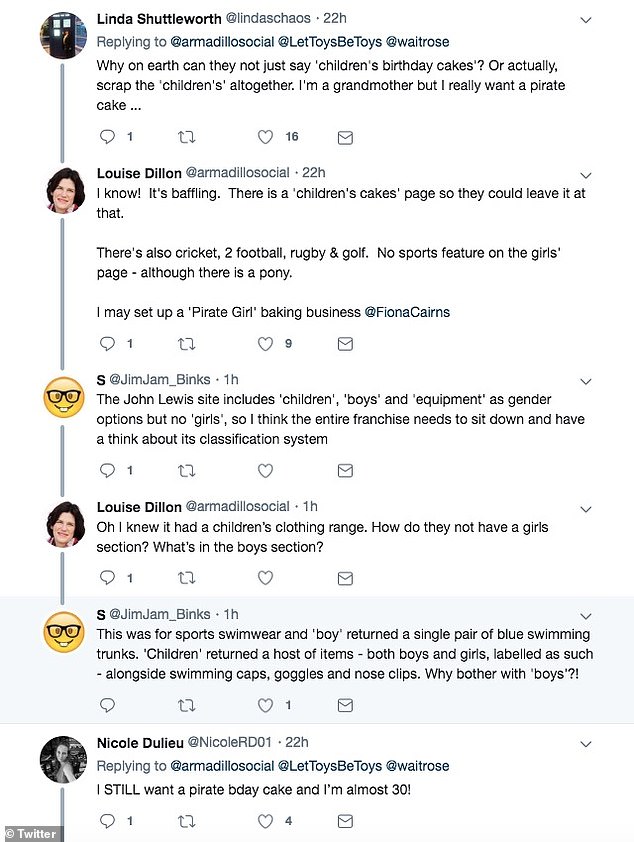 ‘It’s teaching our children that things they love are “not really made for them”, for no sensible reason.

‘I have two sons and want them to embrace as many things as possible – unicorns included – not dismiss half of them out of hand.’

Louise noted that Waitrose had yet to respond to her message.

The post attracted a flurry of comments from equally outraged consumers.

Grandma Linda Shuttleworth said: ‘Why on earth can they not just say “children’s birthday cakes”? Or actually, scrap the “children’s” altogether.

‘I’m a grandmother but I really want a pirate cake’

Similar Deborah Hughes said: ‘Where’s the hockey and netball to go alongside the football etc? For everyone, as girls and boys play ALL sports. 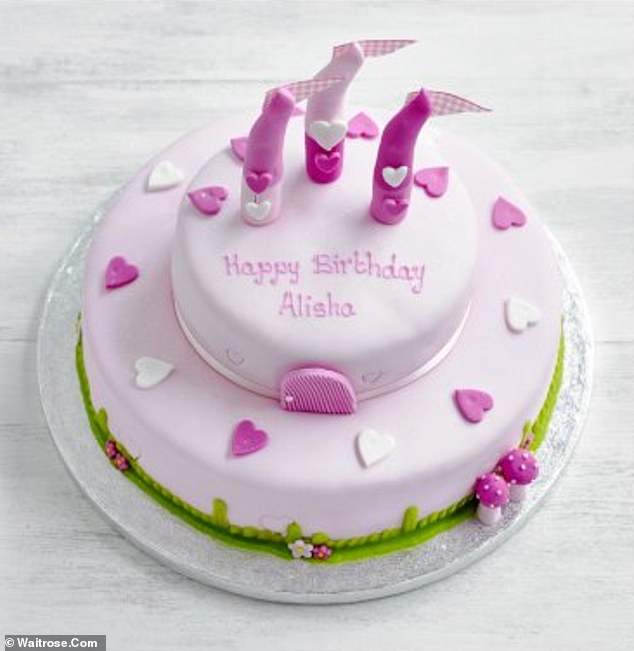 Another example of a Waitrose girl birthday cake, shaped like a pink castle. Dillon said she thought children should be encouraged to be whatever they want to be 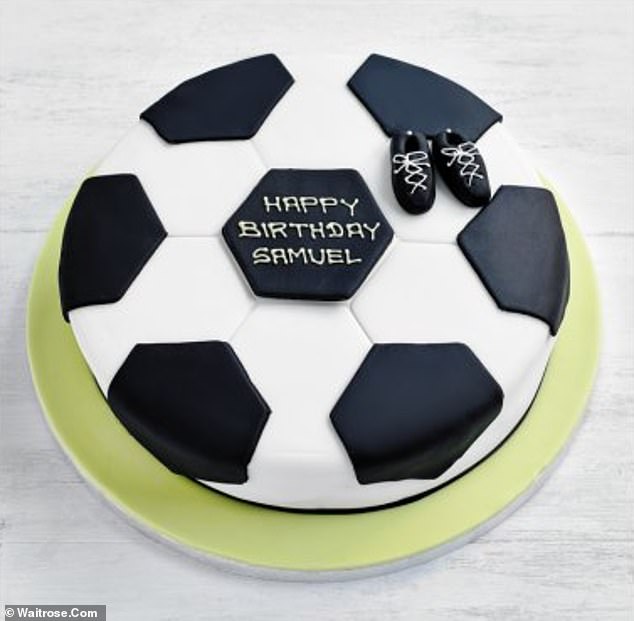 Football for boys. Another example of gendered birthday cakes sold by Waitrose. One mother pointed out that girls enjoyed sports as much as boys

‘Some people must still want to be able to search by “boys” or “girls”, which is why it’s filtered as such.

‘But by doing so Waitrose are deciding which apply to who. Sigh.’

‘Meanwhile when I was a little girl, I lived on my toy motorbike and no one cared! 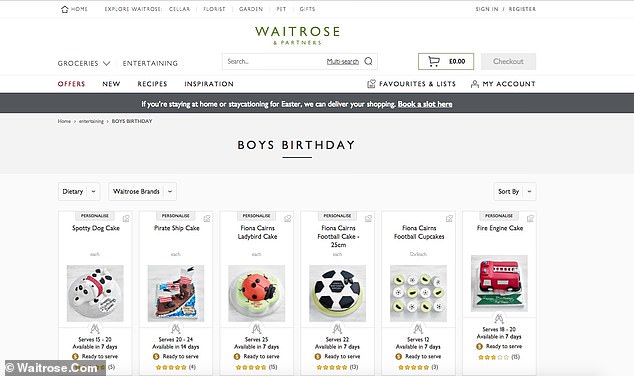 A screenshot of the Waitrose website’s boys birthday cake selection. The cakes are shaped like dogs, footballs, fire trucks, and to the confusion of some parents, a ladybug 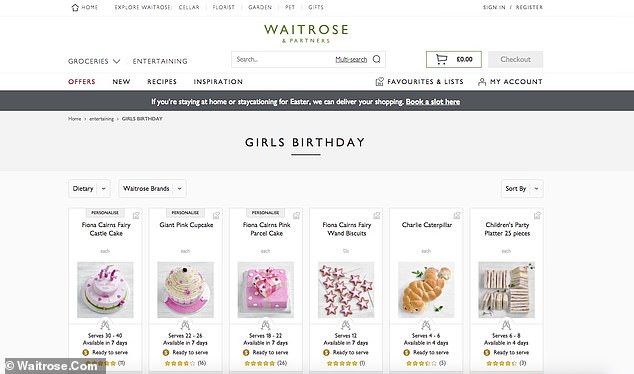 A spokesperson said: ‘It seems very strange that Waitrose have decided to label birthday cakes in this way – boys and girls can have a range of interests that aren’t limited to stereotypes.

‘It takes parents twice as long to look for a cake if they need to look in two sections and has the potential to turn children away from their true interests.’

It comes after Asda were similarly accused of reinforcing gender stereotypes last week.

Merkel tells May there is still time to negotiate Brexit deal with EU
Music and dance therapy should be prescribed for dementia patients
May Day protests: 'Armageddon' rioting breaks out in Paris
The Bulgarian connection?
Shirlie Kemp says George Michael's sister Melanie 'was one of the kindest I had ever met'
NTAs 2020: David Walliams mentions Simon Cowell's 'new face'
Bank of England governor Andrew Bailey tries to calm fears over recession
Britons hit the beach early with temperatures set to reach sweltering 79F today