Dwayne ‘The Rock’ Johnson has taken to Instagram on Thursday to wish his daughter Tia Gianna a happy first birthday.

The actor, 46, and ex professional wrestler shared a shirtless snap of himself sitting in bed with his beloved little girl as he showed off his variety of chest inkings.

He wrote: ‘Happy 1st Birthday to our strong lil’ beauty, Tia Gianna. Get used to daddy’s hands kid ~ they’ll always have your back. #puamana.’ 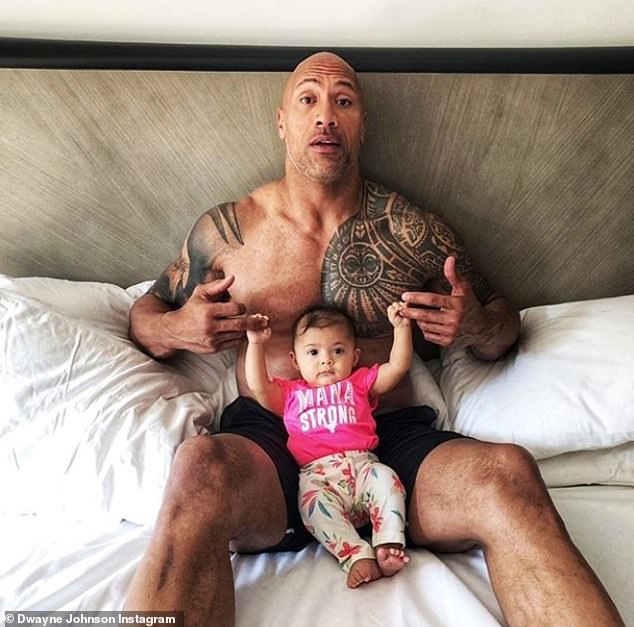 Special bond: Dwayne ‘The Rock’ Johnson wished his daughter Tia Gianna a happy first birthday with anincredibly sweet snap as he said he’ll ‘always have her back’

Dwayne regularly likes to share pictures of his children on social media, showing the close bond he has with his little ones.

The Hollywood star has been in a relationship with his longtime girlfriend Lauren Hashian since 2007.

The couple met in 2006 while he was film the Disney film The Game Plan and the couple are also parents to three-year-old Jasmine.

Dwayne also has a 17-year-old daughter, Simone, with his ex-wife Dany Garcia.

The former Merrill Lynch executive has managed a remarkably amicable connection with The Rock since they split up.

The two were married from 1997-2007, but after the split she switched careers to become his manager.

Additionally, she’s the co-founder and co-CEO of Seven Bucks Productions, a film production company involved with a spin-off for Dwayne Fast and Furious character.

In January, the pair spoke to Good Morning America on Thursday about working as a team, crediting ‘therapy’ as the answer to their continued great friendship.

‘Friendship and the expansion of wanting what’s best for everyone,’ added Dany to Dwayne’s ‘therapy’ response.

‘I had Simone when I was 29,’ said The Rock, before his ex jokingly interjected: ‘Actually, I had Simone, but you were there as well.’

‘I was flying by the seat of my pants at that time. I was in WWE, and as she’s going into a business that I have enjoyed over the years, it has brought us even closer together.’

And really proving that their family ties are stronger than ever, Dany later moved on and married Dwayne’s close friend and personal trainer, Dave Rienzi.