has paid tribute to star Sue Nicholls, as she celebrated a staggering 40 years of playing Audrey Roberts.

Taking to Twitter, the soap posted several snaps of the actress receiving a cake in her honour, which showed her character proudly perched atop the iconic Audrey’s hair salon.

After asking fans to share their favourite Audrey moment, Corrie also shared a clip of Audrey’s first ever scene on the cobbles, as she made an unwelcome arrival after discovering daughter Gail’s engagement. 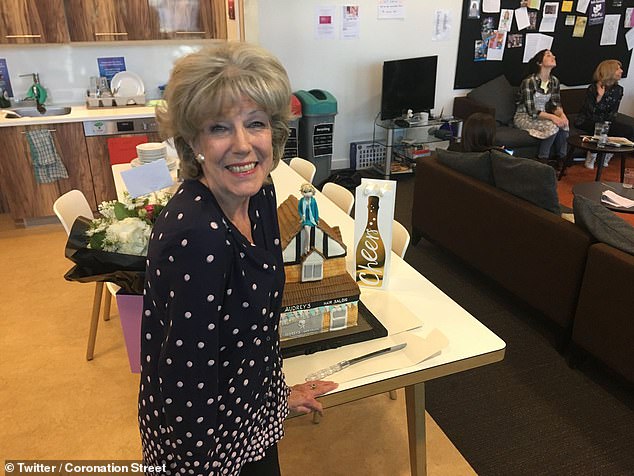 Congrats! Coronation Street has paid tribute to star Sue Nicholls, as she celebrated a staggering 40 years of playing Audrey Roberts

Corrie took to Twitter to post several snaps to mark Audrey’s 40-year anniversary, including one which showed the lavish cake she received from producers.

The caption read: ‘What’s your favourite Audrey moment? As part of the celebrations for 40 years on the cobbles for the wonderful Sue Nicholls, check out this fantastic (and very tasty) cake presented to her by producer Iain MacLeod in front of cast and crew.’

Fans then rushed to recall some of Audrey’s best moments, as they also congratulated Sue on her lengthy soap stint. 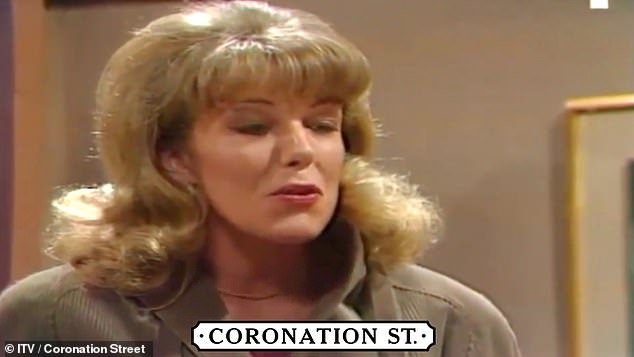 Back in the day: Sue first joined the cast of Corrie in 1979, as she made a shock arrival in Weatherfield after hearing of daughter Gail’s engagement 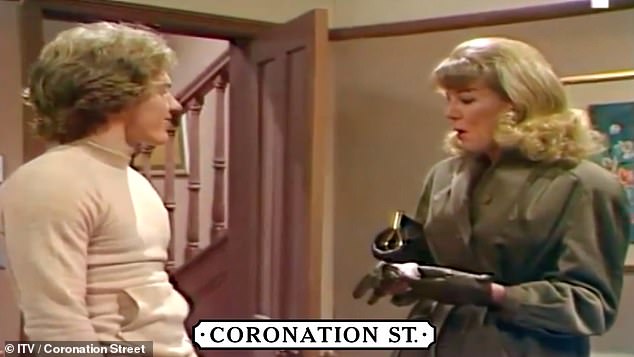 Soap star: Coronation Street also re-posted a video of Audrey’s first ever scene, as they marked the momentous anniversary 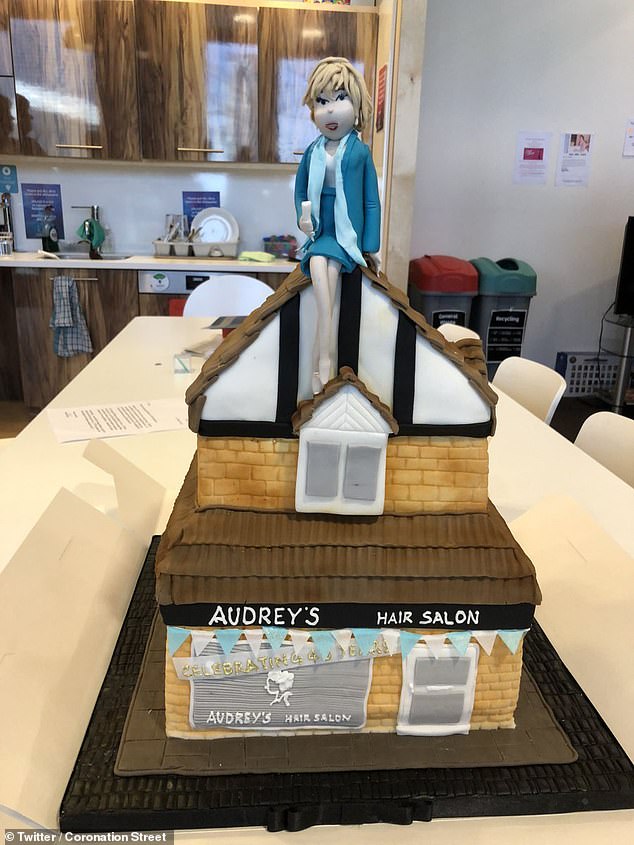 Surprise! In snaps posted to Twitter, Sue was also presented with a celebratory cake, which showed her character perched atop the iconic hair salon 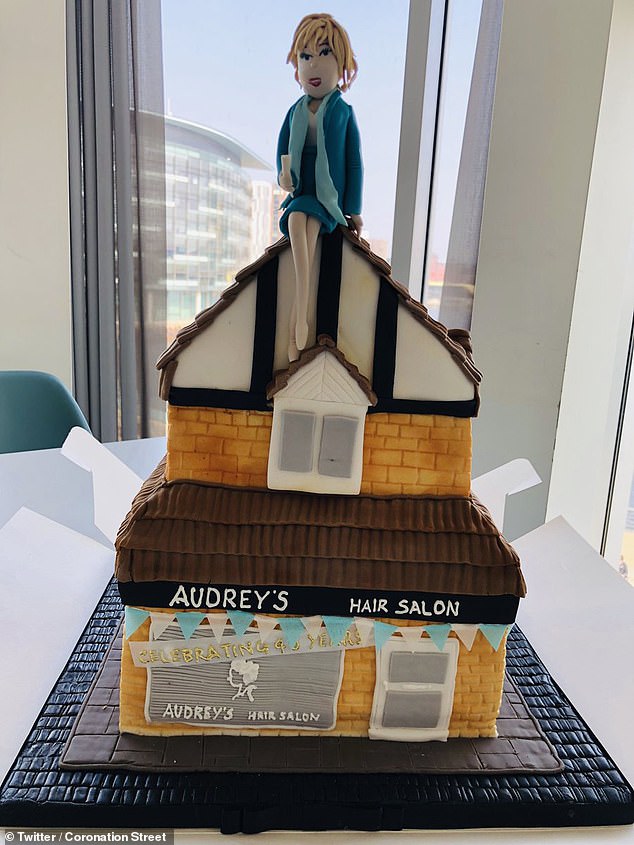 Soap legend: Corrie also asked fans to share their favourite Audrey moments, as many rushed to congratulate the star

Many also pointed out a scene which aired last year, when Audrey delivered a drunken speech which saw her hurl a bouquet of flowers at rival Claudia Colby.

One fan tweeted: ‘All great but the mic drop and flower throw was legend,’ while another added: ‘Congratulations Sue for being 40 years young on #Corrie. I wish you many happy years yet to come.’

A third also tweeted: ‘My favourite Audrey moment was when she threw the flowers at Claudia.’

Another added: ‘Anytime she says ”oh David really!” then rolls her eyes.’ 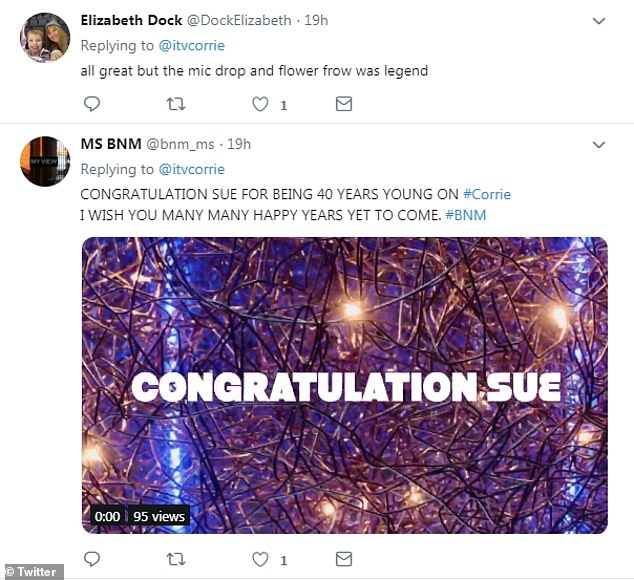 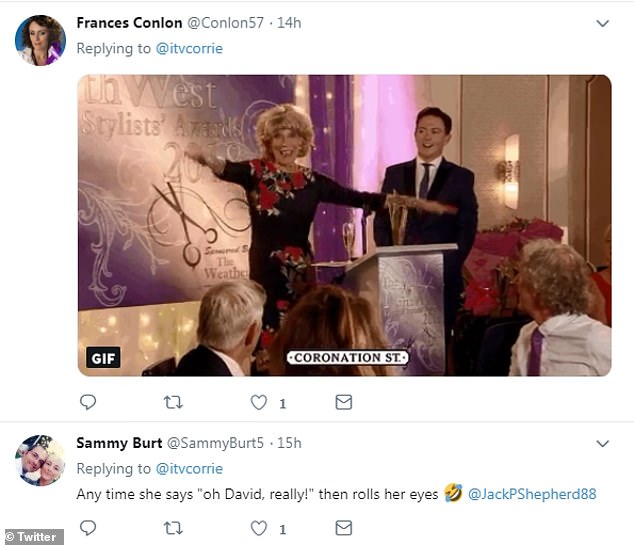 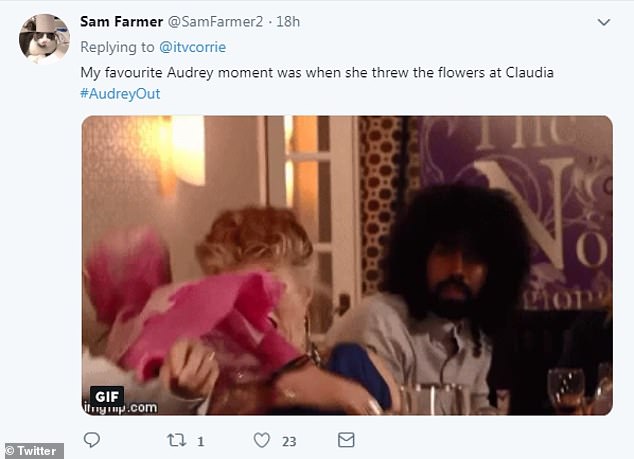 Amazing: Many fans recalled a hilarious scene from last year, when Audrey threw a bouquet at rival Claudia Colby (played by Rula Lenska) 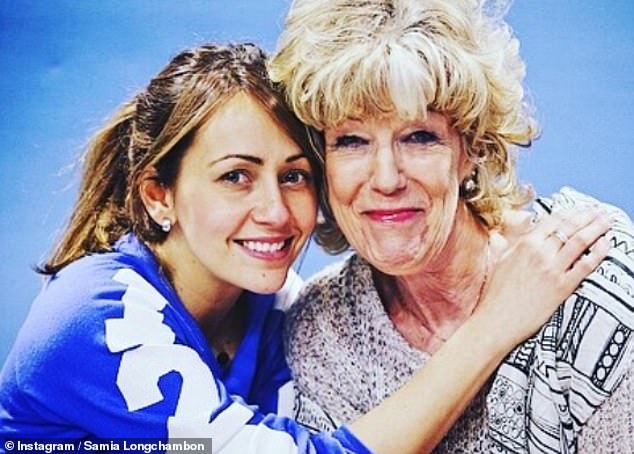 Superstar: Samia Lonchambon – who plays hairdresser Maria Connor – also posted her own tribute to Sue, after almost 20 years of working with the star

Samia Lonchambon – who plays hairdresser Maria Connor – also posted her own tribute to Sue, after almost 20 years of working with the star.

She wrote: ‘My #wcw goes to this special lady.. Our amazing Sue Nicholls who yesterday celebrated 40 years on @coronationstreet and I’ve had the honour of her being my ”boss” for nearly 2 decades of that now.

‘Like a mum to me both onscreen and off, I love her so dearly! Congratulations Sue.. see you in ”Audrey’s” later.’ 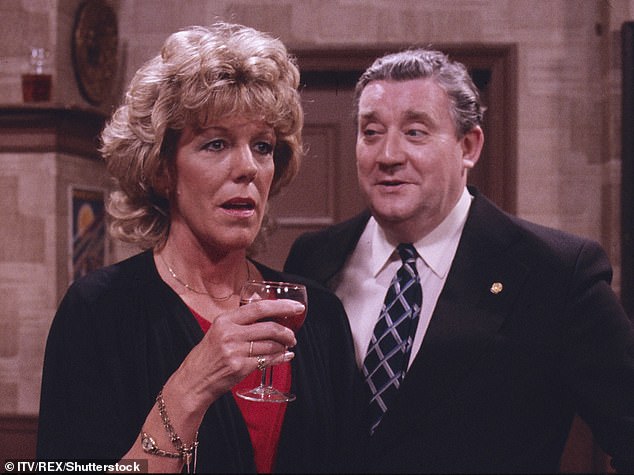 Close: A majority of Sue’s early years on the soap revolved around her marriage to Alf Ramsey, who died on New Year’s Eve 1998 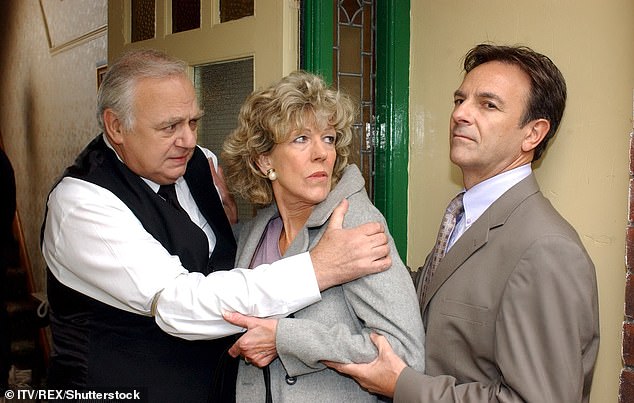 Sue joined the cast of Corrie in 1979, when Audrey made an unexpected arrival in Weatherfield after hearing of daughter Gail’s engagement, and after several recurring stints, began appearing full time from 1985.

A majority of her early years of the soap revolved around Audrey’s marriage to Alf Roberts (Bryan Mosley), who died of a heart attack on New Year’s Eve 1998.

In the later years – after opening her own hair salon – Audrey struck up a romance with the charming Lewis Archer (played by Nigel Havers), but the schemer eventually cons Gail out of their savings, before fleeing Weatherfield.

Audrey was also close friends with Alma Haliwell (Amanda Barrie), and in tear-jerking scenes sat at her side when the supermarket manager passed away from cervical cancer in 2001. 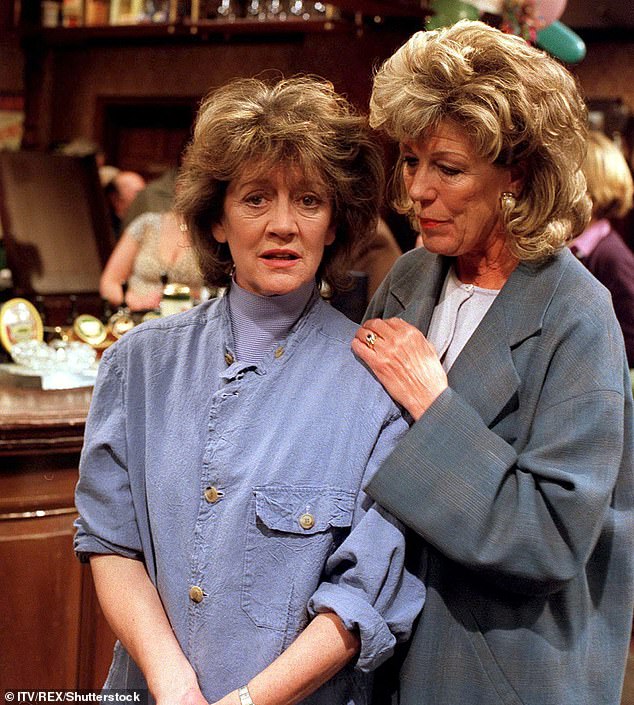 Best friends: Audrey was also close to Alma Haliwell (Amanda Barrie), and stayed at her side when the supermarket manager passed away from cervical cancer in 2001