An engineer who gets ‘pleasure’ from being suspended by her skin from metal hooks has revealed how the unusual practice has helped her combat anorexia and body dysmorphia.

Breanna Cornell, 26, from Flagstaff, Coconino County, Arizona, said that although having sharp objects threaded into her skin was initially uncomfortable, the fear and excitement was also thrilling.

Since being introduced to suspension two-and-a-half years ago, she has taken part in the practice 12 times – even though it is illegal in her county, as it is considered a medical procedure unless carried out by a doctor.

The marathon runner believes her hobby provides her with an outlet for her emotions and she usually does it when the weather is cooler.

‘There is certainly a connection for me between long-distance running and suspending that accounts for why I enjoy them both so much,’ she explained.

‘There is that feeling of fear and adrenaline at the start that then becomes an almost calm-like meditation once you get going, and then the overwhelming feeling of achievement at the end.’ 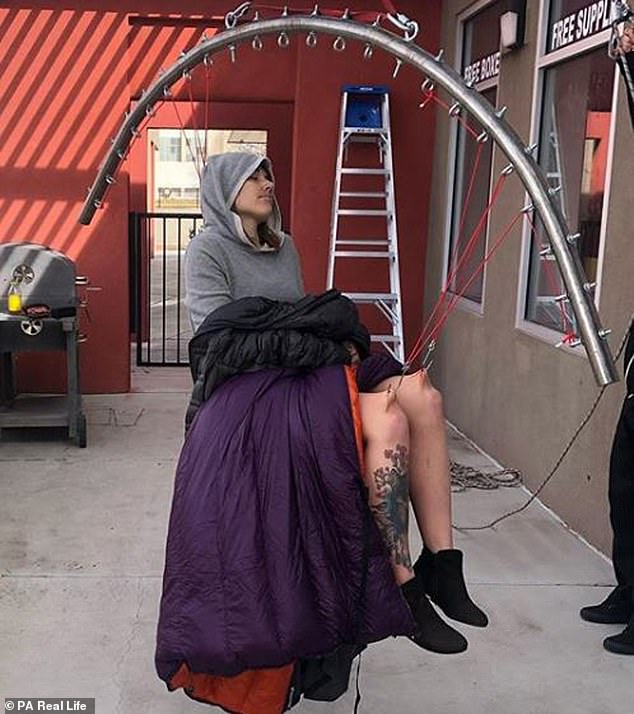 Breanna Cornell, 26, from Flagstaff, Arizona, says she gets ‘pleasure’ from being suspended from hooks that are attached to her skin (pictured), insisting it helps her combat anxiety 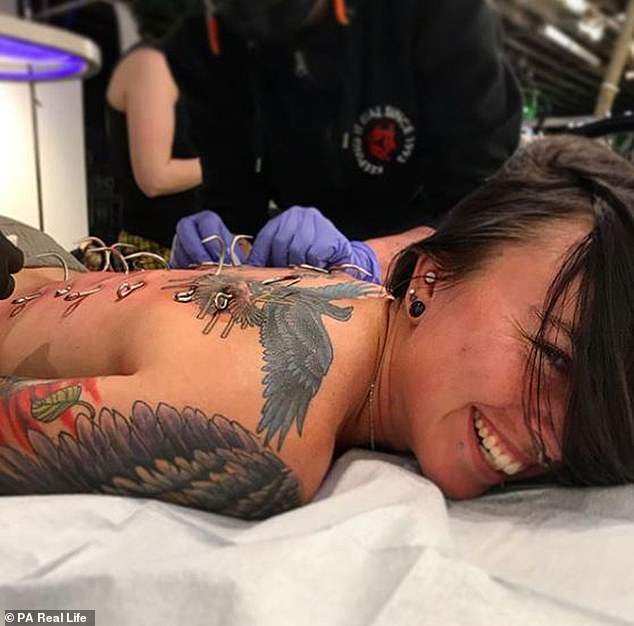 Since starting the hobby two-and-a-half-years ago, Breanna, pictured with hooks in her back, has been suspended from her skin 12 times

She continued: ‘My response to each suspension really varies on my mood. If I am happy then I will have a lot of fun and swing around a bit.

‘But if I am feeling a bit stressed then it can be really nice to get into a more static position like the hammock – where you are sitting into the suspension with your knees and shoulders hooked. That way, I can sit comfortably for hours and just relax.’

Breanna completed her first marathon just after leaving school in 2010, but soon set her sights on greater goals than 26.2 miles and in 2012 was competing in ultra-marathons in Africa.

Around the same time, and while studying environmental engineering at Michigan Technological University, Breanna developed a penchant for body modification. 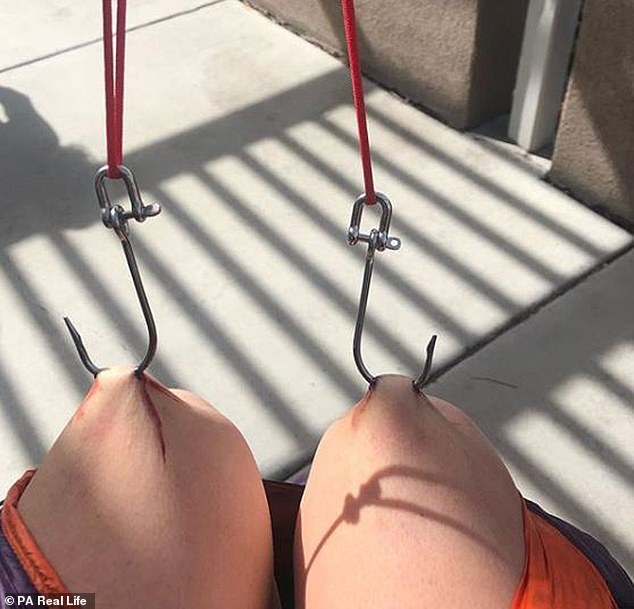 When she first started suspending, Breanna, seen with two hooks in her knees, said it was uncomfortable but that the fear was also exciting

She had her first tattoo, a wing on her foot, aged 18, followed by a series of piercings on her ears and nose.

‘Growing up, I had had a lot of problems with anorexia and body dysmorphia, where you have a very negative perception of your body,’ said Breanna.

‘I liked getting piercings and tattoos of drawings that I had made, because it allowed me to look at my body and focus on them instead of the way I looked.’

At this point hook suspending was not yet on her radar, although she was aware of it, but viewed it as ‘gory and unpleasant.’

That changed in April 2016 when Breanna – who now has three piercings on her nose, seven on her left ear and five on her right, as well as tattoos on both thighs and arms, her back and chest, and a split tongue – joined her then boyfriend, a suspension enthusiast, at an event. 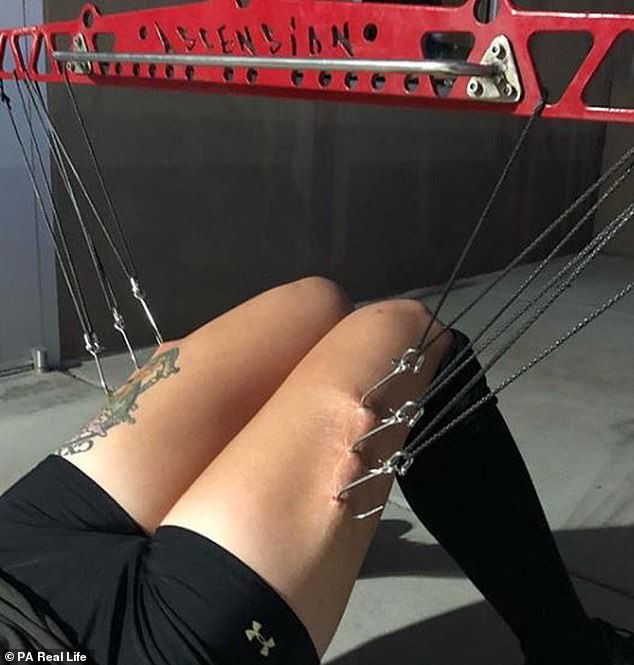 Breanna said her response to each suspension, pictured, varies on her mood and that if she’s feeling happy she will swing around a bit during the session 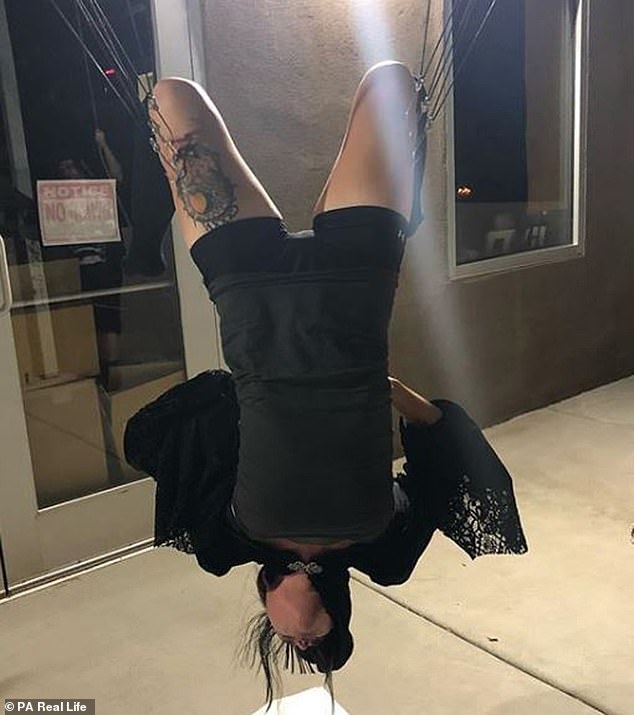 It was while studying environmental engineering at Michigan Technological University that Breanna, pictured while suspended upside down, developed a liking for body modification 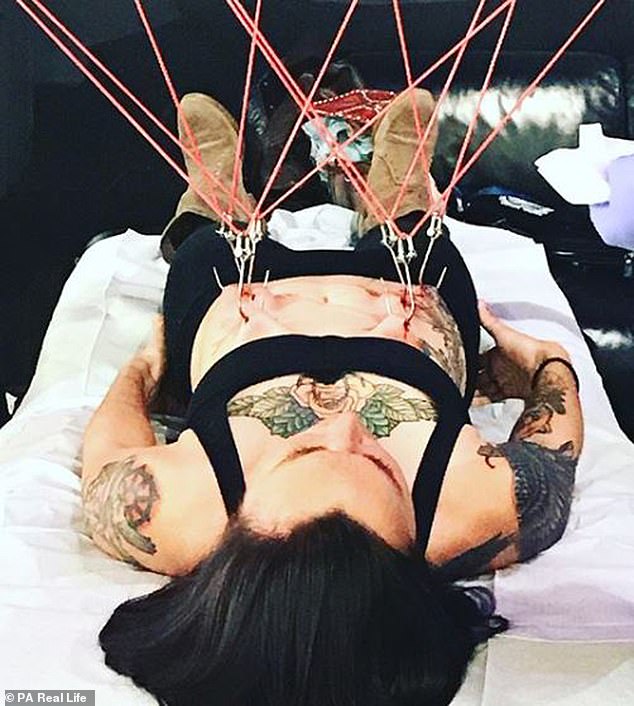 At first Breanna, pictured during a session, thought the hobby was ‘gory and unpleasant’ but she quickly learned to love it

Watching him being strung up by a professional piercing artist at a studio in Phoenix, Arizona – where suspension is legal – she was fascinated.

‘Up until that point, I didn’t think it was for me at all. It looked very scary and frankly quite gory,’ she explained.

‘But then, as soon as I saw it for myself, I knew immediately that this was something I wanted to do.’

She would have to wait another six months, however, before she could be hooked up herself, during which time, she and her boyfriend parted.

In October 2016, having arranged a session with the same piercing artist in Phoenix, costing $100 (£75), Breanna recalled: ‘I was really, really nervous beforehand and was sick twice because there was so much adrenaline pumping through me.’ 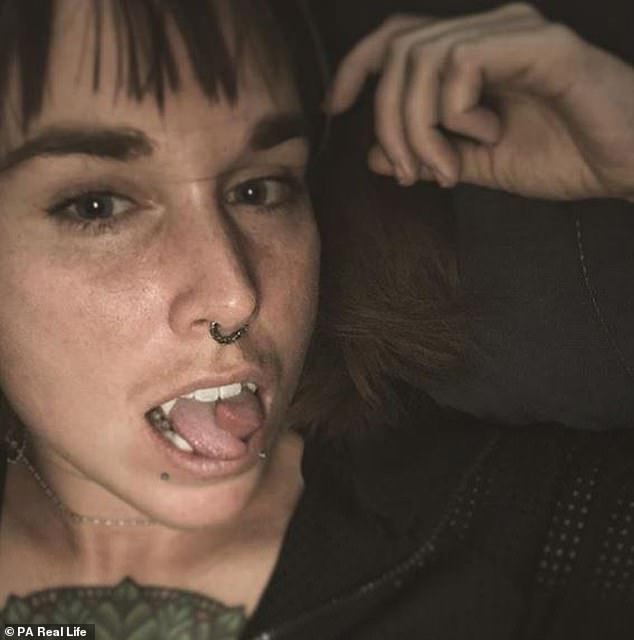 Breanna, pictured, has three piercings on her nose, seven on her left ear and five on her right, as well as tattoos on both thighs and arms, her back and chest, and a split tongue The suspension enthusiast’s first session cost $100 (£75) and she was sick twice beforehand due to the ‘adrenaline’. Breanna is pictured smiling with two hooks in each of her arms

‘I was put in the “suicide” position, so called because it looks like a person hanging as the hooks are through the skin at the top of your back, and there was a lot of fear to overcome, as I lifted my final toe off the ground, as it felt so unnatural.

‘But once I was up there, suspended five feet off the ground, I had a rush of immense joy and it felt as though I was weightless and floating.’

Staying suspended for half an hour, Breanna knew as soon as she was eventually let down that she would have to do it again.

So, six months later, she returned – this time being rigged up in a ‘superman’ position, flying forwards with 10 hooks along her back and legs.

Despite the inevitable pain experienced by hook suspension – which has been practiced by Native Americans for hundreds of years – Breanna insists she is not a masochist.

She sees the pastime more as an artistic and emotional expression, while admitting that she does enjoy challenging her body. 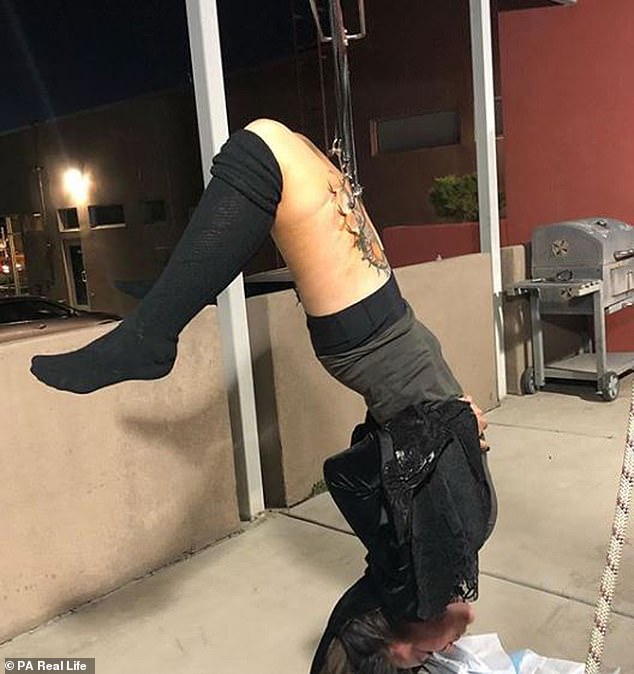 Breanna, pictured upside down with hooks in her legs, said that pleasure doesn’t come from the pain but from being able to push her body to its limits 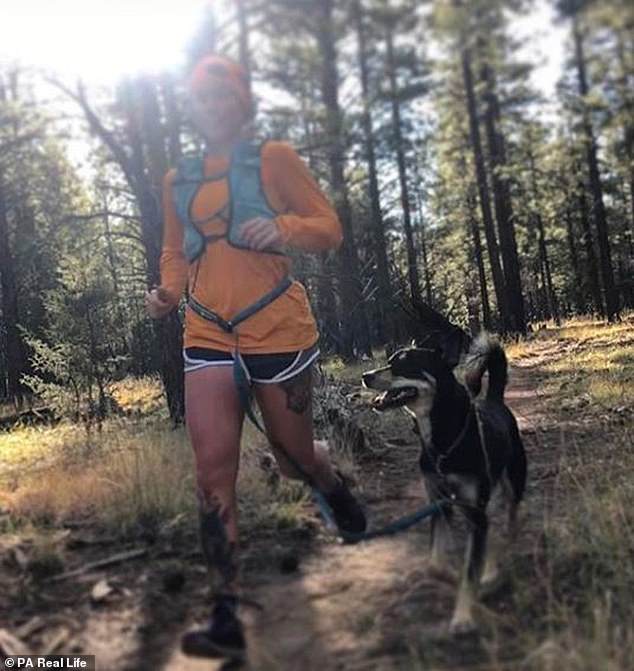 Breanna, pictured with her dog Sophie, is also a long-distance runner and completed her first marathon just after leaving school in 2010

‘I wouldn’t say that I derive my pleasure in suspending – or marathon running for that matter – from the pain, but I would certainly say that I like being able to push my body to its limits, which does involve some amount of pain,’ she explained.

‘For thousands of years, humans have endured pain as part of daily life, but in the modern world we have been able to live pain free.’

‘This seems to me to make us lacking at a genetic level as pain is an essential element of human existence and I, for one, couldn’t do without it.’

Despite its long history and growing popularity around the world, hook suspension is not without its detractors, some of whom Breanna has encountered.

‘I realise that not everyone will understand the appeal. One person I know said it was “appalling.” But that’s why I often try to compare it with marathon running – a much less maligned pastime,’ she explained.

‘There is just as much pain involved in running long distances, but you don’t necessarily do it for that reason – you do it for the satisfaction of having pushed your body. And that, for me, is one of life’s greatest joys.’ 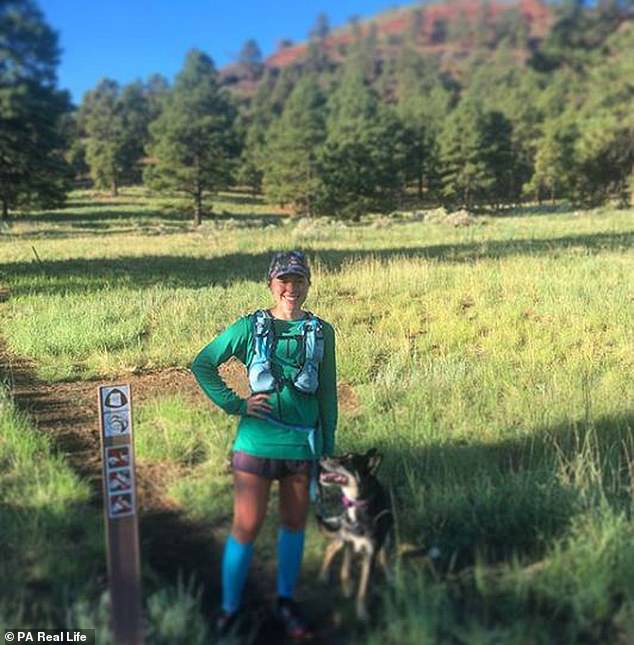 Breanna, above with her dog, said there’s just as much pain involved with long distance running which is a ‘less maligned pastime’ 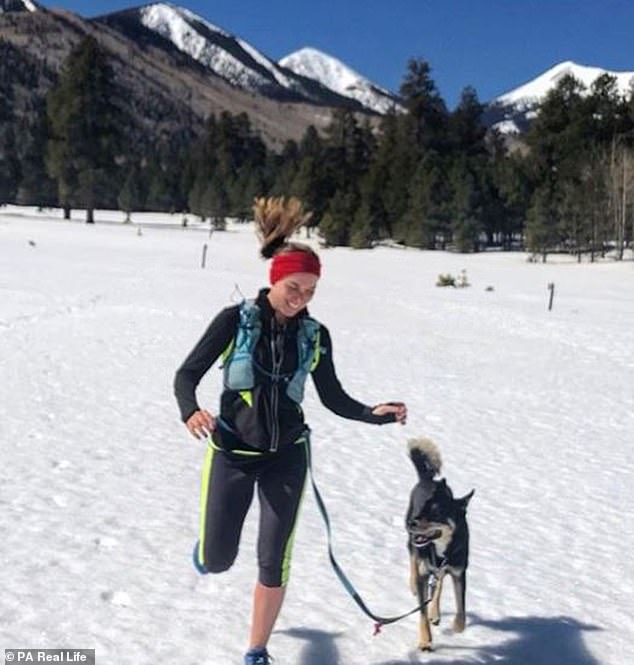 The graduate, pictured running with her dog Sophie, has to be suspended in Phoenix, Arizona where the practice is legal

What became of Kate’s jolly hockey sticks friends at Marlborough
Ministers say BBC Panorama's claim that Universal Credit causes hunger and suffering is ‘fake news’
Chubby stars don't get any sex scenes and are usually only cast as 'the fat friend'
Trump says Robert Mueller should NOT testify in Democrat-led House hearing
Jamie Oliver and wife Jools boasts of their wealthy lifestyle with glimpse into £8.9million mansion
Murder investigation launched after man, 35, is stabbed to death in north east London
Coronavirus UK: Death toll hits 19,499 with 684 new fatalities
British holidaymakers reveal how they made a last-minute dash from Croatia