The British Board of Film Classification (BBFC) said that despite a new law to require age checks to block access to those under 18 ‘determined teenagers will find ways to access pornography’.

Age restrictions on viewing adult videos and images, the first in the world, will come into effect on July 15, Digital Minister Margot James said.

In a question and answer section  the BBFC says that it will ‘primarily’ target adult websites with high volumes of traffic but be partly reliant on whistleblowers to tell it about smaller sites breaking the law.

It admitted that the new law, part of the Digital Economy Act 2017, is mainly aimed at children who accidentally ‘stumble across pornography on commercial pornographic websites’.

The move, which applied to sites whose content is more than a third pornographic, has been designed to cut the number of children who are freely able to access extreme material on the internet.

But it has been criticised by freedom campaigners and others who fear that making people give personal details to websites leaves them open to fraud and blackmail – though firms involved say they are secure and information is anonymised.

One age verification system, AgeID, last year launched the PortesCard. It is due to  be available from ‘selected high street retailers and any of the UK’s 29,000 PayPoint outlets’, the firm said, costing £4.99 for a single device and £8.99 for more than one.

People buying it would have to show age ID int he shop but not online.

Various apps and websites are available to prove your age online but they require you to enter personal information which is then stored. 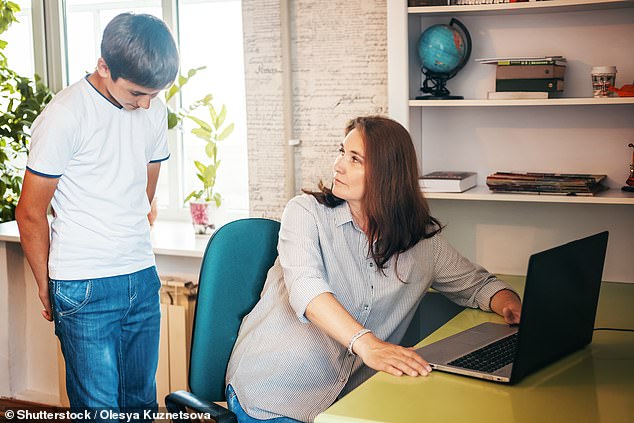 Under the current scheme adult websites will have to provide their own verification software, which will then have to meet standards and checks carried out by the British Board of Film Classification (file image posed by models) 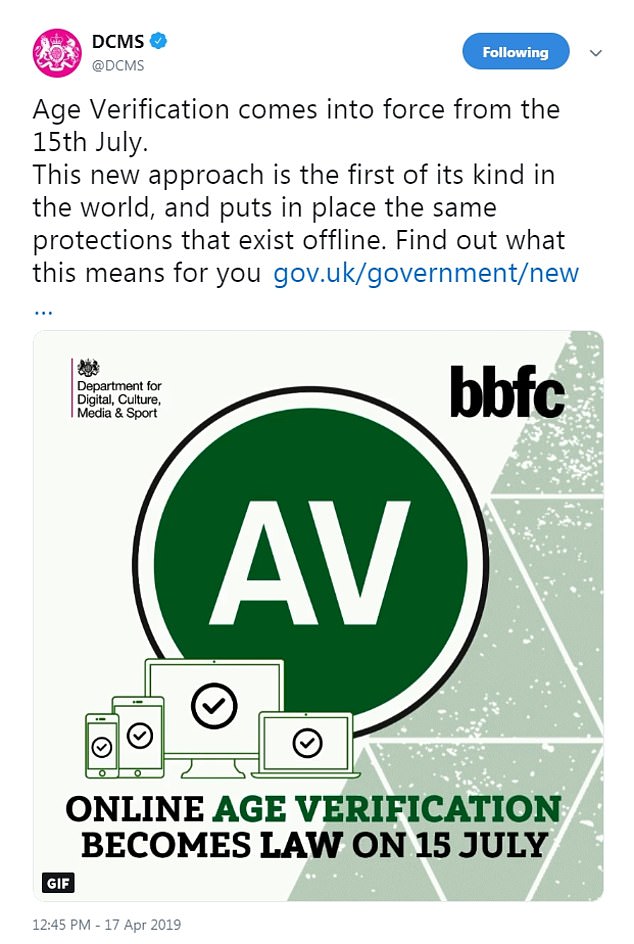 There are several ways they can do this:

On the website the BBFC said: ‘Age-verification is not a silver bullet.

‘Some determined teenagers will find ways to access pornography.

‘However, children will no longer stumble across pornography on commercial pornographic websites.

‘Research carried out on behalf of the NSPCC and Office of the Children’s Commissioner (OCC) shows children are as likely to stumble across online pornography as to search for it.’

It also added that it would ‘act proportionately’ in enforcing the new rules.

‘So we will primarily investigate sites with high volumes of traffic, but also carry out spot checks on less visited sites.

‘Additionally, we’ll consider investigating sites that are reported to us by charities, stakeholders and individuals.’

The Department of Digital, Culture Media and Sport said that the law change was ‘backed by 88 per cent of UK parents with children aged seven to 17, who agree there should be robust age-verification controls in place to stop children seeing pornography online’.

‘The introduction of mandatory age-verification is a world-first, and we’ve taken the time to balance privacy concerns with the need to protect children from inappropriate content. 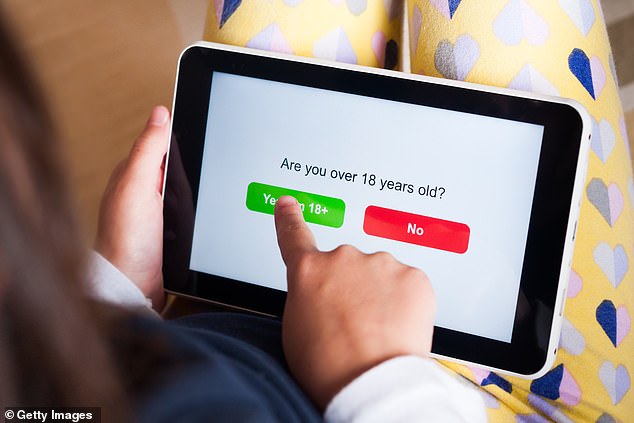 ‘We want the UK to be the safest place in the world to be online, and these new laws will help us achieve this.’

Adult websites will have to provide their own verification software, which will then have to meet standards and checks carried out by the (BBFC).

Its website says: ‘Similar age-verification processes are already in place for UK-hosted pornographic video-on-demand services, online betting, poker, and other age-restricted products and services. So we know it works.’

It has created a ‘voluntary certification scheme’ called the Age-verification Certificate (AVC), which will ‘assess the data security standards of AV (age verification) providers’.

The start date of the scheme, introduced in the 2017 Digital Economy Act, has been put back several times.

Back in November Mrs James said she hoped legislation would be in Parliament before the end of 2018 but that websites would need time to ‘get up to speed’ after.

She told the Science and Technology Committee’s inquiry on November 13, that the impact of social media had taken longer than hoped but ‘we have got it right’.

‘Age-verification will help prevent children from accessing pornographic content online and means the UK is leading the way in internet safety.

“On entry into force, consumers will be able to identify that an age-verification provider has met rigorous security and data checks if they carry the BBFC’s new green ”AV” symbol.’

An NSPCC spokeswoman said: ‘Exposure to pornography can be damaging to young people’s views about sex, body image and healthy relationships, as we regularly hear from children who contact our Childline service.

‘We want to make sure that when these new rules are implemented they are as effective as possible and protect children from coming across sexually explicit content.

S.Africa fires kill 7 including baby, pregnant woman
Parents of woman killed during a date on a speedboat trip urge fugitive to hand himself in
Fisherman saves a beached shark's life by carrying it back into the sea in 'beautiful' moment
Pictured: 'Wonderful' mother-of-four who was viciously stabbed to death
Brexit petition to revoke Article 50 soars past three million signatures
Cyclist shoots out of a blind junction and crashes head-first into car windscreen
Misery for families travelling to France as drivers face three-hour delays in 'gridlock' at Dover
Sport Relief 2020: Cheryl left shocked over Kimberley Walsh's dance performance