A middle-aged woman who wears a devil mask is one of three suspects being hunted by police over a spate of acid attacks on cars in tiny village.

Six vehicles have been targeted by the vandals over the last 18 months in St Briavels, in the Forest of Dean, Gloucestershire, which has a population of 1,000.

One resident has captured CCTV images of a woman in the mask with a black curly wig, who threw the acid over her Land Rover Freelander.

The mask and wig were later found and locals are now offering a reward of £2,000 to whoever catches the culprit. 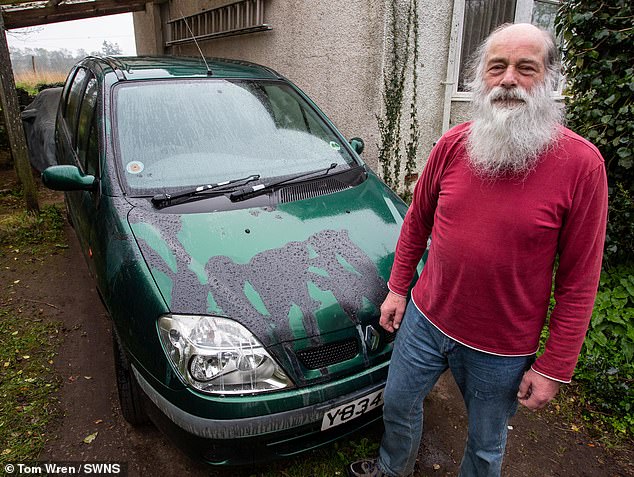 John Hurley, a semi-retired music teacher (pictured) is the latest victim after his Renault Megane Scenic was so badly damaged it could be a write-off 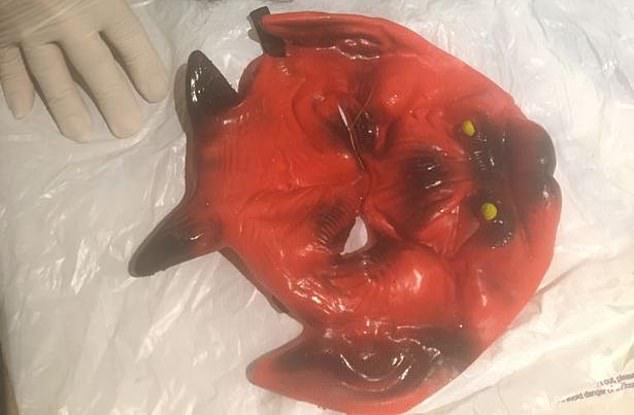 One resident has captured CCTV images of the woman wearing this mask, which was later recovered by a homeowner

She is also suspected of posting pornographic material through letterboxes.

Security cameras have captured two other suspect attackers – a bald man who was seen pouring acid on one car and a younger man with a hoodie and scarf over his face.

John Hurley, a semi-retired music teacher, is the latest victim after his Renault Megane Scenic was so badly damaged it could be a write-off.

The gel-like acid stripped its paint back to bare metal, melting the plastic wipers and headlamps. A plastic spatula used to scrape it off also melted.

Mr Hurley, 73, said: ‘Luckily I was aware of the previous attacks so as soon as I saw it I knew straight away what it was. 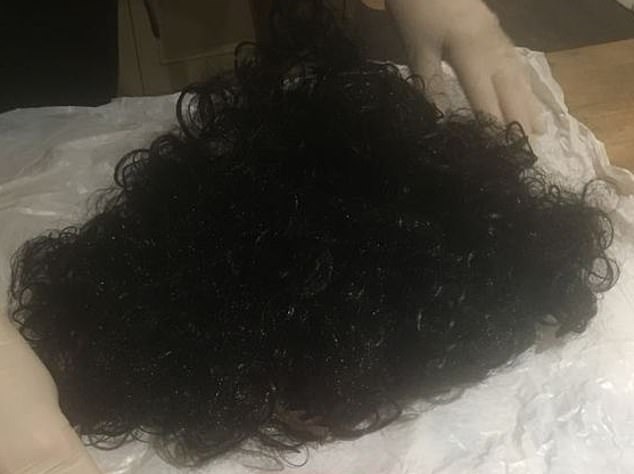 Also discovered was this black wig, which was worn by one of the suspects who carried out the attacks 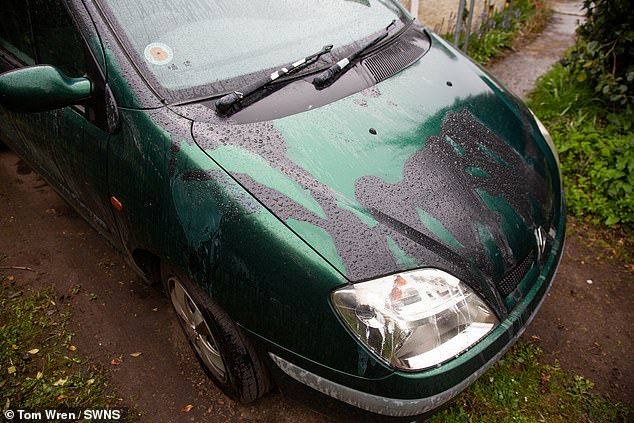 ‘If I hadn’t known and touched it, it would have been disastrous. I teach music and the acid would have damaged my fingers.

‘It’s devastating to think there are people in our community who could do such a thing.’

He said he parked the car in the drive at 6pm.

‘The following morning I went outside and I was devastated,’ he said.

‘The whole thing didn’t sink in straight away. I’m angry and sad that we’ve got people who would do that in our close community.’

He said he’d talked to his insurers and the attack would mean he would have to scrap his car.

He added: ‘Police appear to be taking it very seriously. They will be caught. It’s only a matter of time.’

Tens of thousands of pounds of damage was also caused to five other cars and a motor home.

Another victim, who also filmed the attackers on CCTV, declined to be named. 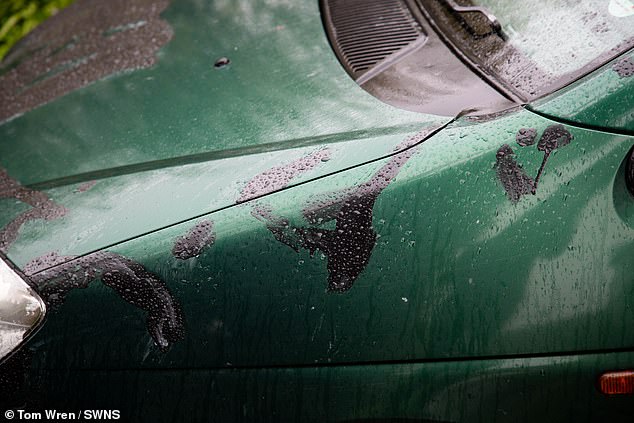 The gel-like acid stripped its paint back to bare metal, melting the plastic wipers and headlamps

They said: ‘Our home security cameras showed at least two people involved in the attack on our vehicle and property.

‘The pair pulled up in a vehicle.

‘One was a stout bald middle-aged man wearing glasses, accompanied by a tallish middle-aged woman who was wearing a devil’s mask, black curly wig, a poncho and boots with a distinctive thick white sole, who proceeded to throw acid all over our black Freelander.

‘A wig and devil’s mask matching the security footage was later recovered along with an acid bottle cap, which was handed to the police scenes of crime investigators.’ 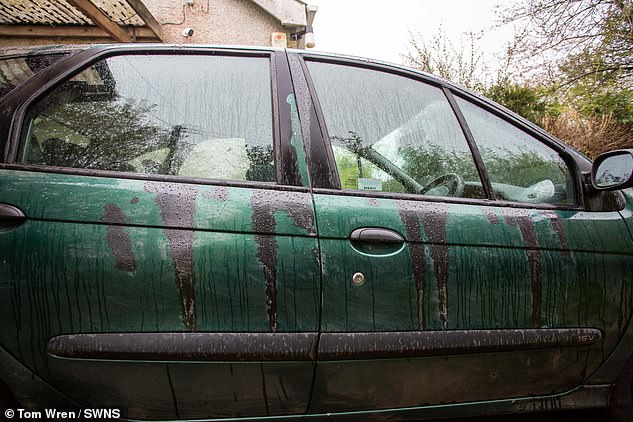 Another resident captured CCTV of a young man wearing a hoodie and scarf who threw acid over their vehicle.

They said: ‘It would appear these are copy-cat attacks carried out by a small group of people.

‘My wife or I could have easily disturbed them during the attack and been seriously injured or maimed for life.’

Parish councillor Andrew Clarke says letters and pornographic material has been posted through local letterboxes and catflaps in the middle of the night. 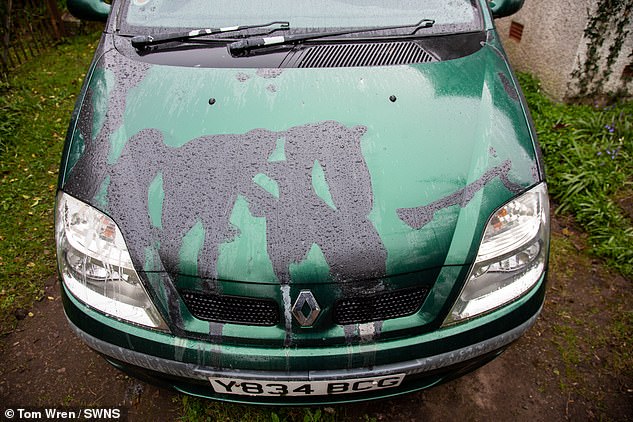 He fears the attackers could throw acid over a victim if they are caught in the act.

He said: ‘Let’s not forget this latest attack was on a 73-year-old music teacher who was actually shaking like a leaf afterwards.

‘John is a lovely, inoffensive man who does a lot for of voluntary work in the local the community. They need to catch those responsible before it escalates.

‘Can you imagine if somebody caught the perpetrators in the act? They are likely to throw the acid over them and run.

‘This stuff is absolutely lethal and takes no prisoners. Somebody could get really hurt if the police do not catch those responsible soon.’ 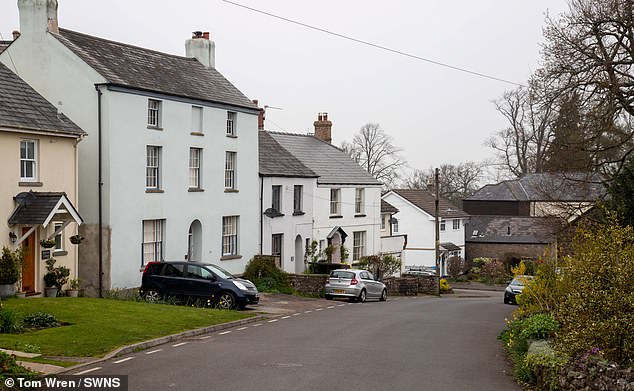 Mr Clarke said the community is beginning to rally around the victims and contributed to a substantial reward to help catch those responsible.

Chris McFarling, parish and district councillor, said: ‘The parish council condemns these acts of violence and we hope the police will bring the perpetrators to justice.’

Acid attacks on people have doubled since 2012 and sentencing guidelines have been changed so it is now listed as a weapon, meaning any adult caught carrying acid twice or threatening to use it should receive a mandatory six-month prison sentence.

A Gloucestershire Police spokesperson said: ‘On Friday, March 22 we received a report of criminal damage in the St Briavels area where unknown offenders had poured acid over a car.

‘The car, a Renault Megane Scenic, was extensively damaged during the incident, which happened between 6pm on Thursday March 21 and 10.25am the following day.

‘Anyone with information is asked to contact Gloucestershire Constabulary on 101 quoting incident 212 of March 22.’

Celebrity Big Brother: Dan Osborne finishes in THIRD place
The world's weirdest homes: CHRISTOPHER STEVENS reviews last night's TV
How long will Brexit be delayed, can it be cancelled and will there be a second referendum?
Andrea Leadsom calls for a 'managed exit' from EU and rules out a second referendum
China's president puts out terms for ending the trade war with the U.S.
Duchess of Cambridge's brother James Middleton CONFIRMS engagement to French Alizee Thevenet
Queen's aides say announcement on Megxit deal 'imminent'
Behind the scenes at Boris Johnson's Brexit night party