Watching shows like Sex Education and 13 Reasons Why are encouraging teenagers to drink , engage in sexual activity and smoke, a study has found.

Youngsters who were exposed to combinations of ‘risky’ behaviour, such as sex and alcohol, were more likely to engage in similar behaviour themselves.

But, the team of scientists discovered that scenes only depicting one risky behaviour, such as sex on its own, were not enough copy them. 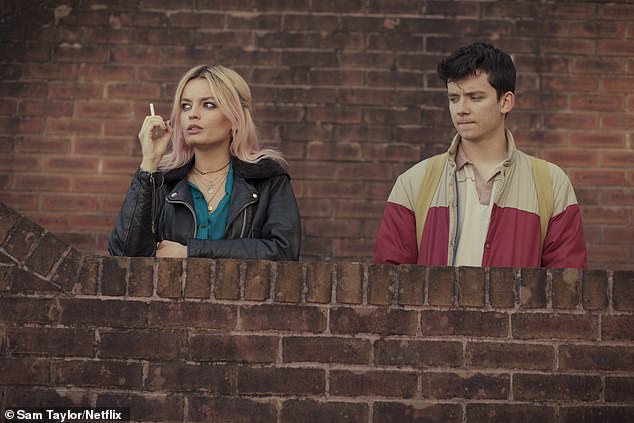 Teen TV shows like Sex Education (pictured) and 13 Reasons Why are exposing young people to a heady combination of alcohol, sex and smoking that’s difficult to resist. That’s the finding of a team of scientists who looked at the effects portrays of ‘risky’ behaviours in the media

Researchers from the University of Pennsylvania found that exposure to alcohol and sex in the media in general resulted in more glamorised and positive perceptions of drinking, sex and smoking.

Exposure to the sex only, alcohol only, and no risk videos did not influence any attitudes or norms.

They made the findings by asking more than 300 young people, aged 14 to 17, to view one of four types of video clips from TV program Empire and say the findings apply to any show with these four themes in.

These clips combined alcohol and sex, and then a more risk-taking behaviour, smoking, alone.

They were also shown scenes with sex only, alcohol only, and no risk.

While sex and alcohol combined increased favourable attitudes towards this onscreen behaviour, clips depicting sex only or alcohol only did not influence the adolescent perceptions.

Writing in the paper, it’s authors said: ‘The purpose of this study was to determine whether media effects associated with exposure to multiple risk behaviours in television content have specific or more general effects on attitudes and norms associated with performing these behaviours. 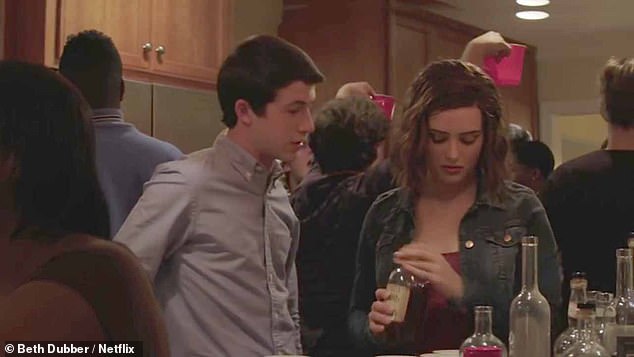 Experts discovered that scenes depicting one risky behaviour, such as drinking in 13 Reasons (pictured), were not enough to encourage teenagers to adopt the habit. Combinations of a number of risky behaviours, were found to lead to teenagers viewing them more positively

‘We tested the content effects on behavioural attitudes and norms for performing each of the behaviours.

Previous research has found that the average age a person first tries alcohol is now 13.

A World Health Organization (WHO) report found excessive drinking is associated with an increase in domestic abuse, particularly men towards women.

The abuse can be physical, such as beating; psychological, like constant belittling; forced sexual intercourse; or controlling behaviour, such as isolating a person from their loved ones.

According to the WHO, this abuse may be caused by the belief that alcohol causes violent behaviour and therefore drunk people use this as an excuse.

In Australia, restricting the hours alcohol was in sale in one town reduced the number of booze-related domestic violence cases that ended up in hospital.

A coupon-based alcohol rationing system in Greenland in the 1980s, which entitled adults to 72-beers worth of booze a month, led to a 58 per cent reduction in police call outs for domestic abuse.

Those in problem relationships may drink to help themselves cope, however, this combined with pre-existing issues may cause abusive behaviour, the report states.

While abuse can cause physical injury, including miscarriages in pregnant women, it is also linked to emotional problems like suicidal thoughts and depression.

The WHO believes reducing social tolerance towards excessive drinking, along with the expectation of men to act masculine, may help to combat abuse.

Audrina Patridge and Ryan Cabrera 'split for second time'... after having first dated in 2010
O'Rourke lays into Cruz as polls widen in Texas Senate...
86 Haitian migrants rescued from packed, dangerous...
Lamborghini Urus review: We test the super SUV on UK roads
BBC accused of 'outrage overspend' after splurging £86MILLION of taxpayer cash on new set
Builder, 51, is named as the winner of a £76 million EuroMillions jackpot
David Cameron reveals he reacted with 'hilarity' to pig claim
Cops blast lockdown rules that 'make no sense'