Britain cannot be treated like a second class member while it remains an EU member state ahead of , a top European politician has warned.

Donald Tusk used a speech to euro MPs in Brussels to urge them not to give in to ‘fear and scaremongering’ claims that the UK could use extra time inside the bloc to ‘disrupt’ its activities.

To muted applause in Brussels today the European Council president said that the UK had been a ‘constructive and responsible’ member state throughout Brexit talks, adding: ‘We have no reason to believe this will change.’

He also said the the UK ‘will’ take part in European elections, despite ‘s wish to have left before the May 23 poll. 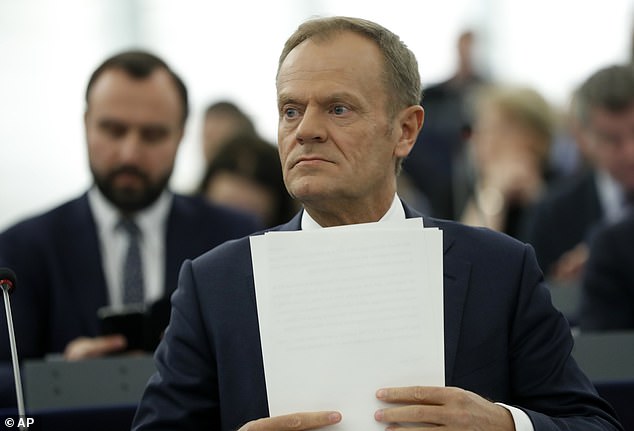 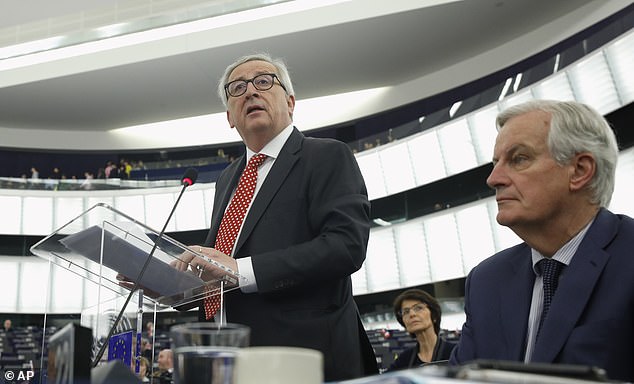 Mr Tusk told MEPs that any returned by Britain would be ‘full members of the Parliament, with full rights and obligations’.

He said: ‘I know that some have expressed fear that the UK might want to disrupt the EU’s functioning during this time but the EU 27 didn’t give in to such fear and scaremongering.

‘In fact, since the very beginning of the Brexit process the UK has been a constructive and responsible EU member state and so we have no reason to believe that this should change.’

It came after a top German politician warned Britain to get its EU departure sorted by the new October 31 deadline, saying ‘You cannot drag out Brexit for a decade’.

Heiko Maas, Angela Merkel’s foreign minister said that the UK had six months to sort itself out politically, hinting that a fresh extension to Article 50 was not a formality.

‘They will have to decide what they want by October,’ .

Mr Tusk called for the ‘dream’ that Britain might give up on leaving the European Union not to be dismissed and urged politicians not to let exhaustion with Brexit negotiations make for a hasty exit.

Giving an account of last week’s summit to the European Parliament in Strasbourg, European Council President Tusk said he was responding to a statement by one national leader who had warned ‘dreamers’ not to think ‘Brexit could be reversed’. 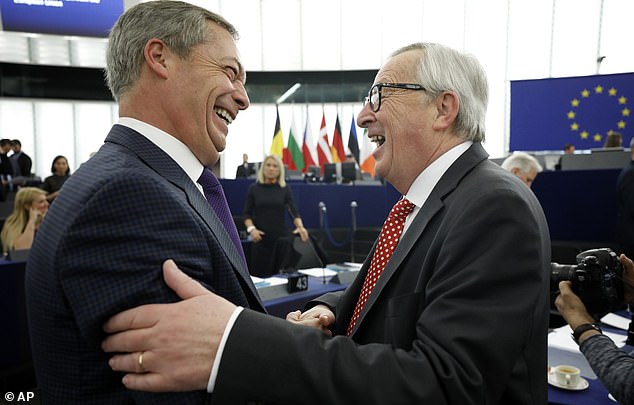 Nigel Farage, who has been an MEP for two decades, greeted Mr Juncker today, days after setting up a new Brexit Party to stand in May’s elections on a platform of leaving 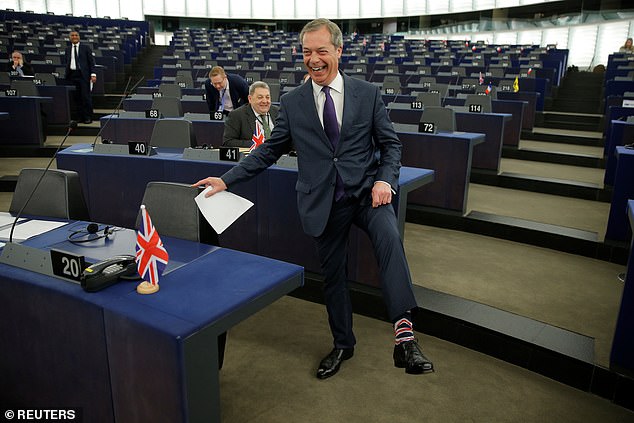 Nigel farage shows off socks in British colours as he appears at the European Parliament in Brussels.

‘At this rather difficult moment in our history, we need dreamers and dreams. We cannot give in to fatalism.

‘At least I will not stop dreaming about a better and united Europe,’ said Tusk, long a vocal proponent of Britain having a chance to stay.

It was not immediately clear which leader he was referring to, but French President Emmanuel Macron stood out at the summit for pushing for Britain to be given only a few weeks more to decide whether to leave on negotiated terms or without them. The summit compromised by giving Britain another six months.

Tusk said: ‘I know that, on both sides of the Channel, everyone, including myself, is exhausted with Brexit, which is completely understandable. However, this is not an excuse to say: “let’s get it over with”, just because we’re tired.’

Speaking after Mr Tusk he said it was  up to Britain when it chooses to exit the European Union and it was not his working assumption that Brexit could be reversed or extended beyond October.

He said the EU was ‘ready’ for a no-deal Brexit but that the bloc had ‘nothing to gain’ from the ‘disruption’ it would cause the UK.

He said that like the UK the EU was now on a break from Brexit after the new longer deadline was passed last week.

Earlier Theresa May had been urged to use the delay to Brexit to prepare for the next stage of negotiations with the EU and avoid repeating the blunders made during the divorce process.

Talks on a future trade deal with Brussels will be ‘more complicated’ than the negotiations on the Withdrawal Agreement, an Institute for Government (IfG) report said.

In a highly critical assessment of the Government’s handling of the Brexit process so far, the think tank’s analysis blamed Mrs May for creating the ‘unsustainable’ split in responsibilities between Number 10 and the Department for Exiting the European Union (Dexeu), with the ‘secretive’ approach adopted by the Prime Minister and her closest aides fuelling division.

Negotiations on the first phase of Brexit were also ‘bedevilled by the difficulty of getting Cabinet agreement’ on the kind of relationship the UK wants with the EU.

Politicians, particularly on the Tory backbenches, ‘did not trust the UK’s official negotiators’ led by Olly Robbins.

‘Ministers, from the Prime Minister down, were unclear about the instructions they gave to officials,’ the report said, meaning that critics could blame the civil servants, undermining their work.

‘Those hasty decisions created completely foreseeable problems for the exit negotiations, compounded by the inability of the Cabinet to reach an agreed position on the key future economic relationship.

‘Whoever is prime minister for the second phase of the negotiations needs to ensure that they avoid similar mistakes next time round.’