His heart racing and his mind filling with fear, Joseph Moore hurried towards the Eilean Mor lighthouse, desperately yelling out the names of his fellow lighthouse keepers he’d expected to greet him.

But the only reply came from the gulls and petrels shrieking in the skies above the tiny, lonely island in the Outer Hebrides.

It was late afternoon on December 26, 1900. After celebrating Boxing Day on the Isle of Lewis, some 20 miles away, assistant keeper Moore had boarded the steamer Hesperus, a supply vessel that was taking him to Eilean Mor for his next six-week stint of duty. 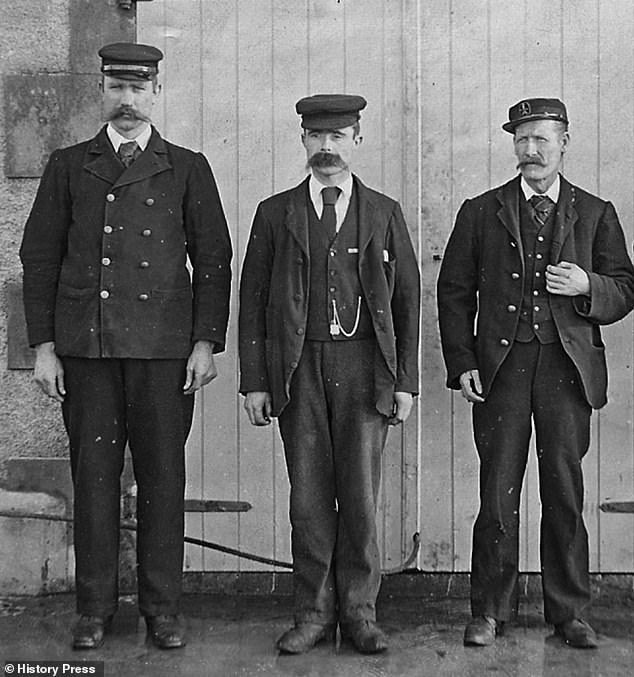 The three missing men – (from left to right) Thomas Marshall, Donald MacArthur and James Ducat – pose outside Flannan Lighthouse in the Outer Hebrides one week before they vanished in mysterious circumstances in 1900

Married with two young children, 28-year-old Moore had been delighted that his last period of shore leave had coincided with Christmas.

But the fortuitous timing went beyond that — it probably saved his life. A chilling new film, The Vanishing, starring Gerard Butler, is based on the true story of how the three men Moore had waved goodbye to on Eilean Mor only two weeks before disappeared without a trace.

They had no boat, and no bodies were ever found, leading some to suggest that supernatural forces had been at work in the Flannan Isles, the group of seven islands to which Eilean Mor, barely 500ft across, belongs.

The Flannans were much feared by sailors — and with good cause. Numerous ships had foundered on their unforgiving coastlines, which are often hidden by dense fog. In the aftermath, the bodies and bones of victims had littered the shores. 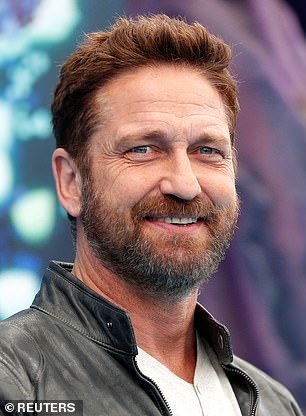 For centuries the only signs of human habitation were the ruins of a chapel devoted to St Flann, an Irish monk who lived there during the 7th century. In death, he was said to regard Eilean Mor as his own — a sinister, watchful presence that terrified shepherds who ferried their sheep over to graze there, but who never stayed the night.

When a lighthouse was built in December 1899, to guide ships through one of the wildest reaches of the North Atlantic, locals warned that the intrusion would unleash St Flann’s wrath.

So did these misgivings come true almost exactly a year later, when the lighthouse keepers went missing?

This maritime mystery is as intriguing as that of the Marie Celeste, and to this day goes unanswered. The first sign that something was amiss came when the SS Archtor, a cargo ship en route from Philadelphia, passed Eilean Mor at around midnight on December 15. The Captain noticed that the lighthouse was dark.

He reported this upon docking in Leith, near Edinburgh, three days later. But for some reason the information did not reach the Northern Lighthouse Board.

And so when Joseph Moore left Lewis to join his fellow keepers, he was expecting a hearty welcome and more Yuletide celebrations.

But, as the Hesperus approached Eilean Mor, he felt the first inklings of fear. The winter afternoon was dark but no light beamed forth. Something was up.

Even when the Captain sounded the steamer’s horn and sent up a distress flare to attract attention, there was no response from anyone in the lighthouse. There seemed little choice but to send Moore to investigate. He clambered onto the landing stage and raced up the long wooden staircase that zig-zagged up the cliff face.

He saw the gate to the lighthouse enclosure was closed, as was the door to the tower. Then he looked up and saw three giant black birds perched above. They seemed to be monitoring his every move. 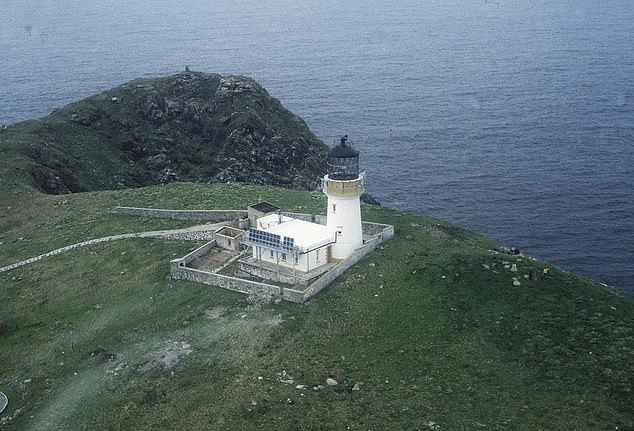 The remote Eilean Mor lighthouse on the Flannan Isles in the Outer Hebrides. Legend has it that when it was built in December 1899, to guide ships through one of the wildest reaches of the North Atlantic, locals warned that the intrusion would unleash St Flann’s wrath

Moore made his way into the silent lighthouse, heading first to the kitchen, which was normally the cosy hub of lighthouse life. Yet the room had a deathly chill about it. The clock had stopped and the ashes in the grate were cold. A poem about the incident, written in 1912 by Wilfrid Wilson Gibson, describes an untouched meal on the table — there was cold meat, pickles and potatoes. A kitchen chair lay on its side, and the only sign of life was the keepers’ canary, half-starving on its perch.

It is not known if this was accurate, but what Moore saw clearly terrified him. Tearing back down to the landing stage, he pleaded with the crew from the Hesperus to help him search the tiny island. They found nothing.

Reluctantly, Moore agreed to stay to tend the light. It’s not difficult to imagine how scary the nights that followed were for him, alone in the light room, listening to the wind howling all around as the revolving lamp cast shadows. The Northern Lighthouse Board’s superintendent, Robert Muirhead, arrived three days later to investigate and described Moore as being in a state of ‘nervousness’.

He may have heard voices on the wind, calling out the names of the three missing men — a claim later made by others.

While keeper Thomas Marshall was single, the other two — James Ducat and Donald MacArthur — were married, with six children between them. The task of breaking the news to their widows had fallen to Muirhead, who knew their families well. 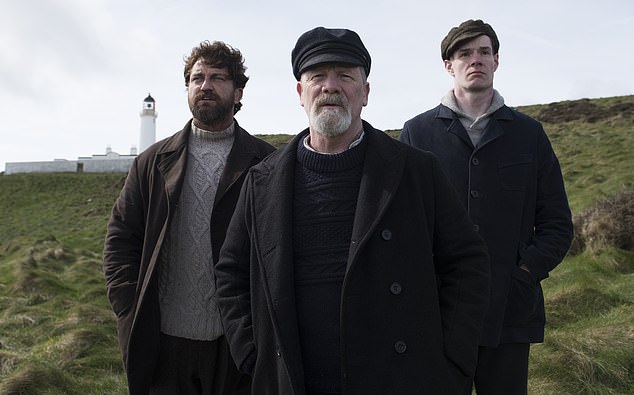 Actors Gerard Butler, Peter Mullan and Connor Swindells star as the three men who mysteriously vanished from the Eilean Mor lighthouse in the Flannan Isles in 1900

He had last seen the keepers on December 7, when he travelled out for a routine check on his employees. ‘I have the melancholy recollection that I was the last person to shake hands with them and bid them adieu,’ he wrote.

The last record left by the men was on the morning of December 15, chalked on the slate where they noted down weather conditions and their daily activities, which included trimming the lighthouse lamp, filling its oil fountains and cleaning the giant lenses.

Nothing amiss was mentioned, but the fact that the lighthouse had not been operational that evening strongly implied that this was the day they disappeared.

As to the cause, Muirhead noted that the landing platform on the western side of the island had suffered severe storm damage, with twisted iron railings and a block of stone, estimated to weigh a ton, displaced onto the path. He concluded that the men must have gone to repair the damage and been swept away by a wave.

The problem with this theory is that, while the boots, capes and oilskins belonging to Ducat and Marshall were missing, Donald MacArthur’s were still inside. It seems unlikely that, in the freezing weather, he would have left the lighthouse wearing only shirt-sleeves and rope-soled sandals.

It was possible, of course, that Ducat and Marshall had run into trouble at the landing stage and that, on hearing their cries for help, MacArthur had rushed down to their assistance before being washed away himself.

But if he had left the lighthouse in a panic, why had he wasted precious time on closing both the entrance door and the gate to the yard? And why were none of their bodies ever washed up?

None of it made sense and, over the coming years, speculation mounted about the keepers’ fate. Among the more fanciful explanations was a claim by locals that the keepers had been changed into those three giant birds Moore had seen upon landing.

Others said they had been kidnapped by a foreign power after seeing something they shouldn’t have — perhaps a secret warship? Or did one of them murder the other two — MacArthur was said to have a volatile temper —and throw himself off the cliffs in an act of remorse?

Or was American author Vincent Hayes Gaddis — who specialised in sensational stories of the paranormal —correct in suggesting that in the days before the trio vanished they had been tormented by a tempest so violent that it must have been caused by a supernatural dark force?

In a book written in 1965, Gaddis quoted entries supposedly written in the lighthouse log by Thomas Marshall. ‘Never seen such a storm,’ he is recorded as writing on December 12. ‘Ducat quiet. MacArthur crying.’ He added the next day: ‘Storm continued through night. Grey daylight. Me, Ducat and MacArthur prayed.’

It has since been suggested that Gaddis might have fabricated these entries. But we simply don’t know, as the original logbook went missing after the incident.

That in itself might be regarded as suspicious. Was this document of official record really mislaid, or was it deliberately destroyed?

If the distressing entries quoted by Gaddis were authentic, it certainly wouldn’t have helped the authorities to recruit other keepers to Eilean Mor, replacing not just the three men who disappeared but also Moore. He lasted just three more months before demanding a transfer from the post.

The island is now home to an automated lighthouse that continues to illuminate a safe passage for seafarers. But, to this day, it has failed to shine a light on the fate of its keepers, whose existence was simply erased on that fateful day over a century ago.

The Vanishing is now out in UK cinemas.