At least 16 people have been killed and 20 injured by ‘live fire’ during protests in Khartoum, Sudan, a police spokesman confirmed.

General Hashim Abdelrahim said ’16 people died and 20 were wounded by live ammunition’ as the capital saw hundreds of thousands gather over the last two days.

General Abdelrahim added that government buildings and private property had also been attacked.

It comes after Sudan’s defence minister announced he was stepping down as transitional leader – a day after ousting the country’s autocratic president.

Mr Ibn Ouf said: ‘I, the head of the military council, announce I am giving up the post,’ adding he took the decision to preserve the unity of the armed forces. 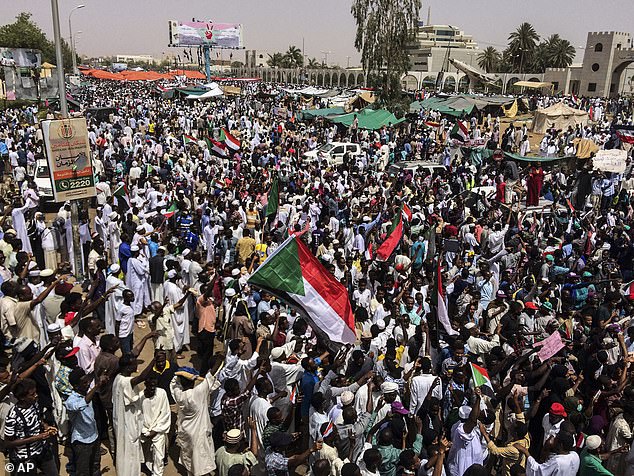 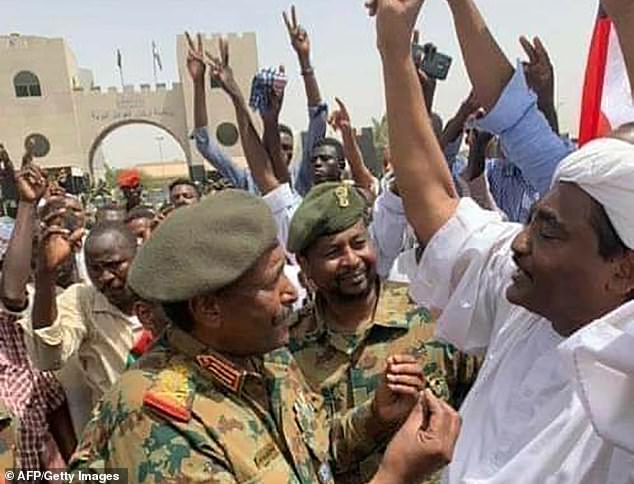 Lieutenant General Abdel Fattah al-Burhan, the new chief of the military council takes over in Sudan following the ouster of president Omar al-Bashir. He is pictured speaking with demonstrators outside the army headquarters in Khartoum 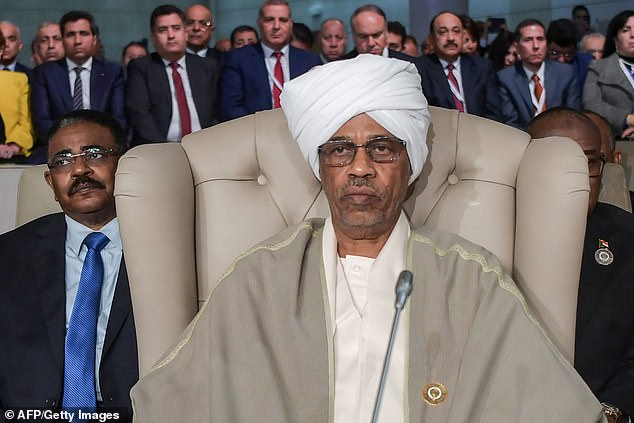 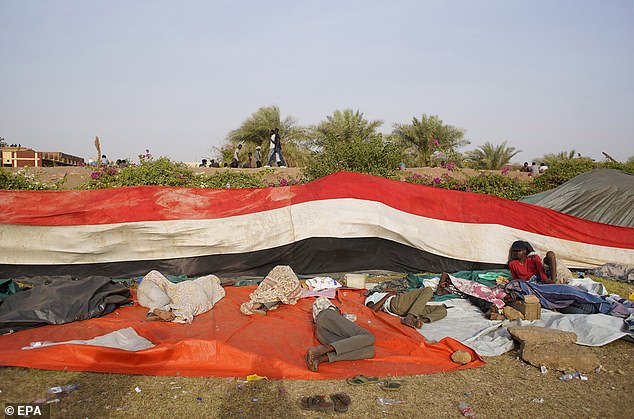 Tens of thousands of Sudanese protesters have been rallying in front of the military headquarters in Khartoum against the military takeover of power after the ousting of long-time ruler Omar al-Bashir on Thursday.

The Sudanese military has rejected calls to hand over al-Bashir to the International Criminal Court where he faces genocide charges for his deadly campaign in the western Darfur region and said he would be put on trial at home.

The developments point to the sensitivity of the case of the Darfur conflict for the military council that has taken power after removing and arresting al-Bashir amid mounting protests against his 30-year rule.

Mr Ibn Ouf was head of military intelligence during the brutal campaign to suppress the Darfur insurgency in the 2000s.

The United States has imposed sanctions on him since 2007, saying he armed and directed pro-government militias known as the Janjaweed, accused of widespread atrocities against civilians and rapes during the conflict.

Earlier on Friday, another top general Omar Zein Abedeen said that al-Bashir would not be extradited to the International Criminal Court based in The Hague, saying doing so would be ‘an ugly mark on Sudan’. 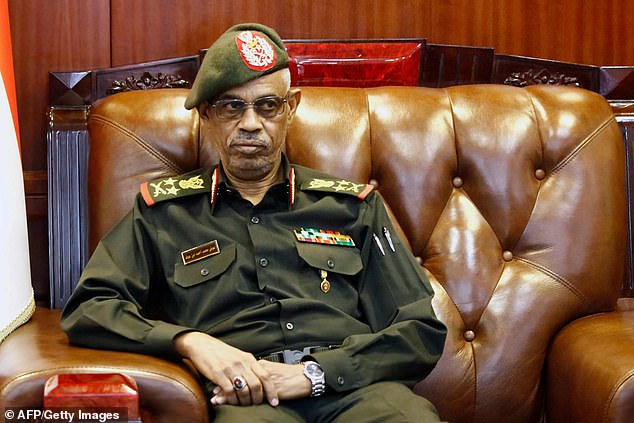 However, defence minister Ahmed Awad Ibn Ouf was forced to step down as transitional leader of the country after less than 24 hours in charge

‘Even rebels carrying weapons, we don’t extradite them,’ he told reporters at a news conference in Khartoum.

Mr Zein Abedeen said Sudanese courts would hold al-Bashir ‘accountable,’ but did not specify what charges he could be prosecuted on. In ousting the president, the military denounced him and his government for corruption, maladministration and ‘lack of justice’.

Meanwhile, Mr Zein Abedeen sought to reassure protesters who, while celebrating al-Bashir’s removal, oppose the military’s seizure of power in his wake.

After ousting the president, the military announced it would rule the country for two years through a transitional council. It also suspended the constitution, dissolved the government, declared a three-month state of emergency and imposed a night-time curfew. 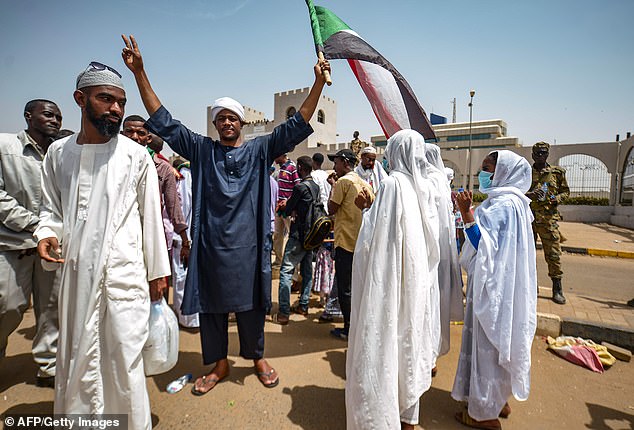 Protest organisers have vowed not to end their street action until a civilian transitional council is formed, saying rule by military commanders who for years were al-Bashir loyalists is just an extension of his regime.

The curfew and state of emergency have raised fears the military could eventually disperse the sit-in by force. But at least initially, it appears to be trying to persuade protest organisers to end the campaign.

Speaking at a news conference aired live on state TV and flanked by other uniformed officers, Mr Zein Abedeen – who is tasked with leading dialogue with Sudan’s political factions – insisted the army has no ambition to hold the reins of power for long.

‘If within a month, Sudan became able to run itself without chaos, we are ready to leave even after a month. The maximum is two years,’ he said. 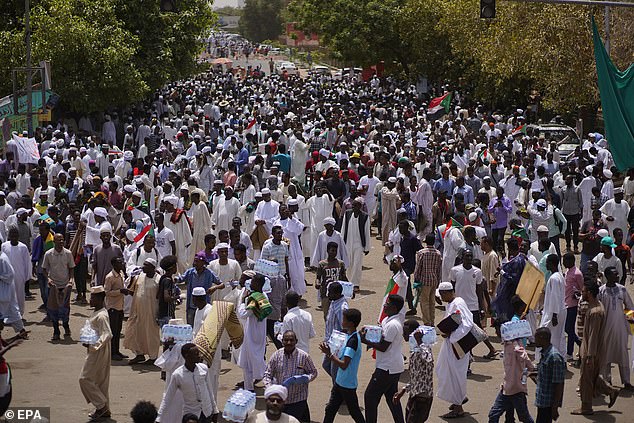 Doctor, 50, died from sepsis after a lack of medical insurance on US holiday
Talks aimed at stopping London Heathrow strike resume today as airports cancel 177 flights
Revealed! Worst constructions fails from around the globe
Brittany Murphy's half-brother says she was murdered
Hilarious moment police rider strokes her horse while the animal returns the favour
The Queen is joined by Princess Anne for church service - after cancelling appearance over cold
'Lockdown until 2021 and talk of exit strategy banned' as Boris Johnson sides with 'doves'
Naya Rivera hinted at Eminem's 97' Bonnie & Clyde song about a mother sank to bottom of lake