Delta is to reduce the amount of space that passengers in coach and business can recline their seats, it was reported.

And officials denied they are trying to fit additional seats on to the aircraft with the change. They claim  the move will reduce disruption to other passengers, allow them to pass by for toilet breaks and to use laptops freely. 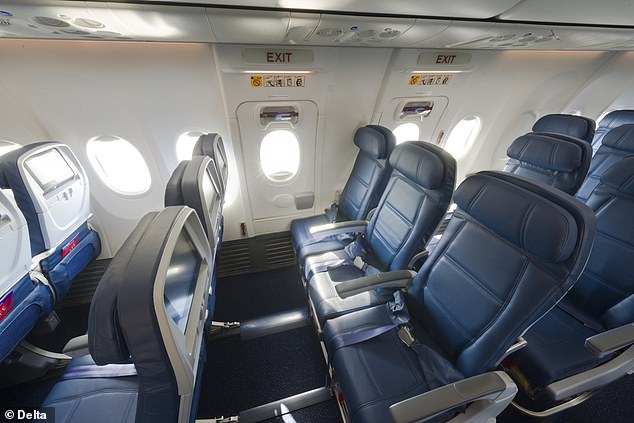 Delta is to reduce the amount of space that passengers in coach and business can recline their seats. Main Cabin seats inside a Boeing 737-900ER (739), which are smiliar seats on Air

Delta spokeswoman Savannah Huddleston told : ‘As part of Delta’s continued efforts to make the in-flight experience more enjoyable, Delta is testing a small change to its A320 aircraft — adjusting the recline throughout to make multitasking easier.’

‘Delta has no plans to add seats or reduce space between rows with this test. It’s all about protecting customers’ personal space and minimizing disruptions to multitasking in-flight.’

Delta typically flies the A320 on short- to medium-haul routes averaging one to two hours, which are frequented by business travelers, according to Huddleston.

It will take Delta about two months to get the entire A320 fleet retrofitted. Aviation security consultant Jeff Price told CNN Travel: ‘Being a frequent business flier, my productivity just dies when the person in front of me drops their seat into my lap.’

‘With the narrow room the airlines give you for your legs, I can’t even sit in the normal seats with my legs facing forward.

‘I have to turn them sideways, and it’s worse when the seat drops back.’

The retrofit is a test of how to preserve passengers’ personal space, according to 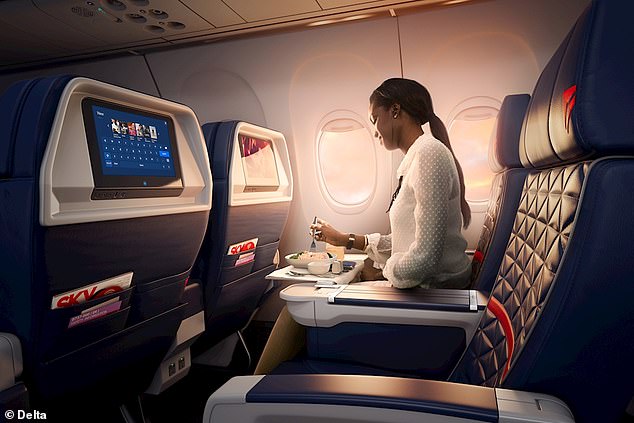 Delta deny they are trying to fit additional seats on to the aircraft or will save money. They claim the move will ‘minimize disruptions to multi-tasking passengers’ 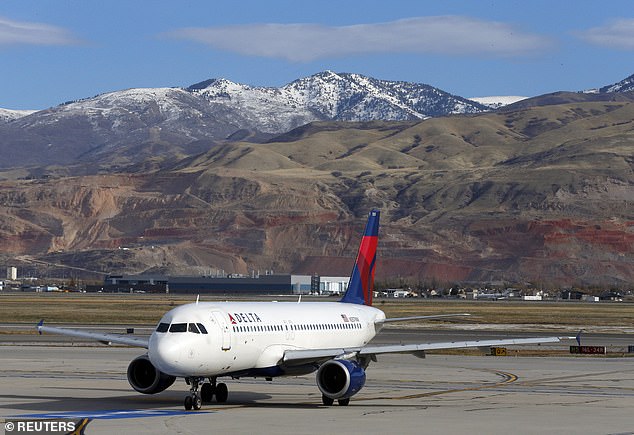 ‘There’s long been a debate among frequent travelers if flyers should have a right to recline or not,’ explained Scott Mayerowitz, executive editorial director of The Points Guy.

It is understood  Delta will rely on passenger feedback, The Points Guy reports, to determine whether the airline will expand the change to the rest of its domestic airplane fleet or go back to the original four inches of coach recline.

There are no plans to change the coach recline on international flights, according to The Points Guy.

Mayerowitz explained that less leg space could come as a welcome development for some passengers.

He added: ‘But, if you take Delta at its word, this might make for a more comfortable flight for some. Anybody who ever tried to work on a plane only to have a laptop screen slammed by the seat in front will rejoice at the change.’

Orlando Lyft driver accused of launching intercourse assault on certainly one of his riders as she w...
Pope tells 82,00Zero followers to repeat ‘sorry, please and thanks’ after assembly Irish abuse victi...
Questions surrounding bail supervisor who granted Saudi permission to study same day he fled the US
Semi truck is sent crashing onto its side on a Texas highway as 80mph gales rip through the state
Christchurch's Al Noor mosque carpark remains full of victims cars
Suspicious package prompts evacuation of Bernie Sanders' Burlington office
Australian woman transforms her stairs for $30 using contact from Bunnings
Daters looking for love rate potential matches as MORE attractive when snapped with flashy car