Julian Assange has been arrested by British police today after Ecuador withdrew his political asylum seven years after he was given refuge.

The Wikileaks founder was dragged out of the Ecuadorian Embassy in handcuffs by a large group of Metropolian Police officers as stunned supporters and protesters watched on in central London.

He is currently in police custody and is set to appear at Westminster Magistrates’ Court ‘as soon as possible’.

Moreno added that he had asked Britain to guarantee that Assange would not be extradited to a country where he could face torture or the death penalty.

Moments after the arrest, WikiLeaks said Ecuador had acted illegally in terminating Assange’s political asylum ‘in violation of international law’.

Assange, 47, has been living at the embassy in London’s Knightsbridge after seeking refuge there to avoid extradition to Sweden.

He was held on a warrant issued by Westminster Magistrates’ Court on 29 June 2012 when he failed to surrender to the court. 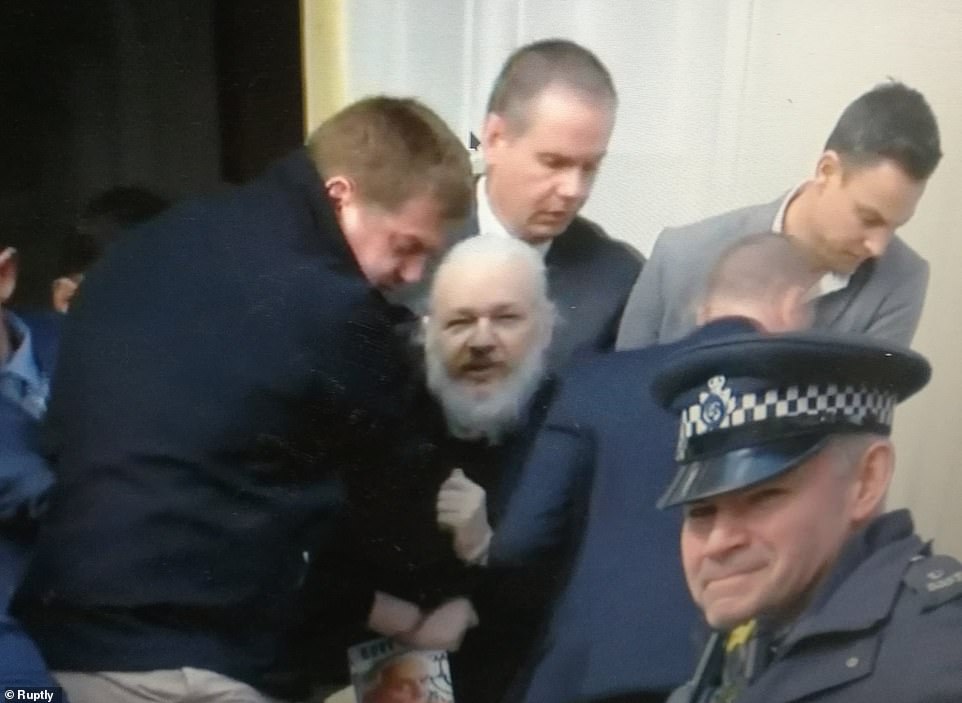 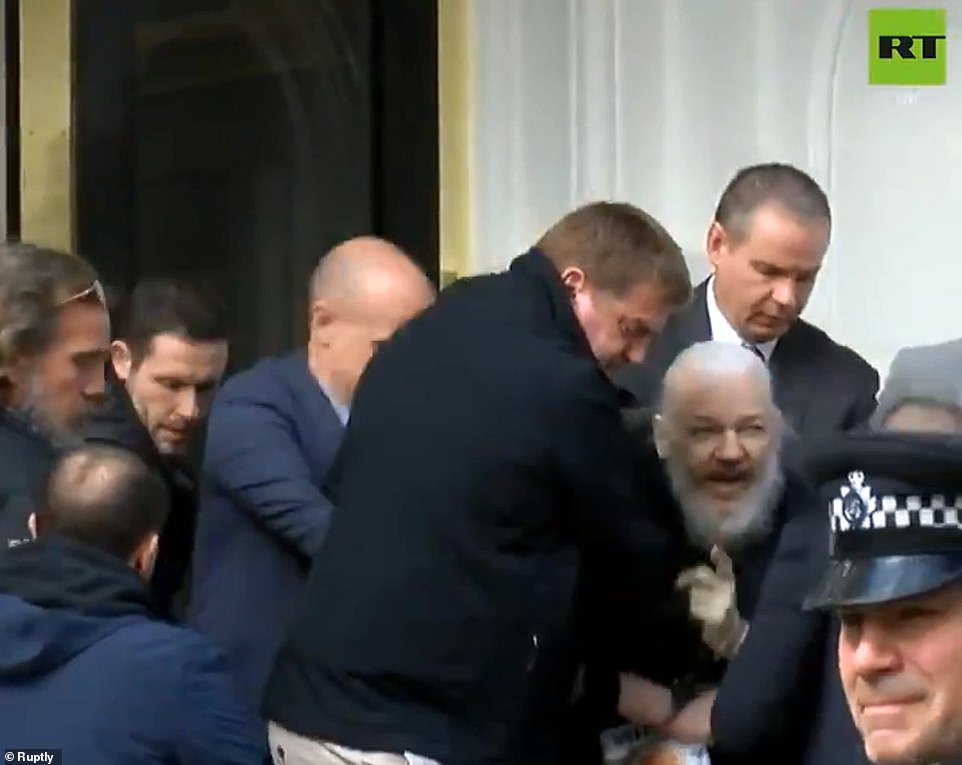 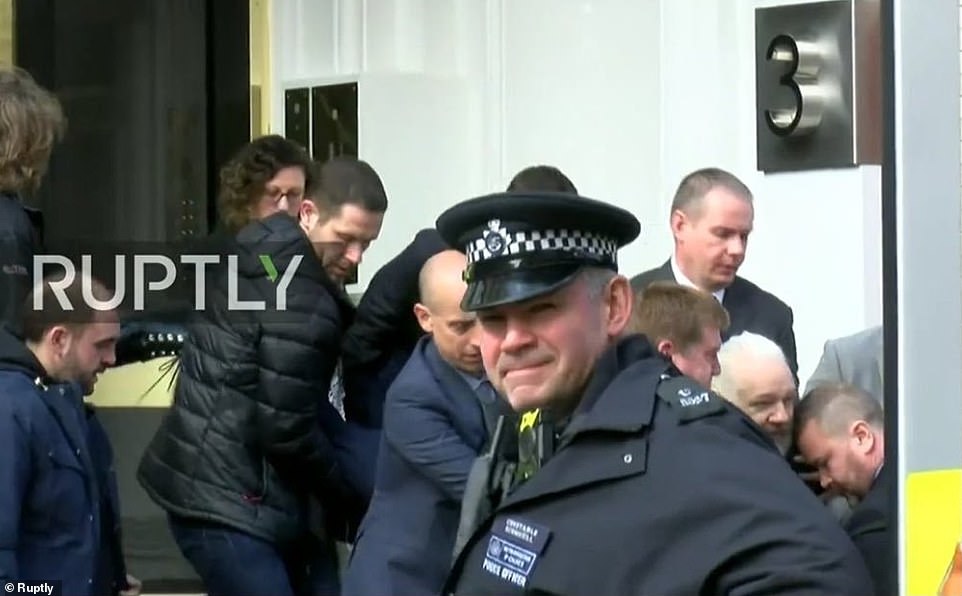 The news of his arrest was confirmed by Home Secretary Sajid Javid on Twitter, who said that ‘no on was above the law’.

Writing to Twitter, he said: ‘Nearly 7yrs after entering the Ecuadorean Embassy, I can confirm Julian Assange is now in police custody and rightly facing justice in the UK.

‘I would like to thank Ecuador for its cooperation & for its professionalism. No one is above the law.’

His arrest comes a day after Wikileaks accused the Ecuadorean Government of an ‘extensive spying operation’ against Assange.

WikiLeaks claims meetings with lawyers and a doctor inside the embassy over the past year were secretly filmed.

Assange had refused to leave the embassy, claiming he would be extradited to the United States for questioning over the activities of WikiLeaks if he did so.

In a statement, Scotland Yard said: ‘Julian Assange, 47, has today, Thursday 11 April, been arrested by officers from the Metropolitan Police Service (MPS) at the Embassy of Ecuador, Hans Crescent, SW1 on a warrant issued by Westminster Magistrates’ Court on 29 June 2012, for failing to surrender to the court.

‘He has been taken into custody at a central London police station where he will remain, before being presented before Westminster Magistrates’ Court as soon as is possible.

‘The MPS had a duty to execute the warrant, on behalf of Westminster Magistrates’ Court, and was invited into the embassy by the Ambassador, following the Ecuadorian government’s withdrawal of asylum.’

‘He was arrested by the British police inside the Ecuadorian embassy minutes ago.’

Ecuador’s president Lenin Moreno said on Twitter: ‘In a sovereign decision Ecuador withdrew the asylum status to Julian Assange after his repeated violations to international conventions and daily-life protocols.’ 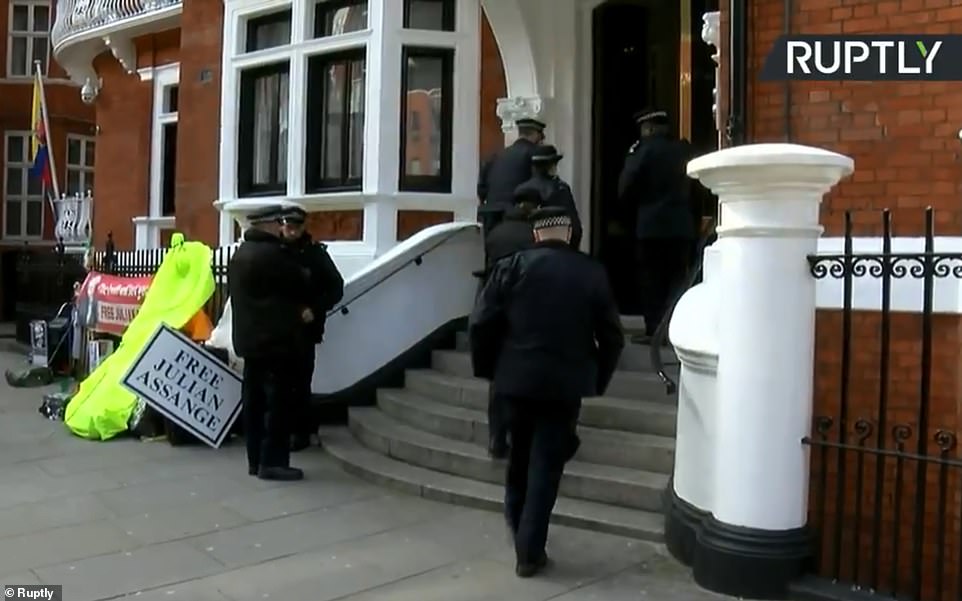 Father, 92, who shot his son, 51, as he slept was provoked by 'extreme psychological abuse'
Body language expert analyses new Prince Charles birthday pictures
Meet the China's 'kung fu kid': Boy, 3, gets up at 5am every day to train to become a Shaolin master
Florida police sheriff suspended over Parkland school shooting response
Multiple Houston police officers are shot during an 'encounter' with a suspect
Elementary school art teacher goes viral with dress decorated by her students
Mother tells how she bravely ran away from incestuous polygamous cult at 17
We're proof you can eat to beat illness: These five people transformed their health