is slamming Jeff Bezos as a copycat after the Amazon CEO announced his rocket startup’s plans to launch 3,000 internet satellites into space.

On Tuesday it was reported Blue Origin is launching Project Kuiper to send a constellation of about 3,000 satellites to orbit at three different altitudes to provide internet access under-served areas across the globe.

The initiative, that would reach about 95 percent of the globe, was revealed in federal filings. 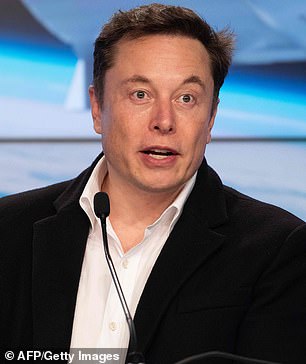 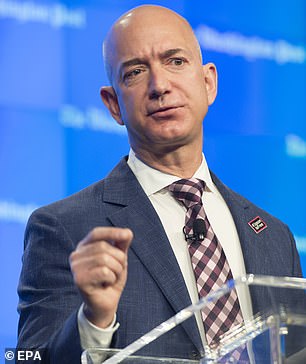 Elon Musk slammed Jeff Bezos as a copy cat on Twitter on Tuesday evening after his plans to launch 3,000 satellites into space to stream internet to undeserved areas of the globe was revealed, a project similar to what Musk launched last year at SpaceX 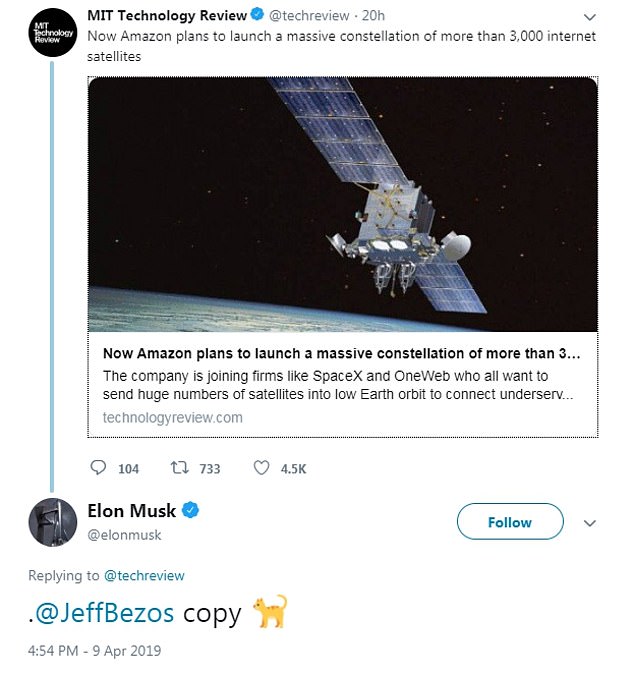 Musk directed the snubbed tweet to Bezos after he learned of Project Kuiper. Over a year ago Musk’s SpaceX launched two test satellites into orbit for its Starlink constellation, which seeks to provide global broadband to the ‘least served’

When the MIT Technology Review reported the story, Musk replied with tweet directed at Bezos himself with the word ‘copy’ and a cat emoji.

Musk’s own private rocket company SpaceX already launched two prototype satellites into orbit after it received U.S. approval for its own plan in February 2018, according to

The project, called Starlink, is designed to create a network of roughly 12,000 internet-beaming satellites.

Musk said the intention of the satellite network was to provide global broadband to ‘serve [the] least served’.

According to CNBC, Bezos had hired SpaceX’s former vice president of satellites Rajeev Badyal, who led the Starlink project to spearhead his Blue Origin’s own project.

Badyal was fired by Musk who became inpatient with the space of development. 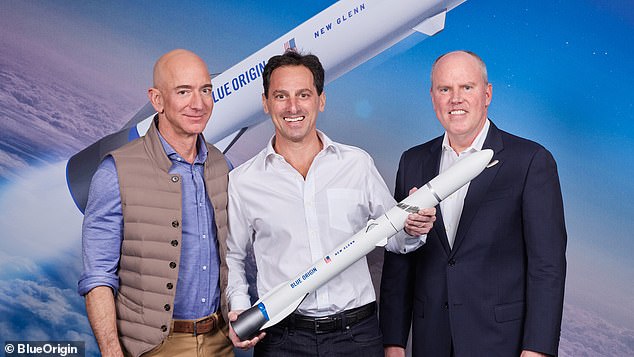 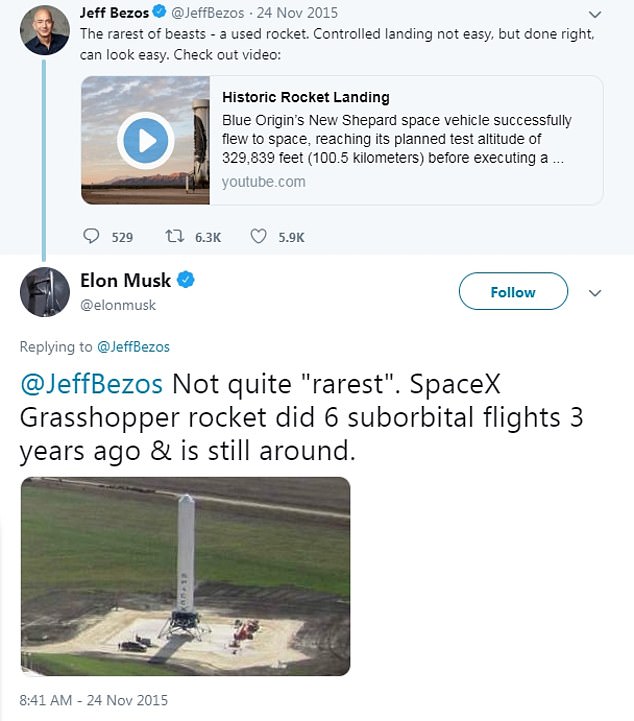 Ongoing beef: In 2015 when Bezos proudly posted a video bragging about Blue Origin’s successful rocket launch in 2015, Musk replied with a video of his company’s Grasshopper rocket who achieved the same feat three years prior

But this isn’t the first time that Musk has hit at Bezos in his venture into space.

In 2015 when Bezos proudly posted a video bragging about Blue Origin’s successful rocket launch in 2015, Musk replied with a video of his company’s Grasshopper rocket who achieved the same feat three years prior.

Bezos wrote his rocket was ‘the rarest of beasts’.

Musk replied saying: ‘Not quite “rarest”. SpaceX Grasshopper rocket did 6 suborbital flights three years ago & is still around.’

‘This is a long-term project that envisions serving tens of millions of people who lack basic access to broadband internet,’ an Amazon spokesperson said on the plan.

It’s not clear when these satellites will be able to provide internet as they need to obtain approval from the U.S. Federal Communications Commission first.

Musk and Bezos aren’t alone in their pursuit of building an internet satellite fleet, Facebook is reportedly pursuing similar plans.

Little Combine's Jade Thirlwall reveals off her scorching determine in sequined bikini
'Drunk' passenger claims she works for easyJet throughout foul-mouthed rant at Ryanair steward
Kyly Clarke reveals she teaches two-year-old daughter she can't have anything she wants
Police confirm body of woman found in Humber Estuary yesterday is missing student Libby Squire
Good Samaritans feel ridiculed by homeless beggar who left £400 caravan wrecked
Apple confirms it's killing iTunes as it unveils latest updates iPhone, Apple Watch and TV at WWDC
I had to pass a fitness test before I had major surgery
Samantha Markle lashes out over Meghan and Prince Harry's announcement