Israeli President Benjamin Netanyahu was celebrating victory following the vote in the Israeli Election on Tuesday night after polls showed he has lead over rival Benny Gantz.

The votes are due in later on Wednesday and Netanyahu is hoping to secure a record fifth term in power despite corruption allegations hanging over him.

Exit polls were giving conflicting results throughout the night. 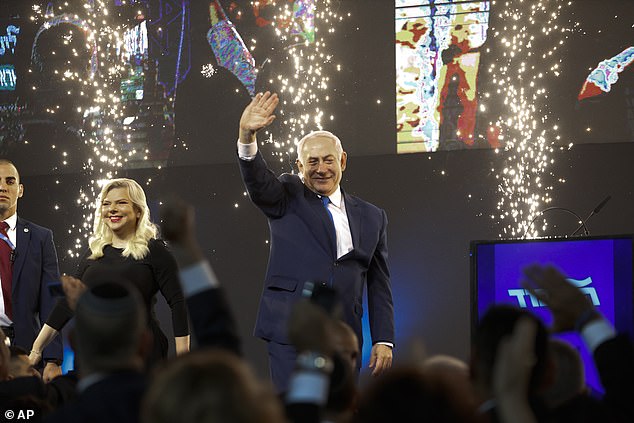 Israeli President Benjamin Netanyahu was celebrating victory following the vote in the Israeli Election on Tuesday night after polls showed he has lead over rival Benny Gantz. Netanyahu and his wife Sara are pictured waving to his supporters after polls for Israel’s general elections closed

The buoyant leader said it had been ‘a night of tremendous victory’ as he delivered a speech to supporters at the Likud election headquarters.

He said the party had achieved ‘a stupendous achievement’ despite, what he called ‘a hostile media under impossible conditions’.

The president said he had already started talks with the leaders of right-wing parties to form a coalition.

He also claimed that nearly all parties promised to support him as a Israel’s prime minister in the upcoming term.

He said: ‘Thank you to the thousands of activists and over a million voters. These elections have a clear winner and a clear loser. Netanyahu promised 40 seats and lost. The President can see the picture and should call on the winner to form the next government. There is no other option!’

But earlier Mr Gantz also claimed victory in the election and said: ‘We won! The Israeli public has had their say!’

Earlier the election had been branded ‘too close to call’ with early exit polls recording conflicting results.

According to an exit poll conducted by Israel’s Channel 12 before the votes were in, Netanyahu’s Likud party currently has 33 seats while Mr Gantz’s Blue and White party has inched above him with 37 seats. 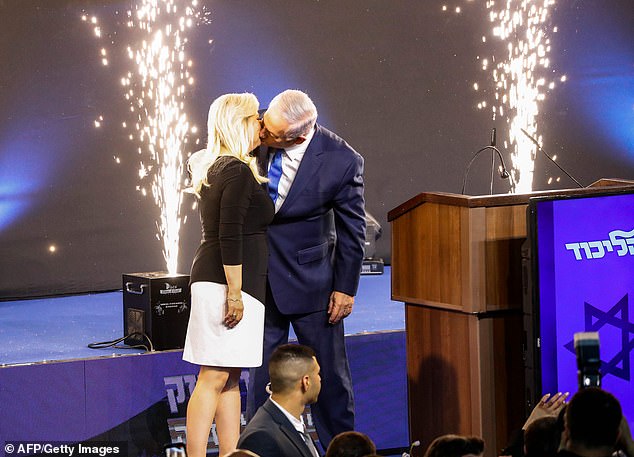 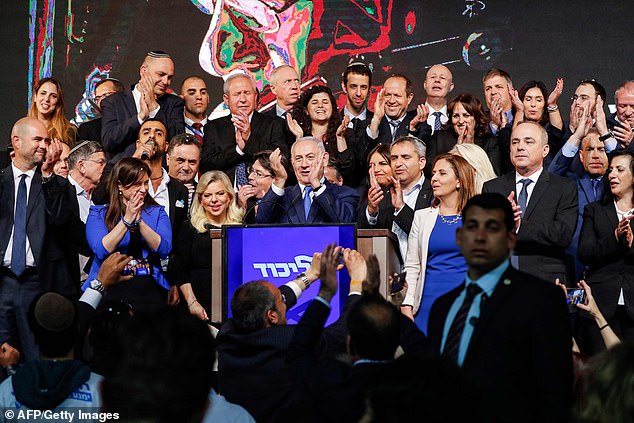 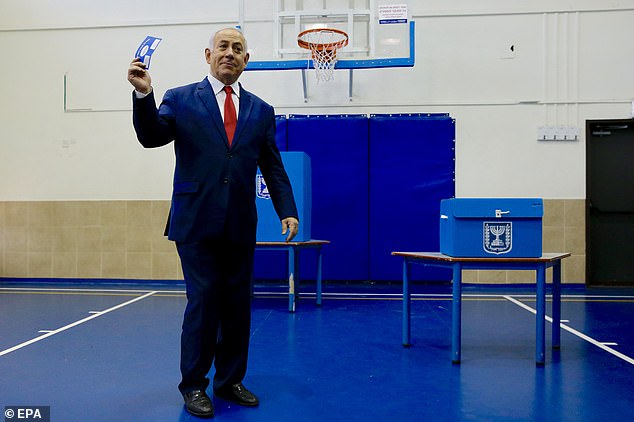 Channels 12 and 13 are projecting Likud will claim 35 seats,  compared to 34 for Gantz’s party.

Both expressed also their belief that victory was theirs in statements last night.

A third exit poll predicted vote would be a deadlock with centre-left parties allied to Mr Gantz.

Casting his vote at a polling station in Jerusalem, Netanyahu urged Israelis to ‘choose well’, adding: ‘This is a sacred act, the essence of democracy, and we should be thankful for that.’ 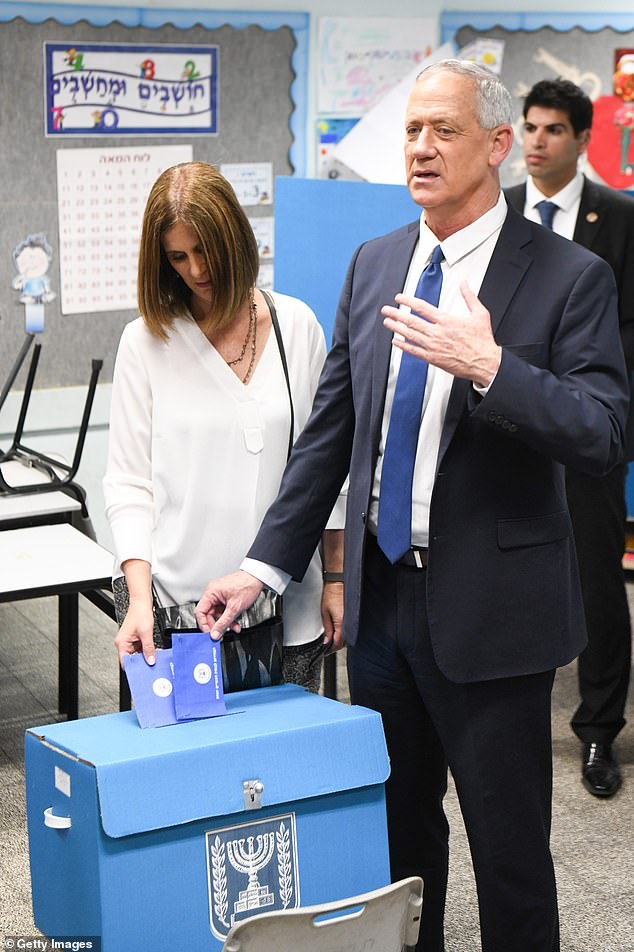 Rival Benny Gantz (pictured alongside wife Revital) has overtaken Mr Netanyahu in the polls, but the incumbent has a better chance of forming a coalition – giving him the advantage

He added: ‘You need to choose well, but I can’t tell you for whom. Or I can, but I’m not going to. God willing, Israel will win.’

Gantz, a retired military chief, voted in his hometown of Rosh Haayin in central Israel alongside his wife, Revital, calling on Israelis to vote and ‘take responsibility’ for their democracy.

‘Go to vote. Choose whoever you believe in. Respect each other and let us all wake up for a new dawn, a new history,’ he said.

The election has emerged as a referendum on Netanyahu and his 13 years overall in power, with the existential questions facing Israel rarely being discussed.

The 69-year-old prime minister has been the dominant force in Israeli politics for the past two decades and its face to the world.

But his various corruption scandals have created some voter fatigue, and in recent days he’s vowed to annex Jewish West Bank settlements if re-elected – a prospect that could doom the already slim hopes of establishing a Palestinian state alongside Israel, which Netanyahu has previously wavered on.

‘It’s about time for a change,’ said Barry Rifkin, a Jerusalem resident. 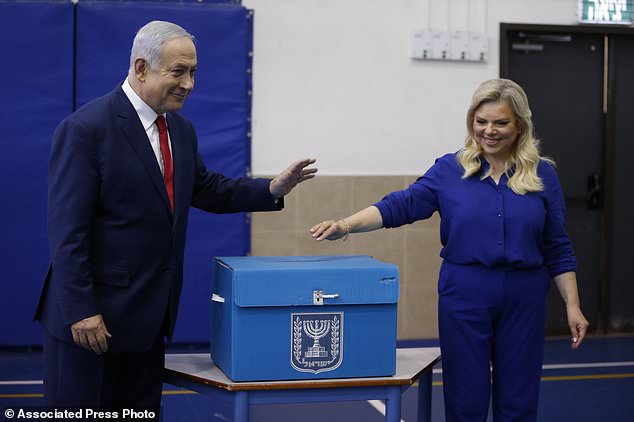 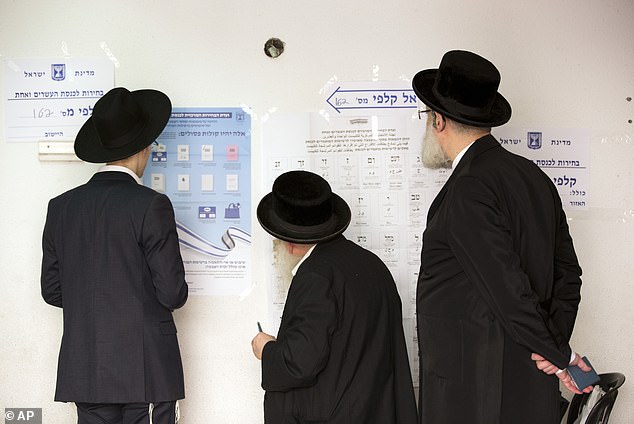 6.4million people were eligible to cast votes and election day is a public holiday in Israel 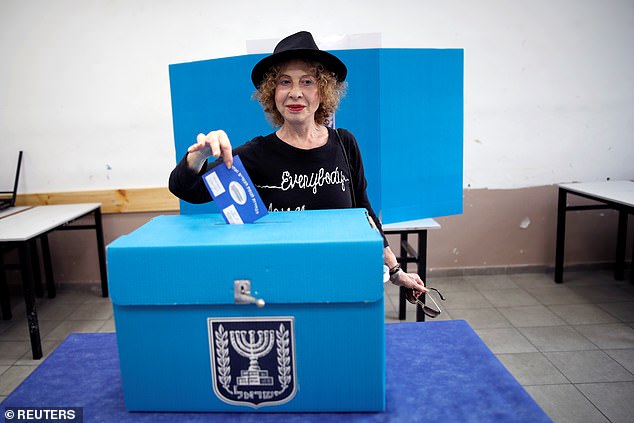 A woman casts her ballot as Israelis vote in the election at a polling station in Tel Aviv, Israel 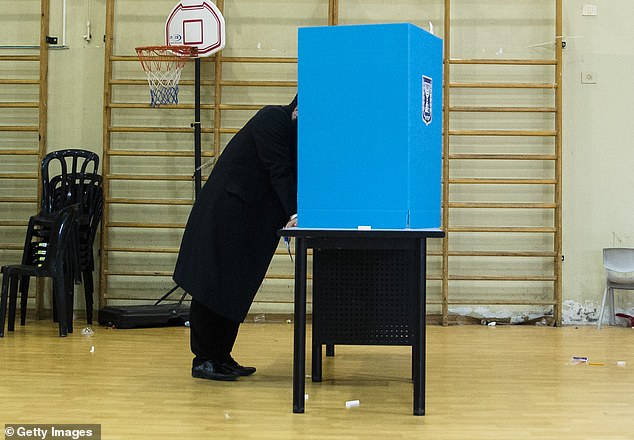 Israelis vote Tuesday in a high-stakes general election, but under the country’s complex electoral process it could be weeks before a government emerges. Here is a timeline:

April 10 The Central Elections Committee will release preliminary results after most ballots have been counted.

About 40 parties ran in the election but only a dozen are likely to have garnered enough votes to get a seat in parliament.

A day or two after the votes are counted President Reuven Rivlin will open consultations with the parties elected and ask them to recommend who is best placed to form a coalition government.

April 17 The deadline for the elections committee to announce final official results, after ruling on any appeals or legal challenges.

April 23 The elected legislators are sworn in at the opening session of the new Knesset, or parliament.

April 24 The deadline for Rivlin to announce his choice for an attempt to form a coalition.

The candidate has an initial 28 days to do the job, with a further 14-day extension available on demand.

Should the attempt fail, Rivlin can again take soundings among the parties and ask another candidate to try to build a viable alliance.

This time the attempt is limited to 28 days in total.

If that too fails, two more attempts are granted to other candidates on a diminishing time scale and then fresh elections are called.

End of May If all goes well and the initial coalition builder succeeds, they will present the new government, which will be sworn in at the Knesset in early June.

As many as a half-dozen parties are teetering along the threshold for entering the Knesset, or parliament.

A failure by any of these parties to get the required 3.25 per cent of total votes cast could have a dramatic impact on who ultimately forms the next coalition.

The Israeli government needs a parliamentary majority to rule, and since no party has ever earned more than half of the 120 seats in the Knesset, a coalition is required.

Netanyahu and Gantz have ruled out sitting together in government, so the next prime minister will likely come down to how many supporters each candidate can recruit.

Israel’s president, Reuven Rivlin, could play an important role. Though largely a ceremonial post, the president is responsible for choosing the candidate with the best chance of building a stable coalition government as prime minister.

Rivlin told voters as he cast his ballot in Jerusalem that ‘the only ones that will determine who will be prime minister, and what the next government will be, are you.’

‘And in order for you to influence, you must vote,’ he said.

In the campaign’s final days, Netanyahu has veered to the right and embarked on a media blitz in which he portrays himself as the underdog and frantically warns that ‘the right-wing government is in danger.’

His nationalist allies, however, see the move as a repeat of his 2015 election tactic to draw away their voters as he did four years ago when on election day, he warned of Arabs turning out in ‘droves.’ The scare tactics were seen as helping him seal a come-from-behind victory. 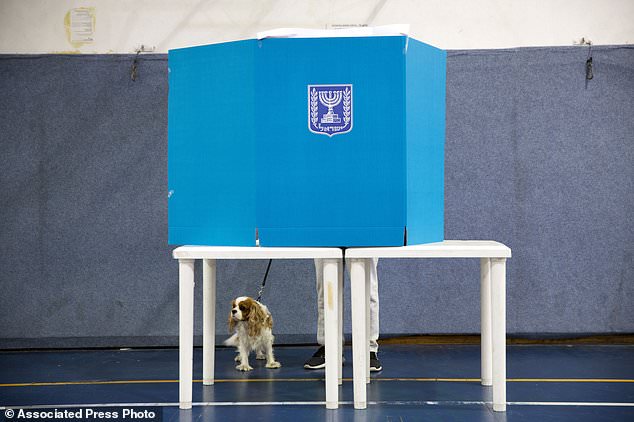 An Israeli man votes for Israel’s parliamentary election at a polling station in Ramat Gan, Israel 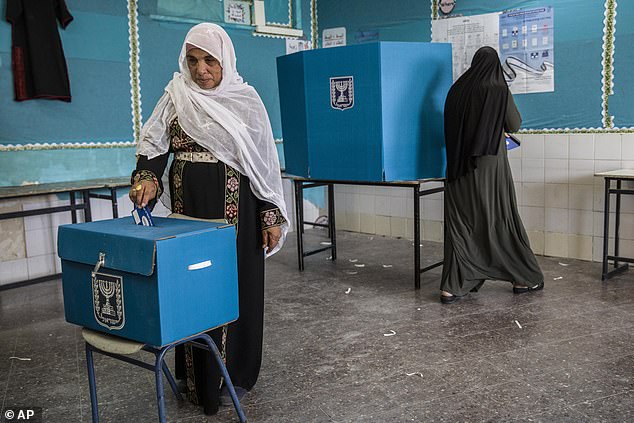 Israeli Bedouin woman votes during general elections in the city of Rahat, Israel 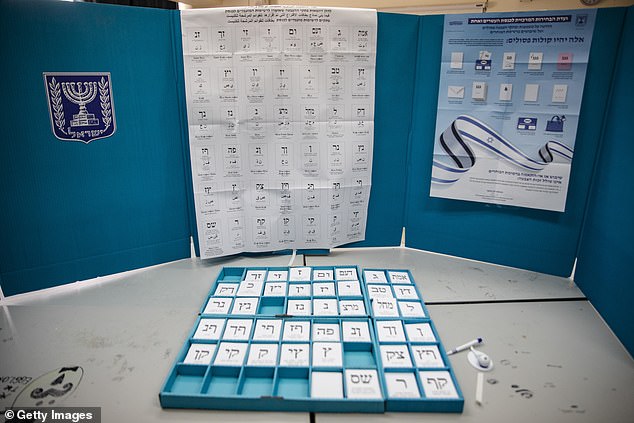 Inside a voting booth in Tel Aviv, Israel, as the country’s Knesset elections get underway

Arab turnout will be a major issue this time as well. Netanyahu’s campaign against Arab politicians, together with the new alliance with anti-Arab extremists and the passage of last year’s contentious nation-state law, which enshrined Israel as the homeland of the Jewish people alone, have deepened calls for a ballot boycott in Arab communities.

But some hope these blows will have the opposite effect, fueling enough frustration to drive up the Arab participation rate, which is typically lower than that of Israeli Jews. A big Arab turnout could push smaller right-wing parties into the margins and even threaten Netanyahu’s long rule.

The leftist Meretz even put out a video urging Arabs to vote. ‘Bibi is counting on you. Because if you don’t vote, Bibi wins,’ it said, referring to Netanyahu by his nickname.

The Palestinian issue has been largely sidelined in the election campaign that has been long on scandal and short on substance. But in a reminder, the military says it imposed a 24-hour closure on the West Bank and Gaza throughout election day, based on its security assessments. 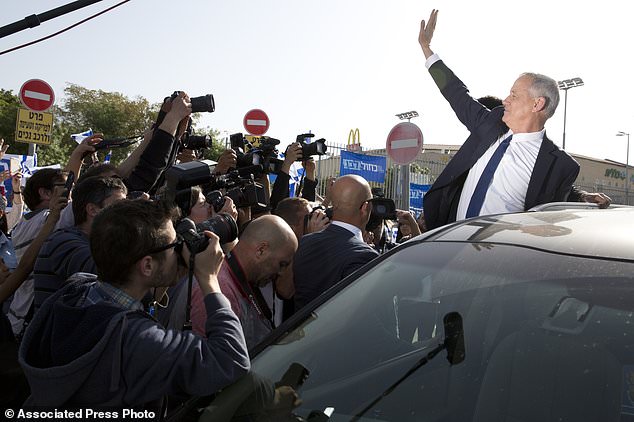 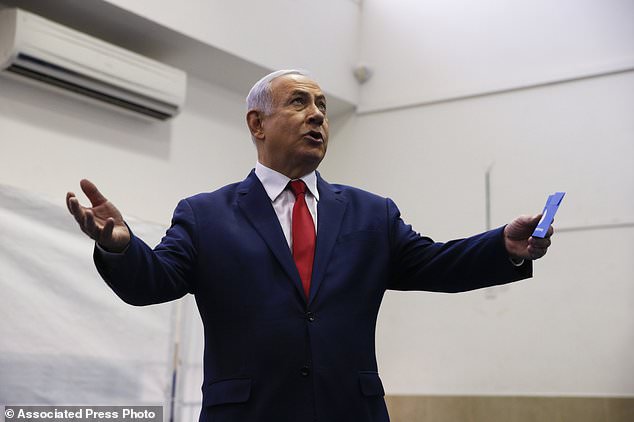 Even if he is re-elected, Netanyahu could have a difficult time governing. Some of his allies have indicated they will no longer back him if formal charges are filed.

Israel’s attorney general has recommended indicting him on bribery and breach of trust charges in three separate cases. Rivals have also begun to question a deal in which Netanyahu reportedly earned $4 million on a German submarine sale to Egypt by owning shares in one of the German manufacturer’s suppliers.

The full results of the Channel 12 poll

Netanyahu denies any wrongdoing and claims the accusations are part of a liberal media’s orchestrated witch hunt against him.

Netanyahu has generated much of his popularity from projecting a tough image in the face of Iran’s rising power and for keeping Israel safe and prosperous in a hostile region.

But in Gantz he has encountered the rare opponent who can match his security credentials. Along with two other former military chiefs on his ticket, Gantz has attacked Netanyahu for failing to halt rocket fire from the Hamas-ruled Gaza Strip.

The telegenic Gantz, who has been vague on key policy fronts, has presented himself as a clean, scandal-free alternative to Netanyahu and has vowed to heal the rifts the longtime leader has created in Israeli society. 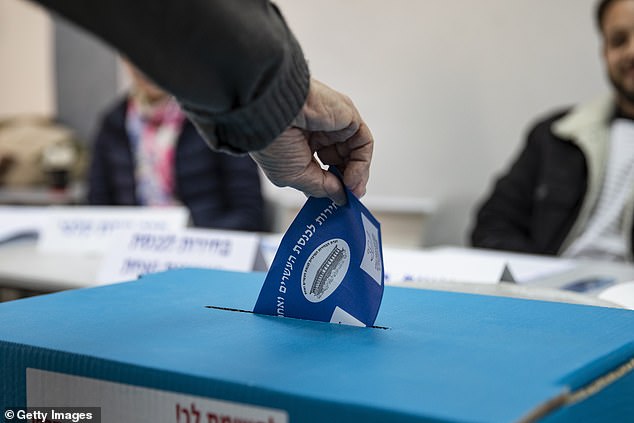 A man casts his vote during the Israeli general elections in Tel Aviv, Israel

Netanyahu is accused intimidating voters by sending staff to spy at Arab-majority voting hubs with hidden cameras as Israel goes to the polls.

Israeli Prime Minister Benjamin Netanyahu’s party has been accused of sending monitors equipped with body cameras to a number of polling stations with Arab constituents on election day.

The Israeli daily Haaretz published videos showing activists caught with cameras by police, with one confessing Likud had sent him.

Police said they were working to ‘maintain public order’ after ‘a number of suspected irregularities’ in northern polls.

Arab parties lambasted the cameras as a ploy to depress their constituents’ turnout.

The Likud party declined to comment, but when a reporter asked Netanyahu about the claims as he cast his ballot, he responded, ‘There should be cameras everywhere. Not hidden. It’s important to ensure a legitimate vote.’