Ellie Bamber was transformed into the role of 1960s siren Mandy Rice-Davies on Tuesday, as she filmed scenes for The Trial Of Christine Keeler outside Bristol Crown Court.

The former Les Misérables star rocked a blonde beehive, oversized glasses and a mint green frock as she filmed scenes with co-star Sophie Cookson, who plays the model Christine Keeler.

The drama will tell the true story of two models who were embroiled in a political scandal, when Keeler had an affair with the married Secretary Of State For War John Profumo. 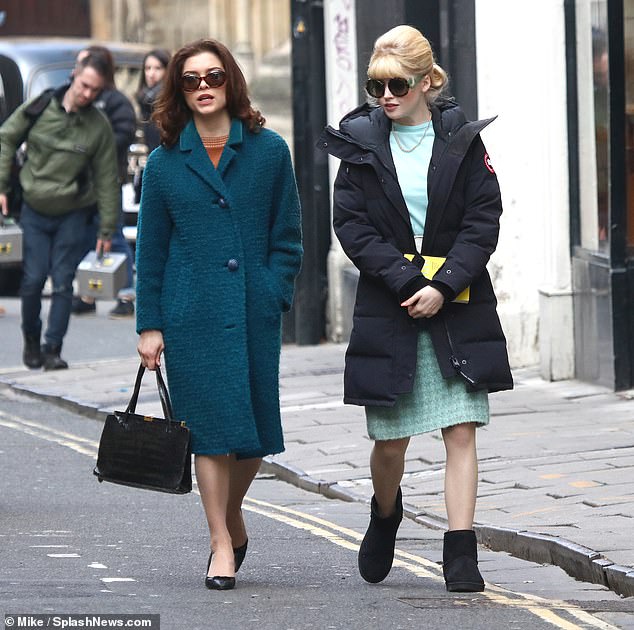 Gorgeous: Ellie Bamber was transformed into the role of 1960s siren Mandy Rice-Davies on Tuesday, as she filmed scenes for The Trial Of Christine Keeler with co-star Sophie Cookson

Thanks to their voluminous hairstyles and tweed miniskirts, both Ellie and Sophie looked as if they had been plucked from the Swinging Sixties, as they filmed scenes together in Bristol.

While Ellie opted for a mint-green ensemble with her voluminous blonde beehive, Sophie styled her brunette tresses into loose curls, along with a blue overcoat and classic orange outfit.

As the series nears the end of filming, Ellie spoke to the about her role in the series, playing Keeler’s friend Mandy Rice-Davies. 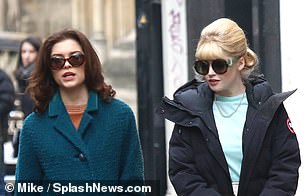 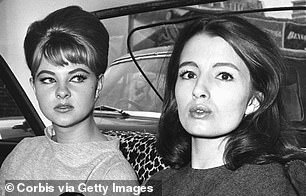 Flawless: Ellie will take on the role of model Mandy Rice-Davies, the friend of Keeler who was embroiled in the Profumo Affair (right during the trial in 1963) 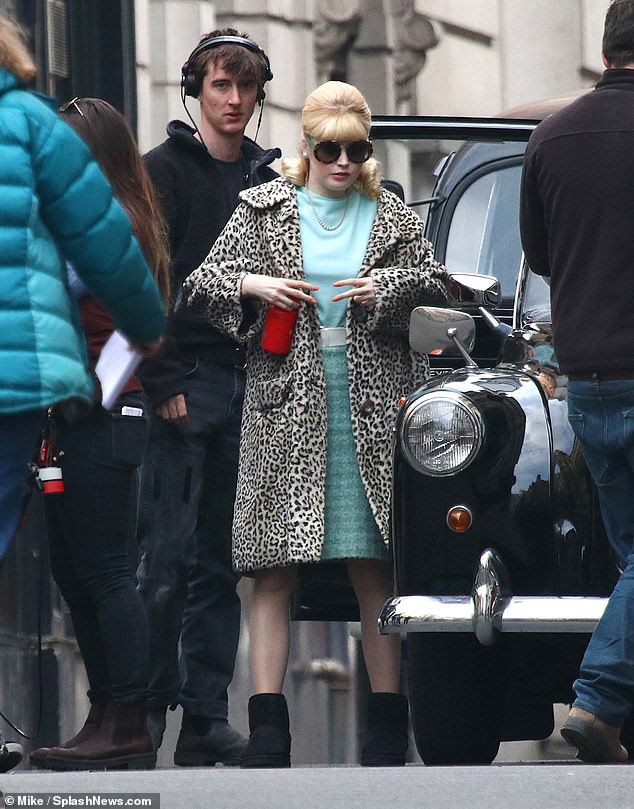 She told the publication that this series will be the first time the Profumo Affair has been told from a woman’s perspective, adding: ‘I think it’s really important because they weren’t prostitutes, they weren’t w****s, they were just two very, very young women who were totally manipulated and called names that they definitely weren’t.

‘I think it’s about time the truth comes out and people actually look at it without judgement.’

The BBC six-part drama – set to for release in November – will explore 19-year-old Keeler’s role in the scandal, which later became known as the Profumo Affair. 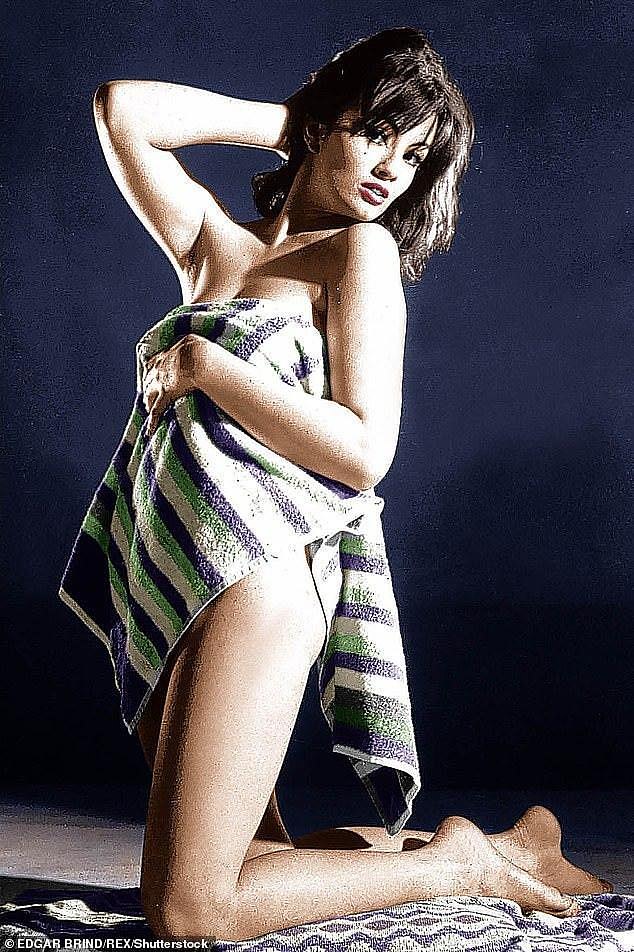 Candid: Keeler, who died in December 2017, once told the Daily Mail’s Baz Bamigboye that the events she was involved in back in the early Sixties ‘stole [her] life’

In 1961, Keeler had a brief fling with John Profumo, the Secretary of State for War, who was married to film actress Valerie Hobson.

The ensuing scandal hurled the young model and her friend, Rice-Davies, into the public spotlight, and ruined many of those caught up in it. 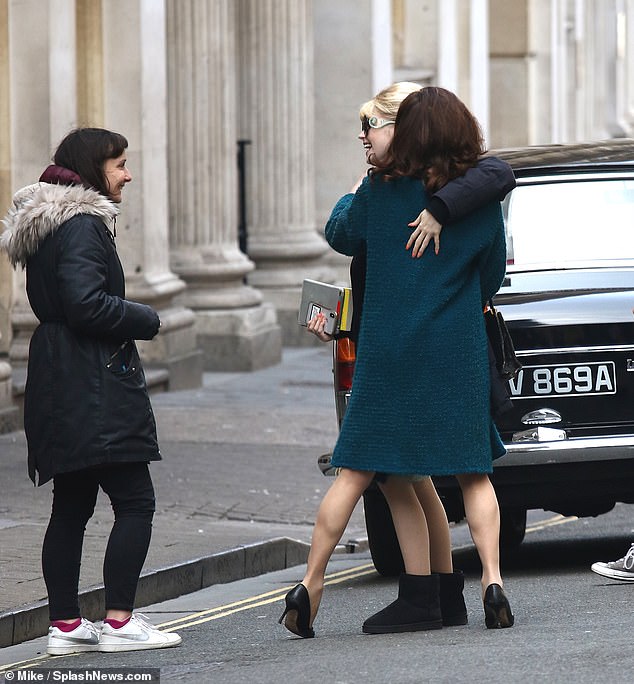 Back soon: The pair showed off their close bond on-set as they arrived for filming, as Ellie told the Evening Standard this is the first time the story will be told from the women’s perspective

Stephen Ward, the society osteopath who introduced Keeler to his friends in high places, committed suicide during his 1963 trial for living off immoral earnings.

The model, who died in December 2017, once told the Daily Mail’s Baz Bamigboye that the events she was involved in back in the early Sixties ‘stole [her] life’.

Her son, Seymour Platt, echoed this point, as he noted to Bamigboye that his mother ‘earned her place in British history, but at a huge personal price’. 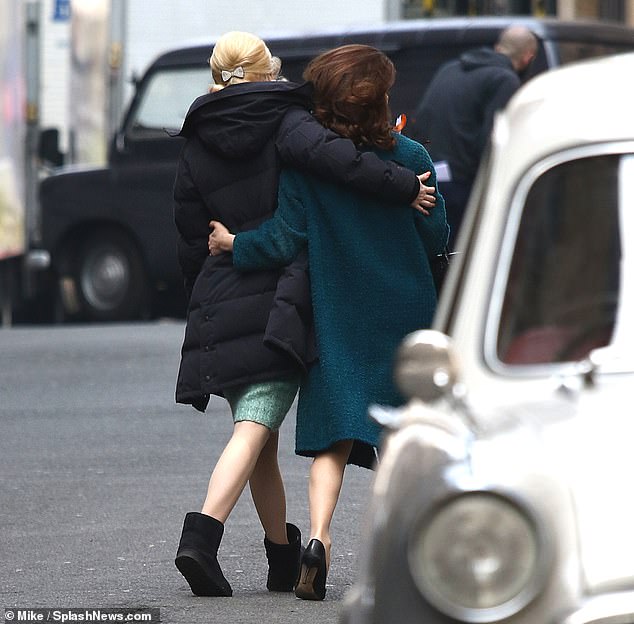 Back soon: The six-part BBC drama is expected to air in November 2019