A mum-of-two has sparked a heated debate online after revealing that her husband rebooked their family holiday to avoid going away with her mother and siblings.

Writing under the handle ‘shoeshoebadoo’, the woman took to British parenting site  to ask others how they would react if their partner had gone to such lengths to snub his in-laws.

The furious mother explained that her husband had paid for them to go away with their two children, prompting her own mum to book a visit to the same resort along with the woman’s sister and brother – without asking first.

Upon discovering her mother and siblings planned to join their family holiday, the woman’s enraged husband changed the dates of their vacation, causing his mother-in-law to ‘break down into tears’.

The post divided users of the forum, with many arguing that the mother was being ‘manipulative’ by booking to go on the trip without asking, while others agreed the husband should have gone along with the arrangement. 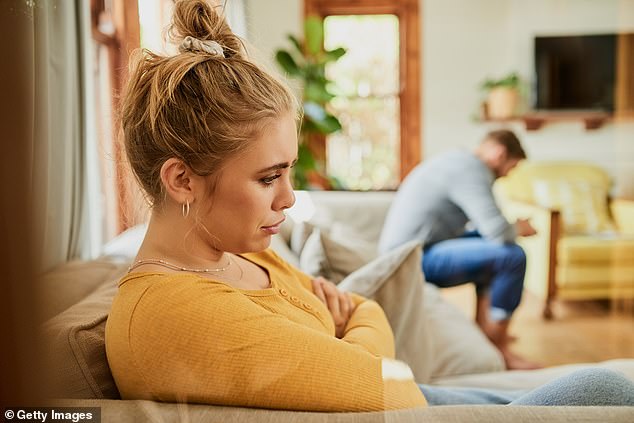 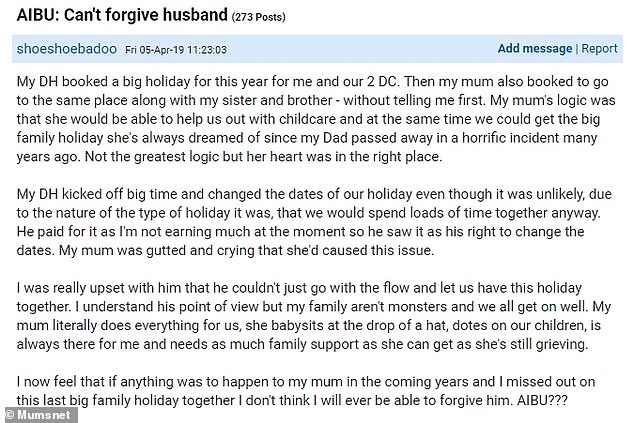 Many commenters argued that the woman’s husband was in the right and claimed they would be just as angry as him if faced with the situation.

One person said: ‘YABU (you are being unreasonable) and I am completely with your DH (dear husband) on this. Your mum was a CF (cheeky ******) doing this without getting agreement from both of you.

‘If you want a big family holiday, you and everyone involved need to plan it together and make sure everyone is on board with it.’

Another wrote: ‘YABVVU (you are being very unreasonable) and it’s your manipulative mother you should be angry with.

‘Well done to you DH for not being railroaded by your mother, he knows how manipulative your mother is unlike yourself who seems to conditioned to it.’

A third added: ‘I’m sorry but I’m with your partner on this, I’d be furious about not being asked it was okay. Imagine if your in-laws had booked on without asking first!’

Others defended the mother-in-law and said the husband had overreacted by moving the holiday dates without discussing.

One user wrote: ‘Your mum should have checked first but that was an ******** thing to do. I don’t understand why he couldn’t have just had a chat with your mum and been honest, ‘MIL (mother-in-law) I really waned some time alone with OP and the kids so I’d prefer it if you asked.

‘That wouldn’t have been so hard or caused so much upset. Bit **** considering all that she does for you both.’

Another added: ‘Your mum was out of order to book without asking and that should have been explained to her. That said, when it’s already done my DH might call it cheeky but he’d go along with it the one time, there must be a backstory or changing the dates seems childish and cruel.’

A number of contributors to the thread were torn and accused both the husband and mother-in-law of being in the wrong.

One person said: ‘You are being push around by your two ‘masters’. If your mum is like this, it’s no accident you ended up with a controlling husband.

‘Your mum didn’t ask your permission. She expected you to have no say in the matter. Your opinion is of no concern to her. What matter is that she is always in control.

‘Your DH didn’t ask your permission. He expected you to have no say in the matter. Your opinion is of no concern. What matters is that he is always in control.’

Another wrote: ‘Your mum and your DH are both in the wrong here. Both should have had the decency to discuss it before making decisions affecting others.’

A third added: ‘Too hard to call. Your DH might be a massive **** but equally going say with your mum and SIL (sister-in-law) and BIL (brother-in-law) might be his worst nightmare so why should he have that imposed on him?

‘Your mum was very silly to book without discussing and I actually suspect she did it like that as she knew you/he would say no!’. 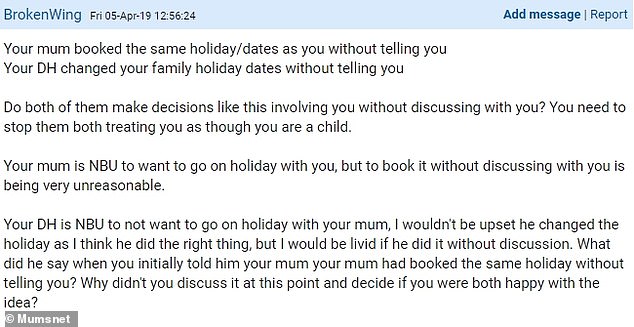 Others slammed the mother-in-law and the husband, accusing the pair of both trying to manipulate the original poster

Kylie stalker hell: Singer calls police after being left ‘very shaken’ by man
Britain is battered by 65mph gales as roofs are ripped off and trees uprooted
Innocent identical twin keeps being mistaken for his paedophile brother
Corbyn ally plans six days of walkouts at Heathrow Airport bringing travel misery
'You've got a TV!': Ross Kemp's response to Tommy Robinson's complaints about jail
Rebecca Long-Bailey's clashes with aide over her 'regressive' abortion views
Queen and Prince Philip are seen for the first time since grandson Harry left for Canada
Jacob Rees-Mogg is self-isolating after one of his children started showing coronavirus symptoms