This is the dramatic moment a suspected thief was chased and tackled to the ground by brave passers-by – despite him pulling out a knife.

Public-spirited residents were captured in mobile phone footage heroically detaining the thug in the Small Heath area of at 3.30pm on Saturday.

He was originally stopped in his tracks on Grange Road by several men who accused him of stealing a woman’s purse at a bus stop moments earlier. 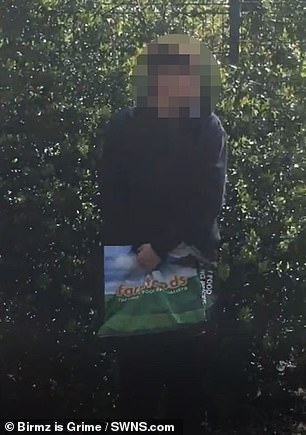 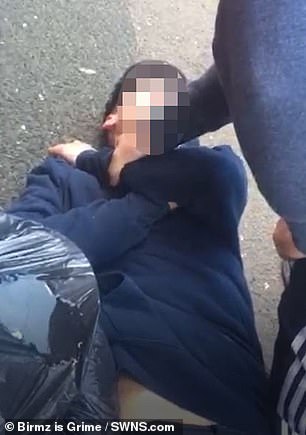 The suspect was arrested by passers-by who accused him of stealing a woman’s bag. After they refused to let him go he reached into a bag (left) and pulled out a knife. The men then chased him around the corner and pinned him to the ground (right)

The agitated suspect begged with his captors to let him go and even got down on his knees to ‘ask for forgiveness’ when his alleged victim arrived.

He could be heard saying ‘please brother, let me go, I’m sorry, I’ve f***ed up’ but the group of men refused and police were called.

Realising he was not going to be let off, the man then reached into a Farmfoods bag and pulled out a large kitchen knife around four inches long.

But rather than running away, the men chased the suspect down a nearby street where he allegedly threatened them with the blade. He was then pinned to the ground.

The footage was filmed by Birmz Is Grime and uploaded to their social media channels where it has already been viewed thousands of times.

Brummies have since praised the have-a-go heroes’ courageous actions. 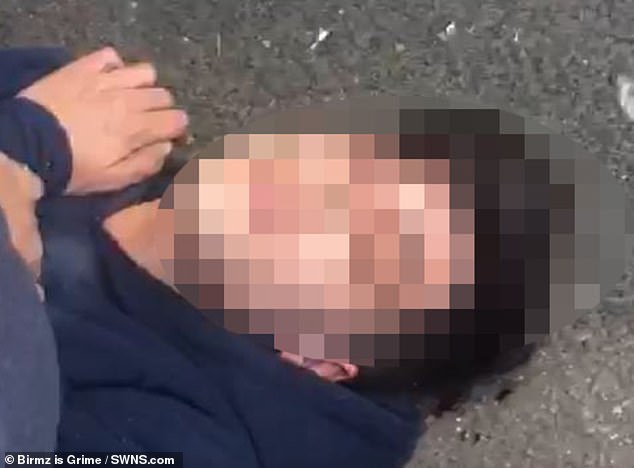 The man was later arrested by police, who praised the bravery of the people who tackled him. He is pictured here on the floor. His face has been obscured for legal reasons

Zoia Samaya Theone wrote: ‘I really appreciate the act of these men. It could’ve been my mum, sisters, aunts or even me. Thank you.’

Kimberley Matthews said: ‘Well done to the guys that risked their own life to help the young girl!!! That knife was massive could have been a lot worse.’

Stuart Griffiths added: ‘Well done lads, love it when people come together to do good.’

Jason Charles Cooper Perry put: ‘Well done, working as a community all should stand together like this.’

Szymon Rorbach said: ‘We need more people like those guy, all due respect lads.’

West Midlands Police today praised the ‘public spirit’ of the men who detained the knifeman and commended their bravery.

The force confirmed they received a 999 call at around 1.50pm on Saturday after members of the public detained the man on Grange Road, Small Heath. 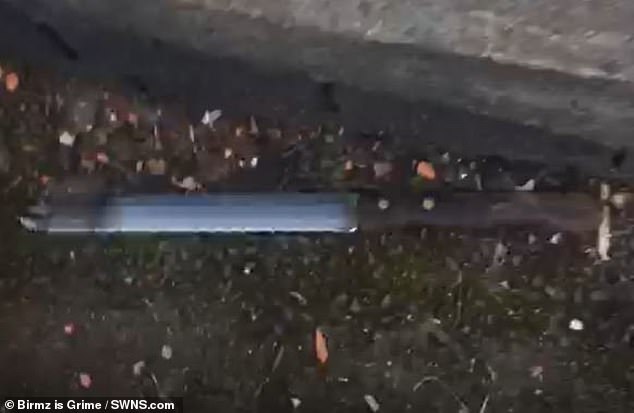 The blade the suspect pulled out of the bag was around four inches long, and is pictured here

A police spokesman said: ‘It’s understood the suspect, aged 22, snatched the phone from the woman as she sat at a bus stop before making off on a pedal cycle.

‘He was stopped by members of the public a short distance away but then threatened the group with what appeared to be a serrated carving knife.

‘The man was arrested at the scene by police and transferred to hospital for treatment to injuries sustained during the citizens’ arrest.

‘He remained in hospital overnight and will be interviewed in due course.’

Chief Inspector Stu Bill, of West Midlands Police, said: ‘I’d like to praise the public spirit of the people involved in detaining the suspect…they were determined he wouldn’t get away and I applaud their bravery.’

Dad who raised £2,000 for Christmas is targeted by scammers posing as him to ask for MORE donations
Director of James Bulger film admits he didn't contact family
Qantas flight from London to Singapore dumps fuel over the Channel and returns to Heathrow
Extinction Rebellion leaders praise 'beautiful beings' who caused chaos across London for two weeks
What really went on inside the England dressing room after dramatic World Cup final victory
Brighton schoolboy Leon spends £3,000 on Minecraft and Roblox without mum knowing on credit card
ANDREW LLOYD WEBBER asks why the real Profumo story is still locked in a vault
The rise of Rishi Sunak, the new Chancellor of the Exchequer