hit gangster drama Peaky Blinders has been accused of glorifying violence and promoting toxic masculinity by a US-based academic.

The award-winning show, which revolves around the lives of the fictional Shelby crime family in post-World War One , has become one of the broadcaster’s most popular programmes with an average four million people tuning in to each episode.

It is loosely based on a real-life gang who used the same name – referring to their peaked flat caps – and the show is expected to return for a hotly-anticipated fifth series later this year.

But British-born academic Dr George S Larke-Walsh, of the University of North , has published a paper claiming the show’s writers use the war as an excuse to justify and romanticise violent behaviour.

The release date for series five has not yet been announced but is expected to air in the summer or early autumn on BBCOne. 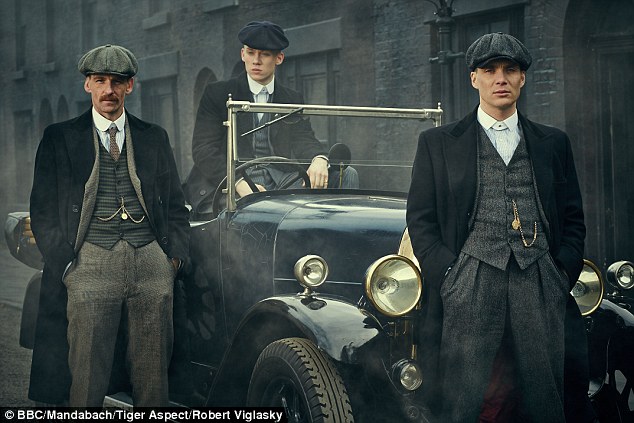 BBC hit drama Peaky Blinders has been criticised in an academic paper for glorifying violence. Pictured from left are Paul Anderson, Joe Cole and Cillian Murphy as gangsters Arthur, John and Tommy Shelby, central members of the criminal gang portrayed in the show 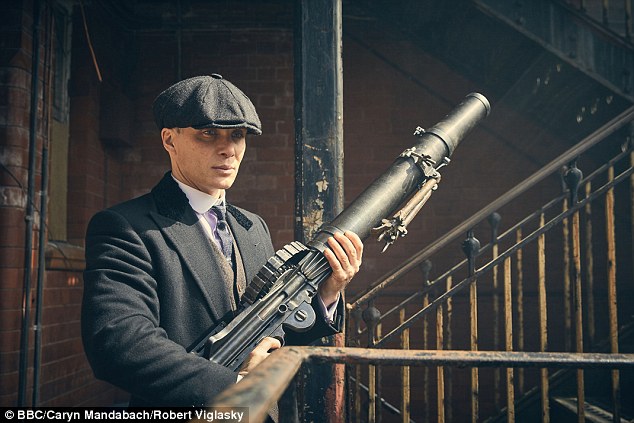 Dr George S Larke-Walsh said the show justified the brutal violence by portraying the characters as damaged by World War One. Pictured is Murphy as Tommy Shelby

She claims the characters, including Cillian Murphy’s gang leader Tommy Shelby, are all shown to be damaged by the war to excuse their criminal actions.

Dr Larke-Walsh also claims they are made out as Robin Hood-esque characters fighting for survival in a ‘corrupt’ world while they also use the Shelby family’s gypsy heritage as a ‘distraction’.

In her paper, seen by , she writes: ‘It [Peaky Blinders] utilises nostalgia for nationalism, enacted within displays of extreme aggression as well as promoting regressive masculine ideals … In the current sociopolitical environment, and associated concerns about the prevalence of toxic masculinity, such presentations no longer feel safely confined to fantasy.’

The paper, titled ‘The King’s shilling’: How Peaky Blinders uses the experience of war to justify and celebrate toxic masculinity, also suggests the show uses Murphy’s naked body to ‘elicit homosexual desire’ but then ‘asserts heterosexuality’ through brutal violence. 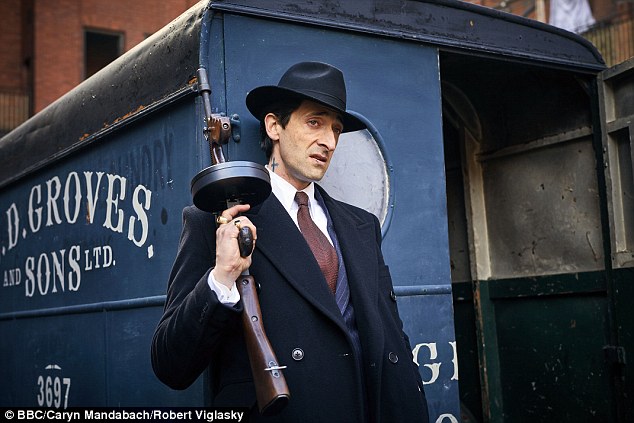 The drama has won a host of awards and has an average audience of around 4million per episode. It has become so successful it has attracted stars such as Oscar-winning actor Adrien Brody, pictured

She added: ‘There is no doubt that all audiences are meant to find the characters visually attractive. It is a feature of regressive masculinity that homosexuality must be denied.’

Dr Larke-Walsh previously obtained a PhD in film studies at the University of Sunderland before moving to the US, and has written other papers on The Godfather and The Sopranos looking at the connections between Italian-American crime families.

The producers of Peaky Blinders said the show ‘invites viewers to consider the effect of violence on men, and the terrible and long-lasting consequences on both men and women of gang violence, poverty and, most of all, armed conflict’.

Dr Larke-Walsh told the times she is a ‘fan’ of the Bafta-winning show but wanted to highlight the ‘complex nature of its depiction of violent masculinity’.

Who were the real Peaky Blinders?

With their flat caps and jackets, the crooks in these old mugshots might remind you of the Artful Dodger, the lovable rogue from Oliver Twist.

But the Victorian boys and men, pictured in photos from a police archive, did much worse than pick a pocket or two.

Harry Fowler, Ernest Bayles, Stephen McHickie and Thomas Gilbert, pictured, were members of the notorious ‘Peaky Blinders’ gang which terrorised Birmingham around the turn of the 20th century. 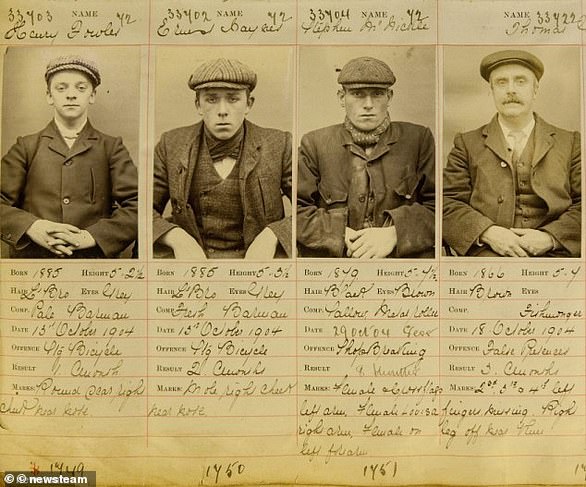 (From left) Harry Fowler, Ernest Bayles, Stephen McHickie and Thomas Gilbert were all members of the real life Peaky Blinders gang that inspired the BBC show 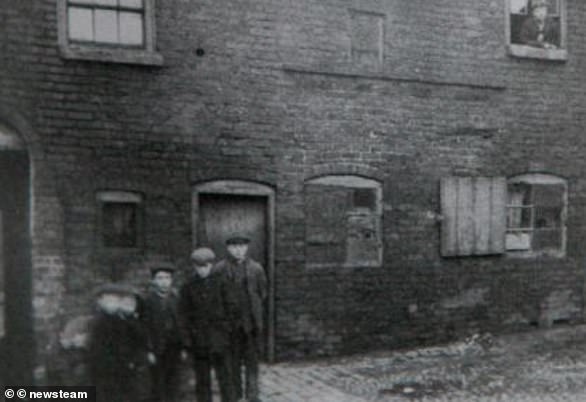 The gang earned their name because they sewed razor blades into their flat caps, which they would use to headbutt rivals. Pictured are a group of young members in the early 1900s in Birmingham

The gang earned its chilling nickname through the practice of sewing razor blades into the peaks of their flat caps, so that they could blind rival gangsters by headbutting them.

They ruled the industrialised areas of Bordesley and Small Heath from the 1880s through to the early 1900s, when the city was one of the world’s most important manufacturing hubs.

Charge sheets from 100 years ago show that, despite the reputation of the gang for terrible crimes, these men and boys had been hauled up on relatively trivial offences.

Fowler and Bayles, aged just 19 in the photographs, were charged with ‘bike theft’ after stealing the unattended item and attempting to sell it on. 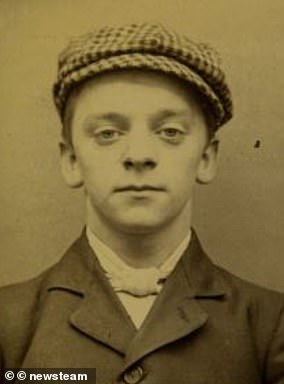 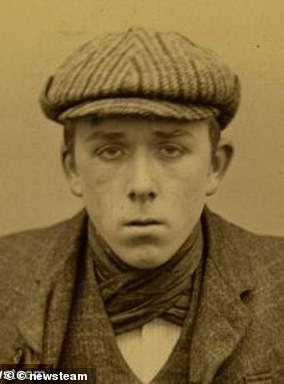 Police had such trouble with the gang but were eventually only able to charge some members with relatively minor offences. Pictured are Fowler, left, and Bayles, right, who were caught for bike theft

Stephen McHickie, 25 when pictured, was charged with breaking into a drapers shop which was just 11 doors from his own home.

Thomas Gilbert, much older than the others at 38, was arrested for the crime of ‘false pretences’.

Court reports from the time refer to the gang members as ‘foul mouthed young men who stalk the streets in drunken groups, insulting and mugging passers-by.’

But theft and muggings was by no means the only illegal activity of the Peaky Blinders, who built a criminal empire on illegal betting, protection rackets and Birmingham’s black market.

The were known to fight with rival gangs, and at times would even turn on the police. 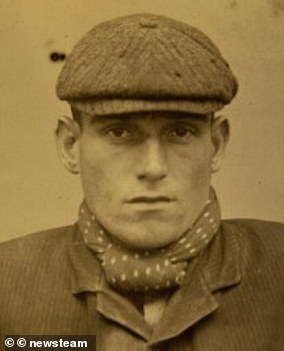 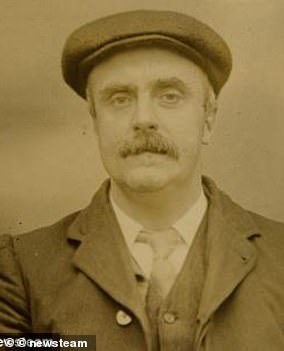 McHickie, left, and Gilbert, right, were also charged over lesser crimes than the gang was known for. McHickie was caught over a burglary while Gilbert was arrested for fraud