A fetus was found at a wastewater treatment plant in on Saturday morning.

Police received a 911 call at about 8.45am from the Hill Canyon Wastewater Treatment Plant in Camarillo, reported .

When officers arrived on the scene, they were told that one of the plant’s workers had found the fetus. 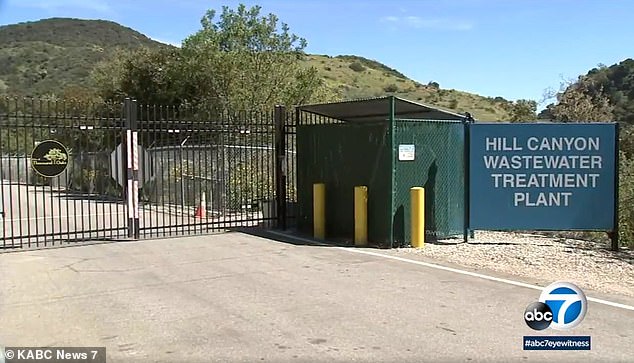 An employee discovered a fetus at the Hill Canyon Wastewater Treatment Plant in Camarillo, California, around 8.45am on Saturday

According to , the fetus was not full-term, and appears to have been in its first or second trimester.

The Ventura County Sheriff’s Department said the fetus was found in a ‘dry holding area’, which means it was not in water.

A spokesperson told the radio station that the only way the fetus could have been found where it was is if it traveled through the sewer system.

An autopsy of the fetus is expected to be conducted next week.

This is not the first time that such a grim discovery has been made at a wastewater facility this year.

In February, the remains of a fetus were found at the Conway Wastewater Treatment Plant, in New Hampshire.

Results of an autopsy showed the fetus ‘had not taken a breath, was not viable, and that the pregnancy loss was the result of a spontaneous natural miscarriage’, reported .

And last month, a fetus found in a grinder at Augusta’s Wastewater Treatment Plant in Georgia.

The mother claimed that staff at University Hospital – about 6.5 miles away – flushed the remains of the 16-week-old miscarried fetus down the toilet.

She has since filed a lawsuit against the hospital for $2million in damages, according to .