Outraged Tory activists are refusing to campaign for the local elections because they feel has betrayed them over .

In a letter penned to the Prime Minister more than 100 current and prospective councillors said they are struggling to get enough volunteers to help them fight the upcoming May local elections.

It comes after Mrs May provoked fury in her own party last week by abandoning hopes of persuading hardline Brexiteers and the DUP to support her deal and instead offering talks with on delivering a softer Brexit.

A number of MPs are apoplectic with rage at the move, while some Conservative members took to social media to cut up their membership cards. 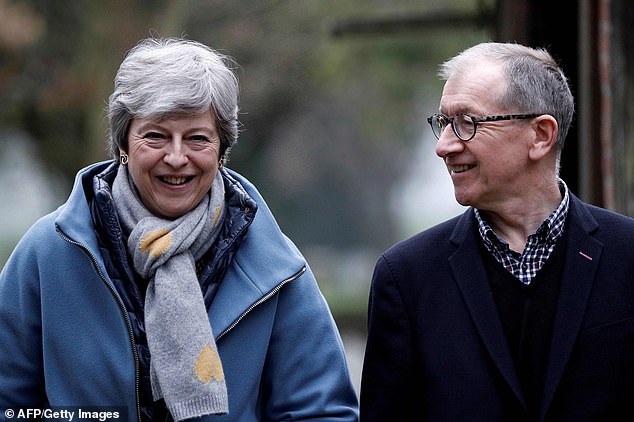 Britain’s Prime Minister Theresa May and her husband Philip leave after attending a church service, near her Maidenhead constituency, this morning. Mrs May haw provoked the anger of her party after she announced talks with Labour leader Jeremy Corbyn last week

And now councillors have warned that donations are drying up and members feel ‘betrayed over Brexit.’

A excerpt of the letter sent to the Prime Minister, seen by the said: ‘We are short of party members to come out and canvass because the belief in the party they joined is gone.

‘Many of us have knocked on the door of paid-up party members only to hear that they will no longer support Conservatives because they feel betrayed over Brexit. Donations have dried up.

‘We are extremely concerned that the Government’s breach of faith with the electorate on Brexit will result in long-serving Conservative councillors losing office through no fault of their own.

‘Democracy only works if you make manifesto promises you will intend to keep … Frankly, we have not witnessed anger and incomprehension like this.’ 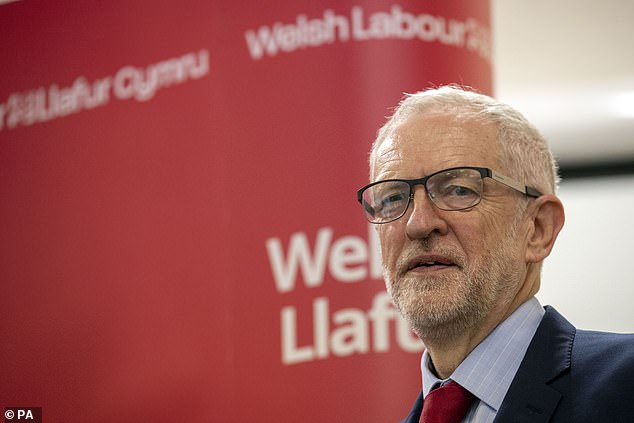 Labour party leader Jeremy Corbyn speaks at the Pill Millennium Centre, Newport, after Ruth Jones won the Newport West by-election last week. Mr Corbyn has been in discussions with Mrs May about Brexit

What happens next with Brexit?

Another summit with EU leaders – where May will ask for a new delay beyond April 12.

May’s new plan is to strike a cross-party consensus in London and persuade EU leaders it means the deal can be delivered in time for Brexit on May 22.

She may have to accept a longer extension that means holding EU elections, as Brussels has made clear this is a red line – and will take a decision on delay without Britain and it must be unanimous.

EU officials including Michel Barnier have warned that the risk of an accidental No Deal is increasing if May arrives with no plan.

Britain is due to leave the EU without a deal on this date if no delay is agreed.

Mrs May could face further resignations this week if she does agree a softer Brexit with the Labour leader or agrees a further exit delay with the EU when she attends a summit on Wednesday.

It comes just days after livid Tory activists were cutting up their membership cards and sharing the results on social media, describing Theresa May’s announcement that she will hold Brexit talks with Jeremy Corbyn as the ‘final straw’.

Pub owner Adam Brooks, from Essex, was one of many to share a photo of his chopped up card.

Mr Brooks said the Labour leader ‘has no right to be involved’ in Brexit talks and Mrs May has ‘killed’ the Conservative Party.

Lawrence Gartshore, 16, said he cancelled his membership hours after the Prime Minister’s announcement from Downing Street on Tuesday evening.

‘The Conservative Party are not conservative any longer,’ the school student from Warwick said.

‘This emphatic capitulation by May was really the final straw.’

For fellow Brexit advocate Busta Miller, 24, this is the second time he has cut up a Conservative membership card in three weeks.

‘I was angry a few weeks ago and cut up my old conservative membership card,’ the 24-year-old from Ealing said.

‘I was hoping it would show the party how people like me felt.’

After his latest card cutting, Mr Miller said: ‘Asking to meet with Corbyn for a way forward on Brexit was the last straw for me.

‘As this incompetent leader has said numerous times, no deal is better than a bad deal. Well that was just another lie among the many and I’m done with it.’

Soccer-Dier gives Spurs narrow win and sends 10-man...
Virginia lawmaker, whose bipolar son stabbed him in the face then killed himself, settles lawsuit
Moors Murders victim is buried for second time
Snowflake students replace word ‘women’ with ‘WOMXN’ because the traditional spelling contains ‘man’
New IRA is accused of carrying out car bomb attack in Londonderry
M&S speeds up its plan to shut 100 stores with an 11% fall in pre-tax profits forecast
Armed police descend on London common as man and a woman are stabbed
'At least' one person is seriously injured after an 'explosion' near a railway station