A bride has been pictured near her bombed-out family home on the day of her wedding amid rising tensions between and .

Shayma Al-Huwaity, 20, stands waving the flag of Palestine beside the property in Gaza City which was damaged during an Israeli air strike on a nearby Hamas site.

It is believed the house was destroyed as Israeli military forces pounded targets across Gaza in response to a rocket attack on an Israeli house last Monday.

The military wrecked the Hamas leader Ismail Haniyeh’s office in the strike, which was confirmed by Hamas’ radio station.

Despite the conflict, the matter has not been a talking point in Israel’s general election.

Prime Minister Benjamin Netanyahu’s ruling Likud Party has offered no plan for what many believe is the country’s most existential problem.

His main challenger – in the vote that will take place on April 9 – speaks vaguely of ‘separation,’ while Netanyahu’s hard-line partners speak openly of annexing all or parts of the West Bank.

But talk of a Palestinian state – the international community’s preferred solution for the past two decades – has not been mentioned.

It is a far cry from past elections, when peace with the Palestinians was the central issue for voters.

The apparent lack of interest reflects widespread disillusionment in Israel over years of failed peace efforts. 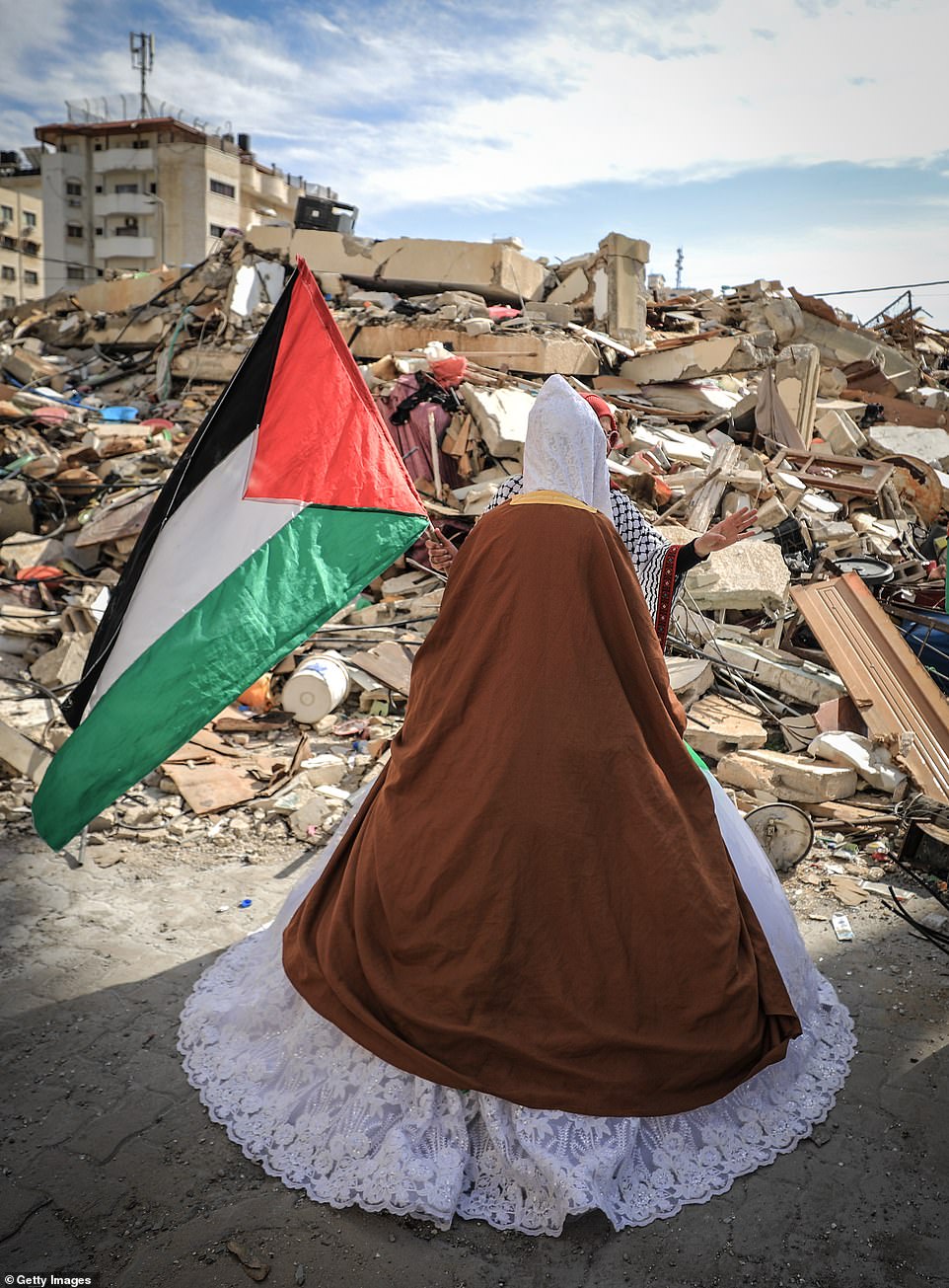 Bride Shayma Al-Huwaity holds a Palestinian flag as she visits her collapsed family home in Gaza City, Gaza today. Her Gazan groom took her from Head of the Political Bureau of Hamas, Ismail Haniya’s house instead of her family home after it was destroyed in an Israeli attack 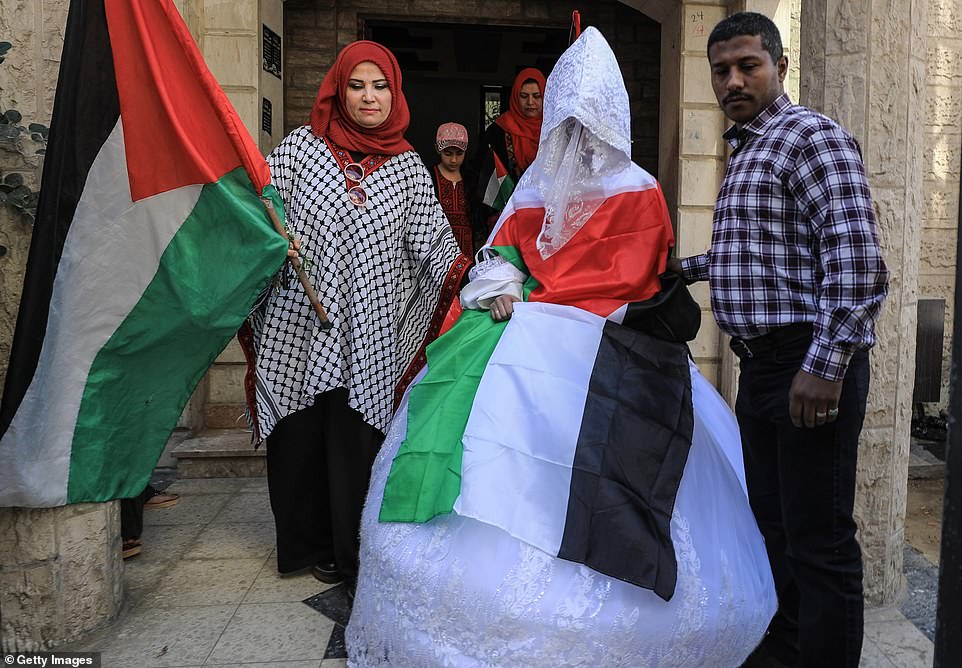 The 20-year-old wears a wedding dress which also has the flag of Palestine on it. She is led away from Haniya’s house with a hood pulled over her head 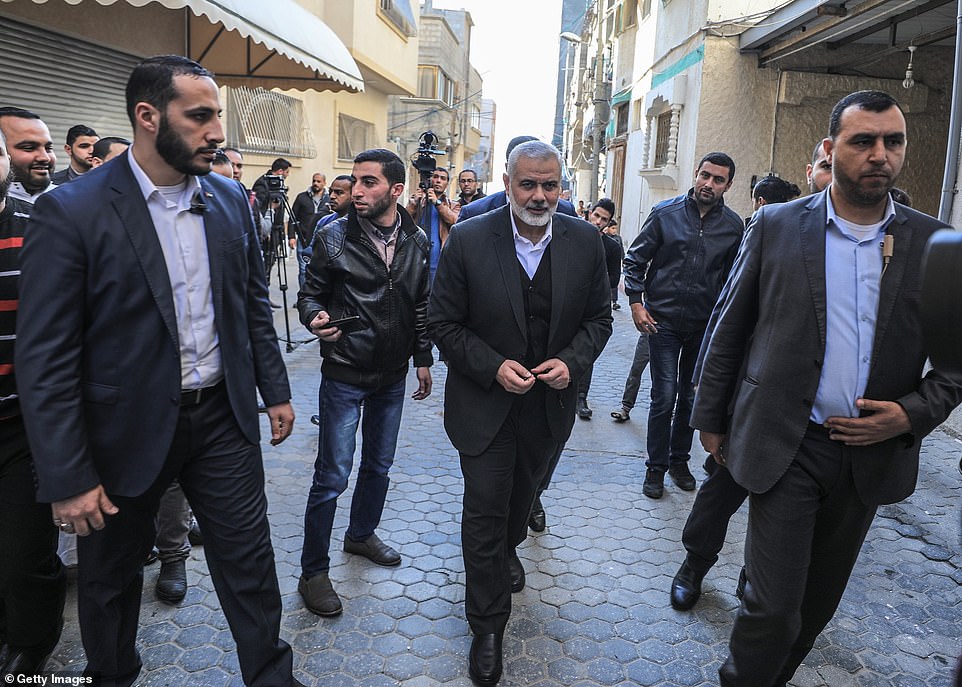 Head of the Political Bureau of Hamas, Ismail Haniya (centre) walks to attend the wedding in Gaza City today with a group of men and closely followed by television crews. Since March 2018, Hamas has orchestrated weekly border protests against an Israeli-Egyptian blockade 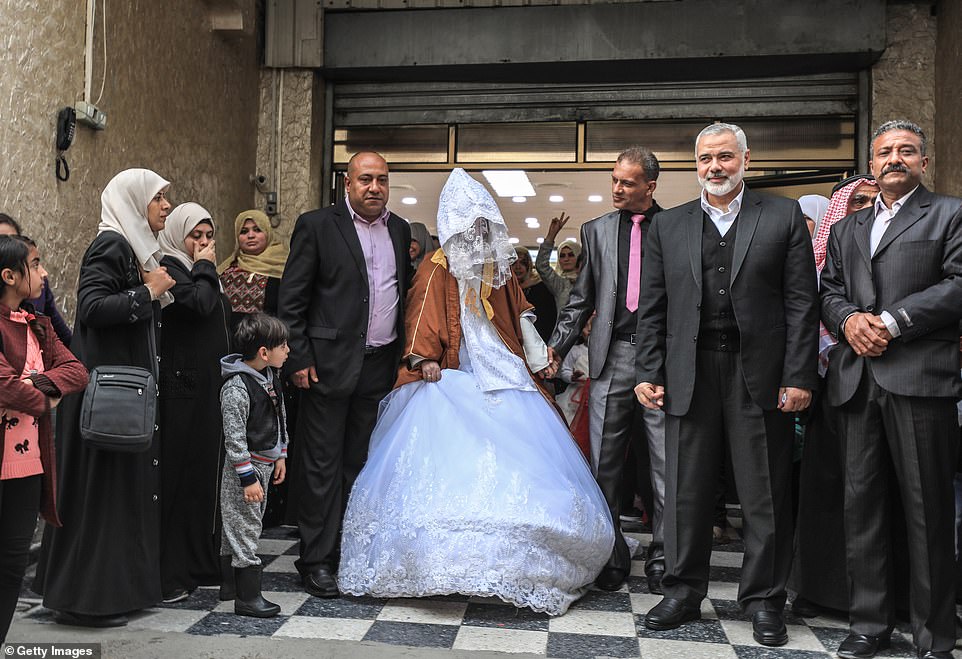 Haniya (second from right) stands near the bride and groom ahead of the wedding. Family members look on as the new couple leave the venue 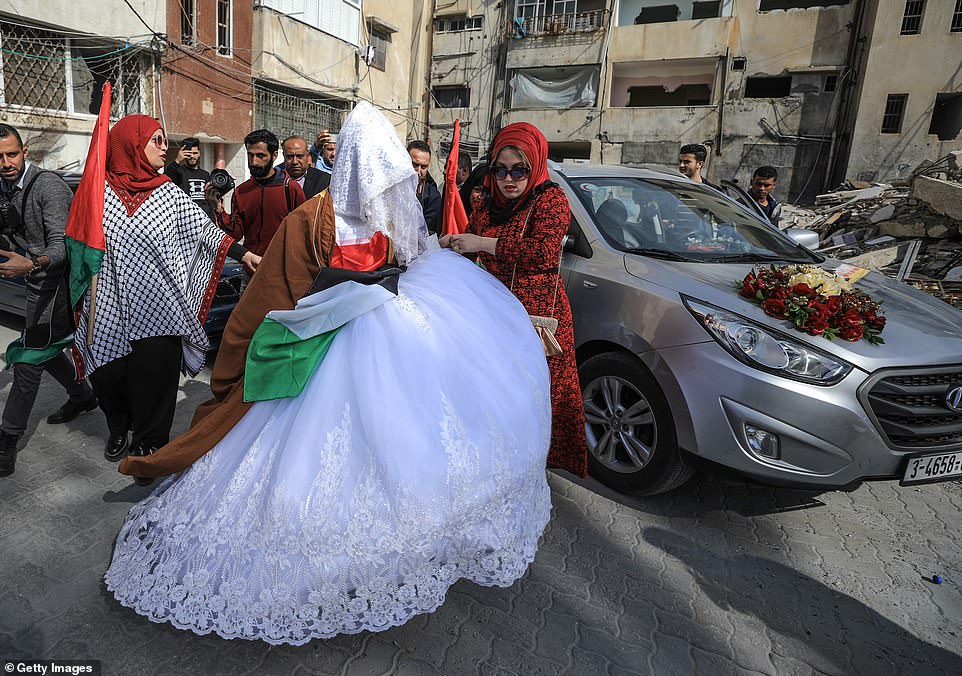 Ms Al-Huwaity dons a brown jacket as she is led approaches what appears to be her wedding car with a bouquet on it. The background shows bombed-out buildings in Gaza City 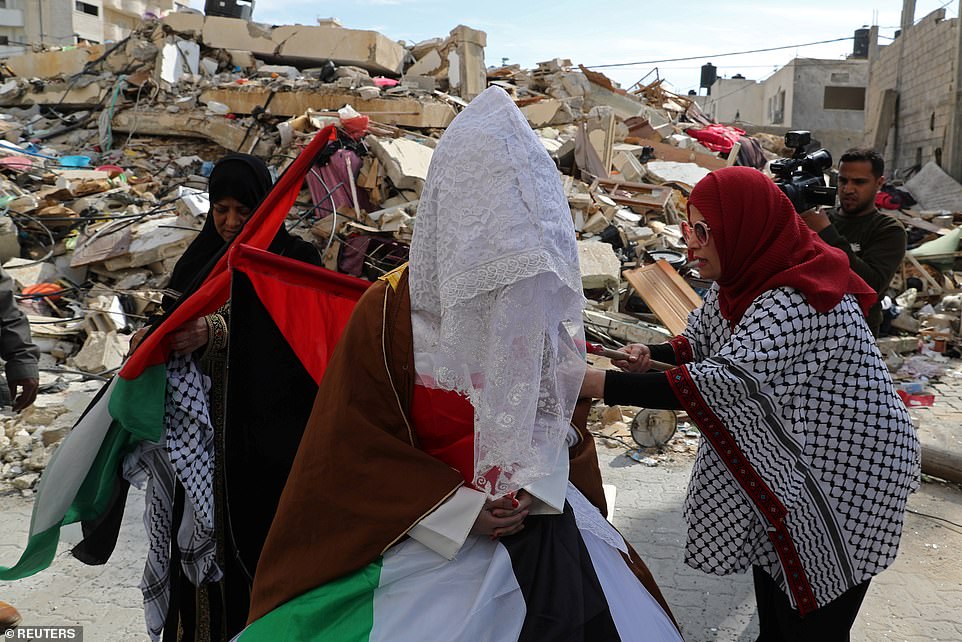 The bride stands before her crumpled family home. The property was damaged during an Israeli air strike on a nearly Hamas site 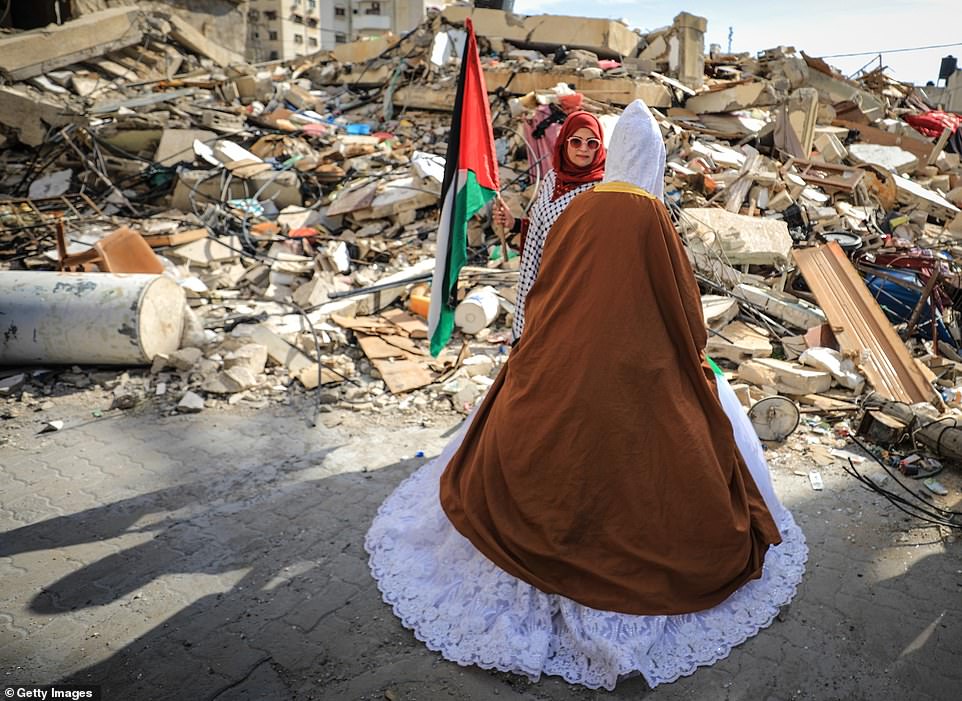 The military wrecked the Hamas leader Ismail Haniyeh’s office in the strike as well, which was confirmed by Hamas’ radio station last Monday 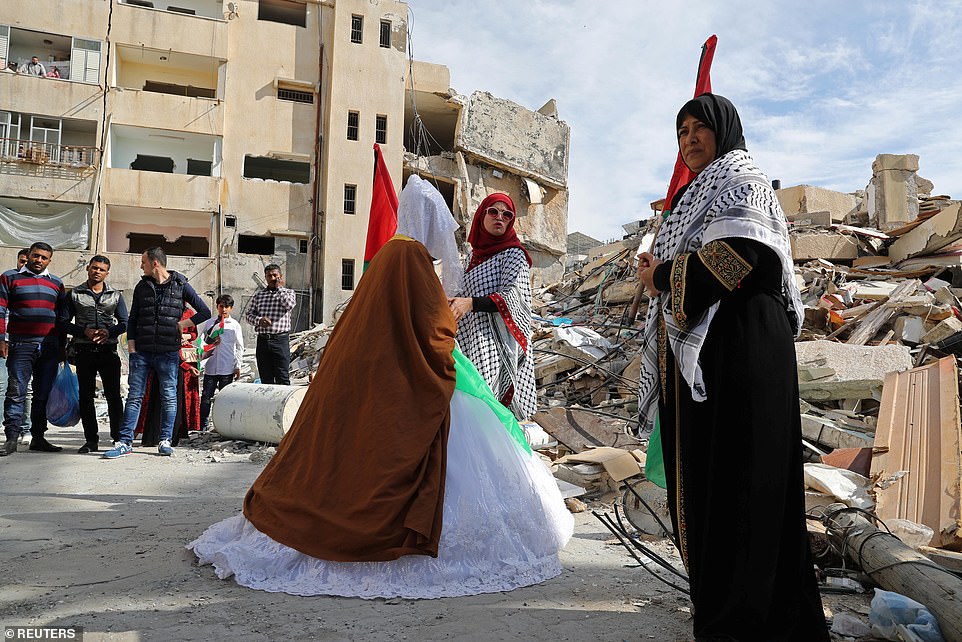 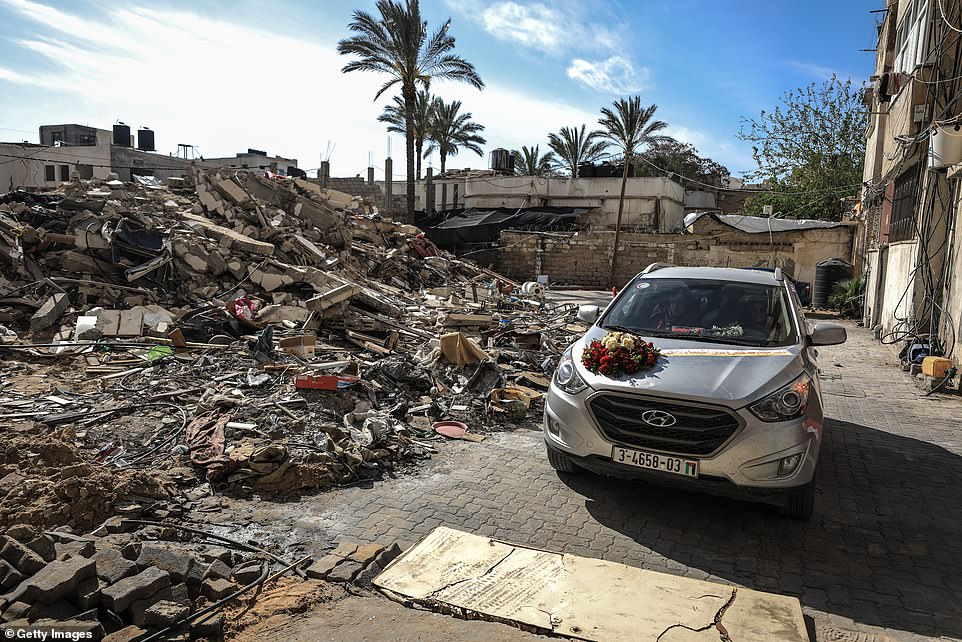 Another angle shows the devastation left by the bombs. The bride’s wedding vehicle, a Hyundai, is parked next to the scene with flowers arranged on it 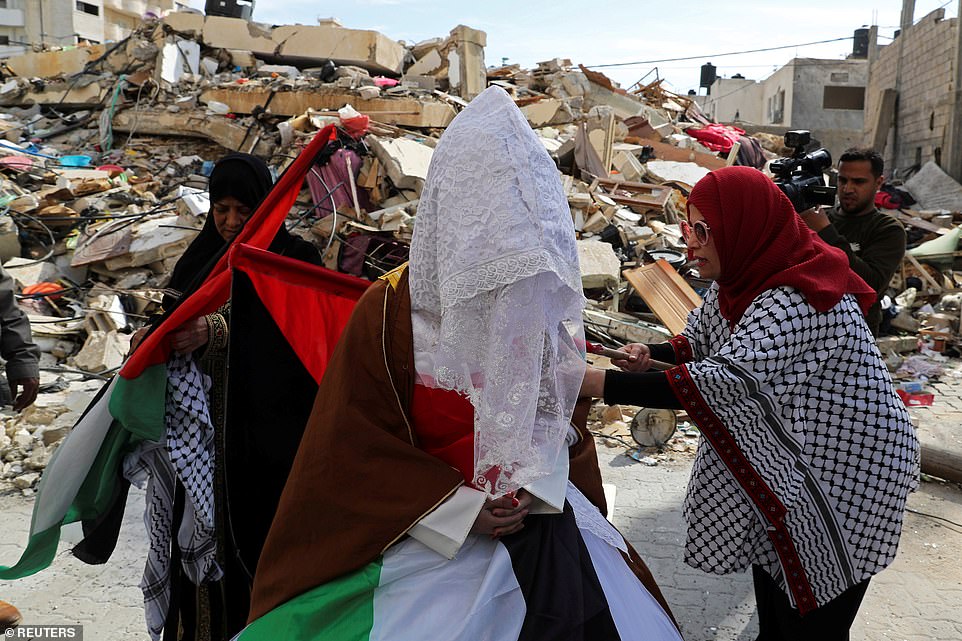 Friends of the bride work to sort out the back of her dress as a television cameraman records the ceremony. The backdrop of  her former family home shows a large pile of the family’s belongings 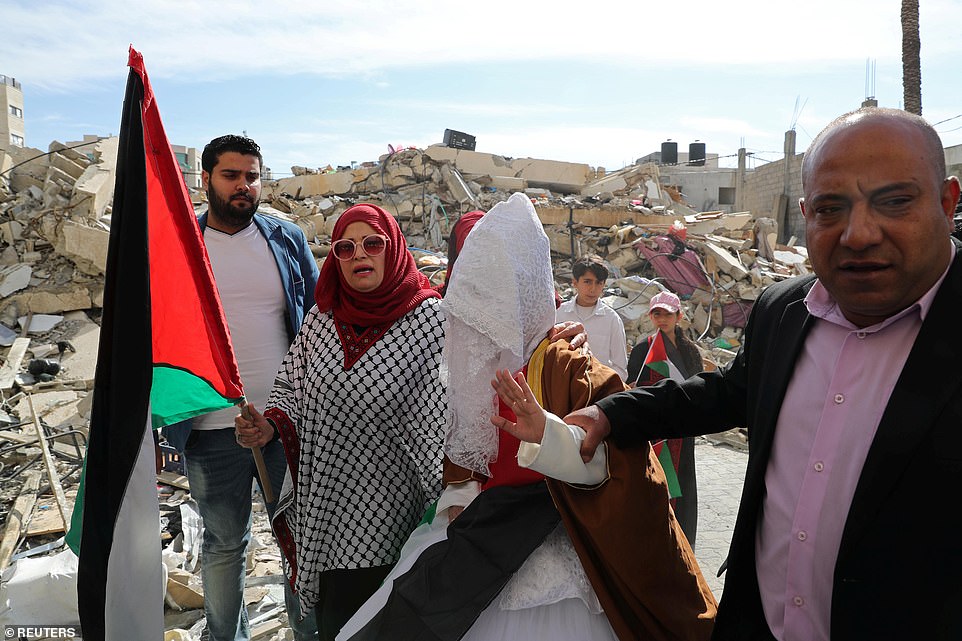 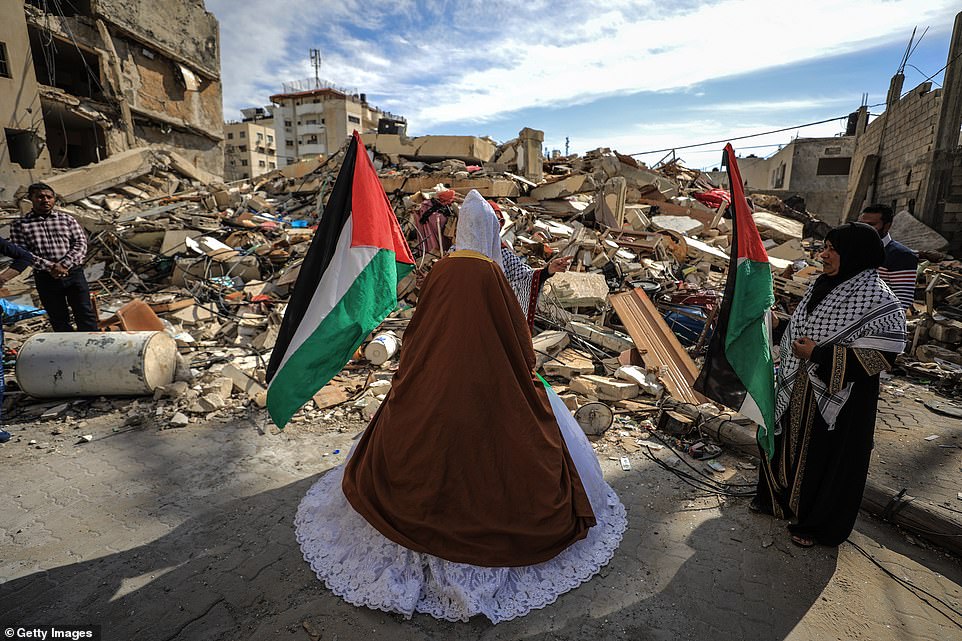 Al-Huwaity holds up the flag of Palestine as she looks at her family’s bombed house. Another woman also holds up a flag as she watches on