This incredible x-ray image shows a fully-grown rat inside a snake’s stomach after the reptile devoured its final meal.

The water python was admitted to  last week in Palmertson, Darwin, after it was discovered in the middle of a road by a government wildlife ranger.

The animal was believed to have been ill and its movement restricted when it was hit by a car.

Vets were unable to save the snake, but the x-ray image was considered ‘fascinating’ by staff. 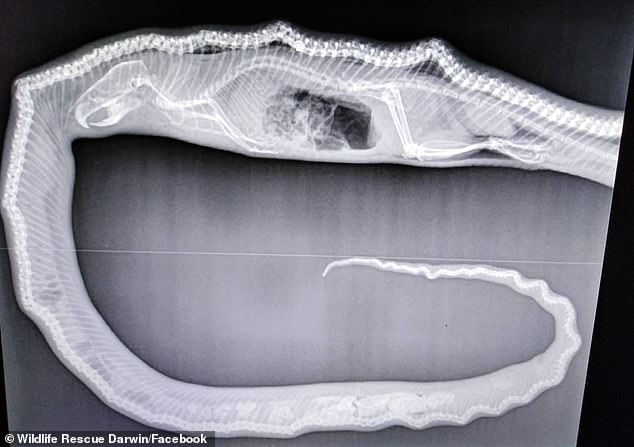 The image showed the snake had suffered multiple breaks to its spine – as well its enormous last meal.

Ark Aid’s Vice President Andrea Ruske told Yahoo News the snake had not only eaten the rat whole, but that it also had deformed bones.

‘We can only assume this was one of the reasons why it might have been slower to cross the road,’ she said.

Ms Ruske said the wildlife hospital frequently saw a lot of snakes delivered to the clinic with similar injuries from vehicles or dog attacks.

She advised motorists should take care on the roads to protect the native wildlife outlining that the most prevalent times to be cautious of wildlife is at dusk and dawn. 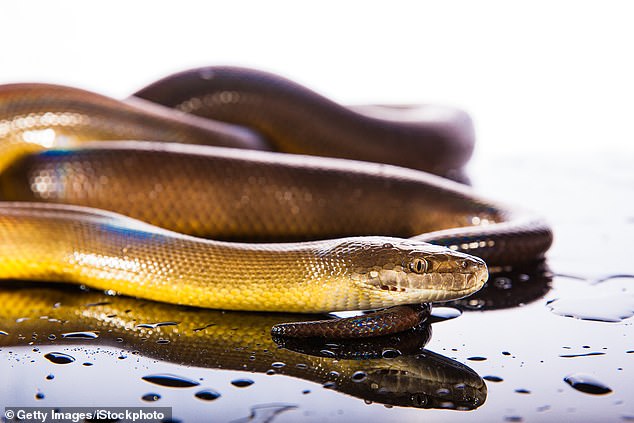 ‘Slowing down when you are on the road will not only save lives but it is also safer for the driver,’ she said.

Ms Ruske also insists that there is a duty of care for drivers to check on and report injured animals to local wildlife rescues.

‘It only takes one phone call. It is not ethical to let an animal suffer,’ Ms Ruske said.

The Ark Aid clinic warned injured animals are very susceptible to stress and that untrained and non-vaccinated people should not attempt to rescue bats, sea turtles, snakes, birds of prey and fully grown wallabies.

Tekashi 6ix9ine going through three years in jail for 2015 intercourse video
The Super Bowl WAGS descend on the Mercedes-Benz Stadium
Michelle Obama reflects upon the Notre Dame Cathedral fire
Jenelle Evans and David Eason go to child custody case with what appears to be a gun on dashboard
Woman found dead after dialing 911 to report man carrying a sledgehammer
Maxim swimsuit model says work dried up after she backed Trump and became face of 'Jexodus' movement
NASA says three asteroids will make a 'close approach' to Earth tonight
Shocking images of crowds on the sand in Clearwater Beach, Florida, ignoring coronavirus warnings