A 65-year-old shopkeeper with a heart condition was knocked to the floor by thugs and robbed of four bottles of wine worth £18 in an attack last night.

The theft was captured on CCTV footage at Waz’s store in Broxburn, West Lothian, and posted to social media in a bid to catch the culprits.

In the footage, elderly Abbas Khan picks up a mop stick to defend himself but is no match for the three louts who put him in a headlock before stealing the Buckfast bottles. 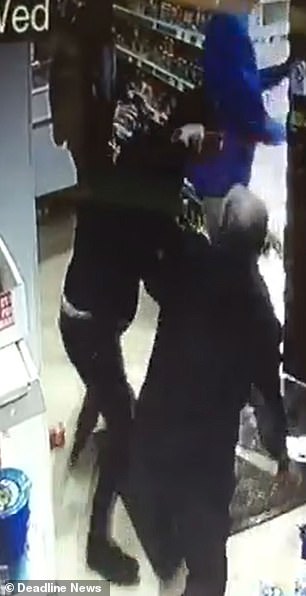 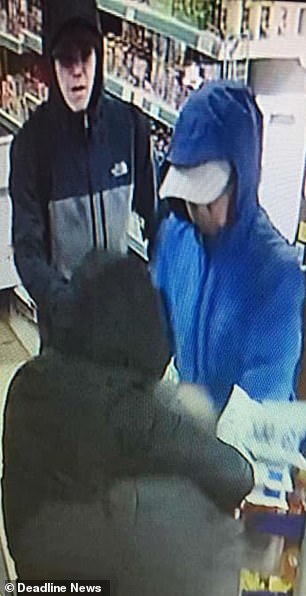 This is the shocking moment  65-year-old shopkeeper Abbas Khan is pulled to the floor by thugs who got away with four bottles of Buckfast worth £18 at Waz’s Convenience store, in Broxburn, West Lothian, last night

Images from the video of the attack were posted on Facebook by Mr Khan’s son Waz Abbas, 40, shortly after the attack last night.

The footage starts with one thug, wearing a blue jacket, standing in the shop as Mr Khan sits behind the counter.

As the thug paces around the shop, Abbas stands up to watch him more closely and the man is soon joined by two accomplices.

The thug in blue puts on a pair of gloves while the others look around.

He confronts the shopkeeper and the pair appear to have a discussion which leads to Mr Abbas picking up a mop stick to defend himself.

When he then picks up the phone and starts dialing, one of the thugs – dressed in black – moves forwards and grabs the pensioner. 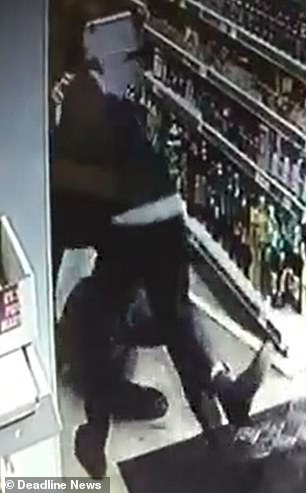 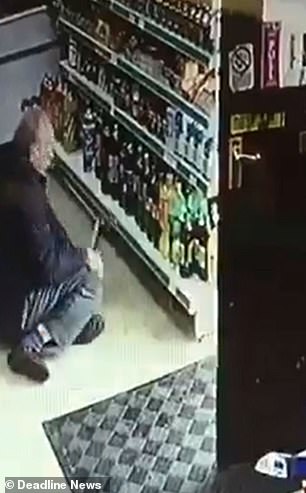 As the tussle continues on the floor, the two other thugs make their escape, with one of them picking up four bottles of Buckfast, a fortified wine containing caffeine

He tries to hit back with the stick but is pulled forwards and onto the floor.

While he grapples with his attacker, the blue-coated thug quickly leaves the shop, while the third moves towards the till behind the counter.

However, he seems to quickly give up any hope of getting money and the group instead get away with the four bottles of Buckfast, which is a caffeinated wine.

The clip ends with the gang leaving the scene and Mr Khan getting back to his feet.

Afterwards, Waz Abbas wrote in a Facebook post: ‘These f****** scumbags just jumped my Dad for Buckfast at Wilson Terrace.

Speaking today, Waz said: ‘My dad is okay but he’s got slightly bruised ribs and was shaken. Not good for a man with a heart condition.

‘They came in and got four bottles of Buckfast but God knows what else they were looking for.’ 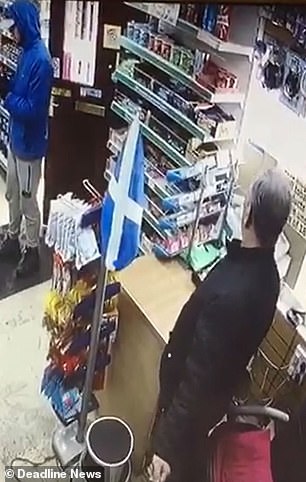 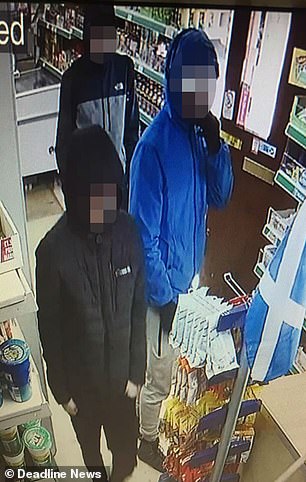 The footage starts with one thug, dressed in a blue coat, pacing around the shop. His two companions then join him and Mr Khan appears to get suspicious after a conversation with them. He picks up a mop handle and is then attacked when he picks up the phone 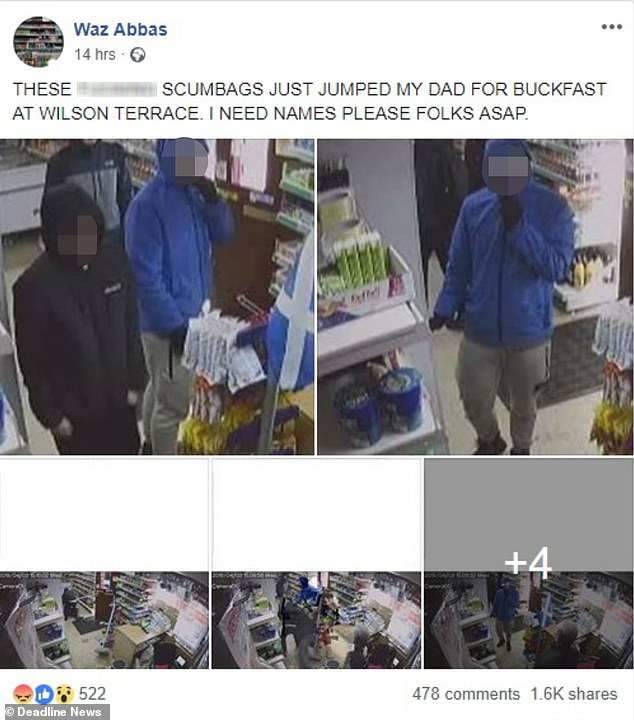 Mr Khan’s son, Waz Abbas, 40, posted images from the video on Facebook. In an emotional message, he wrote: ‘These f****** scumbags just jumped my Dad for Buckfast at Wilson Terrace. I need names please folks ASAP’

The shop owner revealed that there was another thug not caught on camera in the shop.

‘There was three in the shop and one outside keeping look out. My dad suspected they were up to something and I think he tried to ring the police when they attacked him.

‘It’s the first time in 20 years something like this has happened. We’ve had the odd chocolate bar nicked by school kids but that’s it.

He said the response to his appeal from the community has been ‘phenomenal’.

A spokeswoman for Police Scotland said: ‘As a result of inquiries by Livingston CID, supported by various members of the local community, three 16-year-old males and a 17-year-old male were all reported and two of the 16-year-olds are appearing at Livingston Sheriff Court on Thursday 4th April.’

The Strolling Useless's Lauren Cohan drops a cryptic trace about her future on the present
Shock for beach-goer after finding used syringe on the sand at Bondi Beach
'Bully, 16, who attacked Syrian refugee' has fled the country with his mother
Wills and Kate release a family photo for their greeting card
Three hundred babies a DAY are killed in conflict before they turn one
Sheffield, Leeds and Plymouth host Britain’s tightest tippers but people in Belfast are generous
Hospital apologises after transgender woman dressed as Mrs Claus is mistaken for a man
British men just adore a French accent (but women prefer listening to an Italian!)