Caitlyn Caruso, 22, said she met Biden at an event devoted to sexual assault at the University of Nevada at , where she studied as an undergrad.

Caruso, who was 19 years old at the time, said that Biden placed his hand on her thigh while she squirmed in her seat to show how uncomfortable she was, according to .

She said Biden then gave her a hug and held it ‘just a little bit too long.’

Caruso told the Times that she was startled at Biden’s behavior because she had just told the audience of her own experience as a sexual assault survivor. 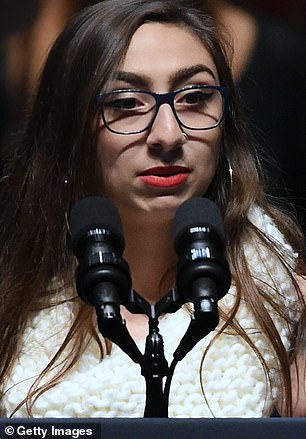 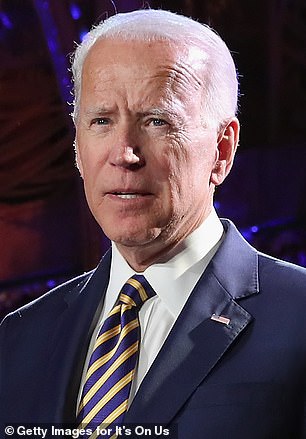 Caitlyn Caruso (left), a survivor of sexual assault, says Joe Biden (right) placed his hand on her thigh and hugged her ‘just a little bit too long’ at an event at the University of Nevada at Las Vegas on April 7, 2016 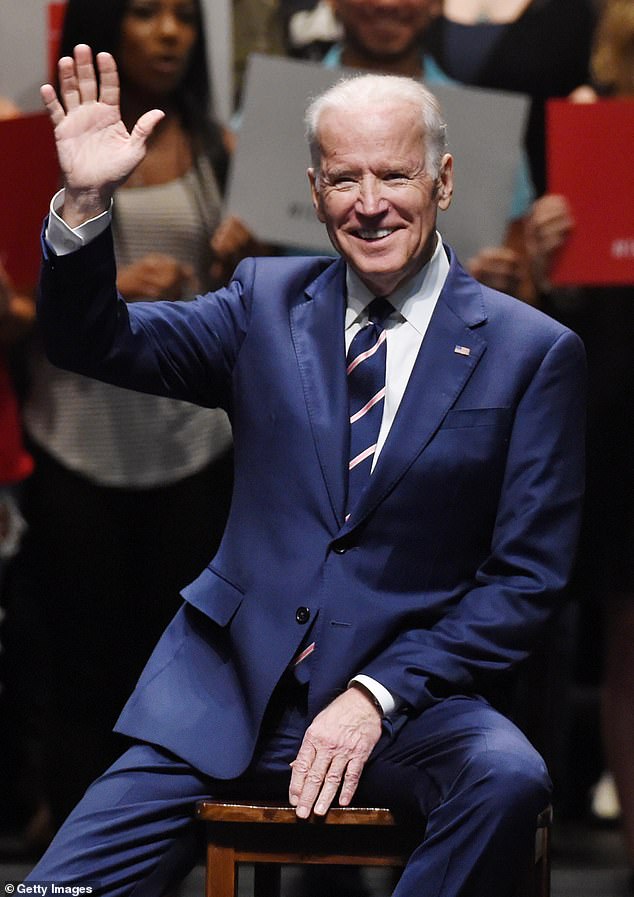 Biden was a guest at the university, which hosted the event to discuss sexual assault 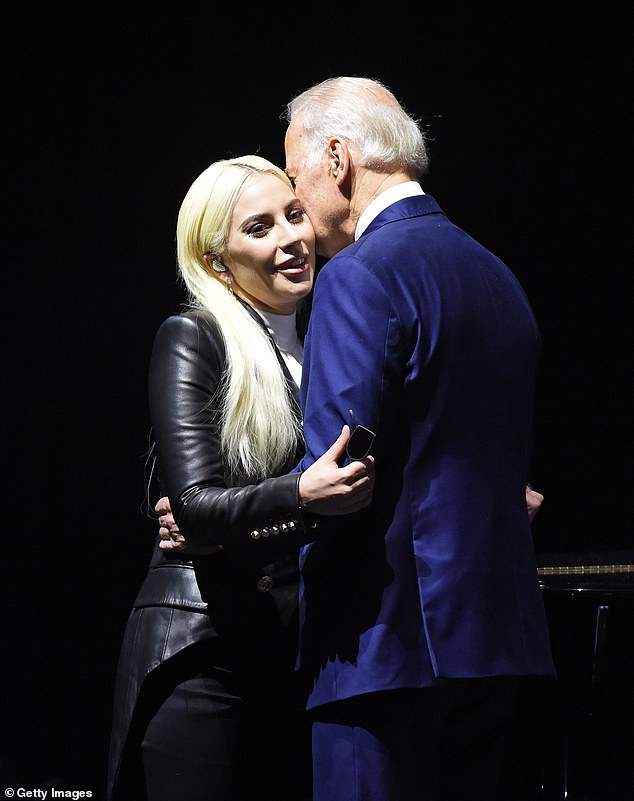 Lady Gaga performed at that same event. She is seen above getting a kiss on the cheek from the then-vice president

She said she was also mindful of the fact that Biden was one of the authors of the 1994 Violence Against Women Act.

‘It doesn’t even really cross your mind that such a person would dare perpetuate harm like that,’ she said. ‘These are supposed to be people you can trust.’

The event at UNLV was also attended by pop star Lady Gaga, who is seen on stage embracing Biden.

The then-vice president also leans in to give Gaga a kiss on the cheek.

The other alleged incident of inappropriate touching took place at a fundraiser in Minneapolis in 2012.

It was there that Biden met D.J. Hill, 59, a writer who attended the event with her husband.

At one point during the evening, Hill and her husband were posing with Biden for a photograph.

According to Hill, Biden put his hand on her shoulder and then began to run it down her back.

She told the Times that this made her ‘very uncomfortable.’

Hill said that her husband noticed Biden’s hand caressing his wife’s back. He then put his hand on Biden’s shoulder and told a joke so as to break up the moment. 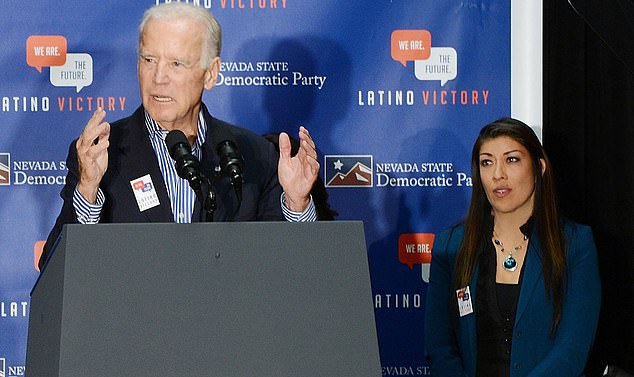 Hill told the Times that she did not complain at the time. She says she does not know what Biden’s intentions were or whether he was even aware of what he was doing.

‘Only he knows his intent,’ Hill said, adding that times have changed to the point where ‘if something makes you feel uncomfortable, you have to feel able to say it.’

In total, four women have now gone public with claims that Biden’s physical behavior with them made them uncomfortable.

The fresh claims will likely provide more fuel to those who say that the 76-year-old Democrat should abandon plans to run for president given the changing attitudes toward the treatment of women.

Amy Lappos, a former aide to Democratic Rep. Jim Himes of Connecticut, said Monday that Biden touched her face with both hands and rubbed noses in 2009.

Former Nevada politician Lucy Flores penned a magazine essay last week in which she wrote that Biden kissed her on the back of the head in 2014.

Lappos told The Associated Press that she and other Himes aides were helping out at a fundraiser in a private home in Hartford, Connecticut, in October 2009 when Biden entered the kitchen to thank the group for pitching in.

“After he finished speaking, he stopped to talk to us about how important a congressional staff is, which I thought was awesome,” Lappos said.

She said she was stunned as Biden moved toward her.

‘He wrapped both his hands around my face and pulled me in,’ said Lappos, who is now 43.

Biden said nothing, she said, then moved off.

She said the experience left her feeling ‘weird and uncomfortable’ and was ‘absolutely disrespectful of my personal boundaries.’ 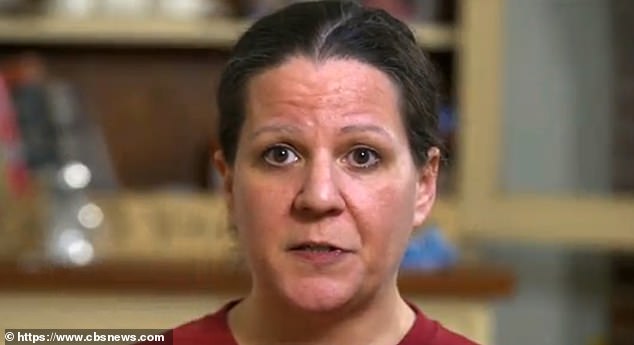 Amy Lappos (above), a Greenwich, Connecticut woman, says Biden ‘rubbed noses’ with her at a 2009 fundraiser for Democratic Congressman Jim Himes

Russo, Biden’s spokesman, didn’t directly respond to Lappos, instead referring to a Sunday statement in which Biden said he doesn’t believe he has acted inappropriately during his long public life.

The former vice president said in that statement: ‘We have arrived at an important time when women feel they can and should relate their experiences, and men should pay attention. And I will.’

Biden hasn’t made a final decision on whether to run for the White House.

But aides who weren’t authorized to discuss internal conversations and spoke on the condition of anonymity said there were no signs that his team was slowing its preparations for a campaign.

Asked on Monday by the AP about the accusations against Biden, House Speaker Nancy Pelosi said, ‘I don’t think that this disqualifies him from running for president, not at all.’

Biden’s potential Democratic rivals haven’t rushed to back him up.

Sen. Kamala Harris of California said Tuesday that she believed his accusers but that it’s up to Biden to decide whether to run.

Over the weekend, presidential candidate Elizabeth Warren said Biden ‘needs to give an answer’ about what occurred.

Another 2020 hopeful, Kirsten Gillibrand, said, ‘If Vice President Biden becomes a candidate, this is a topic he’ll have to engage on further.’

Ultraviolet, a women’s advocacy group, tweeted: ‘Joe Biden cannot paint himself as a champion of women and then refuse to listen and learn from a woman who says his actions demeaned her. Good intentions don’t matter if the actions are inappropriate. Do better, Joe. And thank you @LucyFlores for coming forward.’

A number of high-profile females from the world of politics and media who know the former vice president defended him.

Mika Brzezinski of MSNBC’s Morning Joe said on the air Tuesday:  ‘I think the next time I see Joe Biden and he doesn’t hug me, and give me a kiss and hold my hand while we’re talking to you, that’s the new Joe Biden, and that’s not the Joe Biden I knew. 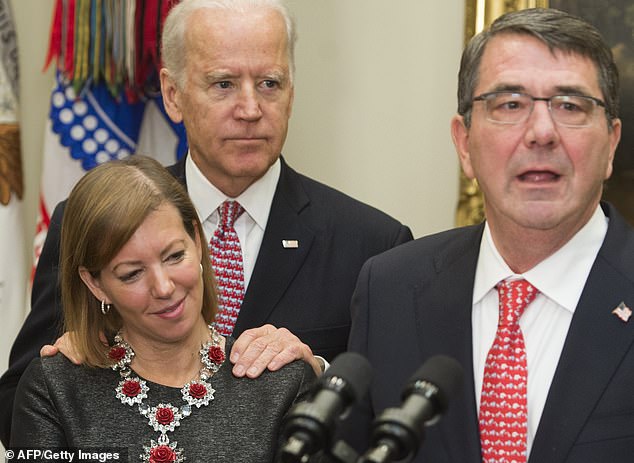 She then took things a step further by suggesting an attack on Biden could be akin to a vote for President Trump.

Stephanie Carter, the wife of Obama-era Defense Secretary Ash Carter, was photographed with Biden placing his hands on both her shoulders and whispered something in her ear during her husband’s swearing-in ceremony in 2015.

A screenshot of the moment was tweeted at the time but Carter said the photo is ‘misleading’ and that it was just a ‘moment between close friends’.

Carter even apologized to Biden and his wife, Jill, when she saw them after the furor in February 2015.

According to Carter, Biden’s physical touching was a ‘means of offering his support’ as she was ‘uncharacteristically nervous’ during her husband’s swearing-in ceremony.

In her own article on the incident titled ‘The #MeToo Story That Wasn’t Me’ published by , Carter said she thought the situation would go away, but adding that was ‘wishful thinking’.

She described how she had slipped ice earlier in the day during a ceremony at Arlington Cemetery and was ‘uncharacteristically nervous’. 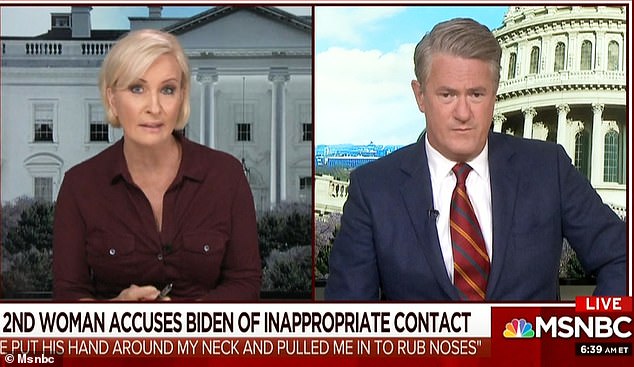 Thoughts: ‘I think the next time I see Joe Biden and he doesn’t hug me, and give me a kiss and hold my hand… that’s the new Joe Biden,’ said Mika Brzezinski (above on Tuesday) 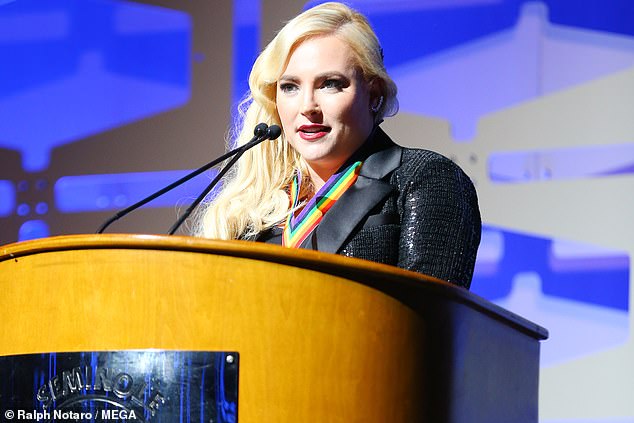 Meghan McCain has defended Joe Biden after the former Vice President was hit by claims that he inappropriately touched women (pictured on March 30, 2019)

The View host called the rumored 2020 hopeful ‘one of the truly decent and compassionate men in all of American politics.’

Biden then gave her a hug, telling her ‘thank you for letting him [her husband] do this’ and put his hands on her shoulders as a ‘means of offering his support’, she said.

Meghan McCain also defended Biden. The View host called the rumored 2020 hopeful ‘one of the truly decent and compassionate men in all of American politics.’

She explained that the politician had been there for her when her father, the late Arizona Sen. John McCain died in August of brain cancer, as his son suffered the same diagnosis before his death in 2015 aged 46.

Taking to Twitter she said: ‘He has helped me through my father’s diagnosis, treatment and ultimate passing more than anyone of my father’s friends combined.

‘I wish there was more empathy from our politicians not less.’