shared a couple of pictures showing her seemingly enjoying nature from atop a Joshua Tree.

And it didn’t take long for people to join into the conversation and create a major nature firestorm.

While some people took to comments section to praise the ‘beautiful’ photos, many others bashed the pop susperstar for not respecting the ongoing effort to protect the iconic yucca trees. 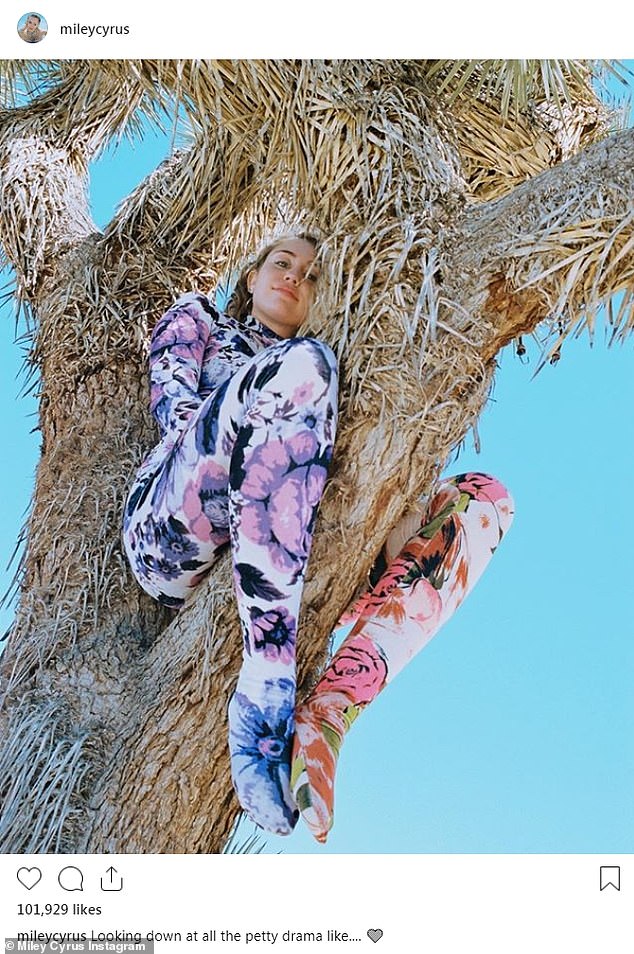 Nature calling: Miley Cyrus has faced major backlash after posting Instagram photos of her sitting in the protected Joshua tree

The first photo, posted early Monday morning, showed the singer looking down from the confides of the yucca tree, dressed in a skin-tight floral bodysuit.

‘Looking down at all the pretty drama,’ Cyrus wrote in the caption.

The critical comments rolled in fast and furious.

But still, some eight hours later, she followed it up with a similar snap on the tree that was captioned: ‘Monkey Bizzzzznassssss.’ 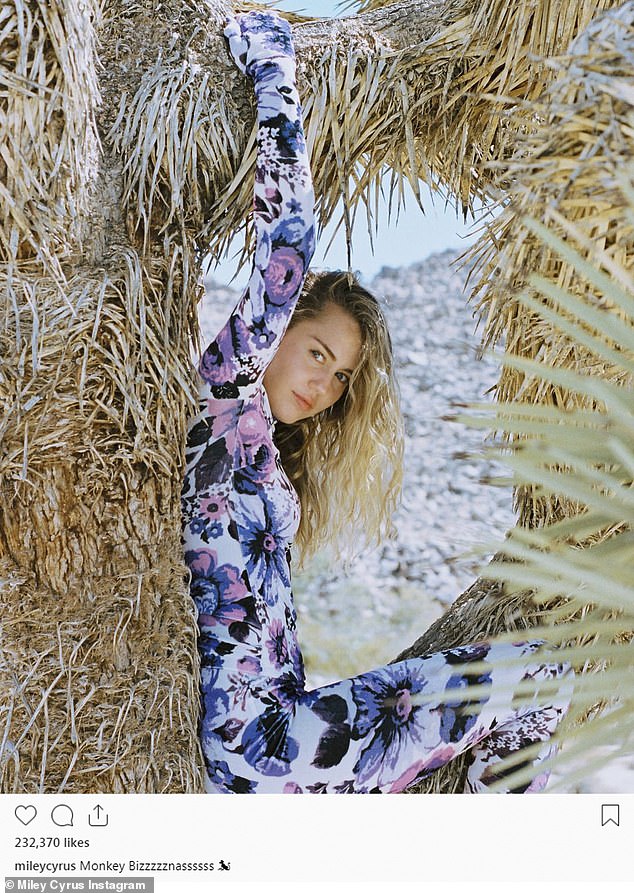 Stylin’: The singer wore a skin-tight floral bodysuit in the series of snaps 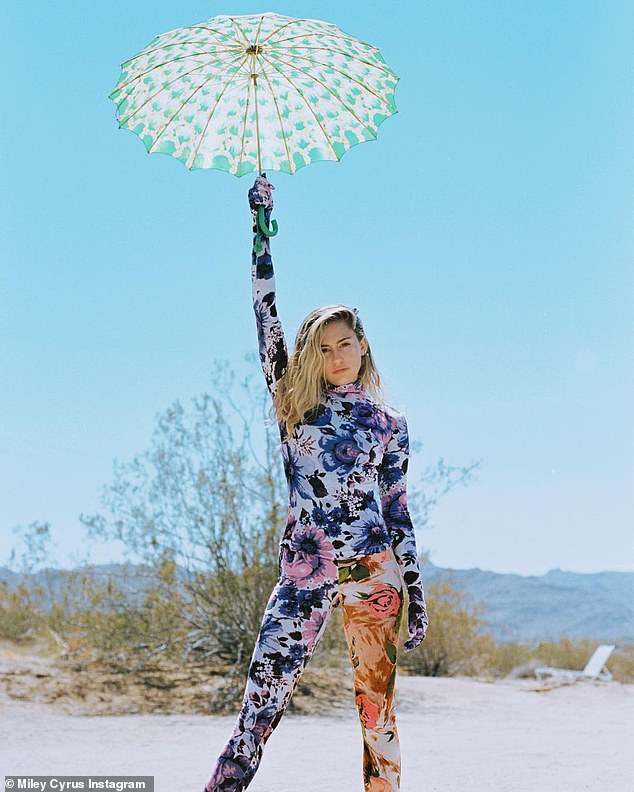 Social media butterfly: Cyrus has been sharing a series of photos over the last couple of weeks that appears to show her near the windmills in Palm Springs 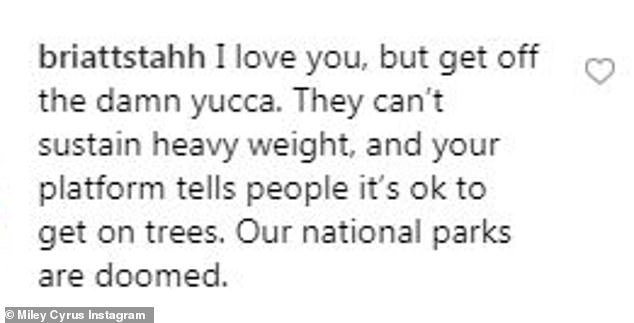 Take notice: Some people expressed their admiration of the singer when trying to educate her about the protected yucca trees

Among the slew of critical posts: briattstahh wrote, ‘I love you, but get off the damn yucca. They can’t sustain heavy weight, and your platform tells people it’s ok to get on trees. Our national parks are doomed.

Someone who goes by rachhamby was one of many people who pointed to Cyrus’s huge platform as a star.

‘Do not climb Joshua trees. It is incredibly damaging to them. As a public figure it is your responsibility to set a good example to your followers so we can preserve these trees for generations to come.’

beefcheef wrote: ‘Don’t do this. Joshua trees are dying out because of their fragility, and folks climbing on them isn’t helping curb that. Delete this before more damage is done.’ 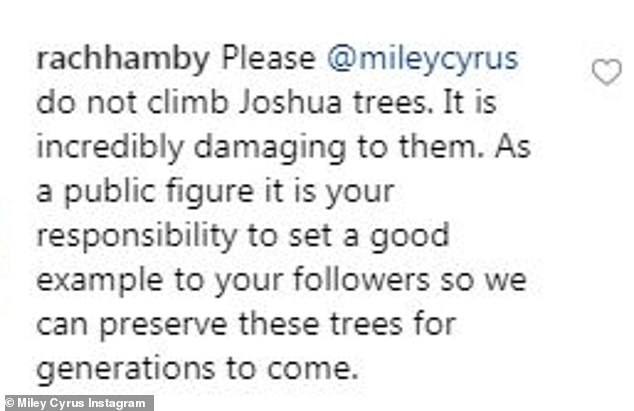 Role model: A number of people pointed to her platform as a celebrity when making their point 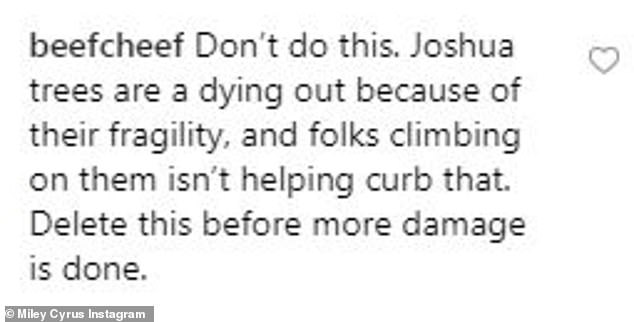 Do the right thing: Many people asked the 26-year old star to remove the photos

Another person named daaaaazzedadded said, ‘Miley you’re amazing but, don’t climb on Joshua trees ! They aren’t a normal tree, they can’t handle the weight it hurts them. They want to be admired not climbed on !’

Peachy_chichi wrote: ‘Hi love, Mom here to ruin the party but these babies are fragile and disappearing naturally so please try not to mount them, just hug em. Thanks, Queeeeeeen!’

Many more comments echoed these concerns. 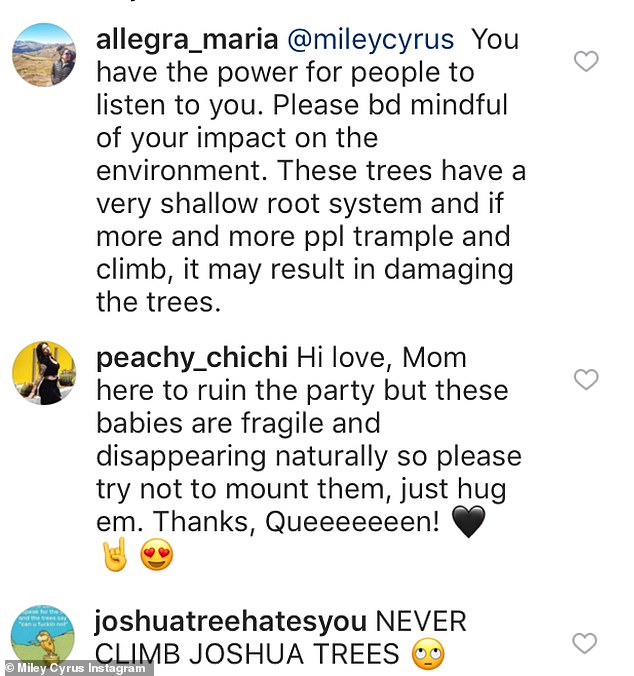 Peachy_chichi wrote: ‘Hi love, Mom here to ruin the party but these babies are fragile and disappearing naturally so please try not to mount them, just hug em. Thanks, Queeeeeeen!’

Cyrus has been sharing a series of photos over the last couple of weeks that appears to show her near the windmills in Palm Springs, according to .

In a statement from the Mojave Desert Land Trust, Executive Director Geary Hund said Joshua trees have a shallow root system and that any additional weight can damage branches.

‘We ask that Miley Cyrus consider her status as a public figure and remove this photo from her social media accounts in order to educate others and to prevent potential damage to Joshua trees,’ Hund wrote.

The trees and protected in Joshua Tree National Park, Mojave National Preserve and in several city and county ordinances in the region.

CBS interim chairman steps down due to 'unanticipated complications' with rare form of blood cancer
'Why would they want to break up this family?'
Tigers are orange to confuse their prey who see them as green, experts say
Todd Chrisley 'tried to extort' his own daughter over sex tape
Terminally ill veteran granted wish of making one last snow angel
Simone Biles slams USA Gymnastics when they wish her happy birthday
IRS insists there are no problems with checks as Americans claim they are sent to the wrong accounts
ISIS chief once tipped to replace Baghdadi is captured in raid by Iraqi special forces