Massachusetts health officials have confirmed the state’s first measles case this year as the outbreak continues to spread across the US.

The patient, who has not been identified, was diagnosed with the infectious disease on Sunday and may have exposed others in the greater Boston area, according to a from the Massachusetts Department of Public Health.

During the infectious period, the person visited several locations including a Starbucks, a Staples, a Whole Foods and a Target.

This brings the total number of states where cases have been confirmed up to 16, and public health experts fear the number could rise even further. 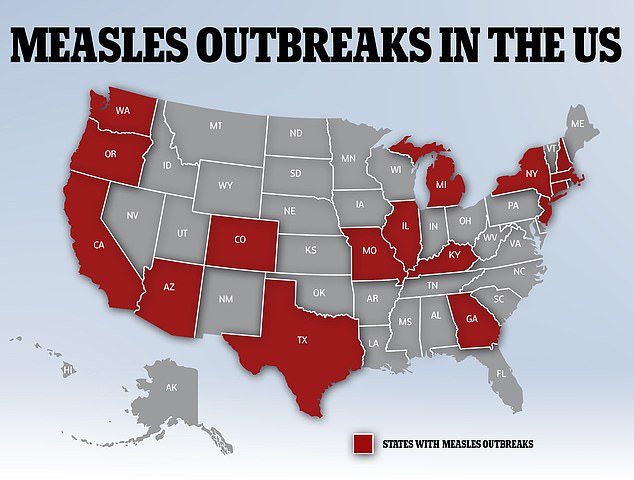 The first case of measles in Massachusetts was confirmed in the greater Boston area, bringing the total number of states implicated in the nationwide outbreak up to 16

‘The measles virus is currently causing large national and international outbreaks of measles and a lack of vaccination, combined with domestic and international travel, has resulted in the spread of illness,’ said Dr Catherine Brown, the state’s epidemiologist, in a statement.

‘Getting vaccinated is the best way to protect yourself from this disease.’

It is unclear if the infected patient was vaccinated, and the Massachusetts Department of Public Health did not immediately return DailyMail.com’s request for comment.

On Monday, the Centers for Disease Control and Prevention (CDC) reported that 387 cases have been confirmed this year, surpassing the count for all of 2018, which was 372.

The 2019 tally is the second-highest since measles was considered to be eradicated in 2000, putting this year on track to beat the record-high of 667 cases in 2014.

The highly infectious disease has been spreading among people who are unvaccinated or live in states that allow non-medical exemptions for vaccines.

WHAT ARE THE POSSIBLE COMPLICATIONS OF MEASLES?

Most people will recover from measles within one or two weeks, but sometimes complications can develop.

People most at risk include teenagers and adults, babies younger than age one and children with weakened immune systems.

Common complications include diarrhea and vomiting, middle-ear or eye infections, laryngitis, fits caused by a fever, and lung infections such as pneumonia, bronchitis and croup.

About one in every 15 infected children will develop one of these.

Rare complications include serious eye disorders which can lead to vision loss, heart and nervous system problems, and a fatal brain infection called subacute sclerosing panencephalitis – this is very rare and only happens in one in every 25,000 cases.

Having measles during pregnancy increases the risk of the baby having a low birth weight, premature birth, or stillbirth or miscarriage.

Washington and New York, particularly, have been struggling to contain the disease.

In January, Washington declared a public health emergency after a measles outbreak that has affected 73 people in Clark County and one in King County, where Seattle is.

Meanwhile, in New York, there have been at least 420 confirmed cases in Brooklyn, Queens and Rockland County since October 2018 – all in Orthodox Jewish communities.

Measles is a highly contagious infection caused by the measles virus.

When someone with measles coughs, sneezes or talks, infected droplets are sprayed into the air, where other people can inhale them and are then infected.

Symptoms present themselves between 10 to 14 days after infection and include fever, cough, runny nose and a total-body skin rash.

For most, measles is not life-threatening. However, in some cases, people can suffer from serious complications including pneumonia and brain swelling.

Once common, the disease is now rare since the MMR vaccine was introduced in 1963.

The CDC recommends children receive the first dose at 12 to 15 months old and the second dose at four to six years old.

The vaccine is about 97 percent effective. But those who are unvaccinated have a 90 percent chance of catching measles if they breathe the virus in, according to the CDC.

A report published by the World Health Organization (WHO) in January said measles has seen a 30 percent increase in cases around the world.

WHO also revealed that nearly 83,000 people contracted measles in Europe in 2018, the highest number in a decade.