Passengers have been left furious after at least 24 UK flights were cancelled by Flybe, affecting more than 2,000 passengers.

The airline has cancelled at least five flights from Belfast City Airport, four from  and one from East Midlands.

Services in and out of Leeds Bradford, Aberdeen, Cardiff, London Southend and Southampton are also being affected.

The struggling airline is also in job loss talks, with passengers boarding planes at Cardiff Airport claiming staff told them they are being ‘made redundant in October’.

The airline, who was bought up in December 2018 after running up £20million losses the previous year, is blaming staff shortages, the end of staff’s annual leave year and the busy Easter period for today’s travel chaos. 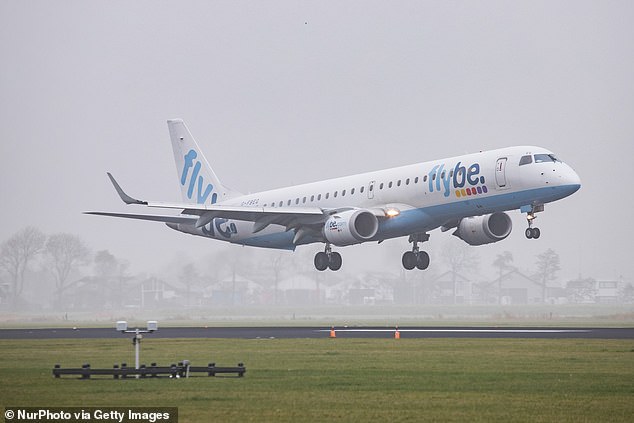 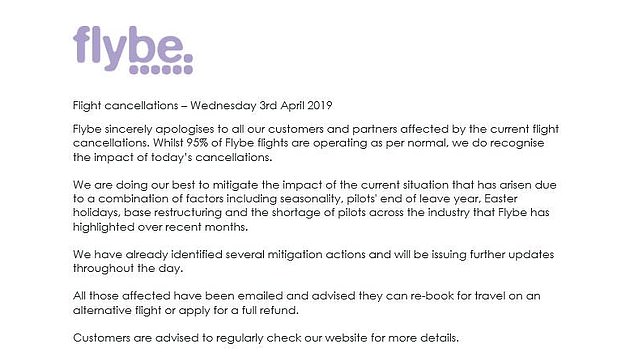 A Flybe statement blames staff shortages, the end of the staff annual leave year and the upcoming Easter holidays for today’s cancellations

Only routes within the UK are being affected, but the company was unable to confirm exactly how many when asked by MailOnline.

Flybe staff at Cardiff Airport, where the airline runs the most flights out of all of its UK bases, have been told there are at least 100 of their jobs at risk with the possibility of the airline ceasing all operations there in October.

Pilots’ union Balpa claims Flybe is closing its Cardiff and Doncaster Sheffield bases, with services also scaled back in Exeter.

Passengers boarding Flybe planes in Cardiff this morning claimed cabin crew told them they were ‘being made redundant’ in October.

On Sunday an inaugural Flybe route from Newquay to Heathrow was cancelled and passengers were forced to get on a bus instead.

Bizarre images showed air stewards walking down the aisle of a coach – instead of a plane.

Angry passengers took to Twitter this morning to complain they had been left stranded with no information about their journey. 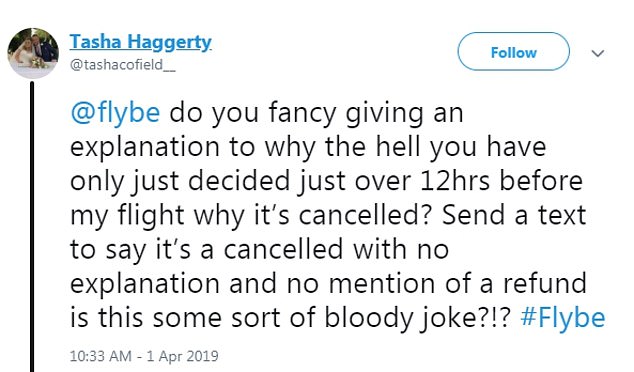 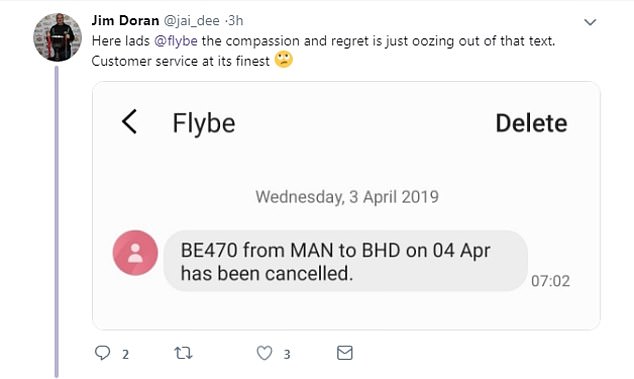 Passengers received texts and emails yesterday evening informing them their flights would be cancelled today.

Sue Piercey, from Bradford, told her flight from Leeds to Belfast was cancelled today.

She said: ‘We received a curt email at 19:00 last night followed by an even shorter text message. No other flight options were offered.’

‘Our holiday is totally off now, and I hope my insurance company can help me.

One person wrote on Twitter: ‘Flybe if you cancel my flight today from Belfast to London City and I miss the first Spurs game in the new stadium… I don’t know what I’ll do but I’ll be very angry.’ 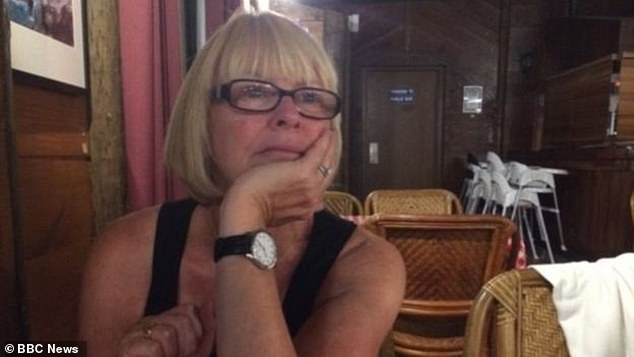 Sue Piercey, from Bradford, told BBC News her flight from Leeds to Belfast was cancelled today

Another wrote: ‘I’m concerned to see you’re cancelling flights. I’m due to fly from Edinburgh to Cardiff next week on Wednesday. Is there any risk that this may be cancelled? Should I book with an alternative company?’

Someone else tweeted: ‘Flybe why the flight cancellations? Is this going to happen again?

The disruption follows the launch of the airline’s summer schedule, but officials have not confirmed if the two are linked.

Flybe was bought by the Connect Airways consortium, which includes Virgin Atlantic, in December 2018 after running up huge losses.

It got into financial difficulty in 2017 after an ‘aggressive expansion’, with one pilot struck off after accusing bosses of ‘ruining a profitable airline’.

The senior pilot wrote in an open letter: ‘Congratulations, in two years at Flybe you and your fellow incompetent cohorts have managed to totally destroy a viable airline which was making profits when you took over.’ 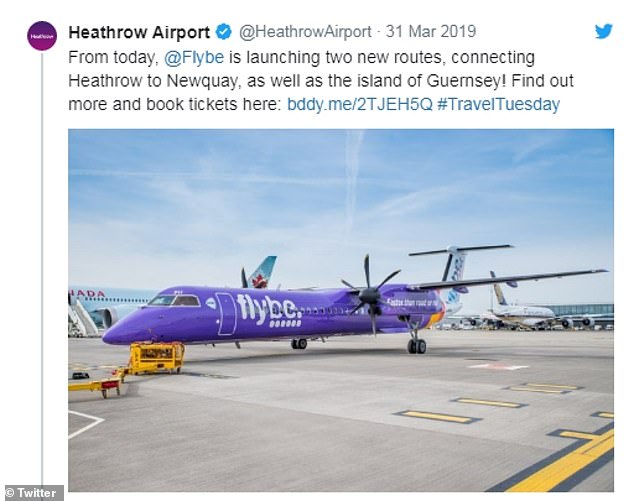 A Flybe spokesman said in a statement today: ‘Flybe sincerely apologises to all our customers and partners affected by the current flight cancellations.

‘Whilst 95 per cent of Flybe flights are operating as per normal, we do recognise the impact of today’s cancellations.

‘We are doing our best to mitigate the impact of the current situation that has arisen due to a combination of factors including seasonality, pilots’ end of leave year, Easter holidays, base restructuring and the shortage of pilots across the industry that Flybe has highlighted over recent months.

‘We have already identified several mitigation actions and will be issuing further updates throughout the day.

‘All those affected have been emailed and advised they can re-book for travel on an alternative flight or apply for a full refund.’ 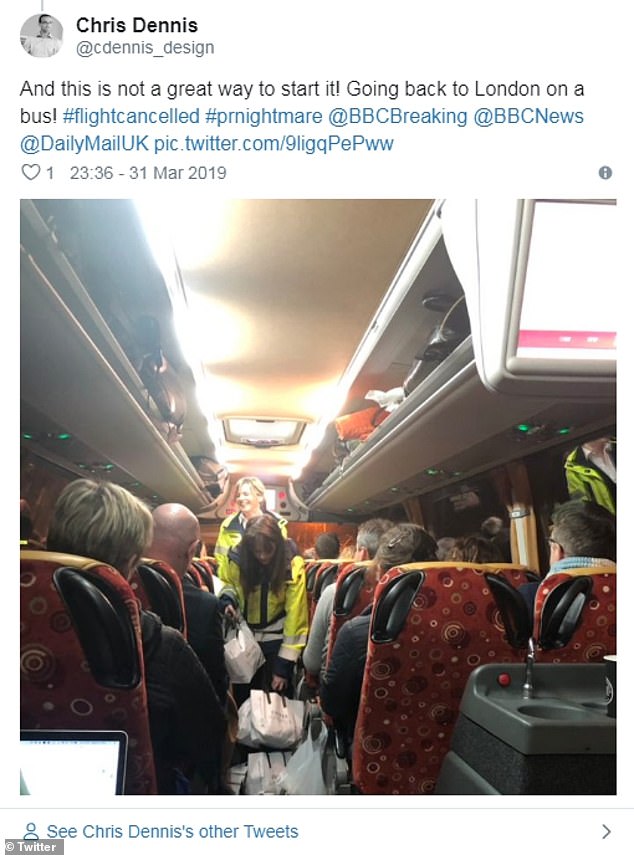 The 6.40pm service from Newquay to Heathrow could not take-off on Sunday because of a ‘technical issue’ which saw some passengers miss a day of work and forced others to spend more money on extra accommodation

How Glasgow lost its tag as Britain's knife crime capital
Liverpool fans clamber on cars, straddle traffic lights and scale buses after Champions League win
Mother became pregnant after doctors warned chemotherapy could leave her infertile
Sir Jim Ratcliffe sparks new row with neighbours over plans for cottage in the New Forest
Fears of British casualties at Iraqi bases bombed by Iran as UK accused of being 'partner in crime'
Royal biographer ANGELA LEVIN on her fears that Meghan has put a sliver of ice in his heart
Volunteers sew masks in their homes in bid to help healthcare workers facing huge shortages
Kate Garraway joins the nation in clapping for carers amid lockdown