rebels are set to make a third fresh attempt to wrestle control away from the Government tomorrow despite Monday night’s disaster in the Commons.

MPs failed for a second time to make their minds up on a way out of the impasse as the bitterly divided political parties could not find a majority for any of four options they had themselves come up with.

The results were a severe blow for de-facto backbench leader Sir Oliver Letwin, who led the charge to circumvent the Prime Minister and hold the so-called indicative votes.

What power there is in a bitterly divided Westminster seems to be moving back towards the Prime Minister and her Government, who will meet for a marathon five hours of Cabinet today to determine its next moves.

But former Cabinet minister Sir Oliver will tomorrow make a third attempt to discover if the seemingly entrenched MPs on all sides of Brexit are prepared to go over the top in search of a compromise.

What actually happens will depend on what is likely to be a fraught day of horse trading by MPs as they attempt to build consensus.

Expectations that a third round of indicative votes will come up with any viable plan, so divided are MPs.

What is decided – if anything – could determine whether the Prime Minister brings back her meaningful vote for a fourth attempt this week.

It is thought she could seek a straight vote on her deal if MPs remain deadlocked, or seek to run it off against any rival plan – like a customs union – if the Commons manages to present a united front. 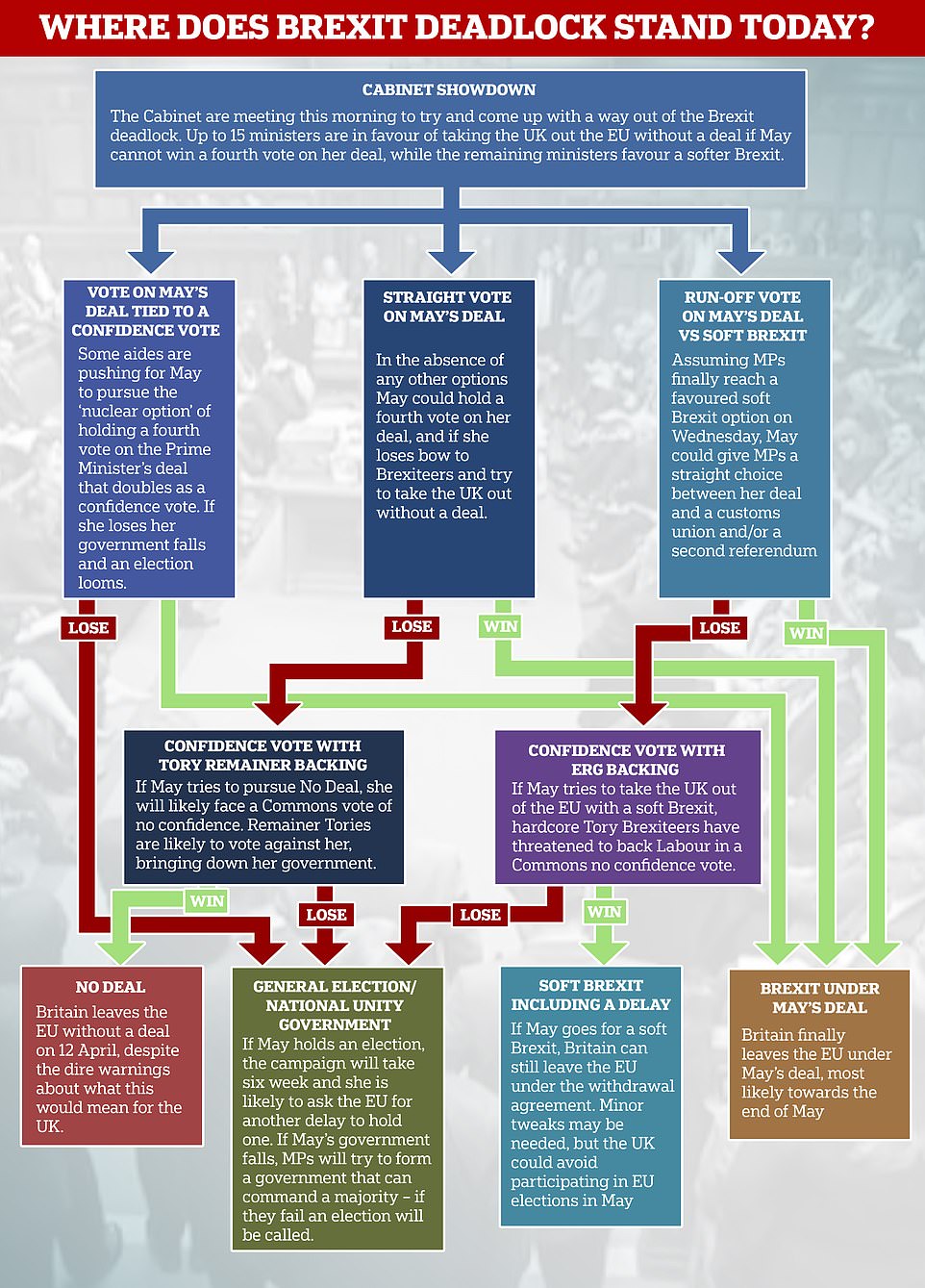 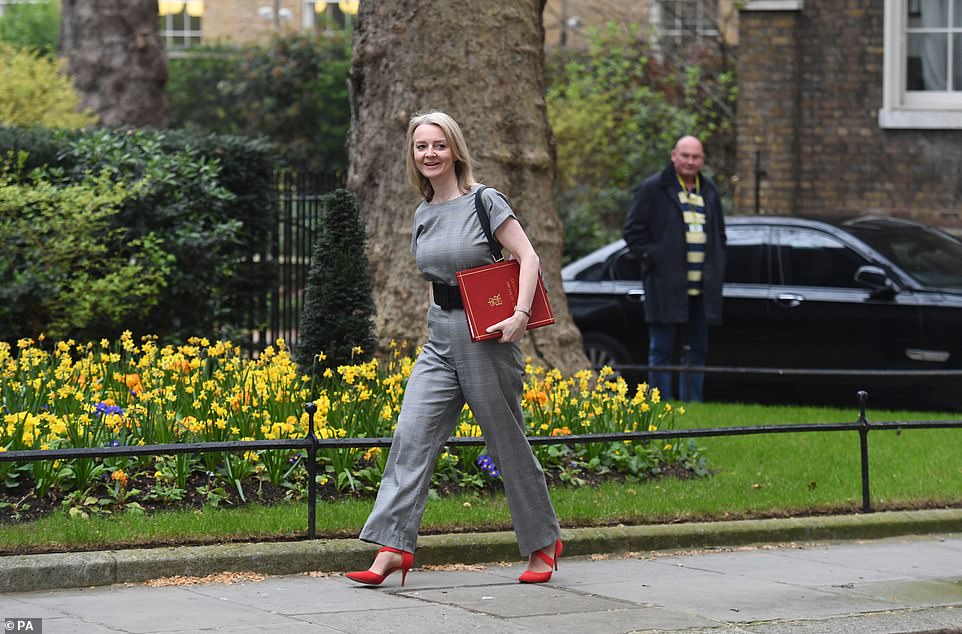 Chief Secretary to the Treasury and leadership ousider Liz Truss arriving in Downing Street. A political Cabinet without civil servants will take place this morning before a standard Cabinet this afternoon

The customs union plan proposed by Ken Clarke last night was closest to victory – losing by just three votes 276 to 273. A second referendum got the most votes overall for a second week, with 280 votes to 292 against.

Tory MP Nick Boles sensationally resigned from his party after his plan for a Norway-style soft Brexit was defeated 282 to 261 – having won just 33 Tory votes.

An SNP-inspired plan to revoke Article 50 to avoid No Deal was the most heavily defeated. It lost 292 to 191.

Theresa May has ordered her ministers to gather in Downing Street for a five-hour epic from 9am today with just nine days until a final EU summit on April 10.

The Prime Minister must try to set a course that can be concluded before the new exit day on April 12. Mrs May knows if she pivots toward a soft Brexit, she risks losing Brexiteer ministers from her Cabinet.

She also knows if she refuses to move toward MPs and heads for a No Deal Brexit she will use a raft of Remainers ministers.

The impasse has fuelled speculation today’s Cabinet could see Britain spiralling towards a General Election. The first three hours of discussion will be without civil servants – meaning party politics and elections will be top of the agenda.

Today: The Cabinet will meet to discuss a response to the votes. If MPs have backed a customs union, Mrs May will have to decide whether to accept a policy opposed by the vast majority of Tory MPs. If she agrees, the issue could tear the party apart. If she refuses, it would result in a constitutional stand-off that could spark an election. Downing Street fears that she could face a Cabinet walkout regardless of what she decides. 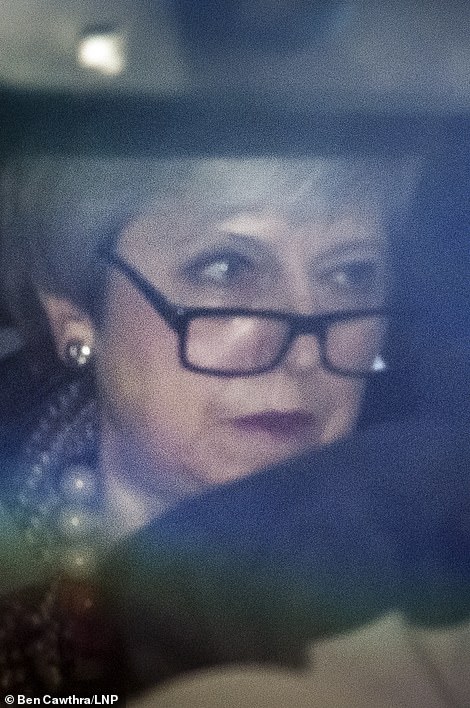 Wednesday: Sir Oliver Letwin has indicated he will try to seize control of the Commons agenda again to pursue his soft Brexit plan. If Monday’s votes were inconclusive, they could be held again, possibly using preferential voting to reduce the options to one. If Monday night’s vote produced a solution, but Mrs May refused to adopt it, Parliament could legislate in a bid to force her hand.

Thursday: Allies of the PM have the day pencilled in for a possible fourth attempt to get her deal through the Commons. They believe that, with the majority against her coming down from 230 to 149 then to 58 last week, they have momentum on their side. Ministers are considering an unprecedented parliamentary ‘run off’ pitting Mrs May’s deal against the soft Brexit option chosen by MPs in the hope of focusing the minds of Tory eurosceptics.

What will the EU do next?

An emergency summit will be held on April 10. Britain can use this to ask for a longer delay to Brexit – perhaps to the end of the year or even longer.

Mrs May has told MPs a long delay will mean holding European Parliament elections on May 22.

Mrs May is ploughing on for now. Downing Street is insistent the deal remains the best way of securing an orderly Brexit and appears set on another vote at some point.

No 10 may now consider whether to call a snap general election if MPs try to pass laws to force May to pursue their option next week.

Will May go for a long extension or No Deal?

Nobody knows for certain. The Prime Minister has publicly ruled out personally going for a long extension but also admitted Parliament will rule out No Deal.

Will May resign now her deal has failed again?

Again, nobody knows for sure. Her announcement on Wednesday night that she would stand down was contingent on the deal passing.

In practice, it drained Mrs May of all remaining political capital. Most in Westminster think her Premiership is over within weeks at the latest.

As her deal folded for a third time on Friday, she faced immediate calls from Labour leader Jeremy Corbyn so stand down with instant effect.

What is clear is there is already a fight underway for the Tory leadership.

Does is all mean there will be an election?

Probably, at some point. The Commons is deadlocked and the Government has no functional majority. While the Fixed Term Parliaments Act means the Government can stumble on, it will become increasingly powerless.

Mrs May could try to call one herself or, assuming she stands down, her successor could do so.

Would May lead the Tories into an early election?

Unlikely. Having admitted to her party she would go if the deal passes, Mrs May’s political career is doomed.

While there is no procedural way to remove her, a withdrawal of political support from the Cabinet or Tory HQ would probably finish her even if she wanted to stay.

How is an election called? When would it be?

Because of the Fixed Term Parliaments Act passed by the coalition, the Prime Minister can no longer simply ask the Queen to dissolve the Commons and call an election. There are two procedures instead.

First – and this is what happened in 2017 – the Government can table a motion in the Commons calling for an early election. Crucially, this can only pass with a two-thirds majority of MPs – meaning either of the main parties can block it.

Second an election is called if the Government loses a vote of no confidence and no new administration can be built within 14 days.

In practice, this is can only happen if Tory rebels vote with Mr Corbyn – a move that would end the career of any Conservative MP who took the step.

An election takes a bare minimum of five weeks from start to finish and it would take a week or two to get to the shut down of Parliament, known as dissolution – putting the earliest possible polling day around mid to late May.

If the Tories hold a leadership election first it probably pushes any election out to late June at the earliest.

Why do people say there has to be an election?

The question of whether to call an election finally reached the Cabinet last week.

Brexit Secretary Stephen Barclay warned the rejection of Mrs May’s deal would set in train a series of events that will lead to a softer Brexit – meaning an election because so many MPs will have to break manifesto promises.

MPs voting to seize control of Brexit from ministers has only fuelldd the demands.

Labour has been calling for a new vote for months, insisting the Government has failed to deliver Brexit.

Mr Corbyn called a vote of no confidence in the Government in January insisting the failure of the first meaningful vote showed Mrs May’s administration was doomed. He lost but the calls did not go away.

Brexiteers have joined the demands in recent days as Parliament wrestles with Brexit and amid fears among hardliners promises made by both main parties at the last election will be broken – specifically on leaving the Customs Union and Single Market.

Tory MP Andrew Bridgen wants Mrs May replaced with a Brexiteer. He believes it would push Remain Tories out of the party and then allow a snap election with more Eurosceptic candidates wearing blue rosettes.

Both main parties will have to write a manifesto – including a position on Brexit. Both parties are deeply split – in many cases between individual MPs and their local activists.

Under Mrs May, the Tories presumably try to start with the deal. But it is loathed by dozens of current Tory MPs who want a harder Brexit and hated even more by grassroots Tory members.

Shifting Tory policy on Brexit to the right would alienate the majority of current MPs who voted to Remain.

Labour has similar splits. Many of Labour’s MPs and activists want Mr Corbyn to commit to putting Brexit to a second referendum – most with a view to cancelling it.

Mr Corbyn is a veteran Eurosceptic and millions of people who voted Leave in 2016 backed Labour in 2017.

The splits set the stage for a bitter and chaotic election. The outcome is highly unpredictable – the Tories start in front but are probably more divided on the main question facing the country.

Labour is behind but knows it made dramatic gains in the polls in the last election with its promises of vastly higher public spending.

Neither side can forecast what impact new political forces might wield over the election or how any public anger over the Brexit stalemate could play out.

It could swing the result in favour of one of the main parties or a new force.

Or an election campaign that takes months, costs millions of pounds could still end up in a hung Parliament and continued stalemate. This is the current forecast by polling expert Sir John Curtice.