A university student who suffered with severe acne revealed how she saw dramatic improvements in just four weeks after using a £12.95 natural serum.

Ellie Smith, 21, from Canterbury, Kent, first developed teen acne when she was 15 but as time progressed, it became increasingly aggressive to the point it was constantly red, sore and painful to touch.

After trying several products available on the market along with antibiotics prescribed by the doctors, Ellie eventually found the answer in an unlikely solution – a natural serum.

‘I would say the improvements have been at least as good as the acne medications I have taken in the past but without any negative side effects,’ said Ellie, who is in a relationship with partner Ryan, 20, a Leisure Centre Manager. 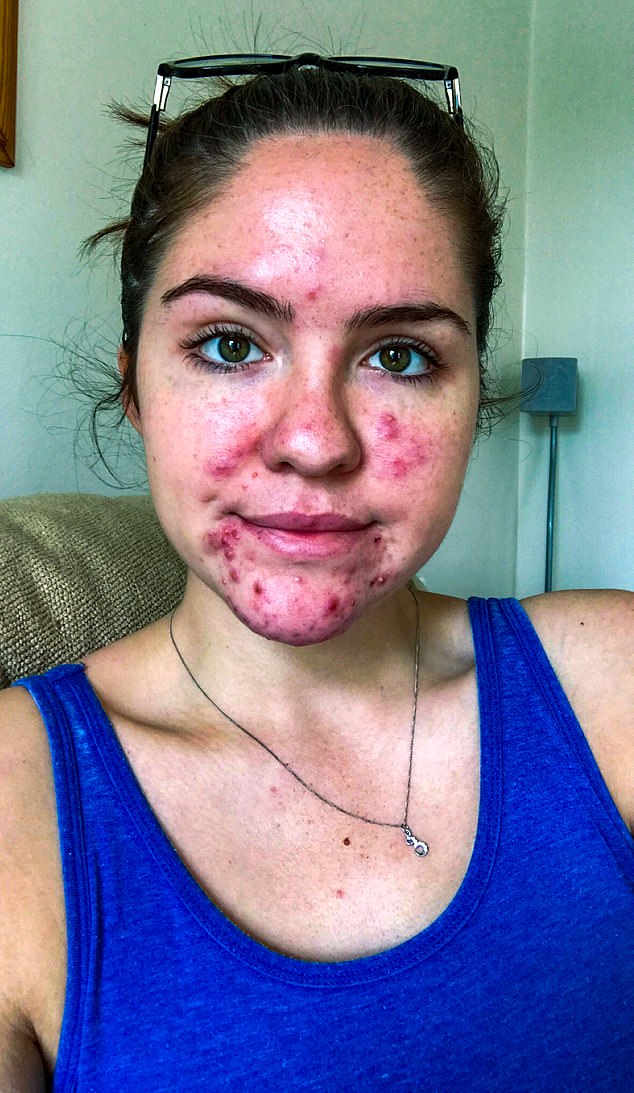 Ellie Smith, 21, from Canterbury, Kent, developed severe cystic acne by the time she was 20 and said: ‘My face was constantly red and sore and very painful to even touch.’ Above, the student in December 2018 before using the product 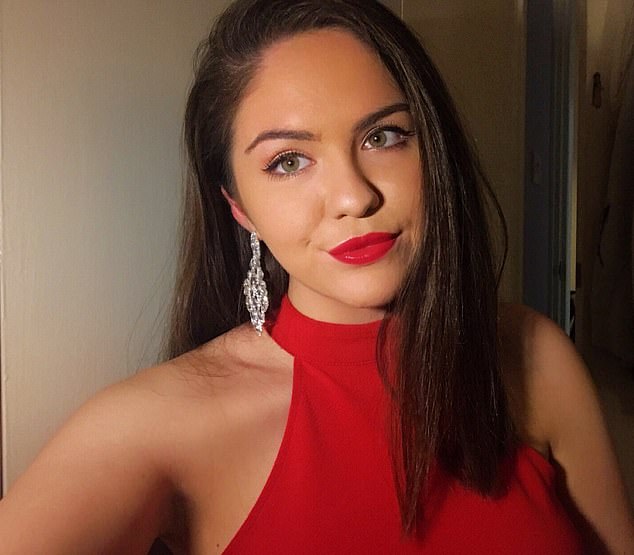 The university student saw visible improvements after just four weeks and two months on, pictured above, her complexion is a lot smoother. ‘It makes applying makeup easier and less stress-free and I don’t have to wear half as much as I did before,’ explained Ellie

Speaking of the first time the symptoms developed, the student explained: ‘I got acne like any other teenager when I was 15. But while everyone else’s skin started to clear up by the time we took A-levels, mine just got worse and worse.

By the time she reached 20 and had started university, Ellie’s normal teen acne had turned into severe cystic acne.

‘My face was constantly red and sore and very painful to even touch,’ she explained. ‘I went from wearing not much make-up at all even when I went out to feeling like I had to wear full coverage make-up all the time, even to pop down to the shops.’

Ellie first went to the doctors about her acne at the end of 2016 when it was beginning to affect her confidence. 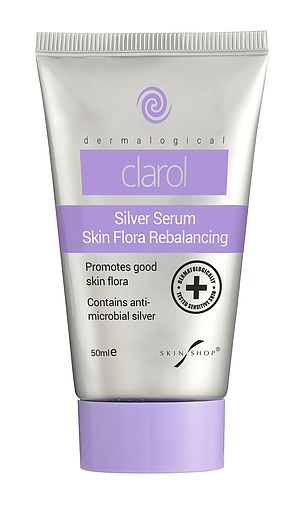 The Silver Serum Skin Flora Re-Balancing Serum from Clarol (above) retails at £12.95 and is available from www.clarol.co.uk

‘I felt self-conscious of the cysts that had started to form under my skin,’ said Ellie, who has since praised Clarol’s Silver Serum Skin Flora Re-Balancing.

‘When I went out with friends I used to think everyone was looking at my face.’

‘No one ever said anything, but I was always nervous people were looking or saying something about it.’

Ellie was first prescribed a cream called Duac, which she claimed helped a little bit, but she didn’t feel as though it was making much difference to the bigger spots which had started to form and spread particularly across her cheeks.

‘With little improvement in my skin, I went back to the doctor and in 2017 I was prescribed Lymecycline antibiotics which did help and my skin really improved,’ said Ellie.

‘However, as soon as I finished the course, the acne came back with vengeance.

‘I took several courses of antibiotics between 2017 and 2018 but each time the acne came back again worse than before.’

In 2018, Ellie was given Epiduo to take alongside Lymecycline, which she admitted worked well compared to combined medications.

‘But despite this I didn’t feel like I’d found a solution as I knew within a few weeks of stopping the medications my acne would be back,’ explained the student. 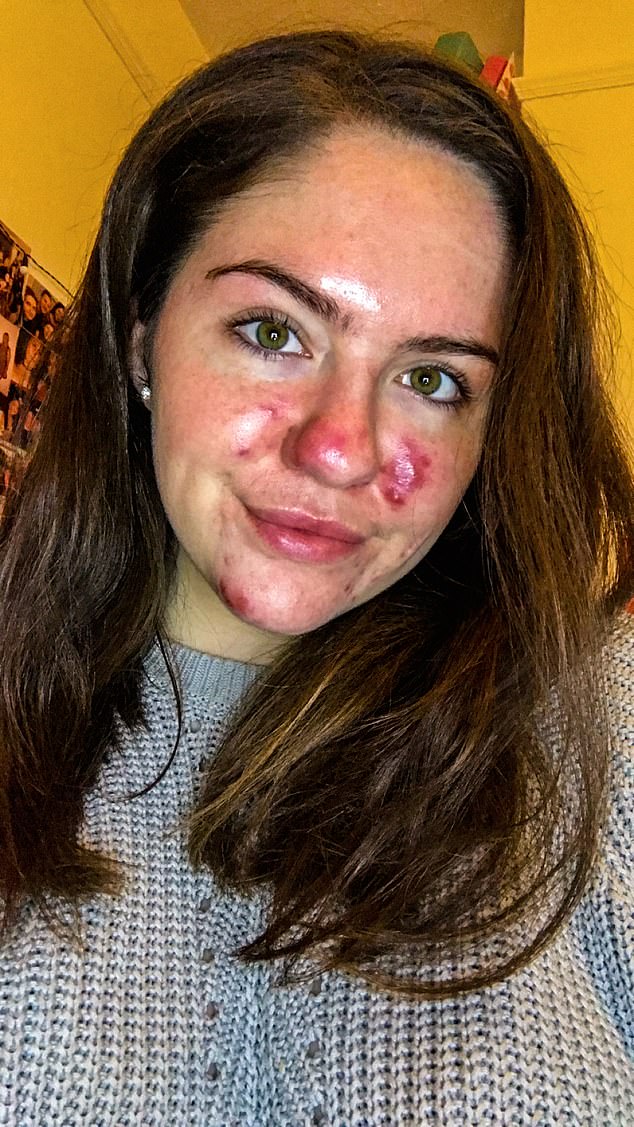 Ellie became so self-conscious about her cystic acne that she didn’t want to go on nights out because her make-up never sat right on her acne. Above, the student in December 2018 – before using the product 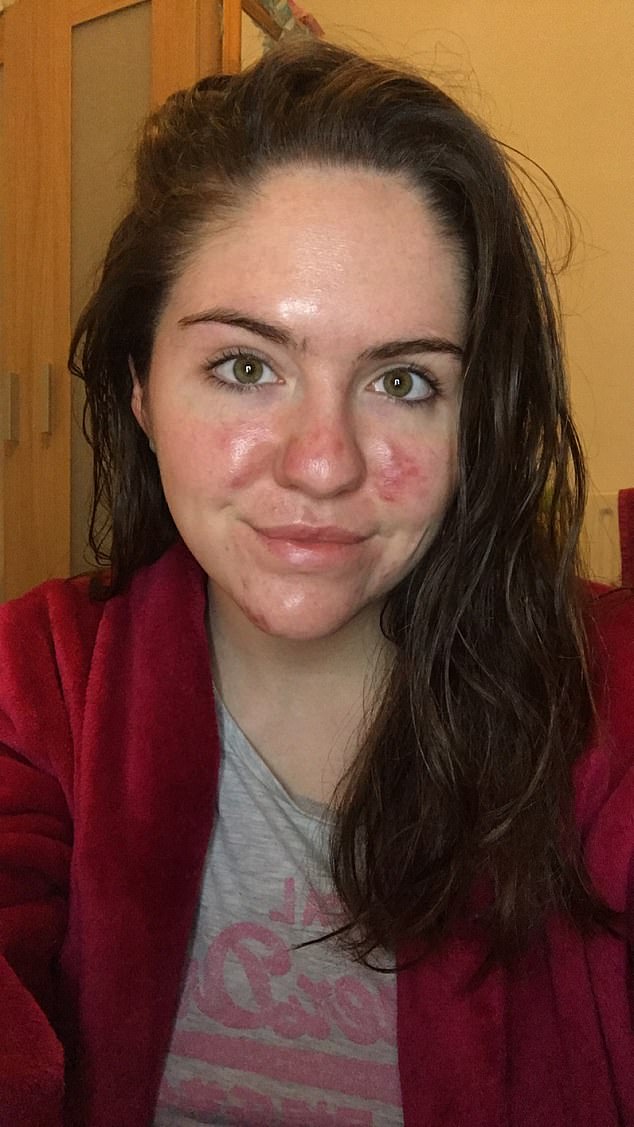 Not wanting to take frequent antibiotics for a long period of time, Ellie tried the £12.95 miracle product – and hasn’t looked back since. Pictured, Ellie’s skin saw dramatic improvements after four weeks of using Clarol

She added: ‘I also didn’t want to get into a cycle of taking frequent antibiotics forever for my skin as this isn’t good for your general health. So at the end of last year I decided to come off both medications.’

Ellie met her boyfriend Ryan when her cystic acne was at its worst, after coming off a course of antibiotics last year.

‘Since day one he didn’t make me feel self-conscious about my acne and was very sympathetic, which has helped my confidence a lot,’ she said. ‘My need to get rid of my acne was for me personally not because of anyone else.’

She continued: ‘It’s awful to live with and is very uncomfortable. I don’t think other people realise how painful it can be.’ 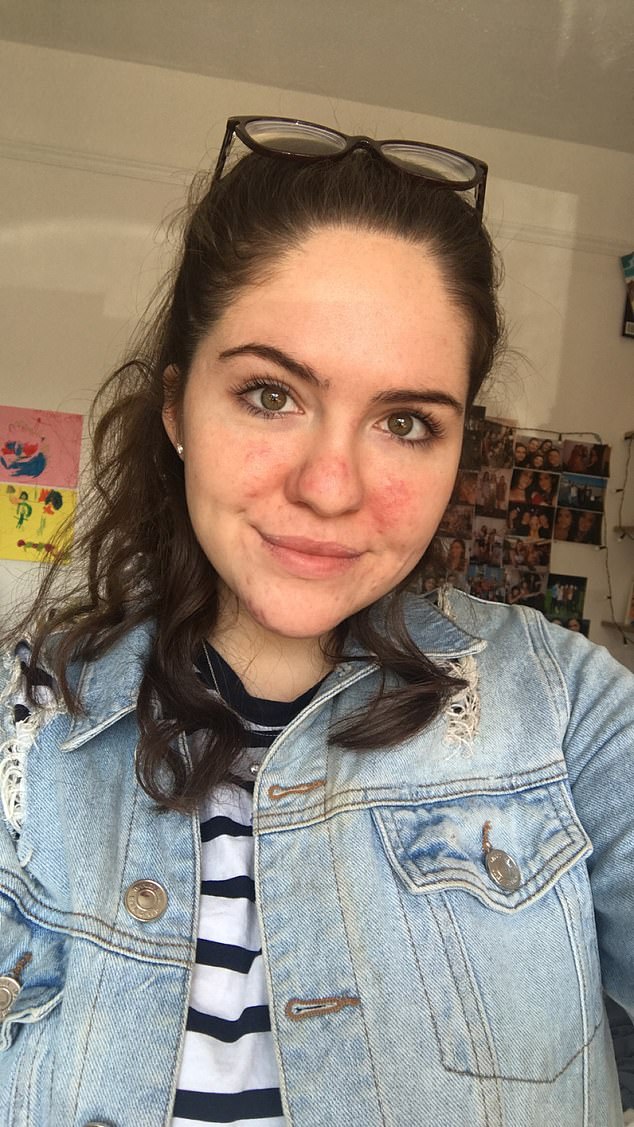 Speaking of her experience with cystic acne, Ellie revealed: ‘it’s awful to live with and is very uncomfortable. I don’t think other people realise how painful it can be.’ Above, Ellie now

And even with Ryan’s support, Ellie still felt like she had to wear thick makeup wherever she went.

‘Sometimes I’d feel I didn’t want to go on nights out because my make-up never sat right on my acne,’ she said.

How does Silver serum work?

– Silver Serum is designed to remain active on the skin for several hours after application, so keeping acne lesions constantly guarded against becoming populated with bad skin bacteria

– MicroSilver ™ has been found in two studies to reduce inflammation and infection in skin lesions.

– In a longer trial involving patients with severe skin infection, 93% were able to come off other medicated treatments after applying MicroSilver ™ to their infected skin

‘I would get frustrated when getting ready and sometimes just not go out. I would always try and edit photos where you could see my acne because I didn’t want anyone to see it.’

Towards the end of last year, Ellie was finally referred to a dermatologist.

‘I was told that my acne was fairly severe and I was given a leaflet for Roaccutane, which I had read about before, but was not keen on taking due to the side effects, especially as it has been linked to depression,’ Ellie explained.

‘If I took Roaccutane I was told I’d have to go back to the dermatologist every month to have tests to see if I could stay on the medication, which was hard for me as I was at university; it also made me realise for real how strong this medication was.’

Having decided not to take Roaccutane, there weren’t many other options that were offered to Ellie.

‘After all the doctors I had seen, it was eventually my mum who helped me the most,’ Ellie explained. ‘At the start of this year she sent me an article she had read in one of her magazines about a woman in a similar position to me whose acne had been hugely helped by a product called Silver Serum Skin Flora Re-Balancing by a UK acne brand called Clarol.’ 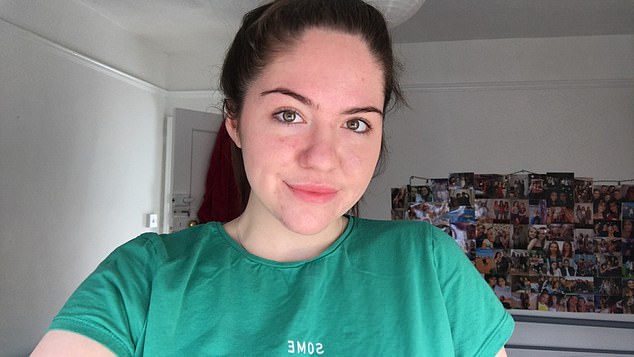 While Ellie’s acne hasn’t completely cleared up and she still gets surface spots, the deeper live cystic acne has vastly improved. Pictured, Ellie in recent weeks 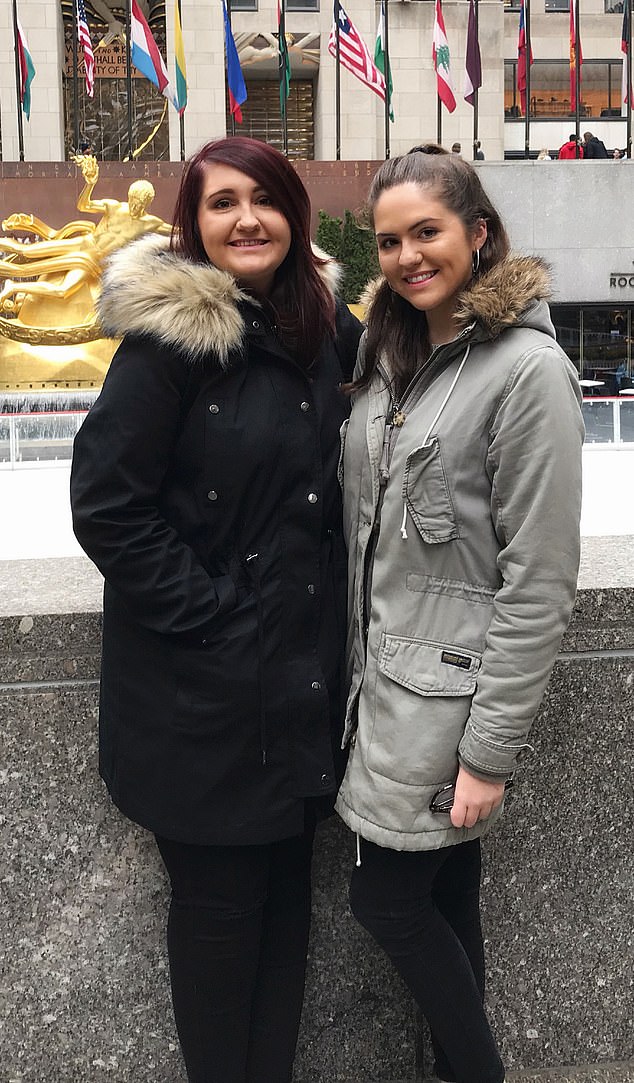 The student is delighted with the results and said: ‘I feel I’ve finally found something that helps me stay in control of my own skin.’ Above, Ellie and her sister in New York in April 2019

She continued: ‘I could tell her story was real from what she said, much of which I could totally relate to. The product wasn’t medicated so I felt I had nothing to lose by trying it.’

Ellie was disappointed at first as her skin got worse in the first few weeks, but after researching the product and finding blogs and reviews by other acne sufferers, she realised she just had to be patient.

‘I had come off my last course of antibiotics at the end of last year so I was in exactly that position,’ she said. ‘My acne was really bad and I was expecting a lot as I was so desperate for something to work. Whenever you try new treatments, you just want them to work immediately.’

The student continued with the serum for a month and sure enough, after about four weeks her skin started to feel smoother and her live acne started to reduce.

‘The first really significant change I noticed was that the cystic lumps under the skin started to reduce dramatically in size and were much less painful,’ explained Ellie. ‘The surface spots were still there but the underlying cysts were starting to get smaller and there were fewer live ones emerging.’

She continued: ‘Two months on and my complexion is a lot smoother, which makes applying makeup easier and less stress-free and I don’t have to wear half as much as I did before.’

‘My acne hasn’t completely cleared up and I still get surface spots but the deeper live cystic acne is vastly improved and my skin is much less painful and less red and swollen.’

Ellie revealed that the main difference with this product is the fact she can keep on using it every day for as long as she needs to, and doesn’t fear the horrendous return of her acne like when she finishes a course of antibiotics.

‘I feel I’ve finally found something that helps me stay in control of my own skin,’ said Ellie. ‘My friends have really noticed the difference. The fact that they are mentioning my skin really shows its positive effect on me as normally I think they kept off the subject.’