Theresa May is holding a marathon Cabinet session to try and break the Brexit deadlock, as EU chief negotiator Michel Barnier said a no-deal withdrawal was becoming more likely by the day.

The Prime Minister is gathering her top team for crisis talks in Downing Street after MPs again failed to find a majority for a series of alternatives to her Brexit deal.

A call for a customs union with the EU was rejected by just three votes, while a demand for a second referendum was defeated by 12 and a Norway-style deal put forward by Nick Boles by 21.

Mr Barnier said the UK now had two options, quit the EU without a deal, or seek an extension to Article 50.

Speaking in Brussels, Mr Barnier said: ‘If the UK Parliament does not vote in favour of the Withdrawal Agreement in the coming days only two options would remain.

‘Leaving without an agreement or requesting a longer extension of the Article 50 period.’ 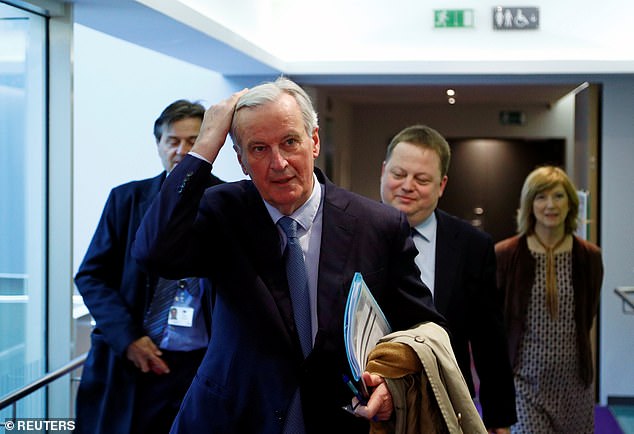 Mr Barnier said the UK now had two options, quit the EU without a deal, or seek an extension to Article 50.

Speaking in Brussels, Mr Barnier said: ‘If the UK Parliament does not vote in favour of the Withdrawal Agreement in the coming days only two options would remain.

‘Leaving without an agreement or requesting a longer extension of the Article 50 period.’

Today: The Cabinet will meet to discuss a response to the votes. If MPs have backed a customs union, Mrs May will have to decide whether to accept a policy opposed by the vast majority of Tory MPs. If she agrees, the issue could tear the party apart. If she refuses, it would result in a constitutional stand-off that could spark an election. Downing Street fears that she could face a Cabinet walkout regardless of what she decides.

Wednesday: Sir Oliver Letwin has indicated he will try to seize control of the Commons agenda again to pursue his soft Brexit plan. If Monday’s votes were inconclusive, they could be held again, possibly using preferential voting to reduce the options to one. If Monday night’s vote produced a solution, but Mrs May refused to adopt it, Parliament could legislate in a bid to force her hand.

Thursday: Allies of the PM have the day pencilled in for a possible fourth attempt to get her deal through the Commons. They believe that, with the majority against her coming down from 230 to 149 then to 58 last week, they have momentum on their side. Ministers are considering an unprecedented parliamentary ‘run off’ pitting Mrs May’s deal against the soft Brexit option chosen by MPs in the hope of focusing the minds of Tory eurosceptics.

He added: ‘No deal was never our desired or intended scenario.

‘But the EU is now prepared.’

He said no deal ‘becomes day after day more likely’.

Mr Barnier said: ‘The UK may ask for another extension. Such an extension would carry significant risks for the EU.

‘Therefore a strong justification would be needed.

‘We have always said that we can accept a customs union, or relationship along the style of the Norway model.

‘In fact, however, the Political Declaration today can accommodate all of these options already.

‘It leaves the door open for a variety of outcomes.

‘But if the UK so wishes we are ready to rework the Political Declaration.’

The comments came after a dramatic day in the Commons which saw Mr Boles declare that he would no longer sit as a Conservative MP as he blamed the party for refusing to compromise on a means of leaving the European Union.

Cabinet is meeting on Tuesday for five hours to thrash out a way forward.

The first three hours will be without civil servants, fuelling speculation the senior Tories could use the time to consider a snap election, the timing of the Prime Minister’s exit from office or to air the bitter grievances between the Leave and Remain wings of the ministerial team.

The failure of any option to gain a majority in the Commons left the UK no clearer about its direction with the prospect of a no-deal Brexit on April 12.

Brexit Secretary Stephen Barclay told MPs that if they wanted to secure a further delay from the European Union, the Government must be able to put forward a ‘credible proposition’ as to what it would do. 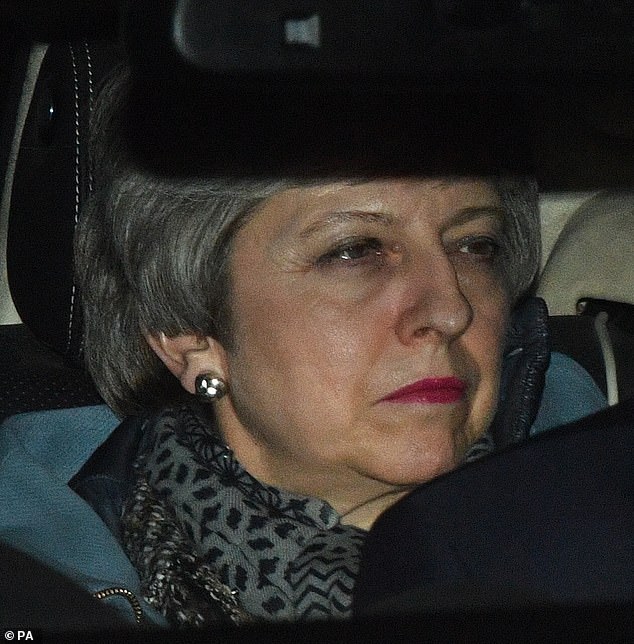 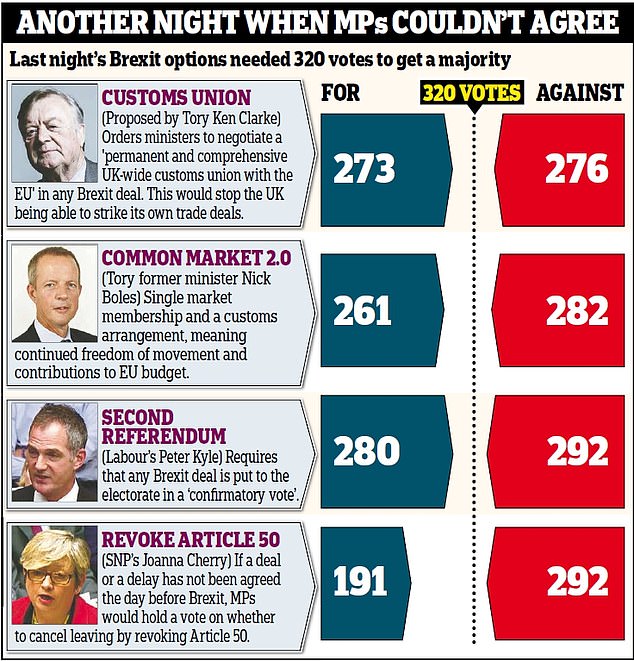 But he held out the prospect of leaving with a deal next month – as long as MPs back one.

He said: ‘If the House were to agree a deal this week, it may still be possible to avoid holding European Parliamentary elections.’

Secretary of State for Health and Social Care Matt Hancock pleaded with MPs to back the Prime Minister’s deal ‘and deliver Brexit’.

He suggested that Wednesday, when MPs may have a third attempt at reaching a majority, was the ‘last chance to break the deadlock or face the abyss’.

After a debate disrupted by semi-naked climate change protesters in the public gallery, ‘indicative votes’ were again held in an attempt to establish what outcome might have majority support among MPs following a similar process last week.

MPs have control of proceedings in the Commons for a third time on Wednesday, but Speaker John Bercow said it was not yet clear what debates and votes will be staged.

The mastermind of the plan, Conservative former minister Sir Oliver Letwin, is expected to set out his proposals on Tuesday.

Announcing his decision to quit the Tory benches, Mr Boles said he would now sit as an independent progressive conservative.

‘The Conservative Party has shown itself to be incapable of compromise,’ he said.