A comedian who is leading the race to become ‘s next president is being accused of having an advantage in his campaign due to his ties with a billionaire oligarch.

Volodymyr Zelenskiy surging ahead in the presidency race thanks to an insurgent campaign that rails against corrupt politicians influenced by rich oligarchs.

But one of Ukraine’s most popular TV channels 1+1, owned by oligarch Ihor Kolomoisky, has given Zelenskiy a lot of air time during his campaign. 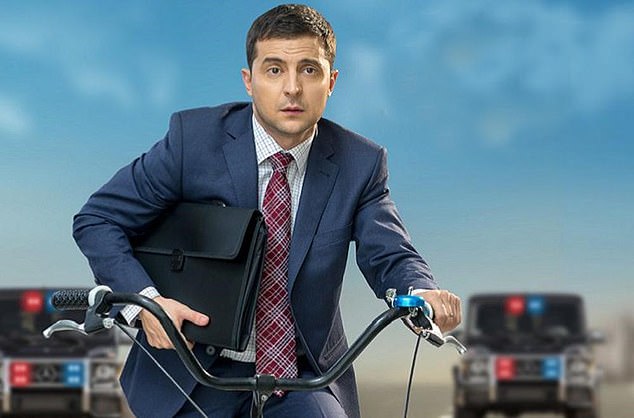 Comedian Volodymyr Zelenskiy surging ahead in the Ukrainian presidency race

1+1 filled its schedule with back-to-back shows by the comedian and actor on Saturday, just a day before Zelenskiy won the first round of the presidential contest.

Some investors, voters, and political opponents claim that the comedian is in  Kolomoisky’s pocket.

Both Zelenskiy and Kolomoisky say their relationship is strictly professional, and centred on the comedian’s TV work.

Both say no undue influence is being exerted by the oligarch, whose businesses range from banking and energy to aviation.

‘I’m more his puppet than he is mine,’ Kolomoisky said last year.

‘It is impossible to influence me,’ Zelenskiy told the news website Gordon in December. ‘Neither Kolomoisky, nor any other oligarch, no one will influence me.’

Zelenskiy said last month he was in the process of exiting all his businesses, which includes the production company whose shows run on 1+1.

Asked whether the relationship was a weak spot for him, Zelenskiy told Reuters: ‘We are working according to TV contracts and it is fine. It is business.’

However President Poroshenko has sought to make political capital out of the connection between the two men as he fights to make up ground to the comedian before the run-off vote on April 21.

‘In the past few weeks my opponents have poured on me rivers of shameless lies. The main source of these lies in recent months – deplorable as it may be – has been 1+1. 1+1 has turned into the obedient implementer of the political assignments of its owner,’ Poroshenko said. 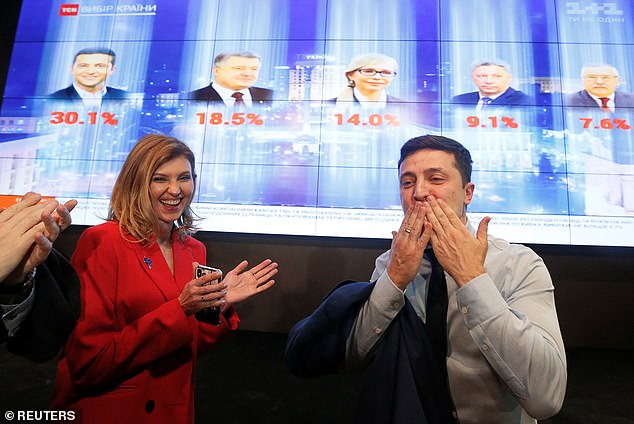 One of Ukraine’s most popular TV channels 1+1 is owned by Ihor Kolomoisky. 1+1 has given Zelenskiy a lot of air time over the past few months. Zelenskiy is pictured reacting following the announcement of the first exit poll in a presidential election 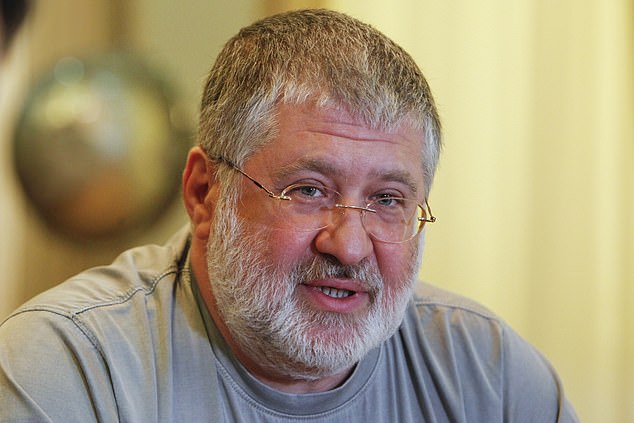 Some investors, voters, and political opponents claim that the comedian is in Kolomoisky’s pocket. The billionaire is pictured

Kolomoisky is motivated by a desire for revenge against the state,’ he wrote on Twitter.

On Saturday, the channel’s Zelenskiy-themed schedule included shows where he and fellow actors performed jokes, sketches and songs, and a documentary voiced by Zelenskiy about Ronald Reagan, a popular actor who became U.S. president.

Poroshenko is part of the same wealthy elite as Kolomoisky, having made a fortune from confectionery that earned him the sobriquet of ‘Chocolate King’.

‘The strategic dilemma will be what do you prefer, an oligarch or someone possibly controlled by an oligarch, the puppet or a puppeteer?’ said regional analyst and political consultant Radu Magdin.

Kolomoisky makes no secret of his dislike for Poroshenko, and the two have clashed repeatedly over issues that threatened Kolomoisky’s businesses.

No hard evidence has been presented by any of Zelenskiy’s opponents that Kolomoisky is spearheading the comedian’s Presidential campaign.

Ties between the two men have led some political analysts and Western diplomats to question how zealously Zelenskiy would try to implement reforms needed to speed up economic growth and keep foreign aid flowing if they clashed with Kolomoisky’s interests.

Zelenskiy’s campaign has been propelled by his TV show, Servant of the People, where he plays a scrupulously honest history schoolteacher who becomes president by accident.