John Bercow ruled rebel MPs can try to push through laws to block No Deal in a single day today despite Brexiteer fury at the ‘reprehensible’ plot.

Labour MP Yvette Cooper has published draft laws that would oblige the Government to seek a long deal to next week if there is not a deal by April 10.

She wants to use Commons time grabbed by Tory rebel Oliver Letwin tomorrow to ram the law through the Commons in a matter of hours.

Veteran Brexiteer Sir Bill Cash complained the idea was ‘unconstitutional’ today and urged the Commons Speaker to block it.

But Mr Bercow told him pushing through laws in a single day was ‘not particularly unusual’ in itself, pointing out the Government does so in an emergency.

The Speaker has repeatedly been accused of helping Remainers to frustrate Brexit and has threatened to block any further votes on Mrs May’s Brexit deal. 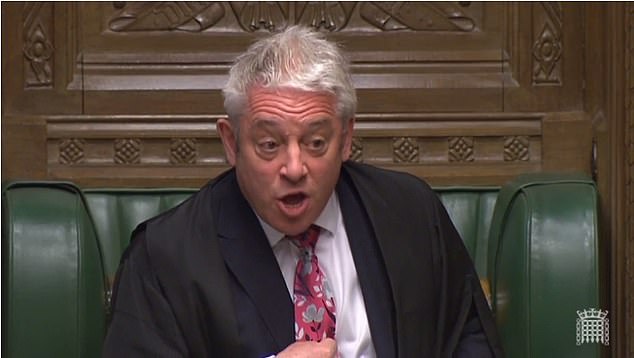 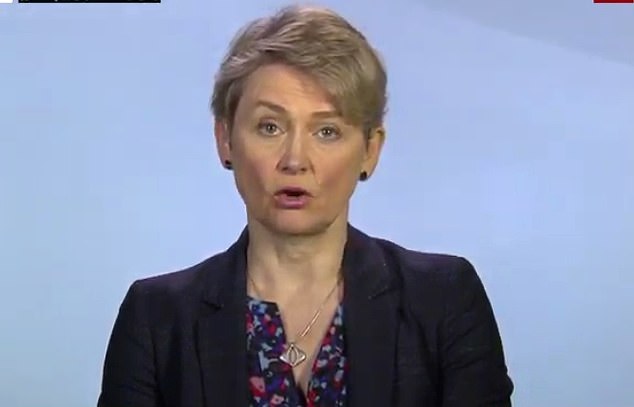 The procedure has been used in recent months to pass laws relating to Northern Ireland, which does not currently have functioning devolution.

The rebels will only be able to push through their draft law in a day if they have a majority of MPs on their side. The House of Lords can still block the law even if they pass it in the Commons.

After Ms Cooper published her two-clause Bill today, Sir Bill, chairman of the European Scrutiny Committee, said he had ‘grave concerns’ about the idea of a bill ‘effectively being rammed through in one day’.

Sir Bill said: ‘This is a reprehensible procedure in the context of this vitally important issue of our leaving the European Union. It is unconstitutional.

‘It is inconceivable that we should be presented with a bill which could be rammed through in one day.’

Mr Bercow said: ‘I rather imagine anyone within a 50-mile radius of this place would be aware of your views on this important matter given the force and frequency with which you have raised them.

‘The House voted to give precedence tomorrow to a business of the House motion which has not yet been tabled. So we await that.

‘Although this is an unusual state of affairs, it is not unknown for a bill to be pushed through the House in one day.

‘Bills being brought forward and taken through their various stages in one day in Government time are not particularly unusual at all.’ 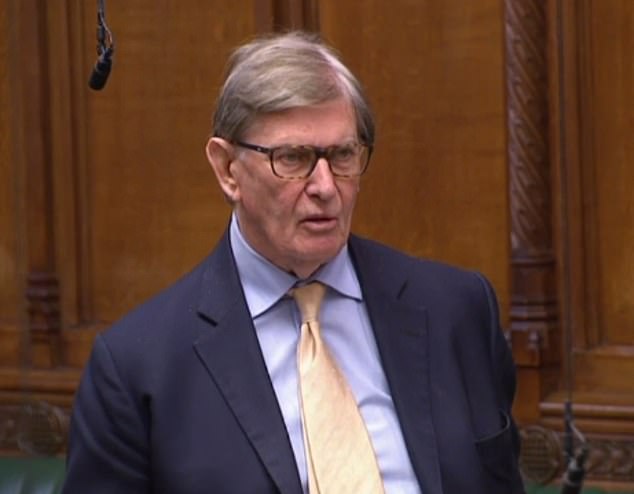 After publishing her Bill today, Ms Cooper warned MPs are playing a ‘dangerous game of brinkmanship’ with the country’s future.

The former Labour minister warned that politicians were ‘running out of time’ after she tabled a new bill that would force Theresa May to ask the EU for another extension to Article 50 if her deal fails to pass first.

It came as rebels seemed to have abandoned hopes of holding a third round of so-called indicative votes on Wednesday, after two previous votes on Brexit alternatives chosen by backbenchers ended in deadlock.

‘We are all running out of time. There is only 10 days until the danger is we crash out with no deal at all,’ Ms Cooper told Sky News.

‘We have been trying to condense into two days what should really have been done by the Prime Minister two years ago.

‘There is too much of a game of brinkmanship going on, everyone just wants to leave this until the final couple of hours and hope that someone else blinks first.

‘That is a really dangerous way to make decisions, it’s a really high-risk game with the future of the country.’

Why is John Bercow a controversial Speaker? 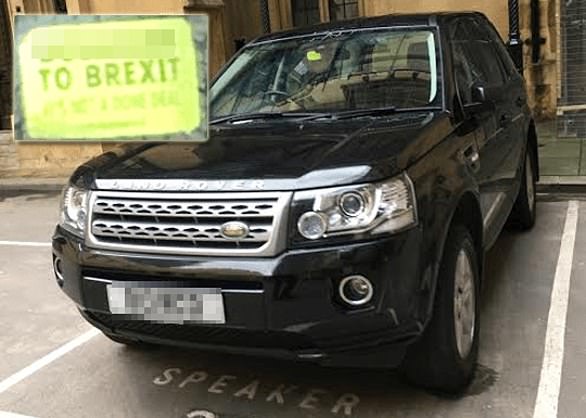 A ‘Boll**** to Brexit’ sticker can be clearly seen in photographs of Mr Bercow’s black 4×4, which has a personalised numberplate

Brexit bias: John Bercow has revealed publicly that he voted for Remain in 2016, fuelling claims by Brexiteers he is trying to frustrate Brexit in the Commons.

The claims were fuelled by an anti-Brexit sticker being spotted in a black Land Rover parked outside Mr Bercow’s Commons home – he has insisted the car and sticker belongs to his wife.

Brexiteers were furious last week when he refused to accept an amendment that sought to rule out a second referendum on Brexit.

It added to complaints through much of the two-and-a-half years since the referendum that he has sought to boost pro-EU supporters such as Dominic Grieve and Ken Clarke at the expense of Brexiteers.

Bullying claims: John Bercow has been hit by a number of bullying claims. He is said to have subjected staff to angry outbursts for years, mocking junior officials and leaving staff ‘terrified’.

A former private secretary Kate Emms has said she was left with PTSD after working for him.

Mr Bercow denies all the allegations.

His wife Sally: Sally Bercow has courted controversy since her husband was first elected. She infamously posed in a sheet for a magazine interview soon after Mr Bercow was first elected and she took part in Celebrity Big Brother.

In 2015 it emerged Sally had an affair with Mr Bercow’s cousin Alan – even leading the couple to move into the family home in Battersea while the Speaker stayed in his grace-and-favour apartment in Parliament.

Mr Bercow and his family live rent-free in an opulent apartment at parliament, where the taxpayer foots a £109 a month bill for the Arsenal fan’s Sky subscription.

Bias against the Tories: Conservative ministers and MPs have long-complained Mr Bercow favours Labour. He repeatedly hauls ministers to the Commons to answer Urgent Questions and Emergency Debates – far more often than has historically been the case.

He frequently reprimands ministers, often sarcastically, and his behaviour prompted the Cameron Government to launch a near-unprecedented attempt to remove him in 2015.

Mr Bercow provoked further fury by speaking out against Donald Trump and Brexit in defiance of protocol demanding he be impartial.

Katie Price 'will be given official police summons for breaking her driving ban'
World’s first portable lavatory cleaning robot is being sold online for $500
Mother claims she took her daughter to the GP FIVE TIMES before she was diagnosed with leukaemia
Actress Sheila Steafel dies aged 84 after bravely battling leukemia
Nebraska teacher is left in tears after his students chip in more than $100 to buy him Nike sneakers
Boris Johnson vows UK will NOT align with Brussels trade rules
Italy's schools will not reopen until September, PM announces
Boris Johnson faces unlockdown muddle as the Tories call for more freedoms